Thanks for pointing this out!
J

Upgrades, especially big upgrades to systems engineers can't perform real life tests on are prone errors, especially when a lot of software is involved. These systems have seen major capability increases along many dimensions at once:

- resolution in sensitivity, space and time domains
- software replacing hardware in many signal acquisition, processing and integration steps
- integration and sharing of many kinds signals and communications both within assets (aircraft, ships, etc) and across them

In the book "Inmates Are Running The Asylum", Alan Cooper recycles the old joke "what do you get when you cross a Computer with an Airplane? (A Computer). He goes on similarly... a camera, a car, a bank... and then 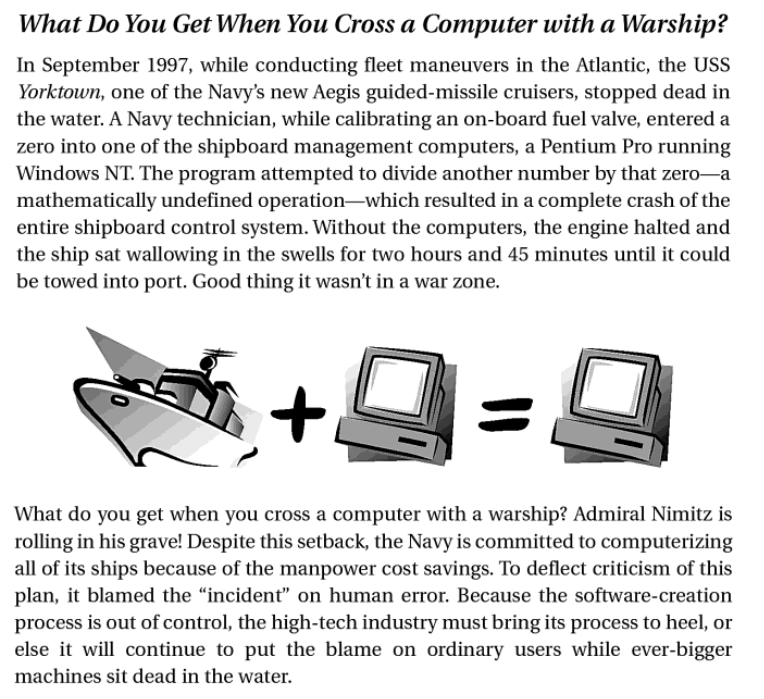 The next question up is "what do you get when you cross newly updated computers with an aircraft carrier battle group?"

Consider also this before leaping directly to aliens:

- huge integration projects are very, very hard and even the top tech companies with all their cash and the best talent in the planet routinely screw up big projects
- the techs at the consoles of the military systems are comfortable with "that's out of my scope" and "need to know"
- the engineers of these systems are compartmentalized to "need to know" scopes
- It may be rare, but there are some techs who are quick to CYA; and more officers
- hacking and electronic sabotage are a thing, and given enough people are involved, something or someone along the vast web of a very complex system is liable to be compromised
- fighter pilots have reported cases of "Physiologic Episodes" for years which only began to drop in F-18s in 2019.
- A bunch of "men in black" (but in civilian clothes) arrived on the ship and spirited away all the evidence. I'm 80/20 they worked for one of the contractors who know there were bugs.
- going forward, we'll always need remember and factor in that the records of millions of people in the government and military were compromised in a Chinese hack not long ago; many of those people are on social media and their relationships and whole life histories are on display
- all of our systems are continuously being probed
- all of the software including operating systems of the major tech companies are in the hands of enemies
- Cyber-security is hard and most people (not just looking at you, Podesta) suck at it.

There are many prosaic explanations that fit Kevin Day's take. After the intelligence and political fiascoes in Afghanistan, and conditioned by the cluster that the joint strike fighter has been, one can have enormous respect for the individuals enlisted, the contractor's engineers and even the intelligence officers at all levels, and still come to the conclusion that the machine as a whole can be blind, prone to false conclusions and failure.
R

As a side note, I agree the "men in black" part of the story is not made up, only that as you said they were probably contractors sent there because data uploading on a satellite link was too slow back in early 2000's.
Last edited: Aug 22, 2021
G

From @IntelWalrus on twitter: "Apparently, in order to periodically calibrate the radar on AEGIS-equipped ships that track ballistic missile threats, cruiser crews release weather balloons with metallic spheres on them that are then tracked at 70,000 feet" (link). It would make sense to calibrate the Princeton's radar after the upgrades to AEGIS and CEC had just been completed, but before the air defense exercises had begun.
You must log in or register to reply here.

A Tear In The Sky - Nimitz/Tic-Tac/Catalina UFO Documentary