I interviewed Kevin Day, regarding the 2004 Nimitz UFO encounters. The audio is not very good and I'll work on a transcript. But I'm putting it up for initial discussion.
S

Hi Mick. I just watched your interview with Kevin Day here. Thanks for looking into this event.

After that interview, have you reconsidered any of your explanations?

I'm still leaning towards an electronic warfare (laser hologram) explanation. I saw that you mentioned this towards the end of the interview, but did not give it much attention. I think it makes sense, but you do have to speculate about a hologram capable of returning radar. Maybe you prefer not to speculate this much, and I understand that. This explanation, in my opinion, is more plausible than an actual craft moving the way it was described. What do you think?

Skeptic_Jim said:
After that interview, have you reconsidered any of your explanations?
Click to expand...


Skeptic_Jim said:
you do have to speculate about a hologram capable of returning radar.
Click to expand...

I wouldn't put this particularly high on the list as an explanation. There does not seem to be any specific evidence that indicated that such a thing is possible now - and even less so in 2004.

It would not account for the groups of 5-10 slow-moving high altitude targets traveling 200+ miles, nor for a close-up visual on a solid object, nor would it appear black in TV mode on the ATFLIR. So really not a good explanation, even if it were possible. 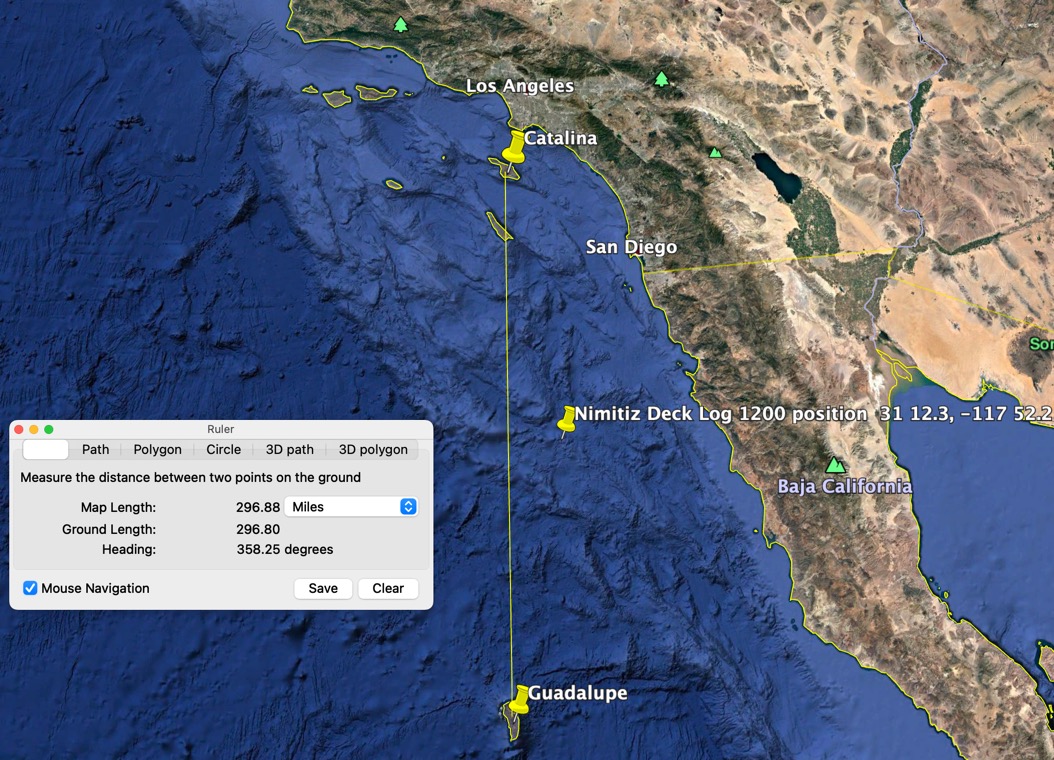 Kevin describes the groups of 5-10 radar returns as moving at 100 knots (115 mph) from Catalina to Guadalupe. This is essentially a due south motion, consistent with his description of the group moving straight down the screen "like snow"

He describes it as moving between them and the land, but based on the Nimitz deck log, that does not seem possible.
S

This was a super interesting conversation. And I hope the ambiguities can be cleared up at some point.

One of the most interesting points is that he said Fravor's intercept target was seen to be moving from the intercept location, to Fravor's cap point, and then back into formation. What was really frustrating though, is that it wasn't clear if Kevid saw that on the radar himself, or what.

When he said he wasn't glued to the console, I would have asked him, if someone else was. And who had actually seen the various maneuvers being performed on radar.

Definitely take him up on his offer to talk again. Can you ask him if he has any contact with "Poison", and whether he would be interested in getting Poison to sit down and talk?

I can undestand pretty well what Mick says, but my English skills are not enough for Kevin Day unfortunately . Looking forward for the transcript, but I understand it's a damn long job, so don't feel pressured, I can live without it

Mauro said:
I can undestand pretty well what Mick says, but my English skills are not enough for Kevin Day unfortunately . Looking forward for the transcript, but I understand it's a damn long job, so don't feel pressured, I can live without it
Click to expand...

I've been editing the AI generated transcript on otter.ai. It's had a first pass now, but won't be 100% accurate. You can see it here:
https://otter.ai/u/0OtR6GhjauIHKJIcAZbs5Qri1vc (synced with audio)

Simulating the Nimitz UFO video as a blurry plane
2