Simulated with completely new developed software designed for structural simulation, this revision of my earlier WTC7 simulation attempt serves as validation case for the software.

New in this simulation compared to the old one:
- Multiple constraints per connection are used to represent individual degrees of freedom (DOF)
- Breaking thresholds are computed from real world parameters
- Correct steel thicknesses and beam dimensions are used
- Plastic deformation is now simulated

While this simulation of World Trade Center 7 is still not 'perfect' it resembles much better the specific characteristics observed in reality than the older model. This simulation confirms mostly the findings of NIST, it is safe to say that the columns 79 to 81 were the first columns which gave way because the removal of other columns led to much different collapses. More than that is hardly determinable, such a system behaves just to chaotic to tell what exact connection failed first. In this regard NIST might be wrong by declaring a specific failure point. However, I consider this not being an important question given the fact how compromised the structure around these three columns must have been exposed to fire for hours, a situation beyond any imaginable safety design specification.

Having said that, I want to emphasize that this video is not intended to prove or disprove 9/11 conspiracy theories. I'm deleting comments that include hate speech, so you better think twice before starting an argument about the reasons of 9/11 here. Instead, I recommend to read a neutral source like: https://en.wikipedia.org/wiki/9/11_co... to get some pros and cons instead of watching YouTube videos.

This is a private project. There are no third parties involved. There is no scientific report available. No peer review has taken place. Thanks for watching.

Content from external source
An impressive project for one individual, Kostock's simulation is an amazing static model of WTC7, and gives a reasonable facsimile of the collapse, given the limitations of what he is doing. 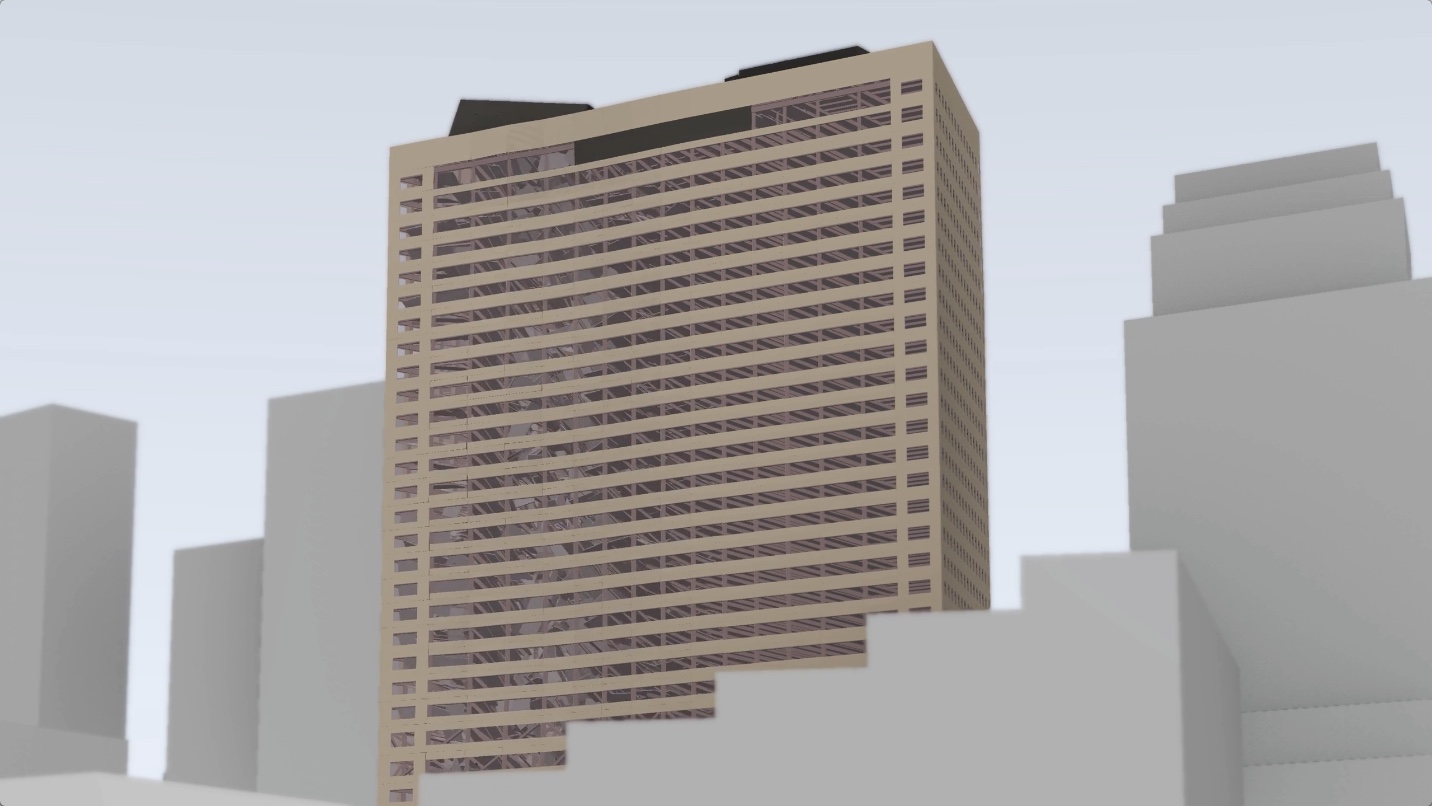 People will surely pounce on the fact that the outer skin does not behave the same as the real event. 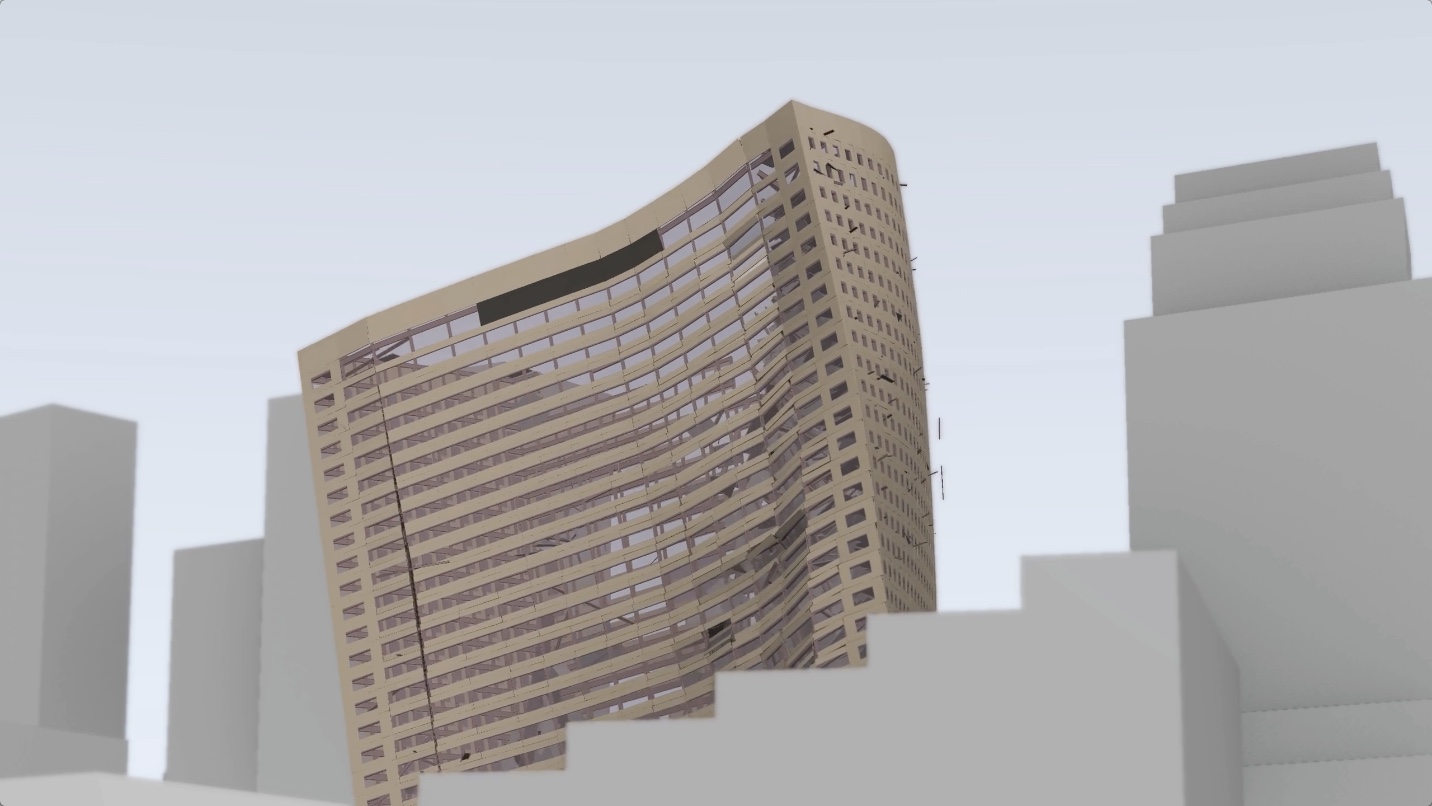 But as with the NIST simulation, this demonstrates an interior collapse followed by the exterior bucking and falling.

It also provides some new viewpoints, that might be helpful perspective. 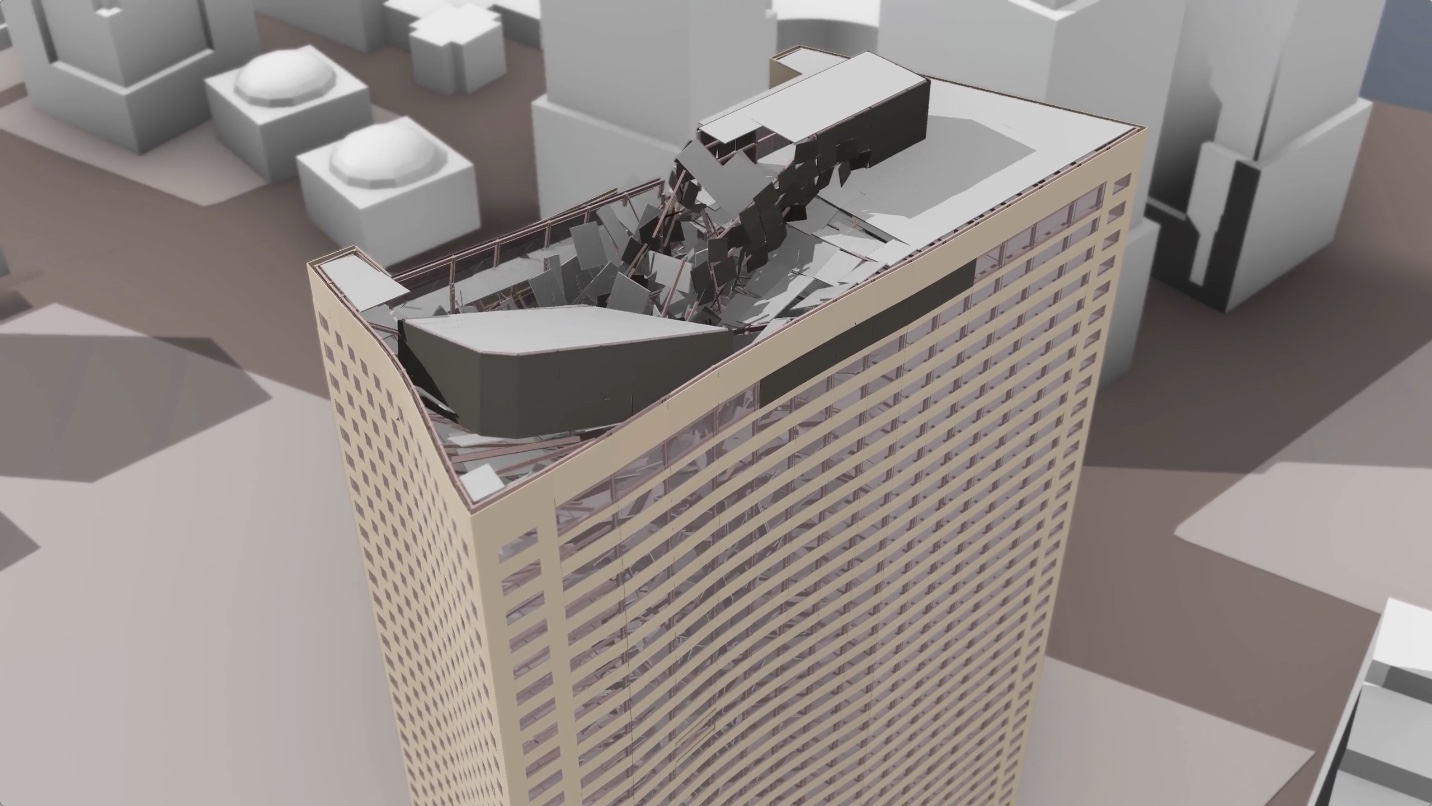 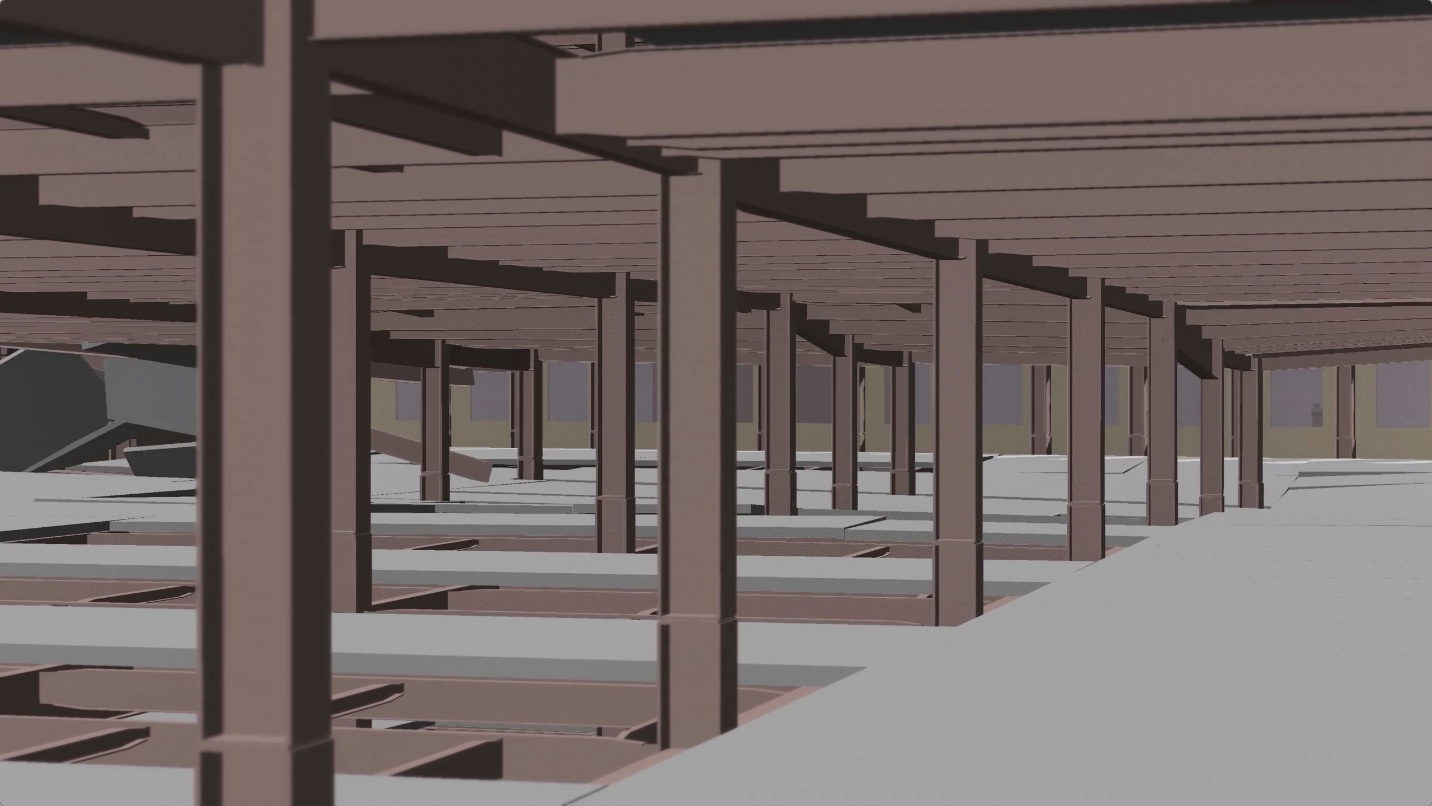 What he seems to ignore are the impact of the transfers in the form of the collapse. He presents the model as if there were NO transfers. Whether the collapse of the region around col 70 was at floor 13 or 12 or whatever floor... the descending floor masses and steel surely dislodged/destroyed the load transfer structures... which would show a different collapse FORM and SEQUENCE. Once the transfers failed... and their failure likely was east to west... the entire inside would collapse INCLUDING undermining the facade... which likely lagged just a bit behind the collapse of the interior.

He showed the 3d scan of the debris pile, but I wonder how an actual photo of the pile vs. his pile would compare. How would the skin sections compare? I found some, but don't have the know-how to super-impose and all of that for comparison.

Also, besides what Jeffrey posted in post #2, how open for "tweaking" is this simulation to sway it toward what we "want" to see? How easy will it be for some to argue that you could make the collapse look like whatever you want it to look like to reflect your own personal opinion?

As long as the tweaking is within a plausible envelope of the unknown variables, it is fine. If such tweaking shows that lots of forms and features are possible, including those actually observed, this would to pad the credibility of the "no demolition devices after initiating local failure" class of theories.

Invalid tweaks would include adding entities that weren't actually there, like extra elements, unrealistic life loads, or indeed demolition devices.

Jeffrey Orling said:
What he seems to ignore are the impact of the transfers in the form of the collapse.
Click to expand...

It's far from a perfect model, and much less exact than NIST's models. But the point here is an illustration of the very broad principles of collapse. Compare it with an attempt I made for WTC1: 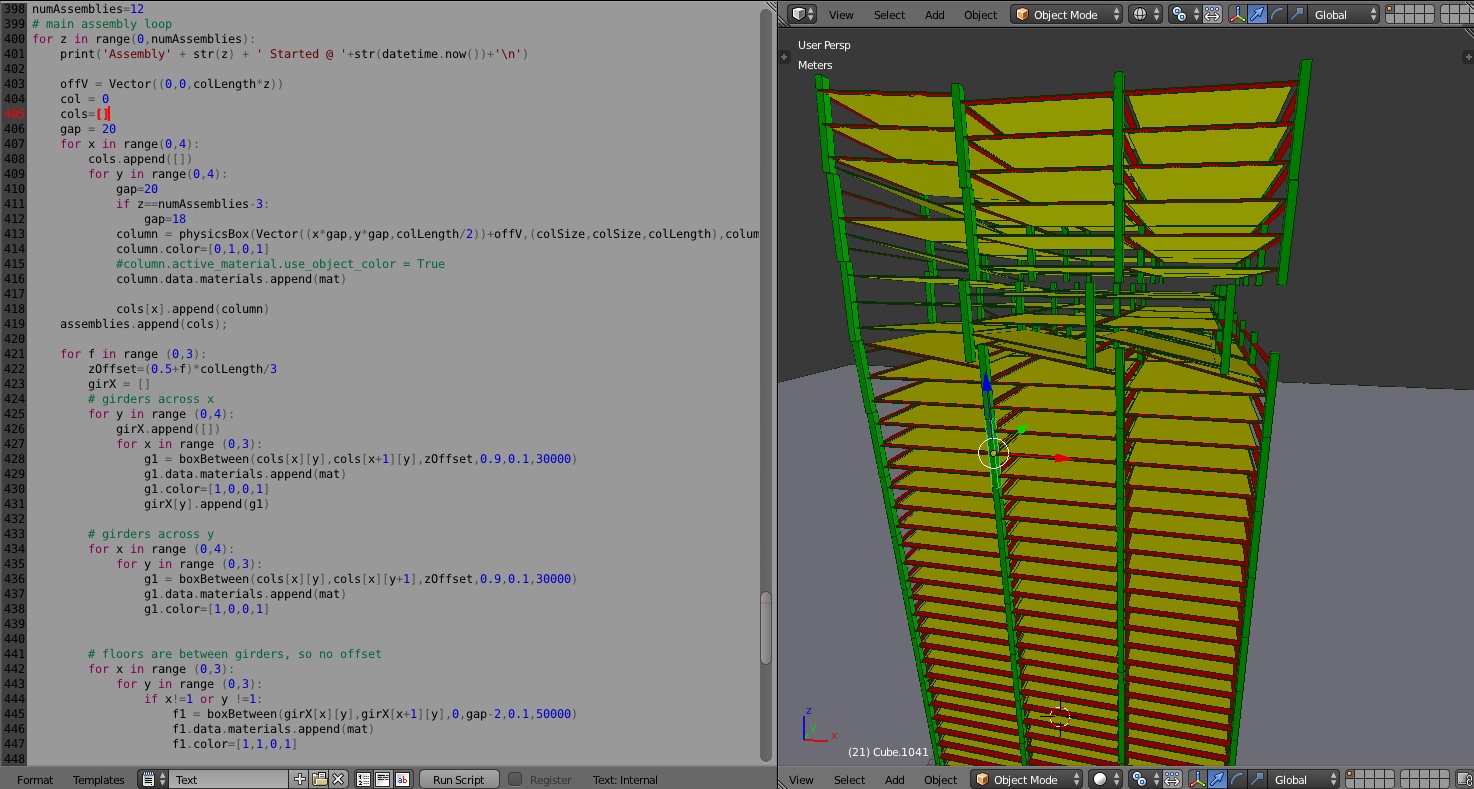 Kostack's model is the best independent model available. Unfortunately as it's not exactly the right collapse people will nit-pick. However the intent is, like with mine, to illustrate general principles and characteristics. Here he failed columns 79-81, and the collapse was as shown, similar to the real world in many aspects.

I think the benefit here is that people will look at the actual structure of WTC7, and perhaps understand more about how the "interior then exterior" collapse might work.

Staff member
Another thing he does is add damage to the model to match the photos. Now this is a little speculative, as we don't have great close-ups of the damage, but there's a reasonable visual match. 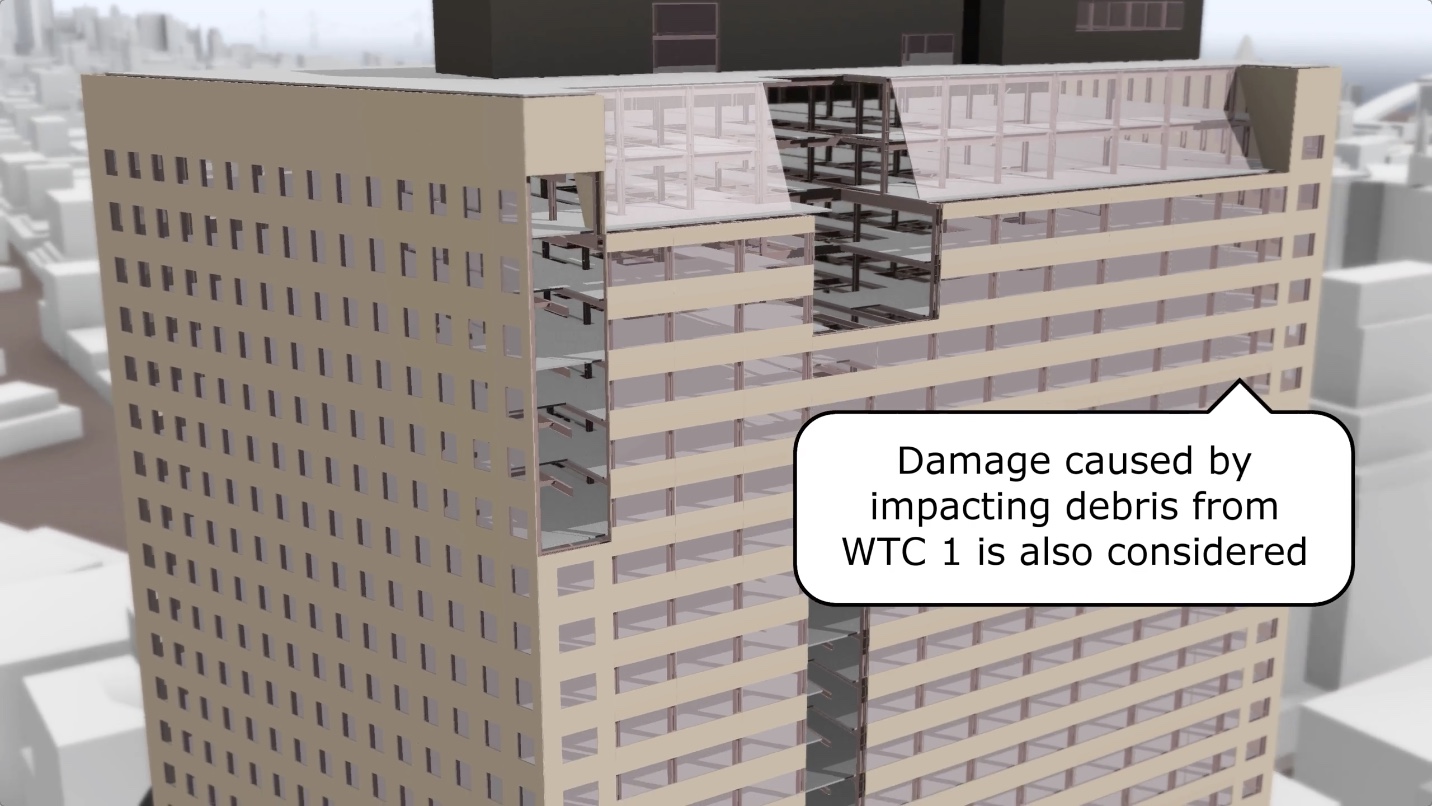 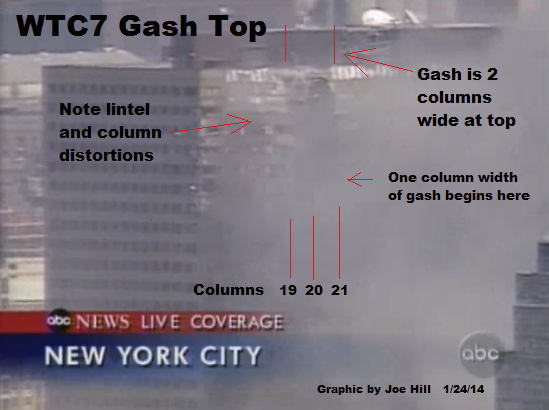 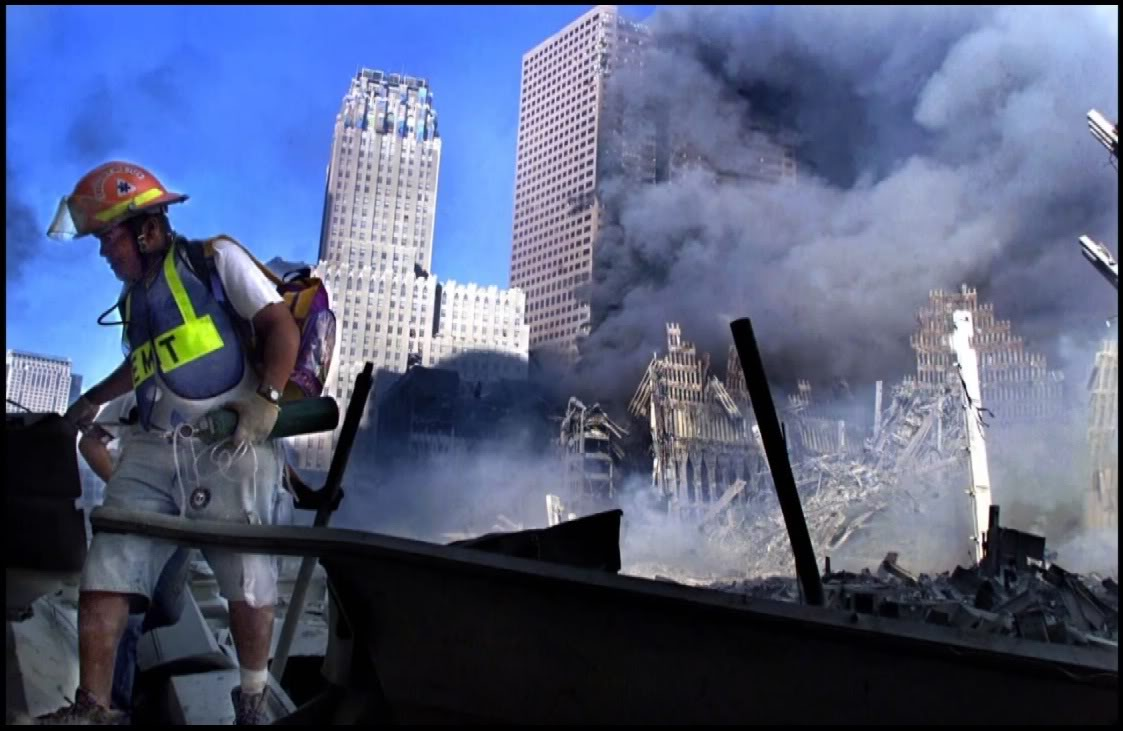 Staff member
His southwest corner damage seems wrong though, as the corner column (15) is intact 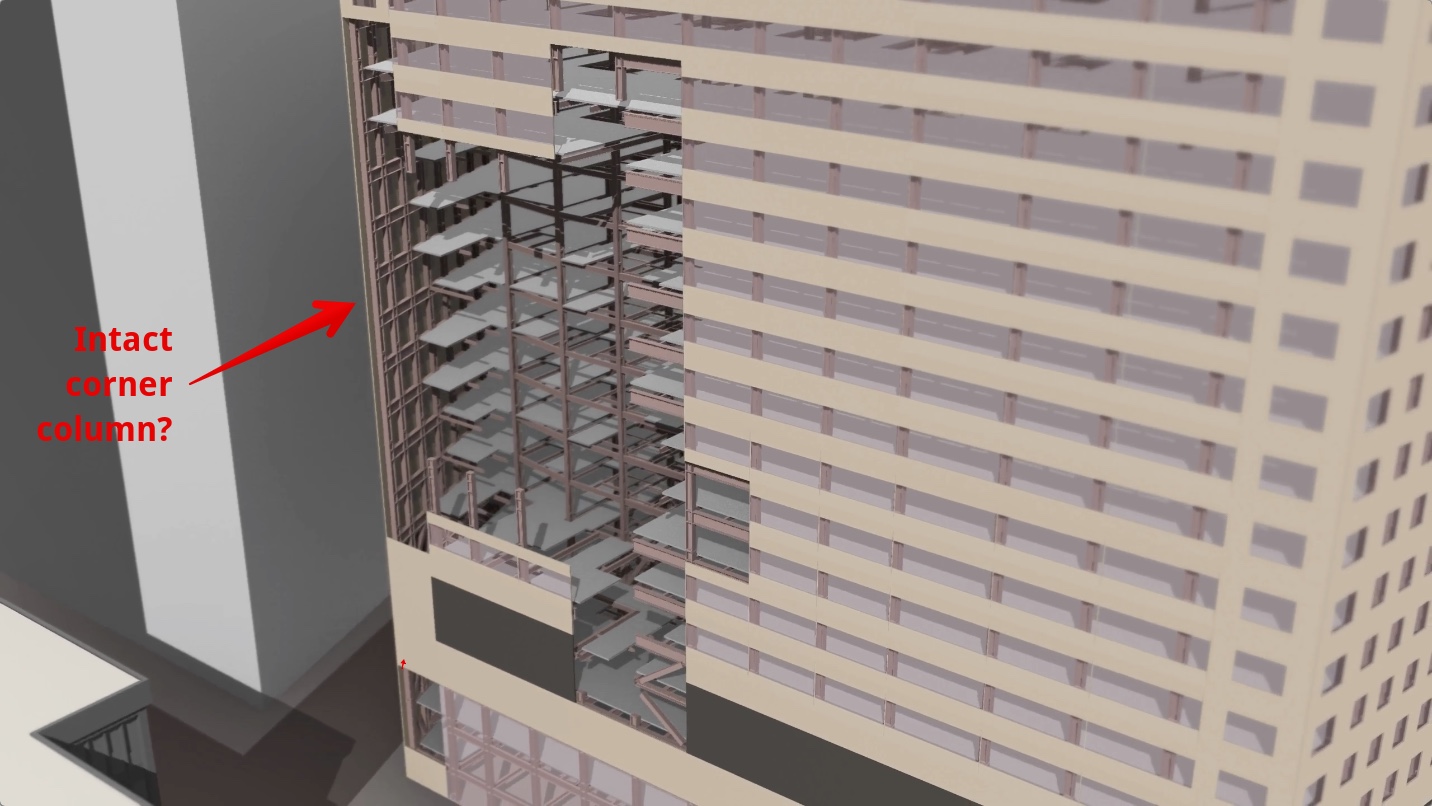 Whereas photos and the NIST analysis suggest otherwise. 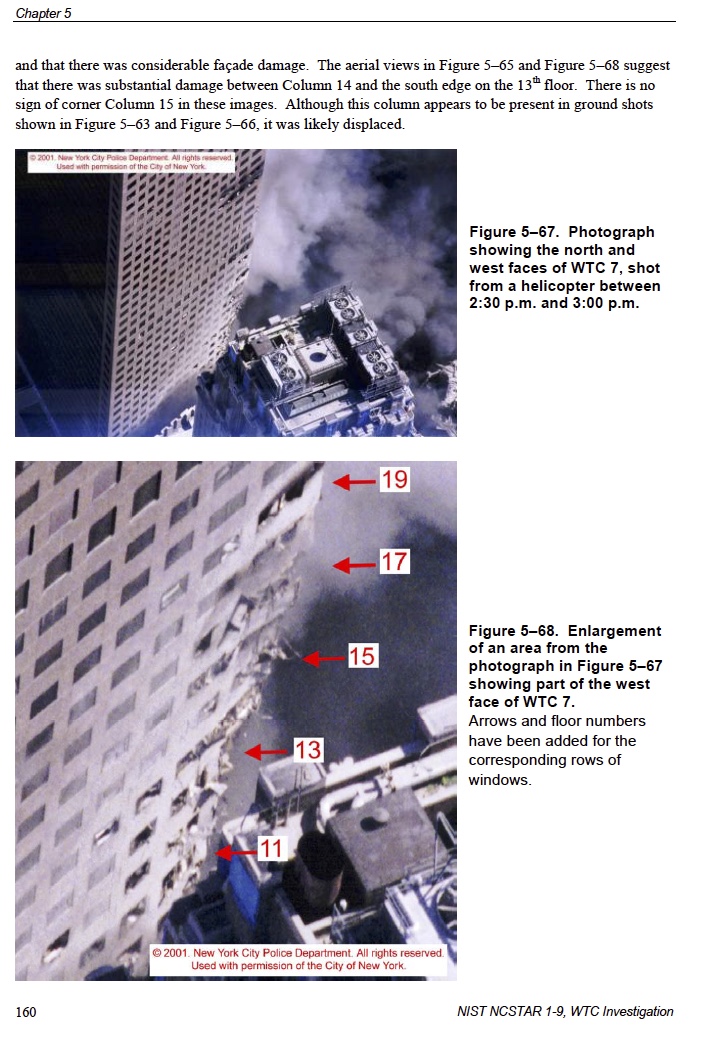 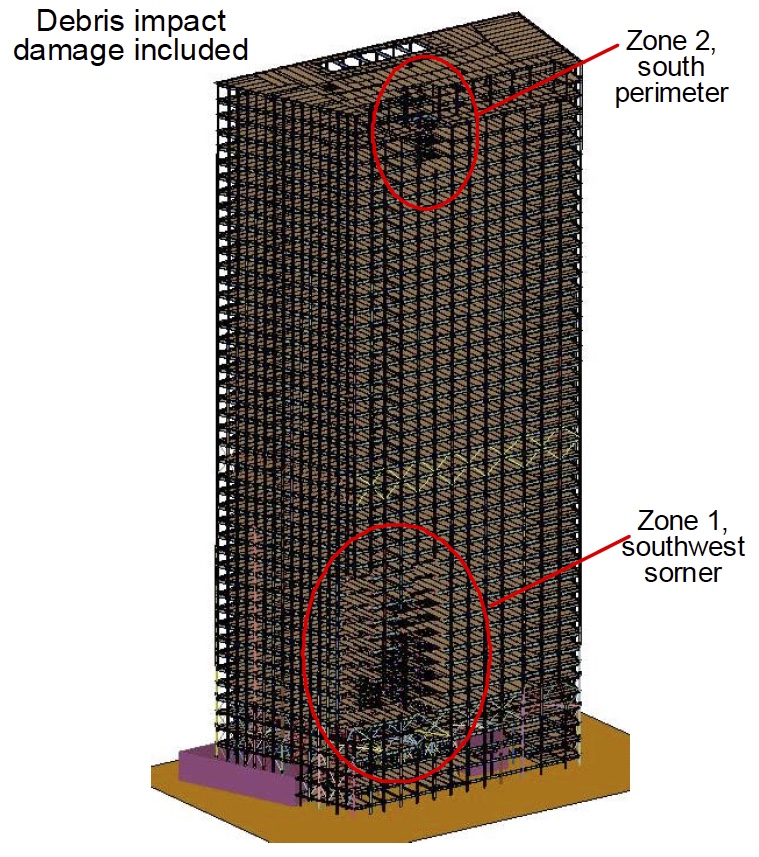 My point is that the collapse sequence likely involved the collapse of the transfers EARLY on... THEN the structure above in the center and west came down.

failure at column line 79 and 80 (this could occur anywhere from floor 5 - 13 or higher even. But for the falling mass to collapse transfer trusses below it would likely have to be multiple floor masses from above as those trusses supported 40 stories and were massive.

collapse of the main East-West girder at floors 3-5 at the north side of the core which led to:

collapse of the MG 23 which were supported on main East-West girder on their west side which led to:

collapse of the center of the tower up to:

The facade fell on and folded over the collapsed materials.

The collapse was driven by FAILURES at the transfer structure level... We don't know what triggered those failures... falling debris from above... or connection (bolt) failures on one of the trusses (bolts being the way the members were connected one to the other.

Jeffrey Orling said:
My point is that the collapse sequence likely involved the collapse of the transfers EARLY on... THEN the structure above in the center and west came down.
Click to expand...

Well, perhaps you should encourage someone to simulate that. But this is getting a bit off topic.

Mick West said:
Well, perhaps you should encourage someone to simulate that. But this is getting a bit off topic.
Click to expand...

I hereby officially am encouraging someone to model this!

rereading this thread since someone just linked to Kostacks simulation and i'm struck again at how much I trust "computer guys" to do computer simulations over engineering students (ie Hulseys wtc7 report and data dump)
You must log in or register to reply here.

Debunked: 9/11 truth experts are knowledgeable professionals and their judgments are to be trusted
2

Related Articles
NIST's Response to AE911Truth's WTC7 Girder Objection
Final Report: Hulsey/AE911Truth's WTC7 Study
WTC7: Does This "Look Like" a Controlled Implosion?
TFTRH #25 - Jason Bermas: Producer of Loose Change, Shade, Invisible Empire
Debunked: AE911T: CNBC Anchor Ron Insana claims Building 7 a Controlled Implosion
Sept 3, 2019 release of Hulsey's WTC7 draft report: Analysis
WTC7: Determining the Accelerations involved - Methods and Accuracy
A wider perspective on the WTC7 collapse
Some New-ish WTC7 Photos (and video?) Corner Damage
Debunked: NIST's Lack of Explanation for WTC7 Freefall [They Have One - Column Buckling]
Debunked: WTC7 was the only building not on the WTC block that had a fire on 9/11
WTC7 South Side Photos
WTC7 Smoke Movement Before and After Penthouse Collapse
How could the interior collapse in WTC7 Move West Without More Visible Exterior Damage
WTC7: Is AE911's (and NIST's) Focus on A2001 Justified if it Was Not "Key" in NIST's Global Model?
WTC7 Penthouse Falling Window Wave
The Role of Diesel Fuel in WTC7
First Interstate Tower Fire - Comparison with WTC Towers and WTC7
Have You Actually READ the NIST Report on Building 7?
How Hot Could The WTC7 Fires Burned, and How Hot could the Steel be?
Did NIST examine Steel from WTC7?
Movement of Column 79 as Expressed in WTC7 UAF Presentation
Debunked: UAF Study Shows WTC7 Could Not Have Collapsed from Fire
Debunked: CIA Agent Confesses On Deathbed: ‘We Blew Up WTC7 On 9/11’ [HOAX]
Tehran Plasco Highrise Fire And Collapse - 9/11 WTC7, WTC1&2 Comparisons
What is this woman hearing as WTC7 collapses behind her
How Buckling Led to "Free Fall" acceleration for part of WTC7's Collapse.
Other WTC7 Investigations: Aegis Insurance v. 7 World Trade Company Expert Reports
Debunked: "WTC7 Sound Evidence of Explosions" by Chandler/AE911T
AE911 Truth's WTC7 Evaluation Computer Modelling Project
Sulfur at WTC7: how could it come from gypsum as the BBC claimed?
Why little to no analysis of steel from WTC7?
AE911 Letter to Inspector General Claims NIST WTC7 Report is Provably False
WTC7 Firefighting
WTC7 - Can YOU Spot The Difference?
The plausibility of demolishing WTC7 with explosives on 9/11
How much of the Smoke Around WTC7 actually from WTC7?
What would a new WTC7 Collapse Investigation look like?
WTC7 and other Buildings, the Significance of Sheer Studs
WTC7 Fire Temperatures and effects on the East Floor System
Significance of WTC7
FDNY Chief Daniel Nigro's statement on WTC7
Critical Errors and Omissions in WTC7 Report Uncovered
How could WTC7 Possible have fallen like it did?
The Uniqueness of the WTC7 Collapse
WTC4 fire photo labeled as WTC7 on 911 memorial timeline site.
Debunked: WTC7 vs. Chechnya's Tallest Building Fire (Grozny-City Complex)
Does NIST not testing for explosives and not testing WTC7 steel invalidate everything
Debunked: AE911Truth's WTC7 Explosive Demolition Hypothesis
Debunked: 9/11 Melted cars near WTC7
Share:
Facebook Twitter Reddit Pinterest Tumblr WhatsApp Email Share Link