Justice Scalia death: No autopsy as evidence of conspiracy

So the Justice Antonin Scalia conspiracy theories are starting to fly big time, as expected. Of course I'm not quick to believe any conspiracy theory, of course, that's why I have been on metabunk for the past few years, but this has got me sort of puzzled. Why would they not do an autopsy on Scalia to confirm the cause of death? I know he had health problems and was 79, but for someone that important you would think that it would be critical to find out how/why he died. This is the main claim of evidence of a conspiracy to kill him, that I have seen on the internet so far. Of course Alex Jones and the usual are hyping this, but also some main stream sources are asking why no autopsy. Sources like CNN and Fox News.

There could be some conspiracy at play here. I mean, how likely is it that a morbidly obese, mercurial, chain-smoking 79 year-old would just suddenly die from a heart attack?

Michael Savage was saying the death looked "fishy" during the 2 minutes I listened to his show yesterday driving.

I guess what I'm trying to get at is..isn't an autopsy standard procedure, or is it something only done if someones death is unlikely? ie; someone much younger, or someone dying in a strange location, like in a dumpster or something. I know the U.S. Marshall's showed up at the scene, to make sure it wasn't a homicide..which they obviously confirmed it wasn't. But I would still think that someone this important would need an investigation into cause of death. To say if it was a heart attack, or stroke ect.. unless maybe the family requested it not be done. I'm just not familiar with how this stuff works.

Whenever it appears a person died from something other than natural causes, like a murder, an autopsy can be ordered. The foul play doesn't have to be obvious either. A police investigator can have one done against a family's wishes if foul play is suspected.

If it's suspected that a person died as a result of a disease, an autopsy can be ordered for public health purposes. The reason is because stopping the spread of diseases is important to the government.

Some states, such as California, allow doctors to request an autopsy when an infant dies.

Under federal law, CEOs of prisons may order an autopsy of an inmate if they died from murder, suicide, illness, accident or any unexplained death. But the autopsy must be done according to the laws of the state where the prison is located.

And of course, families can always request an autopsy for their late loved one, as well.

His family is convinced he died of natural causes. According to his son:

"He was a month shy of 80 years old. He lived this incredibly full and active life, but I knew, and he knew, that he was at a place in life where he could be taken from this world at any time," Eugene Scalia continued.

"Our family just has no doubt he died of natural causes. And we accept that. We’re praying for him. We ask others to accept that and pray for him," he added.

Staff member
I think the "why no autopsy" people feel that an autopsy is justified because they personally think the death was suspicious, partly because there was no autopsy. It's similar to the people who think we have a new investigation into the collapse of WTC7 "just to settle the matter" - not realizing that most people consider it settled already.

Alternatively you might argue that a sudden death of a consequential figure should automatically justify an autopsy, just in case they were murdered. While there's no evidence that important people are being murdered, it's not an entirely unreasonable argument that if there was even the slightest chance of murder for vast political gain, then it should be looked into.

But if the family did not think there's any need for an autopsy, then really that's the end of the matter.

It honestly wouldnt matter if an autopsy was done or not. The ones who feel his death is suspicious arent going to believe any "autopsy results" anyway.

Cinderela? Now i'm gonna have that song in my head all night.

That the judge handling Scalia’s case didn’t think one was necessary led to some confusion in the days after Scalia’s death was reported: How could an autopsy not be needed when a Supreme Court justice suddenly dies? But Whalen said there’s nothing in Texas law that would require an autopsy to be conducted. The judge, Cinderela Guevara, said in deciding against an autopsy, she took cues from law enforcement, including the marshals, about how Scalia was found, and consulted with Scalia’s physician about his health. (Scalia reportedly had high blood pressure and heart issues, and wasn’t strong enough to have surgery after he recently injured his shoulder.)

In astatement to NBC News, Guevara said she was “respect[ing] the wishes of the Scalia family” in not ordering an autopsy. “I did this based upon credible reports to me from law enforcement and from Justice Scalia's personal physician.” In Texas, the only time autopsies are required is if the death of a child is linked with suspicions of abuse, or if a district attorney insists that one be performed http://www.theatlantic.com/politics/archive/2016/02/antonin-scalia-autopsy/463251/

I"m going to guess that conspiracy theorists think EVERYONE gets an autopsy. 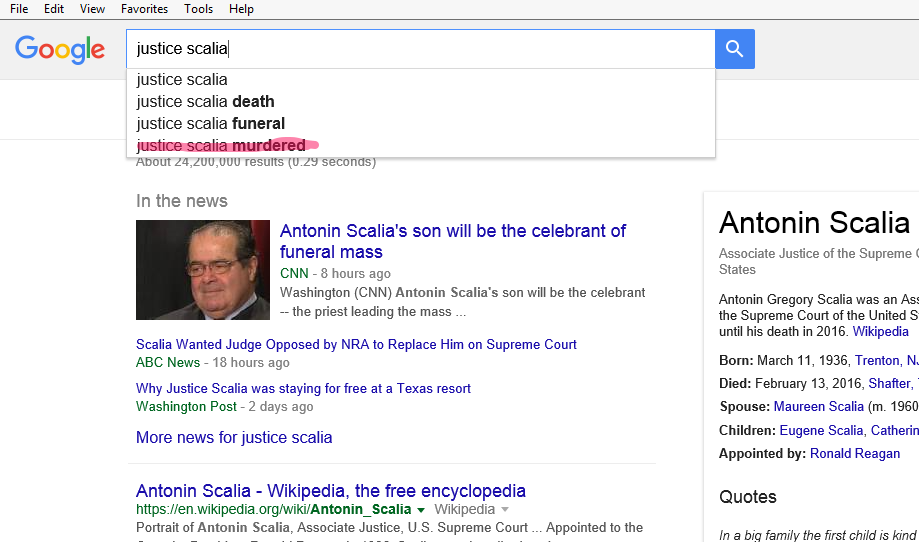 It's even more apparent when a search for "Justice Scalia Murdered" brings up 3,900,000 results. 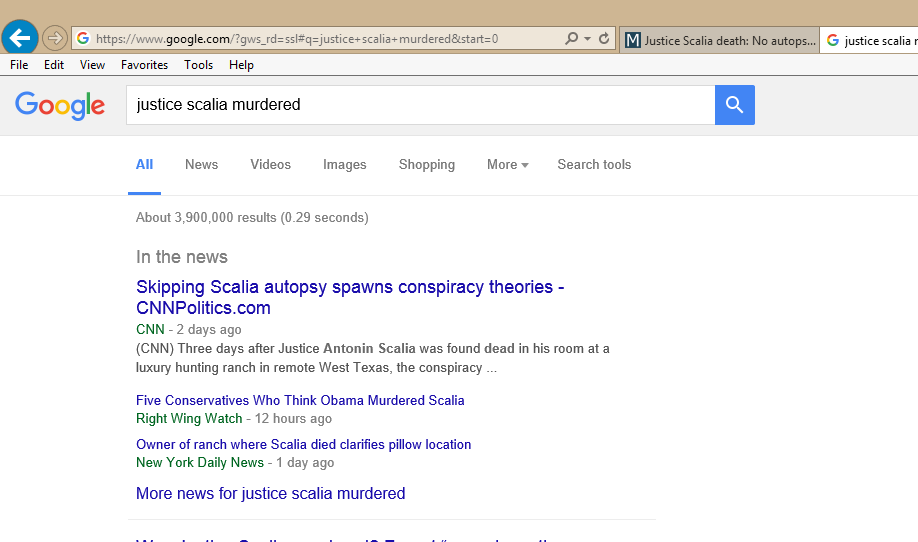 As far as the autopsy goes, I think PeteSYD and Mick summed it up quite well.


PeteSYD said:
I mean, how likely is it that a morbidly obese, mercurial, chain-smoking 79 year-old would just suddenly die from a heart attack?
Click to expand...

Mick West said:
But if the family did not think there's any need for an autopsy, then really that's the end of the matter.
Click to expand...

We just might want to prepare ourselves for the people who disagree.


Sorry if I'm OT with this.

NotQualified said:
You know it's in the conspiracy wheelhouse when "Justice Scalia Murdered" is the fourth top result on google when typing in just "Justice Scalia".

It's even more apparent when a search for "Justice Scalia Murdered" brings up 3,900,000 results.

We just might want to prepare ourselves for the people who disagree.

I agree it's going to be a long lived conspiracy.
But i think those results only pop up NOW because it's a new hot button topic. and if you add quotes to the phrase you get less hits

deirdre said:
I agree it's going to be a long lived conspiracy.
But i think those results only pop up NOW because it's a new hot button topic. and if you add quotes to the phrase you get less hits

Ah thank you, seems I made a noob error. Glad to see the numbers are so much (relatively) lower.

NotQualified said:
Glad to see the numbers are so much (relatively) lower.
Click to expand...

well you get another 27,000 is you add a "was". so figure other variations.. theres still alot.

Quoting the 'number of results' from Google for any given term is meaningless, by the way. There isn't ever more than 1000 results. Use Google Trends or their ngram viewer, sure, but not that number from the Search Results page.

Also, in this specific case, I'm surprised that people are surprised a judge could be associated with the term 'murder'

Late Supreme Court Justice Antonin Scalia died during a meeting of an Austrian secret society founded by the Bohemian Grove as a feeder group for the real Illuminati – and the resort hosting the society is filled with esoteric artwork.

During a visit to Cibolo Creek Ranch in Presidio Co., Texas, Scalia died among members of the U.S. chapter of the International Order of St. Hubertus, which was launched in 1966 by associates of the Bohemian Grove which itself was a spin-off of the Order of the Bavarian Illuminati founded in 1776 to counter both the American revolution and the emerging populist movements in Europe.


I had no idea that “sinister ambiance” was a tip off for a global conspiracy. A helpful tip.
You must log in or register to reply here.

Claims of Drug Overdose in the Death of George Floyd