Another tale of intrigue and adventure on the high seas from the self professed published author, radio talk show host, circuit speaker, humanitarian, animal rights activist and investigative journalist who works "with Doctors around the world for cures"... Roxy Lopez.

Judging from this article's title, "Alaskan Category 3 Ice Storm Geoengineered – Here is Your Proof!", we are to believe that four, seemingly unrelated events, prove that a large storm system which hit Alaska on Nov. 9, 2011 was in fact geo-engineered. The four elements of this amazing puzzle could have been pulled from an international espionage thriller. First, there is the earthquake in Kamchatka that occurs at the exact moment a multinational tsunami readiness exercise is taking place mere moments before a 100 year storm slams into the Alaska coastline. Fortunately, the NOAA, having inside knowledge of the oncoming storm, evacuates the Alaskan gulf two and a half weeks prior to the storms arrival.

How do these four elements prove the Category 3 ice storm was geo-engineered? Unfortunately, the article never makes that connection.

So instead, let's have a look at the individual pieces of this puzzle...

The Intergovernmental Oceanographic Commission was established in 1961 as a vehicle for the sharing of information relating to oceanographic data. They developed a tsunami warning system for the Pacific ocean to help improve response capabilities.

Over the years, they performed several exercises to test the effectiveness of the system. The latest one, named Pacific Wave 11, occurred over a period of several days starting Nov 9, 2011. The exercise consisted of member states choosing one event from a list of ten proposed fictional tsunami scenarios. Each country would then conduct simulated emergency procedures in real time.
Exercise Pacific Wave 11 will be held on 9 and 10 November 2011, and will involve multiple
scenarios, played out in real time, to allow all Pacific countries to select and exercise a
regional/local source tsunami event.

Of the ten fictional tsunamis in the exercise, one of them was to be the result of a magnitude 9 earthquake near the east coast of Kamchatka that strikes on Nov. 9, 2011 at 2200 hours at a depth of 20km. This imaginary earthquake would cause 12m deep ocean waves and have been a major threat to the coasts of Kamchatka and Japan.

As it happens, on Nov 9, 2011 at about 22:01 UTC, there was an actual, real life, documented, earthquake off the coast of Kamchatka. It was also the only one to roughly co-inside with one of the scenarios in the Pacific Wave 11 exercise. The real earthquake had no similarities to the fictional Kamchatka quake in the IOC exercise other than approximate location and time. The real earthquake was magnitude 5.2. It didn't kill anyone. It didn't cause any property damage. In fact, people 100km away barely felt it. Most importantly, the real Kamchatka earthquake on Nov 9, 2011 was not a megathrust quake and did not cause a tsunami, which was the purpose of the IOC exercise in the first place.

Was the real earthquake just a coincidence? Let's look at some facts...

​
In fact, the east coast of Kamchatka is flanked by a very active subduction zone. 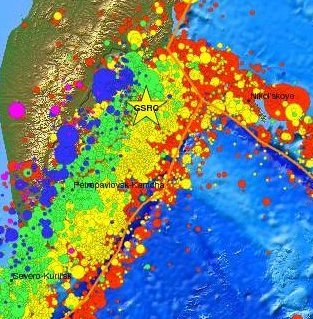 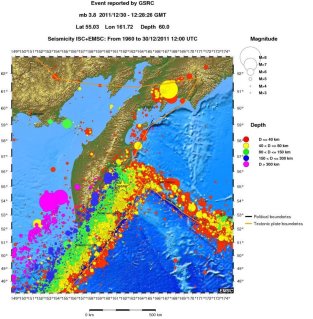 This area has experienced hundreds if not thousands of earthquakes over the last 50 years and the last magnitude 9 to cause a tsunami was 60 years ago.

So, to accept that an earthquake occurring in an extremely geologically active area, at a time and place that happens to roughly coincide with one scenario from a tsunami exercise, is anything more than a coincidence would require more evidence than just an unsubstantiated claim. Which is all the article offers.

Now that some light has been shed on the earthquake issue, I'll examine the final pieces of evidence summed up in the closing statements of the article...

So is it possible that NOAA knew about the catastrophic storm to come, ordered fishing boats to go home, didn’t give a reasonable excuse as to why they were evacuating the Alaskan Gulf because it would give way to the fact that they are on the inside when it comes to geoengineering storms?

1. Did the NOAA know about the colossal storm heading towards Alaska 17 days prior to the Nov. 9 earthquake and tsunami exercise?

Doubtful. One of the NOAA's responsibilities is to tracks storms and issues warnings. The earliest weather warning issued by the NOAA regarding the storm was Nov 7. There is no evidence anyone knew that a storm was forming as early as Oct 23rd.

2. Did the NOAA order an evacuation of the Alaskan Gulf for no reason on Oct 23?

No. First of all, the NOAA is a scientific agency. National Marine Fisheries Service (a division of the NOAA) does have a law enforcement branch, but as far as I know, their mandate is to enforce fishing regulations only. They might have the ability to impound a vessel but not to evacuate the entire gulf.

When the article states...

This year, the fishing vessel that Steve Heckel was on known as the PAVLOF was told to go home 4 weeks early, along with roughly 80 other fishing vessels. They were given the order by The National Marine Fisheries (NOAA) to end their trip at midnight on October 23, 2011

So what can be said about all this...

Only that, in my opinion, "The Truth Denied" is a very apt name for the that website. Cheers.

Roxy Perry, and the truth, usually never seem to intersect. And she does not exact care about the truth either. She is not exactly one to retract silly allegations or re-edit her videos when she is corrected. Actually she makes the video first, without doing any research at all, and then and when the reality is pointed out to here, she will just keep going on with total bunk on her websites and videos.

She was a realtor until 2010, maybe she is trying to be a conspiracy entrepreneur for a new job. People like Tony Hilder and Len Horowitz have made a career from fleecing people

firepilot said:
She is not exactly one to retract silly allegations or re-edit her videos when she is corrected... just keep going on with total bunk
Click to expand...

Par for the course. Has any one of them ever retracted anything they've said?

It's not easy being a truther. Uncovering the truth is very lobor intensive work. Who has time for facts? They can't live in the past. They must move forward, not backward, upward not forward and always twirling, twirling, twirling towards freedom.

And she is having Don Croft on her show friday. He is another conspiracy entrepreneur, that markets devices for "Orgone".

Roxy will sometimes admit that she was not right, but then she will continue on like nothing happened. She still insists Evergreen has some fleet of KC-135 aircraft, even after I corrected her about it. And then she had a video freakout about the dirt strip used by the Tucson Glider Club...

Staff member
Roxy does seem to be slightly open to reason. She did put a piece on her web site (by "Sucahyo") about how cloud seeding might not actually be the big proof of chemtrails everyone says it is.


firepilot said:
She was a realtor until 2010, maybe she is trying to be a conspiracy entrepreneur for a new job. People like Tony Hilder and Len Horowitz have made a career from fleecing people
Click to expand...

Many conspiracy entrepreneurs are quite genuine in their beliefs, if not logically consistent, or soundly based.

Pogopoint99 said:
The NMFS did not evacuate the Alaskan Gulf on Oct 23, they ordered a stop to cod fishing.
"SUMMARY: NMFS is prohibiting directed fishing for Pacific cod by pot
catcher/processors in the Bering Sea and Aleutian Islands management
area (BSAI). This action is necessary to prevent exceeding the 2011
Pacific cod total allowable catch (TAC) specified for pot catcher/
processors in the BSAI.

If, as she says, her husband works in the fishery then she knows that this was a TAC closure in a specific fishery and that NMFS did not (and cannot) evacuate the entire Gulf.

firepilot said:
Roxy will sometimes admit that she was not right, but then she will continue on like nothing happened.
Click to expand...

Good for her. And I mean that without any sarcasm. The most I've ever got from a conspiracy theorist is a "ya but..." followed by a shifting of the goal posts.

scombrid said:
If, as she says, her husband works in the fishery then she knows that this was a TAC closure in a specific fishery
Click to expand...

I found it very odd that her husband didn't know why they were going back to port. If my pay is in jeopardy, I get the details rather quickly.

It could have been a breakdown in communication. Was the skipper never told why they were ordered back to port? Was it never communicated to the crew? Whatever the case, it's very poor research on Roxy's part.

I'm in fisheries. Granted I'm on the east coast. I don't work for NMFS but I am on a scientific advisory committee for a specific fishery managed by NMFS (NMFS does fish and fish harvest and that's about it). Most of the harvesters are pretty damned engaged in the management process. They know when they are approaching either their allotted quota (if they're on an individual transferable quota system) or if the fishery in general is approaching the Total Allowable Catch (TAC) if such a cap is in place. I would find it odd that a boat would go back to port and not know this, and everyone on the boat not know this.

Even deck hands usually know what's up when a closure hits. Skipper hasn't got a full hold he's apt to announce to the crew that the f'ing feds shuts us down....

Aside from that, other fisheries under NMFS jurisdiction in the region were not closed. It simply wasn't a reasonable claim that because the cod guys gut called in early that the whole Alaska Gulf had been evacuated by NMFS.

scombrid said:
Even deck hands usually know what's up when a closure hits. Skipper hasn't got a full hold he's apt to announce to the crew that the f'ing feds shuts us down....
Click to expand...

Agreed. So help me understand this. According to Roxy:

Fishermen purchase “quotas” before the season begins, and each boat or company is subjected to the amount of their purchase, per government rules. The law is in place to prevent overfishing.
Click to expand...

It's possible that the sum of the "catch shares" or "IFQs" exceeds the total allowable catch for that sector of the fishery and that TAC can be hit before all fishers in the fishery hit their target.

I don't know the specific regulations for that fishery. Regardless, it was clearly a regulatory closure based on harvest limits.

scombrid said:
It's possible that the sum of the "catch shares" or "IFQs" exceeds the total allowable catch for that sector of the fishery and that TAC can be hit before all fishers in the fishery hit their target.
Click to expand...

You would think the sum total of all IFQs would equal the TAC. After all, isn't the purpose of allocating catch shares to insure the TAC is not exceeded?

Got it... that makes sense. Thanks.
You must log in or register to reply here.