Mendel said:
the topic is "How Transfer Structure Failure Led to "Free Fall" acceleration for part of WTC7's Collapse."

You don't have to stop discussing fire, but it'd be good if you started a new topic, and did a forum search ("unfought fire" has come up several times since 2013).
Click to expand...

The transfer structures... transfer trusses and cantilever girders do exactly what their "name" says: they transfer loads laterally. A cantilever girder for example (MD27) has a concentrated load at the end of cantilever (perimeter/moment frame) and the load is "transferred" to a column(s) several feet from the end of the cantilever. The site conditions were such that the columns of the moment frame could not go "straight down" to the foundation.
The transfer trusses performed similar load transfer between columns above and those that supported the truss below which were not in axial alignment.

What likely happened with TT1 and TT2 is that they were "disturbed" by having 40 stories of floors and contents rain down on them. Both were framed to the core and the girders supporting floors around the core were likewise "displaced". likely leading to the failure of the beam to girder joints and the collapse of flooring outside the core at the level of the trusses.

So local column failure led to disturbance/dislocation of trusses and girders, which led to floor collapse all around the core and loss of bracing of the perimeter core columns.... in a rapidly unfolding runaway collapse of the frame and floors it supported.

Basically the failure of the transfer structures "transferred" failures throughout the foot print.

Mendel said:
Within the context of WTC7, there is no need to define the finer points of "unfought": "several big fires started simultaneously with no mains water available near the building, and the NYPD in disarray from heavy losses" has got to be far removed from any borderline case of "unfought fire" you happen to choose—and that's not even considering that you don't have any criteria to recognize a good answer to your question.
Click to expand...

Exactly. PLUS the debate is "of- topic" AND the criteria for assessing the scale of "trauma" including fires has been legitimately identified and ignored in more relevant threads.

Mendel said:
And it doesn't pertain to the effects of transfer truss failure at all.
Click to expand...

And even that topic has been artificially extracted out of its context where it is one of three sub-mechanisms suggested as contributing to the FFA of the WTC7 perimeter shell.

Explanations of how the TT failures could have contributed to that specific event of FFA is legitimate. A narrow focus on explaining the possible mechanism.

Jeffrey Orling said:
Basically the failure of the transfer structures "transferred" failures throughout the foot print.
Click to expand...

For one... any columns they supported would lose support if the transfers "failed"
2 - the transfers were laterals structures - not unlike a beam of girder and their failure or displacement would "impact" on structures they were framed into.... girders and beams
3. FFA resulted when the structure supported to moment frame below floor 8 collapse/buckled failed
this included a "belt truss" at floors 5-7 which is a transfer structure in itself
4. I suggest that the mass of 47 floors collapsing inside the cage of the perimeter undermined the axial structures at the base of the tower... to a height of as much as 5-8 stories
5. "Columns" were 2 - 3 story elements with the belt truss being 3 stories 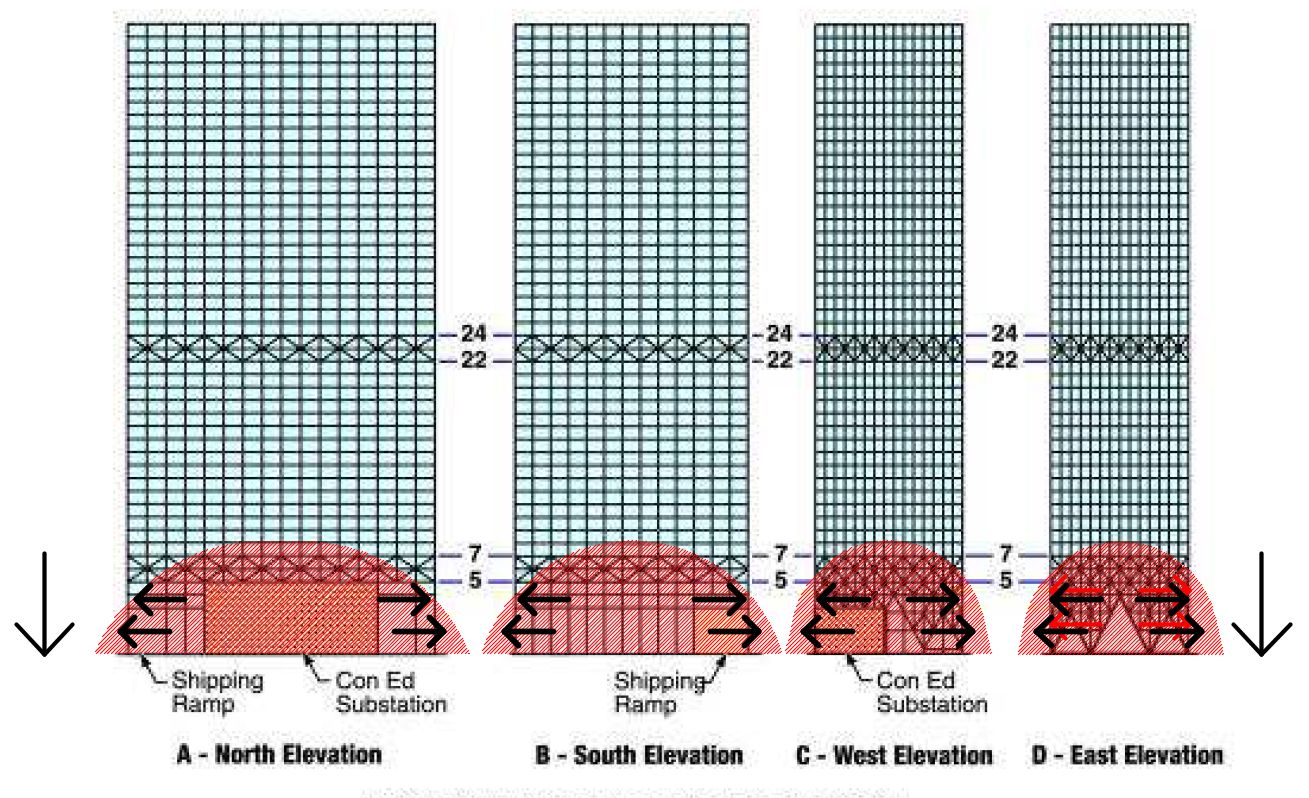 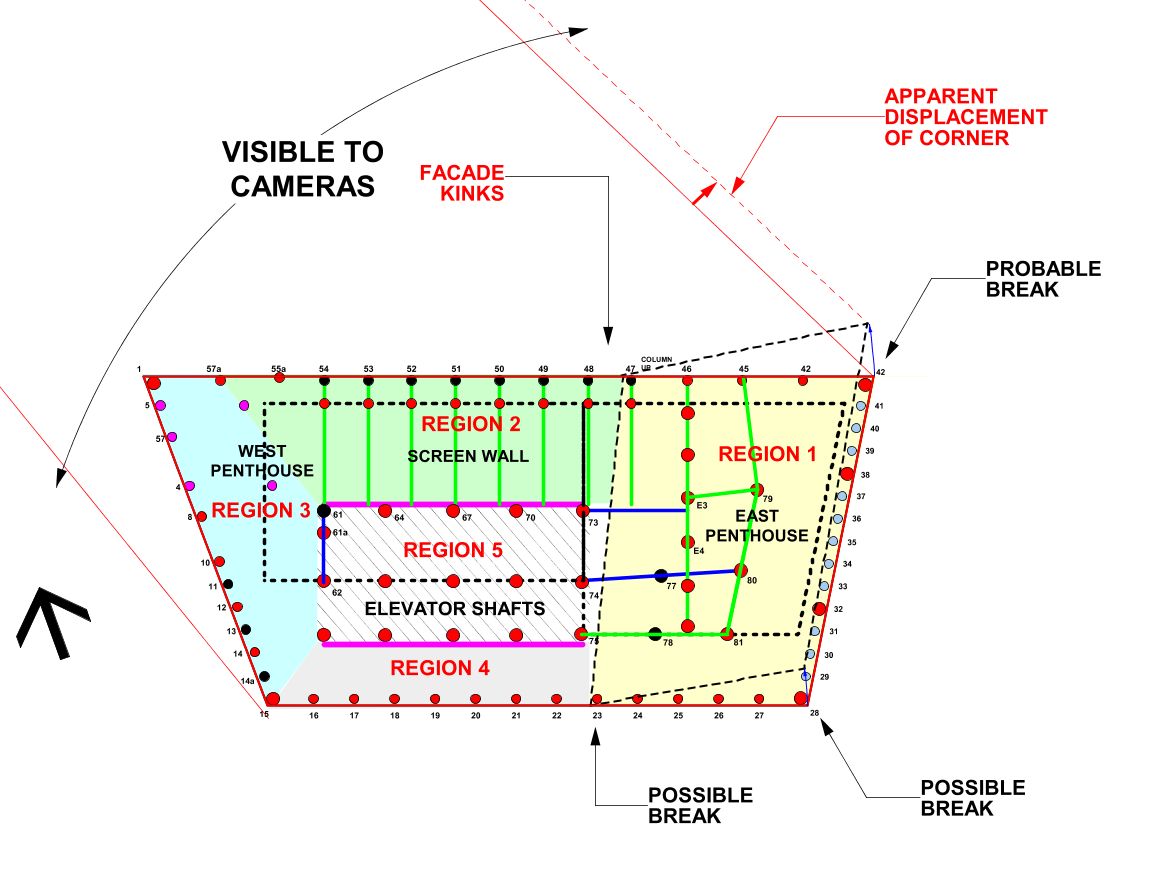 Going back to how failures "propagate" through a structure.
if a column fails, for any reason, it can no longer convey the load it carries to the foundation. These loads include the applied lateral loads - beams, girders and floor loads... and the axial load of the column above (if you think of a multi story column as a series of columns stacked up)
As Econ41's diagram shows those loads are moved, transferred or redistributed to intact columns... And this is done via the lateral structural member. Failures propagate through a structural frame... first to the closest columns and then to those further away.
A structure may "survive" if the redistributed loads do not exceed the capacity of the intact columns receiving the additional loading. Survival would therefore depend on the reserve capacity of the individual columns. It's obvious to see that this can develop into a runaway progression of failures and even a total collapse... as fewer and fewer columns are supporting more and more loads.
A local floor collapse does "unload" the columns which support it. But it also renders the column weaker losing critical lateral bracing the floor system (beams and girders) provide. The twin tower collapse of their floors led to loss of bracing of columns and finally failure of the columns. The perimeter moment frame of 7WTC collapse when the columns / structure supporting it collapsed. This was not the same cause as the collapse of the twin tower columns. A
take away is that a high rise is a composite structure relying on all the elements intact to perform (stand).
You must log in or register to reply here.

Thursday at 6:41 AM
Abdullah
A

How Buckling Led to "Free Fall" acceleration for part of WTC7's Collapse.
9 10 11

False Authority: "Thoughts From a Former NIST Employee" on 9/11
2 3