How much do contrails reduce the energy from solar cells?

It contains very interesting data. This figure shows the solar irradiance measured on a clear-sky day (purple curve) compared with a day with lots of persistent contrails (blue curve): 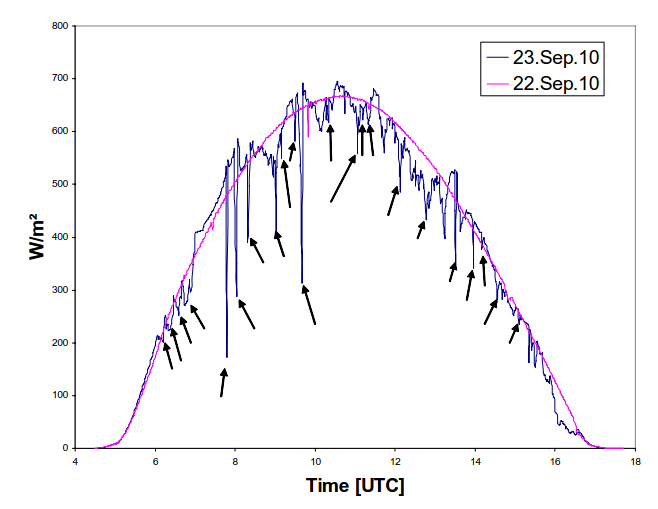 It is interesting that during most of the first half of the day, the solar irradiance on the "contraily" day is overall higher than on the clear-sky day. This is because the white contrails in the sky reflect sunlight and make the sky brighter. But when a contrail passes directly under the sun it creates a shade, and irradiance reduces by as much as 72% for those few minutes when the contrail passes. On this day, the authors counted 49 contrails, and 22 passed between the sun and the observer. By the afternoon, however, a cirrus haze formed from the contrails, and the overall irradiance was lower on average than on the clear-sky day. Still, it was observed that when a contrail approaches the Sun's position, it slightly increases the irradiance because of its reflectivity, so there is an increase in irradiance before and after a contrail passes the sun.

The authors used 3 different types of solar cells to produce energy, and measured the energy production on clear-sky days and contraily days. This table shows the energy losses on days with persistent contrails: 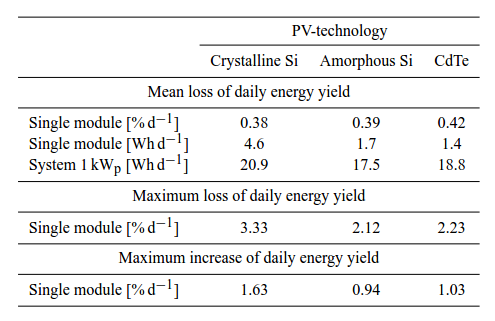 So contrails reduced the total energy production by about 0.4% on average; on the worst days, the loss was 2-3%. But in some cases, the contrails actually caused an increase in irradiance; the highest increase was about 1%.

They also present a graph showing on how many days there were persistent contrails in each month: 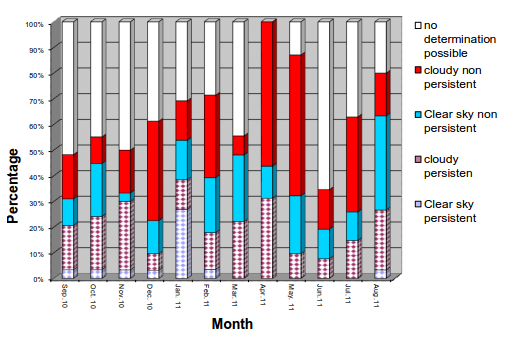 The authors conclude that if 7 to 8 contrails pass between the Sun and a solar cell per hour then a considerable decrease in the energy gain can be expected, and the situation will worsen as air traffic increases.

Still, with only a 3% reduction even on the worst day, it's really not that bad, and if the average is only 0.4% then it is practically unnoticeable.
Last edited: Dec 26, 2015

I assume this study if performed in the Southwest of the US might yield significantly different results. However, these results are fascinating.

George B said:
I assume this study if performed in the Southwest of the US might yield significantly different results. However, these results are fascinating.
Click to expand...

How do you think the results would differ in the SW US?

skephu said:
How do you think the results would differ in the SW US?
Click to expand...

Well, I would suspect there would be fewer naturally cloudy days than in Europe. More ambient sunlight overall on most days. The number and frequency of persistent and non persistent contrails may well be different as well.

I'm not able to view the paper due to low bandwidth, but besides George's suspicions a possible confounding
with comparing a persistent contrail day with a clear-sky day might be that persistent contrail days often tend to coincide with natural cirrus. Maybe they accounted for that
You must log in or register to reply here.

Related Articles
How much research does a truther have to do to get any respect around here?
Why Don't Cloud Formations Change Much in DSCOVR animations?
Does Zooming in Change How Much of Something is Hidden by the Horizon [No]
Claim: Flu vaccine from multi-dose vials Use Too Much Mercury
How much blood should there be here?
How Much Water is there in Jet Engine Exhaust? [About 1.3 Gallons per Gallon of Fuel Used]
How much of the Smoke Around WTC7 actually from WTC7?
How Much Does Metabunk.org Cost to Run?
How much does a storm weigh?
How Much Money Does Alex Jones Make?
CLAIM: "air at altitude doesn't deviate much statewide at any given time"
What would it take, and how much would it cost, to test a "chemtrail"
Engine Efficiency, High Bypass, and Contrail Frequency - How much?
BBC: "Too much weight to fringe views", says review
Three Contrails "Descending" over Denver on Jan 31, 2021 [Military, C-17A Globemasters]
Lasers Making Contrails
Curved and Looped Contrails in SoCal [San Diego Delays]
Crazy Contrails from LAX Ground Stop
Explained: Photo of 747 with Contrails Only on One Side [Fake, April Fool]
Infrared Photos of Clouds and Contrails
Moonlight Contrails
YouTube adds Encyclopedia Britannica article on Contrails to "Chemtrail" Videos
Aerodynamic Contrails at 27,000 to 31,000 feet near Sacramento
Sharp boundary between contrails and clear sky
Plane Flies in Front of Super Blue Blood Moon Eclipse
Contrail lobes or mamma? The importance of correct terminology
How Changing Weather Conditions Make Contrails Show Up
Contrail cross over Tasmania and spinning contrails over Victoria
Explained: Manurewa NZ, 'Extra-terrestrial' Fireball Jumps Up [Contrail, Altitude change]
Halifax, NS: Regularly Spaced Gaps in Contrails [Ethiopian Flight 501]
Some Perspective on Perspective Foreshortening - Contrails and UFOs
Explained: Viral Video of 787 Leaving Thick Contrails with Forced Perspective
A Plane Flying Across the Face of the Sun, with Contrails [Virgin Flight 353]
Contrails filmed from commercial flight over the Irish Sea - 6th May 2017
Contrails 'breaking up' clouds
Can someone tell me what these are? [Grid pattern contrails]
Can someone please explain these trails at sunset [Contrails]
There Are No New Clouds, Just New Latin Classifications
BBC: Biofuels 'could limit jet contrails'
Spiral Contrails viewed from the International Space Station
Claim: Satellite imagery showing 'sheet' of contrails
GOES-16 Satellite Images of Contrails
Explained: Contrails Appear "Hot" in Thermal Imaging because the Sky Appears Very Cold
Explained: Chilean Navy "UFO" video - Aerodynamic Contrails, Flight IB6830
Why do inner contrails spread more than outer contrails?
Contrails Hidden In 1950s and 1960s Family Photos
Four Engines, Flying West over Sacramento
Persistent Aerodynamic Contrails From Propellor Tips
A Sunlit Contrail Viewed From the Side
Close Up Videos of Contrails Forming And Evolving
Share:
Facebook Twitter Reddit Pinterest Tumblr WhatsApp Email Share Link