How Hot Could The WTC7 Fires Burned, and How Hot could the Steel be?


There's been a variety of threads here that (in part) discuss fire temperatures, but I thought it would be worthwhile to focus on WTC7 in the light of the Hulsey presentation, and the importance of fire spread and temperatures to the analysis of possible collapse sequences. This is largely information for context, and I draw no conclusions from it.

There's a large number of factors to consider when looking at fire temperatures. Of primary interest here are the "upper gas temperatures" which are the temperatures of the "air" (the gas in the room, a variable combination of normal air, smoke, carbon dioxide, water vapor, and other products of combustion) above the flames. Here's some numbers for context. I'll try to use °C throughout the thread for consistency.

There is fairly broad agreement in the fire science community that flashover is reached when the average upper gas temperature in the room exceeds about 600°C. Prior to that point, no generalizations should be made: There will be zones of 900°C flame temperatures, but wide spatial variations will be seen. Of interest, however, is the peak fire temperature normally associated with room fires. The peak value is governed by ventilation and fuel supply characteristics [12] and so such values will form a wide frequency distribution. Of interest is the maximum value which is fairly regularly found. This value turns out to be around 1200°C, although a typical post-flashover room fire will more commonly be 900~1000°C. The time-temperature curve for the standard fire endurance test, ASTM E 119 [13] goes up to 1260°C, but this is reached only in 8 hr. In actual fact, no jurisdiction demands fire endurance periods for over 4 hr, at which point the curve only reaches 1093°C.

"Flashover" is the point at which the room is full engulfed in fire, rather than local items in the room burning. It's the start of the "Fully Developed" fire, which will burn with maximum temperatures for some time.

The fires shows here appear to be fully developed with good ventilation. 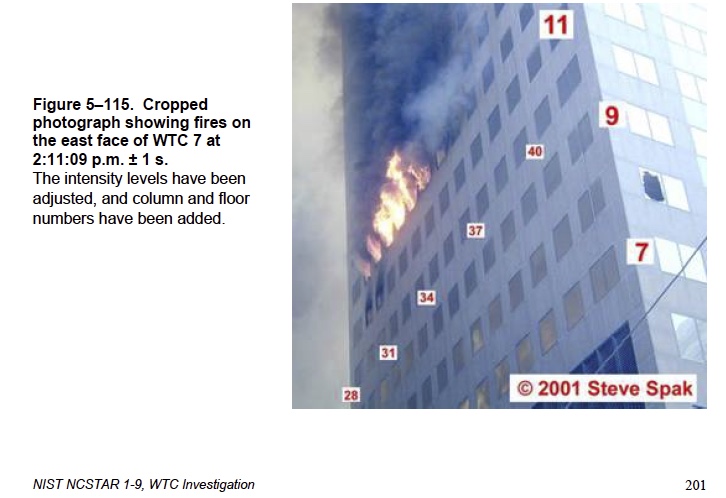 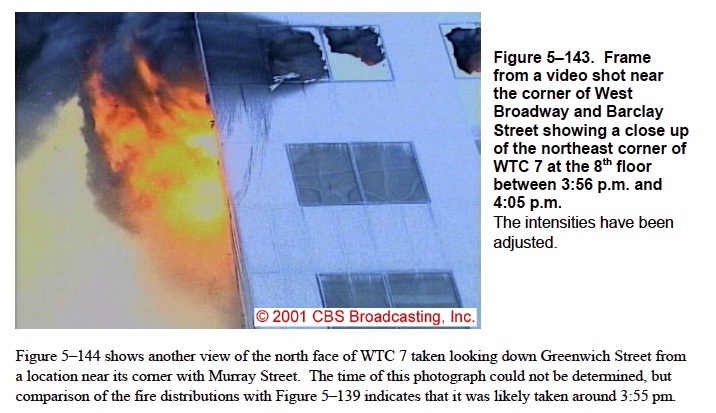 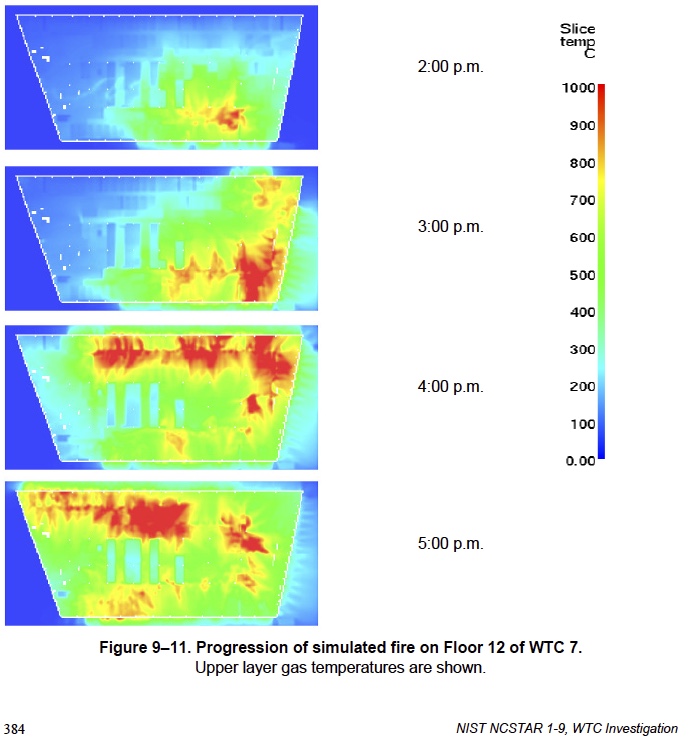 But there's also considerable variation on the simulation, just with a change to the ceiling tile system, we get at quite different fire pattern. 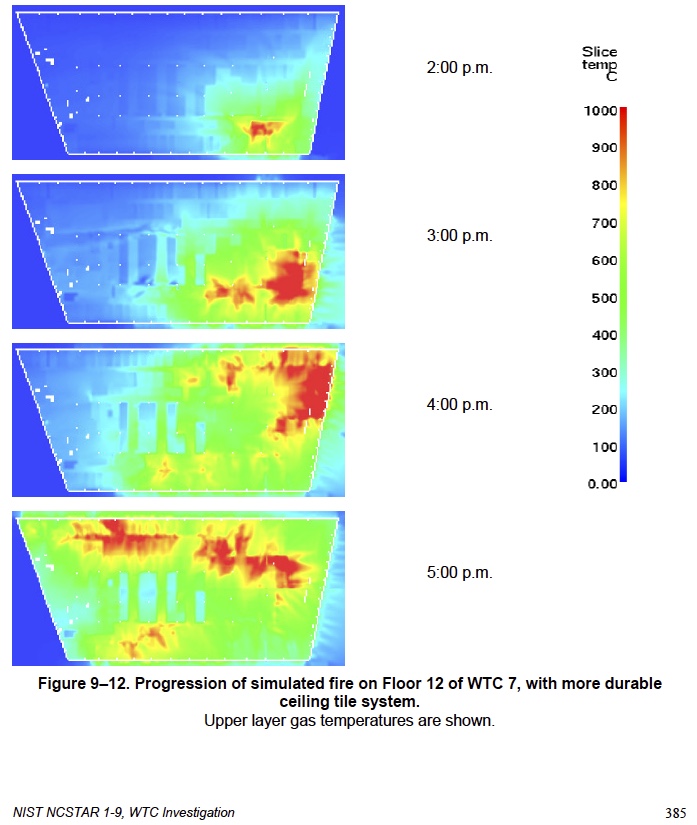 These are both simulations, not reality. However it seems quite reasonable that there would be areas of 900-1000°C upper gas temperatures for some time around the floor systems to the east and north of column 79.

Of course gas temperature is not steel temperature. There has to be a thermal transfer of the heat from the hot gas to the steel, often via the fire protection coating.

Mick West said:
Of course gas temperature is not steel temperature. There has to be a thermal transfer of the heat from the hot gas to the steel, often via the fire protection coating.
Click to expand...

any idea of what a beam girder temp would be for different gas temps and time of exposure. for ex: girder a2001.

I found this formula but I cant tell if it has steel mass type variables in it. (Or what any of the other math is or how to embed the actual formula here.)


In current codes, when calculating the temperature of uniformly insulated steel sections in fire, a 1D heat transfer model based on the lumped heat capacity method that assumes a uniform temperature within the steel section is used [11]. At the fire exposed surface, a Dirichlet boundary condition (T(0, t) = Tg(t)) is usually assumed for simplicity [11].

I've watched some of the UAF presentation by Prof Husley and I will add my thoughts on the issue of temperatures, flashover and the fire response of structural steel. I began at university as an engineering student, turned to the chemistry of materials, became a forensic scientist, and specialised as a fire investigator. I have a PhD in the inorganic chemistry of magnetic materials and just shy of 24 years in forensic chemistry with a long-term specialisation in fire and explosion investigation. Worked initially as a defence scientist on IRA, animal rights, islamic terror, multiple murder, arson, etc cases but for the past 20+ years I've been working for Insurers, lawyers, private corporations, government agencies, etc in Europe and Australasia in the field of fire/explosion investigation, associated litigation and the provision of expert advice and testimony.

Yes you can get pretty much what you want out of the many fire simulation models available and that's why there are dangerous instruments in the hands of those who don't understand them or how to interpret the results. Have used some very simple ones (the types that are used for design purposes for fire engineers) to get some "ball park" ideas of what might happen in single room or semi-enclosed fires. There are many variables and it is not surprising, to me at least, that the NIST models produced quite differing results depending upon how the ceilings were configured. The materials of construction of a compartment do influence the behaviour of a fire within it.

It is worth noting that not every compartment fire undergoes a flashover and you can do some simple tweaking of fire modelling software to demonstrate how flashover comes about or even using test rigs you can generate and stop a flashover or full room involvement event - I've seen it done on a variety of scales, one of which was the size of a doll's house. The mechanism of flashover is essentially down to a feedback process when the radiant heat flux from the hot gases at the ceiling is sufficient to cause ignition of the entire contents of the room (well everything that is in the line of sight at least) due to "spontaneous" (unpiloted) radiative ignition. This results in a very sudden change in the nature of the fire and is accompanied by a very rapid increase in heat output and sometimes can result in changes in pressure within the compartment. A so-called backdraft is one form of flashover event, just don't believe everything you see at the movies!

The key variables that determine if the fire will transition through flashover are to do with heat inputs, heat losses and ventilation. Too much or too little ventilation or too much in the way of heat losses then there will never be enough heat flux from the hot gas layer to cause the sudden change in fire behaviour.

Of these factors the heat release rate for a given fuel package or packages, will mainly determine what temperatures can be observed during a compartment fire that has undergone flashover, but again these "free burning" temperatures are also strongly correlated with ventilation.

As a side note, some other fires that didn't exhibit flashover didn't get there as firefighting was commenced early enough to prevent the transition from developing to fully developed.

In this case the fires on several floors of WTC 7 were clearly burning in post flashover "fully developed" or "decay" stages before collapse occurred. The video evidence confirms this.

Estimating the likely temperatures that were attained in those offices prior to the collapse is difficult, particularly as there is no physical evidence remaining so the usual fire temperature indicators are not present. But the research in this field is consistent with the NIST models. Temperatures in excess of about 900C to 1100C being found in post-flashover fires, with some fires producing even higher post-flashover temperatures.

As I said, the likely post-flashover temperature is mainly dependent upon heat release rates (HRRs) of the fuels and the available ventilation. Indeed post-flashover fires are usually characterised as either fuel- or ventilation-controlled. As fuel is consumed then the fire may move from being ventilation-controlled (short of air) to being fuel-controlled, where there is sufficient air but the amount of fuel is diminishing. Fires may also die back if there is very limited air or if the air movement changes significantly due to a variety of factors. If air then enters again these quiescent, smouldering, fires may begin to flame again. In this manner uncontrolled fires within the WTC 7 building could move around the various floors and repeatedly die back and re-ignite when local ventilation conditions change.

The HRRs for fuels are determined experimentally using calorimeters and Vyto Baubrauskas ,"doctorfire" who you quote from, did a great deal of work developing calorimeters. He was the first person to obtain a PhD in fire protection engineering. Accurate and representative HRRs are probably the most important issue in getting accurate modelling of post-flashover temperatures and the nature of the contents of the floors involved in the fire will have a large bearing on the HRRs. Substantial quantities of soft furnishings and plastics will contribute to HRRs more than stacks of papers, books, etc or more cellulosic materials.

As far as testing of structural elements and materials is concerned then BS476 and ASTM E119 have similar time-temperature curves used to simulate real fires under test conditions. They have temperatures of about 900-950C at the 60 minute mark, 1000C to 1050C at 120 minutes, 1100C to 1150C at 240 minutes and 1260C at 480 minutes in their standard fire tests. These are rough figures as the tests can be carried out with a range of fuels and using a range of furnaces that have walls of varying emissivity (radiative ability). But they do show how structure fires are expected to develop over time.

Regarding the actual temperatures that the steel will "see" in a fire, there are lots of complex issues here. One is that the steel will not just feel hot gases around it and thereby absorb heat from convective (buoyant) flows of hot products of combustion, but it will also feel radiant heat from the emissive flames and other radiating objects in the room. So it may gain (or lose) heat by a variety of mechanisms, some conductive, some convective and some radiative. The emissivity of a radiant object is related to temperature in a T^4 relationship so the temperature of the radiating objects is very important and this will be factored into the NIST estimates of steel temperature/time relationships.

Other complicating issues include the thermal response of the steel to heat which depends on many factors such as it's geometry, dimensions, density, size/shape and how it was protected from fire attack and how that protection itself responded to fire. These issues are probably beyond even the majority of the fire investigation community and I find myself struggling to keep up with the mathematics involved in the response of these structural elements to fire. But I am familiar with how steel deflects and distorts during fires and how it can move significantly as a result of fires of much shorter duration and intensity than those in WTC 7. I have seen plenty of real world fires where steel joists have pushed out walls, pulled themselves off columns/hangers and where these structural elements have been radically altered by the heat from prolonged fire exposure.

H
How high could the plane have hit, and still caused a total collapse?