Heracleion, a lost city, recycling news, and profiting from Matrixism.

Staff member
Heracleion is an ancient Egyptian port city that ended up submerged in the Mediterranean, probably due to earthquakes, over 1,000 years ago. 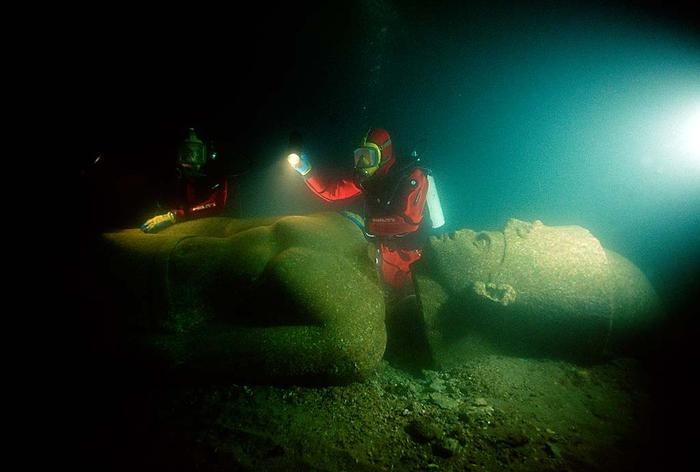 It was discovered in 2000, and many impressive artifacts were raised up in 2001. As seen in this BBC article:

Thursday, 7 June, 2001, 15:46 GMT 16:46 UK
Spectacular finds of lost city revealed
Treasures of the ancient sunken city of Herakleion off the coast of Egypt have been revealed to the public for the first time.A joint Franco-Egyptian team of underwater archaeologists displayed some of their most spectacular finds at a press conference in Alexandria.

Herakleion was Egypt's main port in the time of the pharaohs.
Until its rediscovery last year, it was known only through Greek legends and a handful of ancient history books.
Researchers believe the city was sent to the bottom of the Mediterranean after an earthquake rocked the region more than 1,000 years ago. 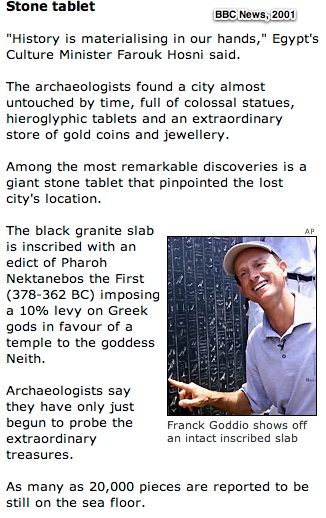 Content from external source
Very cool stuff. And the story was recently resurrected due to a new German TV documentary. Rather oddly though the story is being presented in some media almost as if these things have only just been discovered, such as in this story from the Daily mail

An ancient Egyptian city swallowed by the sea more than 1,200 years ago has started to reveal its secrets.

Items including 16ft sculptures, gold coins and giant tablets are among some of the objects recovered from the ancient port city which lies 20 miles northeast of Alexandria in the Mediterranean.


Content from external source
So I suppose it was not surprising to see this crop up in my Facebook feed: 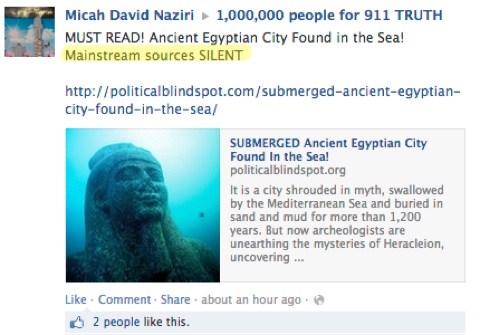 The link takes us to:
http://politicalblindspot.com/submerged-ancient-egyptian-city-found-in-the-sea/

A site that simply copies this article from the Huffington Post:
http://www.huffingtonpost.com/2013/04/29/heracleion-photos-lost-egyptian-city_n_3178208.html

PoliticalBlindSpot.com is very heavy with ads. Clicking on anything bring up very annoying full page ads, and yet their description reads as if they are on a mission to fight the forces of evil.

Political Blind Spot is dedicate to reporting and circulating newsworthy stories that have either been underreported by the media or completely ignored.In many cases – most even – articles will derive from news reports from mainstream news sites, so as to make it clear to the reader that these are not stories lacking in credibility, they have simply been swept under the rug, through either government pressure or private industry self-censorship.
In other cases there will be stories which we break, as well as editorials. In any event, we strive for excellence, fact-checking and welcome any constructive criticism or news updates to stories posted

Content from external source
And yet we have this very mainstream story. Essentially a puff piece promoting the German documentary, a story that only really exists because of the wonder of the buried city, and all the pretty photos. But it's not news in any way at all. There's practically nothing to the story that was not reported in 2001, or in the several TV documentaries on it since that time.

So this mainstream non-story is getting promoted as "MUST READ! Ancient Egyptian City Found in the Sea! Mainstream sources SILENT".

"Mainstream sources silent" is quite obviously untrue. But what we are seeing here is the promotion or the spreading of a particular mindset - "Matrixism". Matrixism is the belief that we are living in a constructed media reality. That EVERYTHING you see in all media is deliberately scripted for nefarious purposes. Matrixists believe that the Sandy Hook massacre and the Boston Bombing were staged. This particular post was in the Facebook group "1,000,000 people for 911 Truth" (a group with 8,829 members, not bad, but still a ways to go). The 9/11 attacks are also believed by the Matrixists to have been staged, along with every war ever and pretty much all the terrorist attacks. And once you believe all that, it's pretty easy to believe anything.

It seems like Political Blind Spot is simply attempting to profit from this mindset, by taking mainstream stories that appeal to the mindset, copying them verbatim, labeling them as having been somehow softly covered up, and then getting like minded people on Facebook to spread the message. Far from "striving for excellence", it looks more like they are striving to make a quick buck from the wide open minds of the Matrixists.
Last edited: Nov 20, 2013

I wonder what determines when a story is a false flag distraction to manipulate, and what is a real event that is being suppressed?
How do they know this discovery isn't a false flag?
And how does the suppression of an archaeological find suit anyone's imagined agenda?
You must log in or register to reply here.