While paying a visit to the place of my childhood in Russia ten days ago (September 15, 2016), I spotted this very unusual contrail: 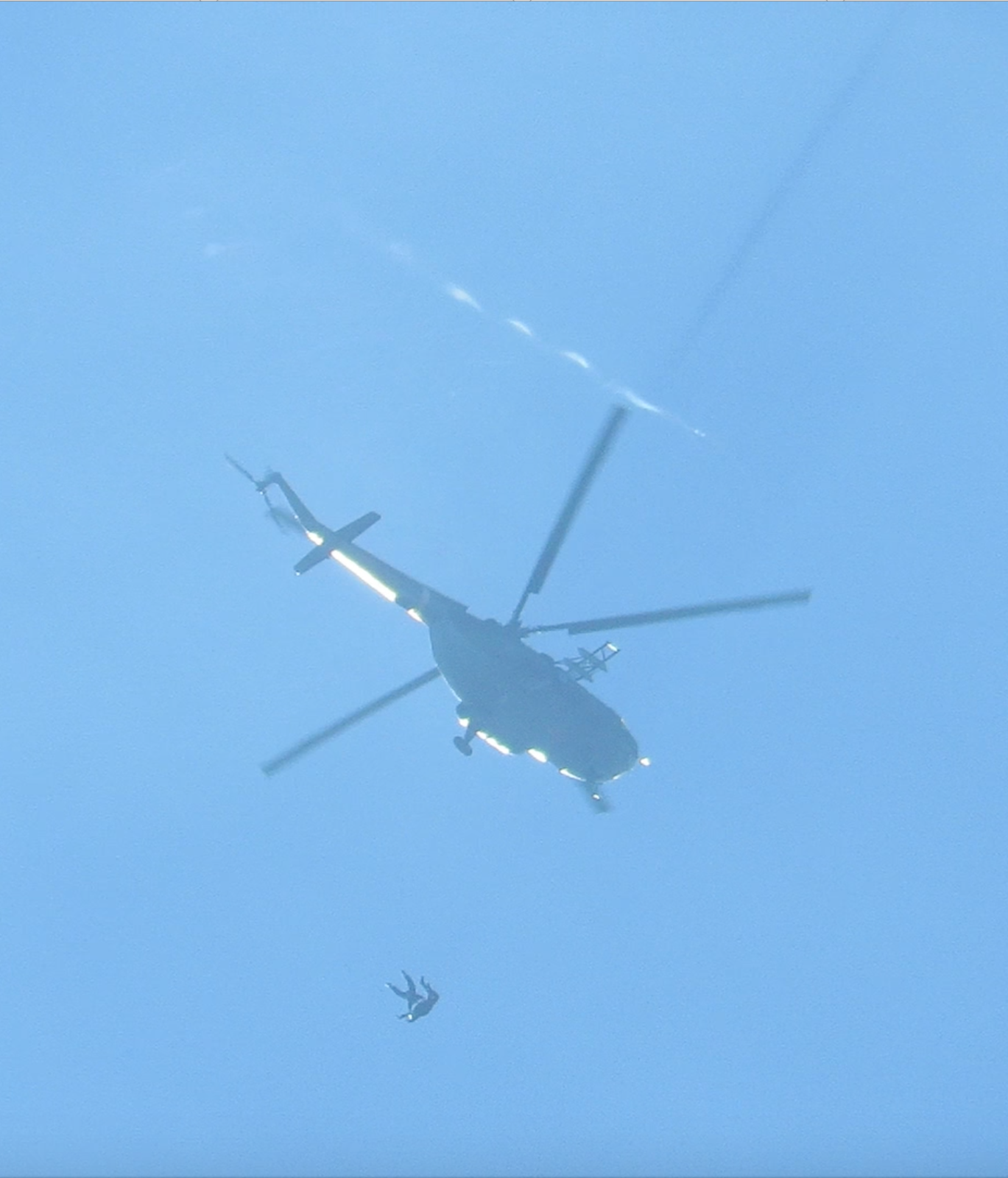 A local Aero Club regularly hires a Mi-8 (Mi-17) "Hip" helicopter for skydiving and related activities. It takes the jumpers to the altitudes of 2500 metres (8000 ft) or higher. I watched them from the ground about one kilometre from the airfield. While zooming at the helicopter as it reached the jumping altitude, I noticed a short white trail coming from the tips of the rotor blades on one side of the helicopter. Apparently associated with the blade tip vortices, this linear trail looked nothing like the vortex spirals behind moving helicopter should look:

However, the linearity of the trail can be readily explained by the vapour condensation occurring not along the entire blade tip path, but only at a particular point, the position of which is fixed relative the helicopter. Indeed, this was the case, as the following video (slowed down ten times) shows:
Source: https://youtu.be/Y4Kw23px6vk?t=21s

As each retreating blade tip passes the point at about right angle to the forward direction, it adds a short curvy dash of new condensation at the beginning of the trail. Sometimes it also creates a longer but less persistent contrail arc after the dash.

The volumetric shadows cast by the helicopter blades, when they are aligned with the Sun, suggest that the surrounding air is very humid indeed, so the pressure drop on the top of helicopter blades is very likely to trigger condensation. But why does the condensation occur only in this particular point? The answer to this is directly linked to the answer to "how do helicopters move forward?" In horizontal flight the blade pitch (angle of attack) is not fixed but cyclicly changes with the maximum angle being at the retreating blade at about 90° to the flight direction, that is, in the same point where the contrail was forming. At the maximum angle of attack the blade creates the maximum lift and hence the highest pressure drop between the top and the bottom of the blade. The blade pitch then decreases to the minimum at the opposite side of the rotor with the pressure drop values getting lower than required for the triggering condensation.

I also have posted on youtube another video of the same helicopter with better close-ups but no contrails
Last edited: Sep 25, 2016

The second time I witnessed the same contrail type happened yesterday, one year and a bit after the first one: 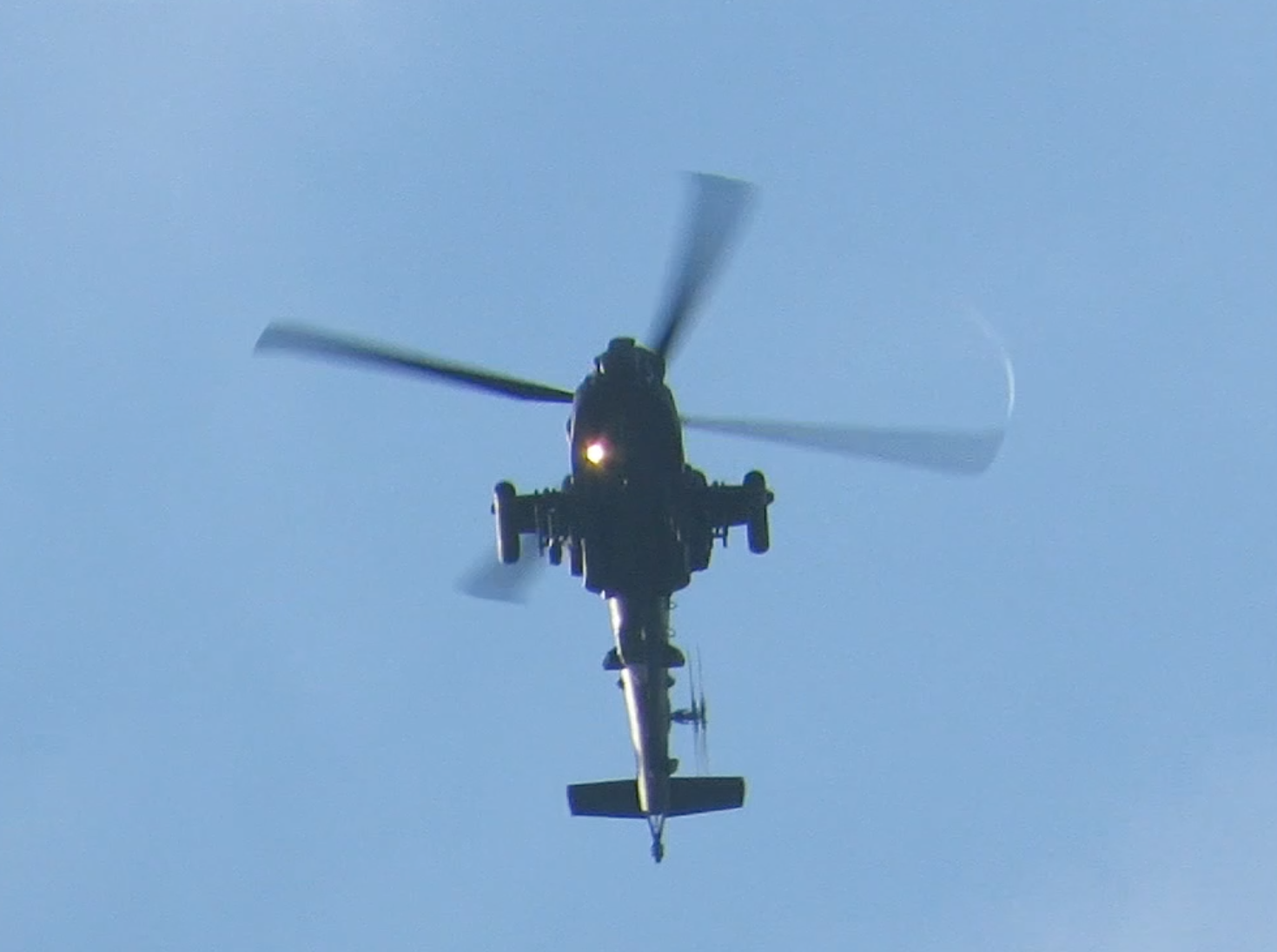 Like the first time, the rotor blade tip contrails were forming at one particular point, where retreating blade was at about right angle to the helicopter's forward direction. Unfortunately, these contrails were too short-lived with individual dashes dissipating before the formation of a new dash.

Trailspotter said:
At the maximum angle of attack the blade creates the maximum lift and hence the highest pressure drop between the top and the bottom of the blade.
Click to expand...

In level flight both sides must produce the same lift moment, but the distribution of lift is different along the blade.

Clouds Givemethewillies said:
In level flight both sides must produce the same lift moment, but the distribution of lift is different along the blade.
Click to expand...