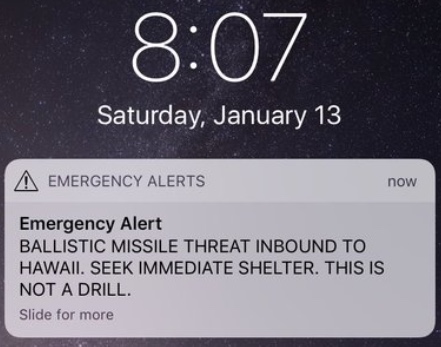 Hawaii Emergency Management Agency spokesman Richard Repoza said it was not immediately known what caused the false alarm but that the agency was trying to determine what happened.

The alert set off panic among many residents, as well as across social media.

Content from external source
Must have been pretty terrifying for a large number of people. The root cause is going to be some kind of human error, but of course it's going to get called some kind of "False Flag", from the "there are no accidents" crowd.

Event: Civil Danger Warning
Sender Name: Hawaii Emergency Management Agency,HI
Issued: 2018-01-13T11:07:08-07:00
Expires: 2018-01-13T21:07:08-07:00
WEA Text: BALLISTIC MISSILE THREAT INBOUND TO HAWAII. SEEK IMMEDIATE SHELTER. THIS IS NOT A DRILL.
Description: The U.S. Pacific Command has detected a missile threat to Hawaii. A missile may impact on land or sea within minutes. THIS IS NOT A DRILL.
Instruction: If you are indoors, stay indoors. If you are outdoors, seek immediate shelter in a building. Remain indoors well away from windows. If you are driving, pull safely to the side of the road and seek shelter in a building or lay on the floor.

Content from external source
The audio link is still active (11:53 AM PST), attached.

There were earlier corrections in the media and twitter.
Last edited: Jan 13, 2018

There are several Youtube prank videos where...... somewhat realistic and displayed "emergency broadcast system warnings" would appear suddenly on the family's TV, and are staged to scare (prank) family members or friends into thinking missiles are "inbound" or some other horrible impending disaster, and their reactions are recorded and uploaded.
I'm not suggesting this was the case here, but I am keen to find-out if the EBS in this case was genuinely an accident, or the EBS system was hacked somehow ?

Amber Alerts... are sent to cell phones and in the US, called the WEA,...Wireless Emergency Alert system, sent to all WEA enabled cell phones.

The alert was sent to every island in the Hawaiian chain and every cellphone in the state of 1.4 million people, emergency management officials said.

Leifer said:
I'm not suggesting this was the case here, but I am keen to find-out if the EBS in this case was genuinely an accident, or the EBS system was hacked somehow ?
Click to expand...

Governor Ige was on CNN and said the cause had been determined. Somehow (in his words, "somebody pressed the wrong button," that could be literal or it could be a simplification) the alert got triggered during a shift change, which delayed identifying and fixing it.


It seems to me if it were that trivial to trigger it would be equally trivial to fix, but it's conceivable that because it's a serious alert with a likely short warning period that it could be made easier to issue than to take back. And this is an alert that's never been issued and never had to be taken back, so I can imagine a bunch of people flipping through disused manuals trying to figure out how to fix it, probably with a fair amount of blame passing going on.

Every job I've had, shift changes are the worst time for shit to hit the fan. You've got twice as many people in the building, but half as many on the job and sometimes unclear lines on just who's responsible for what because there's two people for every seat.

If the person who screwed up was basically out the door when it happened, their replacement needs to figure out what they did and how. And if they didn't realize it was a mistake and instead got the alert as they left work... Well, some people will immediately think they could have screwed up and go back in to see, and some people will be absolutely sure they didn't and join the panic, calling their loved ones is going to be more important than going back to work and clocking a few minutes for a job you don't think you'll live to be paid for.


Edit: A few other sites I go to have a lot of discussion on how differently this would have played out with a different president, because Trump was golfing and according to some reports didn't answer his phone (according to others he wasn't called, which I find more likely as I explain below). The three flavors of this claim:


A and B are both silly. This was a state level emergency broadcast system. Even if a president is utterly off his rocker like Martin Sheen in The Dead Zone, the joint chiefs and secdef aren't going to be on board with a second strike based on a state emergency alert when launch detection systems are quiet, and NORAD's not going to go to DEFCON 1 over an alarm not coming from their own systems.

C is... Well, maybe. It's true Trump has restricted media access more than the last several presidents, who have been perpetually trailed by a media circus wishing to happen, but 40 minutes is still a tight window. On 9/11, George W Bush hastily threw together his first TV appearance in a Florida school room where he'd been doing a photo op, and that took 44 minutes after the first attack.
Last edited: Jan 14, 2018

Hevach said:
It seems to me if it were that trivial to trigger it would be equally trivial to fix, but it's conceivable that because it's a serious alert with a likely short warning period that it could be made easier to issue than to take back. And this is an alert that's never been issued and never had to be taken back, so I can imagine a bunch of people flipping through disused manuals trying to figure out how to fix it, probably with a fair amount of blame passing going on.
Click to expand...

Miyagi, a retired Army two-star general, then explained that an individual on his team sent the alert in error, even clicking through a redundancy on a computer screen intended to act as a safeguard from such a mistake.

He said that the incident occurred shortly after a scheduled 8 a.m. local time (1 p.m. ET) shift change. At the beginning of each shift, Miyagi said, his team conducts a routine internal test that involves the Emergency Alert System and the Wireless Emergency Alert.

Now since it's "just" a warning, the safeguards were a bit less strict than sending nuclear missiles, so that allowed a distracted person to make two or three mistakes, and bam!

Wikipedia has a list of 'false alarms' using the both the Emergency Alert System and the preceding Emergency Broadcast System, there was an incident in 1971 where someone put the 'wrong tape' into the machine during an exercise and triggered a nationwide alert.

More pertinent to this event are the testing errors in the 2000's especially the September 2017 incident in California where the end-of-test message was not sent and a bible reading from one of the regional affiliates of the station that handles the emergency alert system, containing the words "extremely violent times will come" was broadcast over a wide area.

As to the scenario Mike outlines, it's very real and has happened in the past in other circumstances, the classic example is the 1974 crash of Northwest Airlines Flight 6231, where the crew took off with engine heaters on/pitot tube heaters off after someone in the cockpit flipped switches apparently without checking what he was doing. This resulted in false speed readings being sent to the crew, who stalled the aircraft as a result

(Edited to a better source)
http://www.businessinsider.com/hawa...red-in-photo-sparks-security-criticism-2018-1

Some details, both from the state agency and from internet sleuths.


This tweet has a picture of the interface for the system, which appears to be HTML based. The person responsible clicked on "PACOM (CDW) - STATE ONLY" when they were supposed to click "DRILL - PACOM (CDW) - STATE ONLY." Procedures were the same from there so by the time the error was realized the alert had been sent.

There's another bit in the above article, but it goes back a ways. Last July, agency operations officer Jeffrey Wong posed for an AP photograph in which two suspicious post-it notes are visible on monitors. On one is a legible password, and on another is a reminder to sign out when you leave your station. According to the agency, the password was real, but was to an internal system not exposed to the internet, and had expired and been changed before the false alarm. But critics are using it to ask questions about their cybersecurity practices anyway.


This is a classic example of how robust password policies can actually degrade security. Passwords, especially shared passwords that many people need to know, get written down and left out. Overly complex or frequently changed passwords get written down as well, and the only people being kept out of accounts are their owners.

The broadcaster NHK in Japan ALSO issued a false ballistic missile J-alert, but only through their phone app and not general emergency channels as happened in Hawaii. Unlike the US, where this is an alert that's never been issued in earnest, Japan has issued these alerts, such as last year when North Korea launch missiles over Japanese airspace, so while people take them seriously, there's perhaps less of an edge of panic to them compared to what we saw in Hawaii.
Last edited: Jan 17, 2018

That is not a screenshot of the actual system. So far it seems that no actual screenshots have been released for security reasons. Those are merely mockups of the options available to operators of the system.


Having experience with government IT systems, I'm surprised that false alarms like this don't happen more often. The operators should be applauded for being able to navigate the maze of bad UI correctly 99.9% of the time.

You mean pressing the weekly "system test button", rather than the "not a drill" button ?
On my Windows machine, I can't install an app without at least 2 definite (decision) clicks.

Leifer said:
You mean pressing the weekly "system test button", rather than the "not a drill" button ?
On my Windows machine, I can't install an app without at least 2 definite (decision) clicks.
Click to expand...

You can be guaranteed for a fact that the system they're using for this critical process has had much much less time, thought, effort, and money invested into it than Windows.

Yeah, a lot of business and government systems are like that. Training and accountability are cheap, robust software engineering is expensive.

Recently (see this post date), the employee responsible for actuating the alert, admitted he/she actually thought there was an imminent threat, and sent the alert on purpose.....supposedly because the employee mis-took a drill, for the real threat.

The Hawaii employee who sent out a false alarm warning of an incoming missile attack earlier this month said he misunderstood that a drill was underway and believed that a ballistic missile had actually been fired at the state, authorities said Tuesday.
https://www.washingtonpost.com/news...le-alert-the-fcc-says/?utm_term=.62c34214a05d

The governor tried to send a tweet to allay concerns, but was locked out of his own twitter account. Presumably due to the lack of a post-it note.

This is just a comedy of errors all around, nobody comes out looking good at their jobs.
You must log in or register to reply here.

Anonymous: False Flag 9/11 Style Attack in LA in May Be Imminent (on or around November 15th)