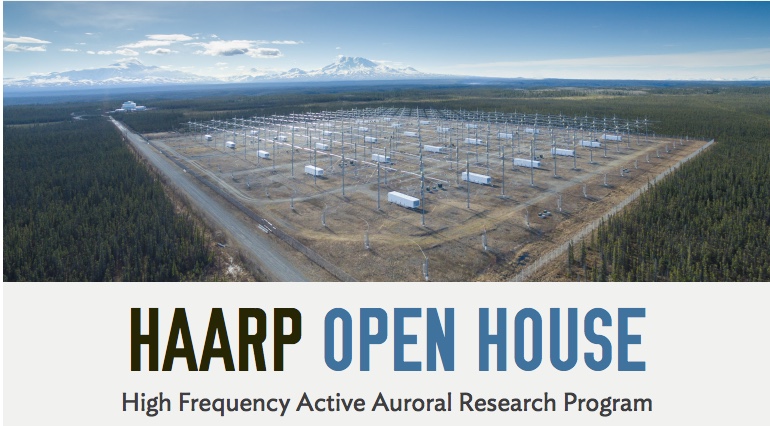 After a two year hiatus, HAARP (The High Frequency Active Auroral Research Program) has returned. HAARP is a powerful transmitter array that uses radio waves to slightly heat a bit of the ionosphere so it can be studied. It was previously run by the US Navy, but they completed their work there and closed it down. After some negotiation for funding control of the site was turned over to the University of Alaska, it was refurbished, and is now set to re-open.

On Saturday, August 27, 2016, they will hold an open house, mostly for the locals, as it's in a remote area of Alaska.

HAARP is the source of many conspiracy theories, mostly because it's very complicated, and far beyond the understanding of the majority of people. So it's quite easy to bamboozle people into thinking it is something it is not. In a previous discussion thread on exactly what HAARP does, things very quickly got overly complicated. But one useful thing was this diagram that showed the area that HAARP can affect. Just the bit at the top of this column: 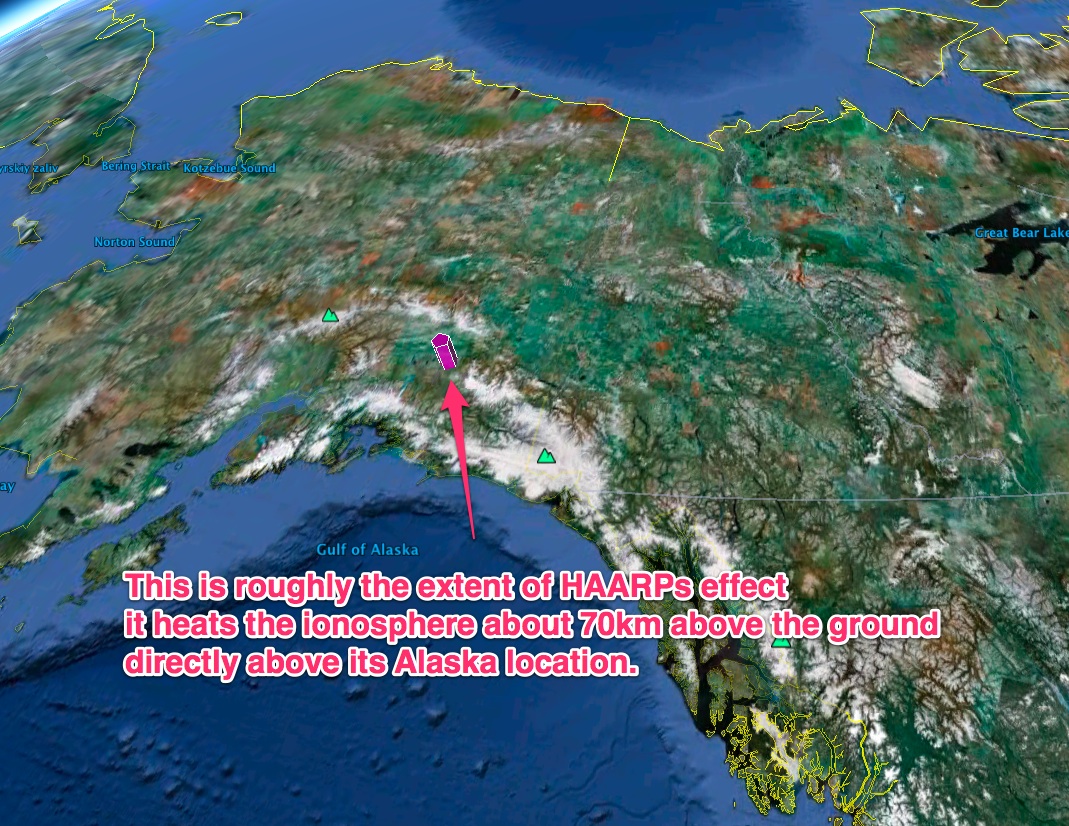 Which is even smaller if you look at it in perspective, and compare it to a weather system: 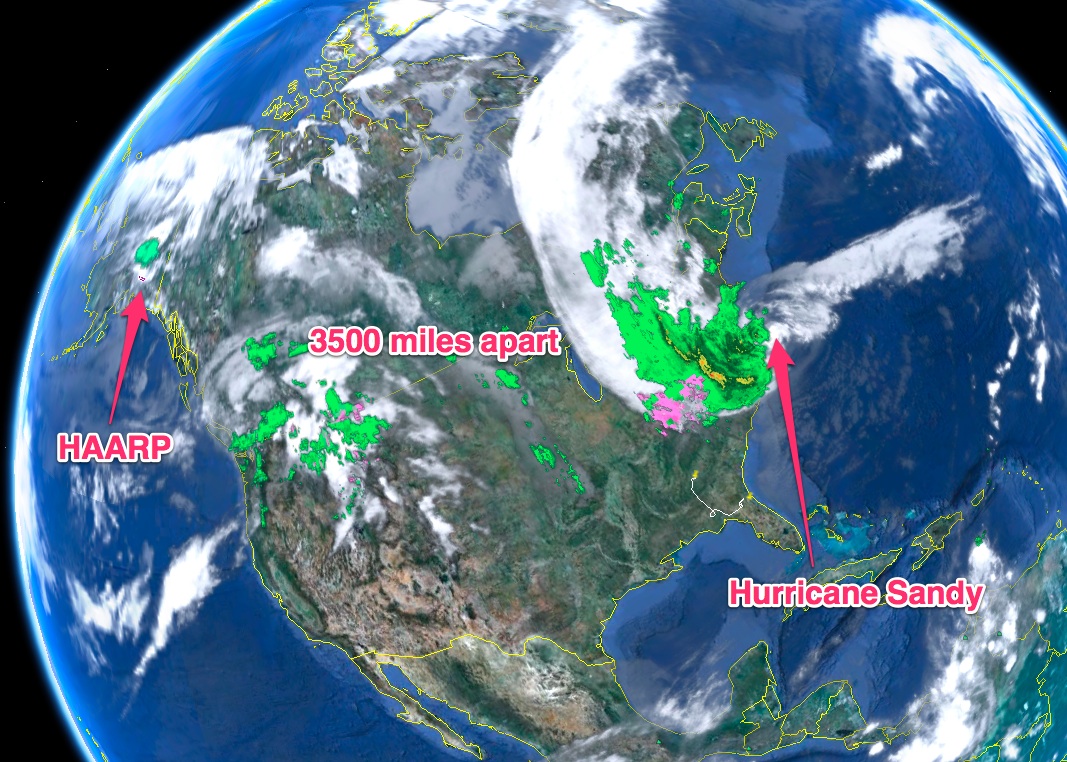 The university are obviously aware of the conspiracy theories, and have a FAQ that covers the most relevant questions
http://www.gi.alaska.edu/haarp/faq
examples:


Is HAARP capable of affecting the weather?
The HAARP facility cannot affect the weather. If the ionospheric storms caused by the sun itself don’t affect the surface weather, there is no chance that HAARP can do so either. Transmitted energy in the frequency ranges that will be used by HAARP is not absorbed in either the troposphere or the stratosphere—the two levels of the atmosphere that produce Earth’s weather. Electromagnetic interactions only occur in the near vacuum of the rarefied region of the atmosphere above about 70 km (a little over 45 miles), known as the ionosphere.

The ionosphere is created and continuously replenished as the sun’s radiation interacts with the highest levels of the Earth’s atmosphere. No association between the ionosphere’s natural variability and surface weather and climate has been found, even at the extraordinarily high levels of ionospheric turbulence that the sun can produce during a geomagnetic storm.

Can HAARP create a hole in the ionosphere?
No. Any effects produced by HAARP are miniscule compared with natural day-night variations that occur in the ionosphere. Several ionospheric layers completely disappear naturally over a whole hemisphere during the evening hours. HAARP can’t come close to producing this effect, even in the limited region directly over the site.

Maybe they will invite Jesse Ventura?

UAF officials are hoping for a high turnout.

"We hope that people will be able to see the actual science of it," said Sue Mitchell, a spokeswoman for UAF's Geophysical Institute, which operates the facility. "We hope to show people that it is not capable of mind control and not capable of weather control and all the other things it's been accused of."

Although...its not currently in operation and hasnt been for awhile and will not be open until 2017:

It's actually going to be on Saturday, August 27. There will be a science lecture on August 26 in the evening.
The "HAARP Report" guy should go.

skephu said:
It's actually going to be on Saturday, August 27. There will be a science lecture on August 26 in the evening.
The "HAARP Report" guy should go.
Click to expand...

I kind of hope some conspiracy theorists do actually go, and talk to the scientists.

Mick West said:
I kind of hope some conspiracy theorists do actually go, and talk to the scientists.
Click to expand...

I don't think that would be a good idea... I could definitely see the CTs harassing/insulting/threatening/assaulting the scientists for not agreeing with their theories. We're talking about people who don't bat an eyelid at the prospect of killing hundreds of innocents by taking down commercial airplanes, here (although some rationalize this by saying that those planes are not actually carrying people).

Holy Irony said:
I don't think that would be a good idea... I could definitely see the CTs harassing/insulting/threatening/assaulting the scientists for not agreeing with their theories. We're talking about people who don't bat an eyelid at the prospect of killing hundreds of innocents by taking down commercial airplanes, here (although some rationalize this by saying that those planes are not actually carrying people).
Click to expand...

That's a rather excessive generalization. Besides the most extreme believers are not going to go.

There are some researches by HAARP around the web, this one for example:

There are quite a few hypotheses on the effects of the ionosphere. Can anyone provide some more links on studies, in which the HAARP project has participated?

Also, aside of the conspiracy theories, I do not exclude that HAARP might have some negative effect on people and environment, not necessarily affecting the weather. But any scientific experiment has its risky side, take Tesla's research on lightning for example.

Isn't reopening the HAARP experiments in violation of the international treaty that we signed that was attempting to curb or eliminate weather experimentation? Not that we ever intended to abide by it anyhow, I'm sure there was plenty of phony smiles and handshakes at that table.

HAARP is unable to affect the weather, so no, it isn't.

Also, the Environmental Modification Convention only bans experiments that use weather to cause damage, death, or destruction. Modification of weather for any other purpose is kosher. So even if you consider the phenomena HAARP works with to be weather (they aren't), it still doesn't apply. The Convention on Biological Diversity (which the US did not ratify) is somewhat weaker, as it only deals with the planning phase of such work to evaluate and mitigate the potential impact on biodiversity.
B

HAARP has been running experiments recently:

I'm glad to see that the HAARP was rescued from the mothballs. The facility is unique and will serve as a platform for doing a great deal of interesting science.
You must log in or register to reply here.