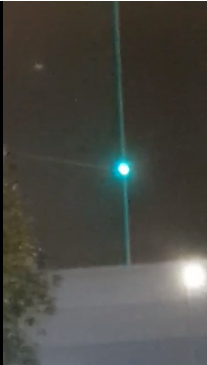 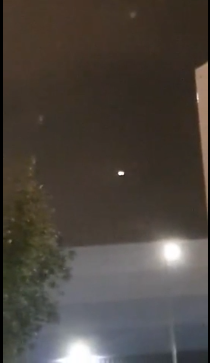 Photo of when it's blinking and not blinking.

I came across an 18 second video of a green flashing light in the sky, it seems to have gotten the attention of a few people in the area but other than that it seems to be rather a non-story. The creator of the post didn't know what it was, most people in the comments said it's either a drone or cell tower, however, one commentator said this

It wss [sic] a company testing their laser.

They had permission to do it so it was not illegal.

After trying find any news on this, I came across Milton Keynes Citizen news paper which has it's own video and photos (you do have to get through a thirty second ad in order to watch the video but basically the video looks very similar to the one I posted above, the only difference is that it's not blinking and seems to have multiple beams, I'll attach the pics below.) 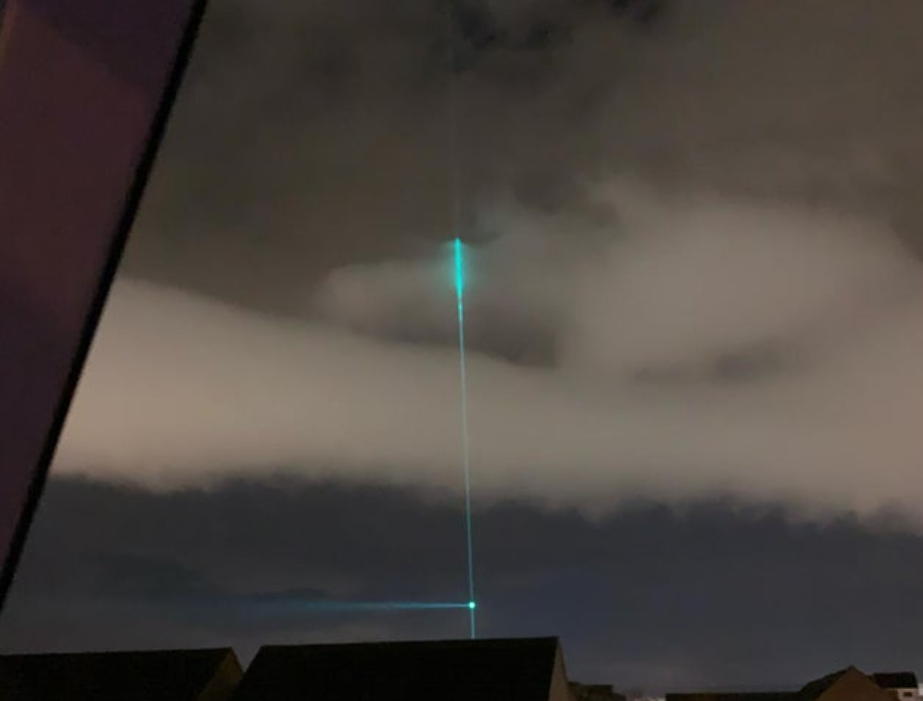 https://www.miltonkeynes.co.uk/news...ts-green-laser-beam-milton-keynes-sky-2983353
Interestingly enough, one of the witnesses concluded that it was a tech company that was testing a laser.


"I decided to get in the car and see where it took me. It was coming from a factory in the industrial estate in Kingston..."
...
After some research, Westley believes it was a laser test carried out by a tech company based in the Midlands.

This seems like a pretty much open and shut case, I just wanted to confirm with people that probably know more about lasers than me if this does look like a company-grade laser and if tech companies do indeed carry out tests like that.

could it be a bird poo prevention device? (i'm only phrasing it so silly, because if this is the answer it will be our 3rd thread where "bird poo" is the answer )

About 3,000 black-headed gulls made their home on the roof of Charles Tyrwhitt's warehouse in Milton Keynes, reports BBC Inside Out in the East.

The birds, which produce faeces which can also damage buildings, were dispersed by use of laser beams.

deirdre said:
could it be a bird poo prevention device? (i'm only phrasing it so silly, because if this is the answer it will be our 3rd thread where "bird poo" is the answer )
Click to expand...

Haha, that seems to be a common thing, it's actually quite amusing haha
P

I managed to speak with the user who said he went to the source of the laser and this is how the conversation went: 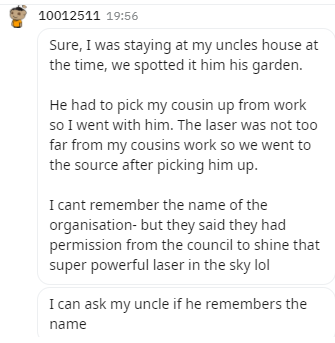 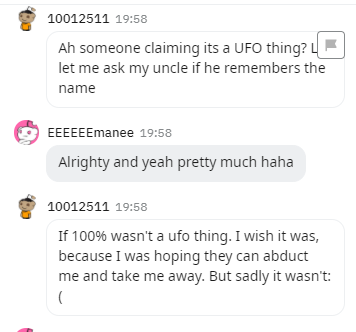 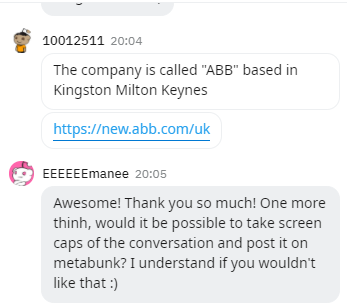 The user was very helpful with the case and I really appreciate it. But essentially case closed, it was a laser test.

Quite a nice laser there.
It also seems they are hitting something (drone?) above it as you can see the reflection from it to the left.
E

So I have a slow post-Christmas morning to kill here and ended up looking a tad further into this. Since whoever did this was shining a bright laser at the sky, they would have had to obtain permission from the authorities, which would have involved putting out a NOTAM (notice to airmen) to warn pilots flying in the area at the time. The FAA provides a handy search tool at https://notams.aim.faa.gov/notamSearch/ - select 'Archive Search', set the date to Sep 24, 2020 (the date mentioned in the article) and the location to 'EGTT' (the Flight Information Region for which this NOTAM would have been published) and lo and behold you'll find this.

This message was valid from 1500 UTC to 2259 UTC on Sep 24, warning pilots of a laser display within a 2-mile radius around 52°02.34'N, 000°46.54'W, which is a parking lot near central Milton Keynes. (see here - https://www.openstreetmap.org/?mlat=52.03900&mlon=-0.77567#map=19/52.03900/-0.77567). The phone number points to a company named Kvant Lasers UK, based in Daventry. I redacted the number past the area code for privacy reasons even though you'll find it posted right on top of their website when you look them up. Amongst the products they offer is a relatively new range of outdoor sky beam lasers called 'Architect', which this incident might have been a test of. They also mention some sort of 'automated laser beam tracking and targeting device', which the drone-like device could have been a part of?

This does however not align with the name of the company given by the guy who said he went to the source. The area given in the NOTAM also does not include the 'industrial estate in Kingston' mentioned in the article. Assuming they're talking about the 'Magna Park' area, this would be more than 2 nm east of the the parking lot, placing it outside the hazardous area. Whether that is because the witness misplaced the source, or if for some reason the company ended up testing their equipment there instead, is something I don't know of course.

For what it's worth, that laser company seems to do these tests from other locations too as there are a number of NOTAMs when you search for the phone number given in each one.

EDIT: For illustration purposes, I might as well add this picture showing the affected 2-mile radius.