In response to the question 'Some believe that we are being sprayed. Do you agree or disagree with that view?', 33% of respondents said yes, 58.4% said no while 9% didn't know or didn't answer 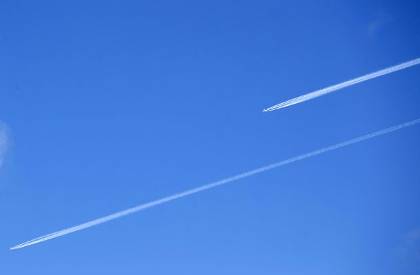 Is it a bird or a plane ... or traces of chemical being sprayed high in the sky? (Photo: Reuters)

Three in ten people believe that Greece is being sprayed with chemicals by airplanes flying over the country, a poll published in a Sunday paper has found.

The Metron Analysis survey for Ethnos on Sunday newspaper found that belief in so-called "chemtrials", a conspiracy theory that claims that some trails left by aircraft are chemical or biological agents deliberately sprayed at high altitudes for nefarious purposes, remains strong.

The "theory" holds that these spraying campaigns are secretly directed by governments.

In response to the question "Some believe that we are being sprayed. Do you agree or disagree with that view?", 33% of respondents said yes, 58.4% said no while 9% didn't know or didn't answer.

Although MPs from the Independent Greeks party have raised the issue of chemtrails in parliament, only 6.1% of those who said they believed in the notion said they would vote for that party.

Proportionally more women (39%) believe in chemtrails than men (27%), the survey suggests. The theory is also more popular among under 25s, of whom two in five believe in the notion, as well as farmers (45%) and workers (48%).

Concern over chemtrails pushed the Greek air force to issue a statement in May 2012 stating that that there were no airplanes spraying Greece with chemicals.

The question is leading. Saying that 'some believe we are being sprayed' encourages more positive responses.

Cairenn said:
The question is leading. Saying that 'some believe we are being sprayed' encourages more positive responses.
Click to expand...

Also, I agree 100% with the view that 'some believe that we are being sprayed'. I'm also fairly certain that those people are wrong.

l'm sure the intent was 'do you agree with them?', but the question isn't really asking that, is it? Or is it? Something lost in translation, perhaps?
Last edited: Oct 14, 2013

They planted a 'seed'.


The most striking—and perhaps most unsettling—aspect of our study is that the actual blog post about the topic of nanotechnology was neutral, with equal amounts of risk and benefit information across conditions. The incivility instigated by lay (albeit fictional) online users induced an increase in polarization of risk perception about nanotechnology. This study's findings suggest perceptions towards science are shaped in the online blog setting not only by “top-down information,” but by others' civil or uncivil viewpoints, as well. While the Internet opens new doors for public deliberation of emerging technologies, it also gives new voice to nonexpert, and sometimes rude, individuals.