Staff member
A video of an "unidentified 6ft tall creature" filmed in Canada is doing the rounds, eg: https://www.thesun.co.uk/news/69285...potted-stalking-a-moose-in-canadian-woodland/

SPOOKY footage of a "Gollum-like monster" creeping through woodlands in Canada has left the internet petrified.

Video of the mystery beast - which seems to be stalking a nearby moose - has emerged and it is the stuff of nightmares.

The shocking clip was captured by Audree Frechette in Quebec's isolated Gaspé Valley.

The 6ft tall monstrosity was caught on film while the Canadian filmed a moose feeding by the side of the road.

It was only when Audree looked back at the footage she spotted the human-like creature lurking in the shadows.

However it appears to be simply a bit of dirt on the car windscreen:


There is another mark above and to the right of the "monster" which keeps exactly the same relative position, as both marks move relative to the background (hard to see on these screengrabs, but easier to see on the video) 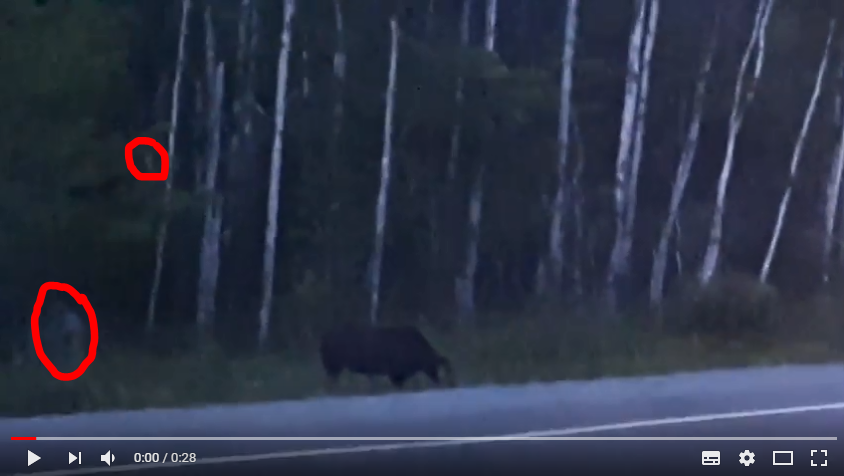 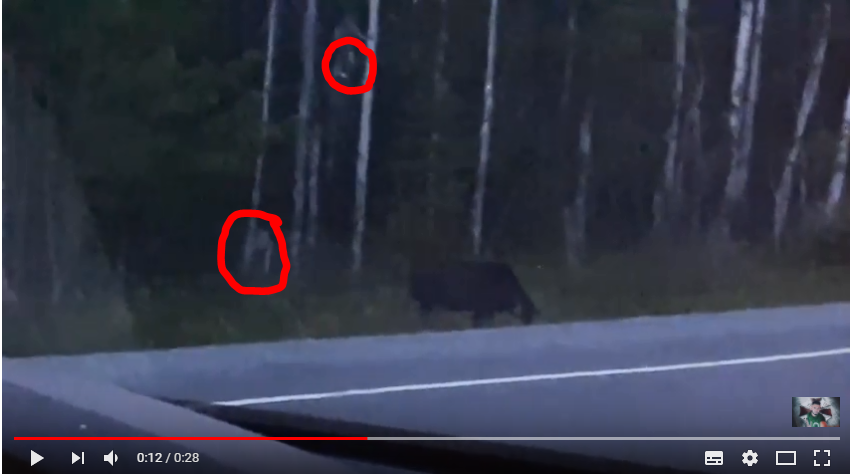 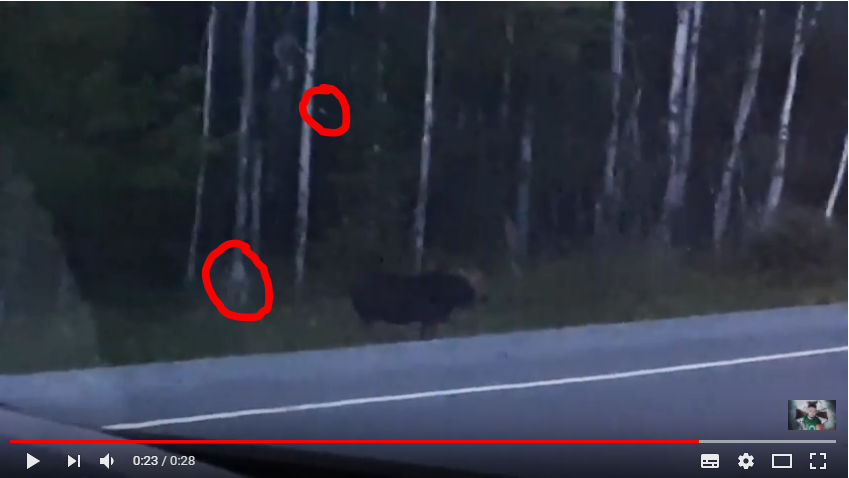 You can also see that the movement is simply caused by the camera movement, by comparing the motion of the "monster" to that of a fixed spot of dirt that is visible on the car dashboard: 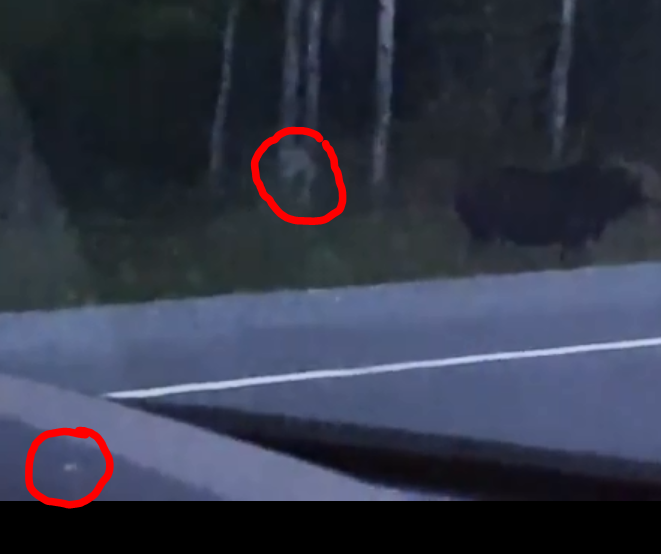 Perhaps someone who has video editing capabilities could create a stabilised version of the video to show that these marks remain stationary relative to one another?

The fact it bobs up and down with the camera shake, to me, makes it very obvious its a smudge on the windscreen. You can even see the trees through the smudge. That and this creature doesn't seem to move it's static and rigid gliding through the trees.

It's not as evident in the screenshots.

At least most of the comments on the video also point out it's a mark on the window.

a bit off topic but since The Sun screengrab used a debunked old photo.. i'll add for those interested that the insert photo, according to the gamers, is a "grim" from the Resistance video game.

Why isn't it possibly a reflection of a person inside the car onto the windshield? Looks like their hands moving.
G

Sharon Hill said:
Why isn't it possibly a reflection of a person inside the car onto the windshield? Looks like their hands moving.
Click to expand...

Sharon - I think it very well could be the reflection of someone's hand moving, or something else moving inside the car. I don't think it's due to the movement of the camera, nor is it due to a smudge on the windshield. The object's motion just doesn't seem to be tied to the camera motion. Might even be an internal refelection of the camera lenses. Of course, it could be a real "monster". The moose doesn't seem to be aware of anything nearby and stalking it, and I suspect it would know and react in some manner.

That said ... how safe is it to stop on the roadside and take video of a moose? Seems like there's a danger of it charging the car.

Sharon Hill said:
Why isn't it possibly a reflection of a person inside the car onto the windshield? Looks like their hands moving.
Click to expand...

That's what I was thinking, a kid hanging over the front seat to see the moose maybe. and the white dot moving 'with' her maybe the dome light.


I was in the car with the girl who took the video, my boyfriend was driving. We never saw anything mooving in the wood and the car was park on the side of the road to let my daughter look at the moose. I was very surprised when i saw her video

I've stabilised the video, once with lower settings, which allows for inclusion of the opaque part of the car interior, then with high settings that results in the interior being cropped out.


Here's the things I've noticed.
My best guess at what this is, would be bird droppings on the car, which are both commonplace (I've seen many of these and never a gollum) and would explain the blob, with streaks below appearance of the mystery creature.
Last edited: Aug 4, 2018

purpleivan said:
My best guess at what this is, would be bird droppings on the car,
Click to expand...

Nice work on the video but I’m not sure I agree with this part. The movement doesn’t match the car dashboard as closely as I would expect if it was a fixed mark on the window, which is what I first thought it was. A reflection makes more sense, as that allows for more relative motion between the fixed dashboard and the blob.
F

The fact that the 'dot' about 15cm above to the right (approx 1pm position relative to 'creature' as circled in post #1) moves with it and never comes closer or goes further away from it, to me shows they're both something (smudges?) on the windscreen and not a reflection of something/someone in the car.

Trailblazer said:
Nice work on the video but I’m not sure I agree with this part. The movement doesn’t match the car dashboard as closely as I would expect if it was a fixed mark on the window, which is what I first thought it was. A reflection makes more sense, as that allows for more relative motion between the fixed dashboard and the blob.
Click to expand...

I started to type a reply that there is more relative movement between the "gollum" and visible parts of the vehicle at the bottom of the frame than I'd like, in order to say that this is something physcally stuck to the window. However I took another look at the video and reverted to my original position, i.e. that it's something stuck to the glass.

What did this for me was that I noticed the strong movement of the grey part of the vehicle at bottom of the video, relative to the black part. This would most likely be due to the two being at different distances from the camera. I think that it's this movement people are refering to, as being "too much" relative to the "gollum".

The reason that this is important, is that the grey part appears to be quite a bit closer to the camera than the window that the black part, which appears to be the frubber strip frame and so at the same distance as the window. Therefore tracking the "gollum" against the white part would be expected to result in relative movement.

To illustrate what I mean, I put together the GIF below , in which I grabbed some frames of the video, then moved them to place the "gollum" in each frame on top of one another. This was done by eye, with a smudgy, compressed blob of a "creature" so isn't perfect, but I think that the alignment of the frames is reasonable.

I added some fixed position markings to the 2nd half of the GIF (a repeat of the frames of the 1st half) to aid judgement of the movement of the contents.

With the motion of the video locked onto the "gollum", the grey part of the vehicle interior is clearly moving a quite lot relative to it.

As with almost all of these types of video, it's a shame that it's of appalling quality... "all the better to hide the truth of it".

FatEarther said:
to me shows they're both something (smudges?) on the windscreen and not a reflection of something/someone in the car.
Click to expand...

why can't they both be static things in the car that are being reflected on the windscreen? (like a person and a dome light), wouldn't they too move together?

deirdre said:
why can't they both be static things in the car that are being reflected on the windscreen? (like a person and a dome light), wouldn't they too move together?
Click to expand...

Something pysically stuck to the window, or a reflection would look pretty much the same, within the limits of the movement of the camera and the quality level of the video. My point was that it was suggested that the "gollum's" movement ruled out an attachment to the window, but I think the GIF shows movement that's consistent with that. That doesn't rule out a reflection however, as long as what's reflected doesn't move a lot.

Given the low quality of the video, it's probably not possible to determine which it is, but one thing that's clear... it ain't no Tolkienian fictional creature
F

deirdre said:
why can't they both be static things in the car that are being reflected on the windscreen? (like a person and a dome light), wouldn't they too move together?
Click to expand...

If I was to agree with you that it's a reflection, it wouldn't be 2 separate objects being reflected, because they both move in sync and don't get further apart or closer together with each movement. Two separate objets, especially if one is human, would not reflect in sync. Lets take your example of a person and dome light. If the person is moving around, they'd get closer then farther then closer then farther from the dome lite. The 'golum' and Dot above it does not show that movement.

Two separate smudges on the window and the camera shaking (as the person holding it seems to be freaking out), would make this 'in sync' movement.

FatEarther said:
If the person is moving around,
Click to expand...

I don't think they are moving around. It could be smudges, but what looks like the dirt area from windshield wipers on the left, doesn't seem to move properly with smudges. I'm not committed to 'reflections', because even at .25 slo-mo speed, everything is moving too fast for me to really process frame by frame.
You must log in or register to reply here.