jplaza said:
My take... The plane is still banked left, but it's not turning anymore. That is to say, the turn was coordinated until the target was more or less front of the plane.
Click to expand...

Being banked but not turning puts the aircraft into a sideslip.
I see no reason for the pilot to not level the wings in that situation.
I

I notice that not all information we have on this case is used.

In the analysis so far, is there anything in the Gimbal video that falsifies the report given by Ryan Graves given in a previous post, i.e., the object was within 10 nautical miles, it approached the other objects on the SA, and then came to a stop while the other objects made a 180 degrees turn.

If not, I see no added value in inventing alternative scenarios that contradict his report.

There's a difference between falsifying claims of others, like the claim of sudden moves or high speeds in the other two Navy videos, and inventing alternatives to claims made by a Navy pilot that are supported by his video evidence. Who do you think has the highest credibility in the latter case? He does not claim it was ET, he only makes claims about distance and movements that can or cannot be verified with the ATFLIR video.

Itsme said:
In the analysis so far, is there anything in the Gimbal video that falsifies the report given by Ryan Graves given in a previous post, i.e., the object was within 10 nautical miles, it approached the other objects on the SA, and then came to a stop while the other objects made a 180 degrees turn.
Click to expand...

Note that "came to a stop" is with respect to the ground; since there was a 120 knot head wind, air speed would still be 120 knots, and pulling a fighter into a steep ascent might easily do that (though I doubt 120 knots gives it the best rate of climb).

If we trust this information, we can rule out spacecraft and most commercial jet flights.

I think the 10 Nm range is consistent with the data we have. I don't know if that's the solution, but it cannot be discarded because it is one of the possible solutions. And if anything, the pilot testimony gives it more weight.

I have added a measure of the object's size at PT1 (0'01 mark) and PT4 (0'31 mark), based on the distance and FOV, using the fact that the object represent 1/23rd of the width of the screen at the beginning of the video (post #159 by @Edward Current) and is 20% bigger at the end (his post #190). This gives additional constraint to the possible trajectories, as the estimated size of the object must remains roughly similar between PT1 and PT4 (this is of course under the assumption it's not changing shape).

At PT4, it would be around this location :

About 10% closer from the F-18, explaining its apparent size in the ATFLIR is ~10% bigger. Measured from this point, it's corresponding size is similar, 6.2 m, so this is consistent, the object does not change size. If it's going against the wind, the West would be on the top on these plots (and at the beginning, the F-18 would also fly against the wind in fact). Gimbal is not stationary, but it moves by ~1.2Nm in 30 sec, i.e. ~150 Knots in average (270 because it's going against a 120 Knots wind?), with a stop at the end. And of course an "impossible maneuver" since it stops but keep its altitude.

The background clouds would have to be behind the intersection of the lines of sight (to go from right to left), so at least at 35-40Nm from the F-18. The cloud cover presents around the time of the event could help to know how far the clouds were, because in order to be visible in the ATFLIR that is looking -2° along the vertical, they must have a certain height. But this is much more uncertain and I don't want to speculate too much here. 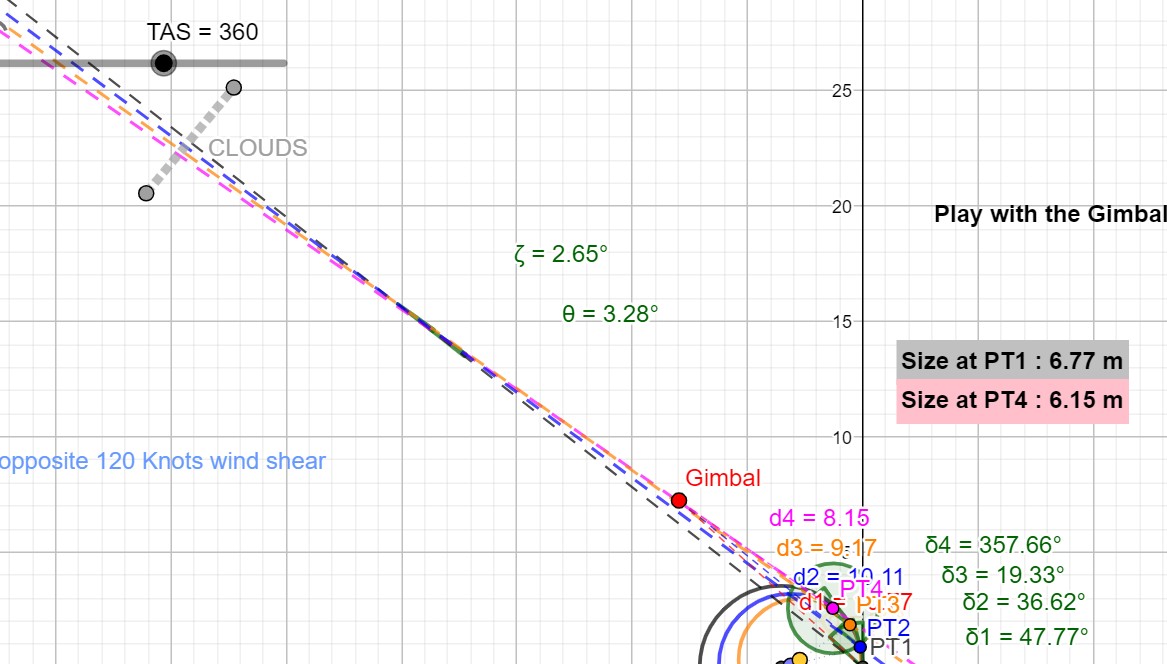 Again, this is one option among others, but one that would match Ryan Graves' report.
Last edited: Nov 25, 2021

This object [gimbal] was proceeding behind the larger group and essentially it approached and then it stopped for a bit and then as the formation turned back 180 degrees it just stopped from that position and then immediately went in the other direction more or less.

Note that the object isn't claimed to be stopped during the video.

If it's moving, the sightlines cross on the near side.

I've mutilated dimebag's drawing by adding a Gimbal trajectory (red line) along the last sight line (because it appeared stationary at the end) and indicated some other sight lines, if the UAP was flying straight. 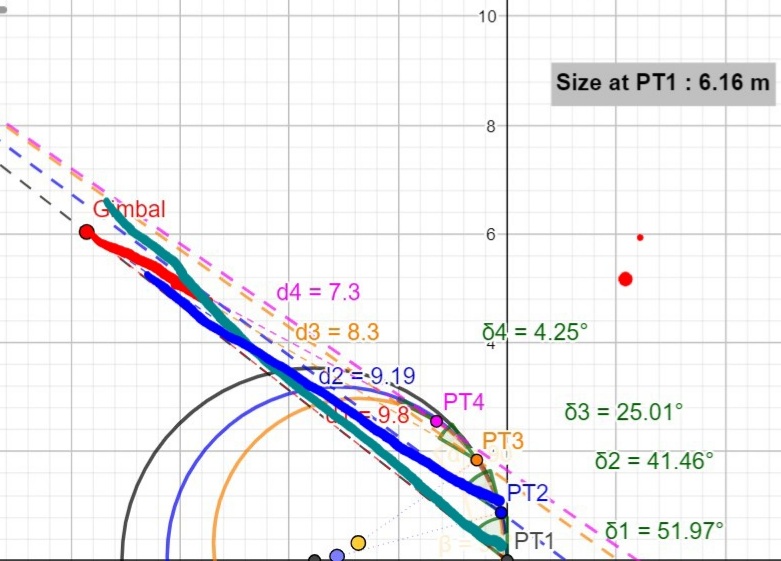 Doing some numbers:
Given that we have the elevation angle (looking down 2 degrees), if we had the altitude or distance to the target it could be possible to calculate the other (distance or altitude). We don't have any of them, but since they are related, it is possible to at least see how one depends on the other. 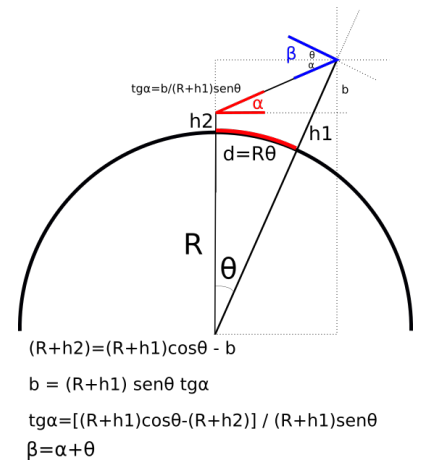 where beta is the down-looking elevation angle, h1 is the F-18 altitude, h2 is the altitude of the target, d is the ground distance over an spherical earth between both, and R is the radius of the earth. I want to see how 'h2' depends on 'd'. And it looks like this: 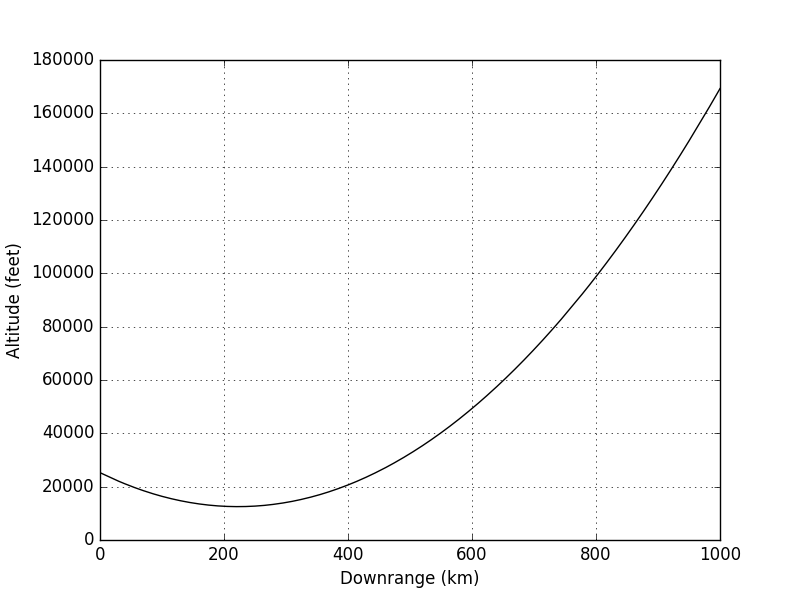 where I deliberately made the calculation as far as 1000 km for those looking into the Atlas hypothesis.

Edit to include a shorter range version of the plot: 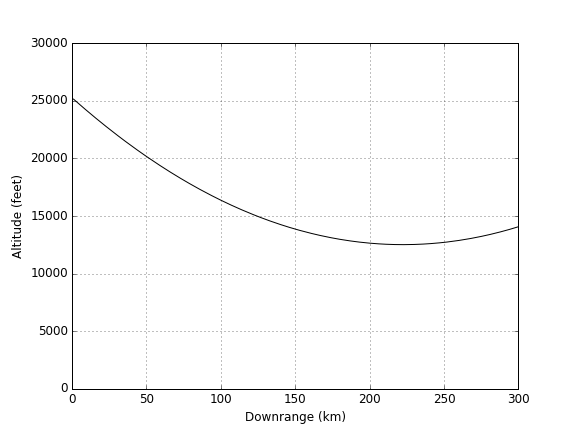 3. If the altitude of the top of the clouds can be determined (check this thread), that may increase the minimum altitude the object can have, and hence the downrange could be also limited to a maximum.
Last edited: Nov 26, 2021
You must log in or register to reply here.