It's all over the news, no need to rehash it. She's in jail in New Hampshire pending transfer to New York for formal arraignment. The charges are here.
https://www.justice.gov/usao-sdny/p...ral-court-conspiring-jeffrey-epstein-sexually

EXCLUSIVE: 'She knows too much': Epstein's victims' lawyer says Ghislaine Maxwell may kill herself or 'be silenced' to stop her spilling secrets on her high profile friends - as she spends her first nights in New Hampshire county jail

As Jeffrey Epstein’s ‘pimp’ Ghislaine Maxwell spends her first days behind bars, a lawyer for their alleged victims who predicted the pervert financier would die in jail says she will likely suffer the same fate. Spencer Kuvin told DailyMail.com in an exclusive interview that Maxwell ‘knows too much’ and that powerful people may want to silence her even as she is locked up. ‘It may be that she can’t handle the fear of what’s going to happen to her and takes matters into her own hands or there will be people who are very afraid of what she has to say,’ Kuvin predicted.
...
Kuvin made his prediction after British socialite Maxwell was arrested at Tuckedaway, a mountaintop mansion in rural Bradford, New Hampshire, that she had anonymously bought for $1.07 million in December.
...
Maxwell has not yet entered a plea but in depositions has strongly protested her innocence.
Florida-based Kuvin represents several women who claim Epstein sexually assaulted and raped them when they were teens. He told DailyMail.com: "I don’t think she is going to get out of jail alive. I said the same thing about Jeffrey Epstein and people laughed at me. I think she knows way too much information — I just have this gut feeling."
Epstein, 66, was found hanged in his prison cell last August while awaiting trial on sex trafficking charges, sparking a raft of conspiracy theories.
Among the powerful people who knew him and had visited him at his hoes in New York, New Mexico, Florida, London and the US Virgin Islands, were Presidents Bill Clinton and Donald Trump. Britain’s Prince Andrew, former Israeli Prime Minister Ehud Barak and celebrity lawyer Alan Dershowitz.
A pathologist hired by Epstein’s brother Mark said that the fracture on his neck suggested he was killed, though the official autopsy said it was suicide.
The apparent incompetence of the prison where he was being held played a part in his death. Guards at the Metropolitan Correctional Center in Manhattan allegedly did not check on him and the cameras outside of his cell were not working on the night he died.
Maxwell could very well be heading to the same prison meaning there will be intense scrutiny of her safety.
Kuvin said that he was surprised by the way the Southern District of New York had handled the case because it was 'the opposite of the way you'd prosecute a mob case'. Rather than go for underlings and get them to flip, prosecutors have gone straight to the top; first Epstein and now Maxwell.
But Kuvin said that 'maybe there are people who are higher up we don't know about'. Kuvin said: ‘By charging Ghislaine with as many counts as they did, the US Attorney’s office was probably looking for her to speak and will pressure her into giving more evidence.'
...
After Epstein’s death, Attorney General William Barr said he was ‘appalled’ and ordered an FBI investigation.
At the time Geoffrey Berman, then the US Attorney for the Southern District of New York, vowed to continue the investigation into Epstein’s co-conspirators, with Maxwell as the number one target. Berman was fired by Trump last month and the case is now under acting US Attorney Audrey Strauss.
...
Among those who have claimed that Epstein did not kill himself is his former lawyer David Schoen. He previously told DailyMail.com that Epstein was preparing a multi-layered legal and media strategy to fight his case. During a five-hour meeting with Epstein nine days before his death Schoen said Epstein was 'upbeat and excited' and looking forward to clearing his name. But Epstein was in a 'dangerous situation' in jail and suggested other prisoners were considering blackmailing him. They would see him on TV inside the prison and tell Epstein: '$70m mansion, huh?' Schoen said.

I'm surprised the feds didn't perp-walk her yet.

Of course if she does die in custody, then we almost certainly have a conspiracy on our hands

Ah! The Daily Mail. Must be true then! Of course her father, Robert, met a particularly tragic end when he was 'lost' overboard on his yacht 'the Lady Ghislaine ' in 1991 shortly after defaulting on 50 million in loans.

It seems people are sharing a faked image of a BBC article claiming to be from "11 July 2020" (5 days from now) saying that Ghislaine Maxwell was moved to the ICU "after Coronavirus symptoms worsen." And the fact that it isn't anywhere on BBC.co.uk/news is a proof that the BBC took it down and they're covering up their mistake.


Some red flags:
- Only one photo is floating around showing this
- URL bar is cropped out
- The is in the "UK -> England" section, while all of the other stories about her are labeled US & Canada. Considering the claim is that she's in a US jail and charged by the US government, presumably the same US beat reporter would be writing this story and it would be filed in the same place as other ones. Going through a few pages of search, there are a few old Epstein stories labeled UK, but all of the recent Maxwell-focused stories are in the "US" section https://www.bbc.co.uk/search?q=ghislaine+maxwell
- The "Topic" meta tag is "Coronavirus Pandemic" not "Jeffrey Epstein Death" - which the other 2 Maxwell stories from July 2nd and 3rd are tagged as.
- This is conjecture but, the idea that BBC would have a content management system that doesn't timestamp the posts based on when it actually published or edited is unbelievable to me. Even if they are claiming that it was "scheduled" to be published at a future date, there is no reason to believe a "scheduled time" would overwrite the "published time". I would need to see better proof of other stories having the "scheduled time" show up before I could accept that as data.
- This is incredibly easy to fake. Attached is my version.


EDIT: Here's the real story - someone just edited the headline, picture, date, and name from the Boris Johnson ICU story from April 6th.

Prime Minister Boris Johnson has been moved to intensive care in hospital after his coronavirus symptoms "worsened", Downing Street has said.


Someone probably just made this as a joke, and it drifted into the hands of people who don't have the context of it being a joke. 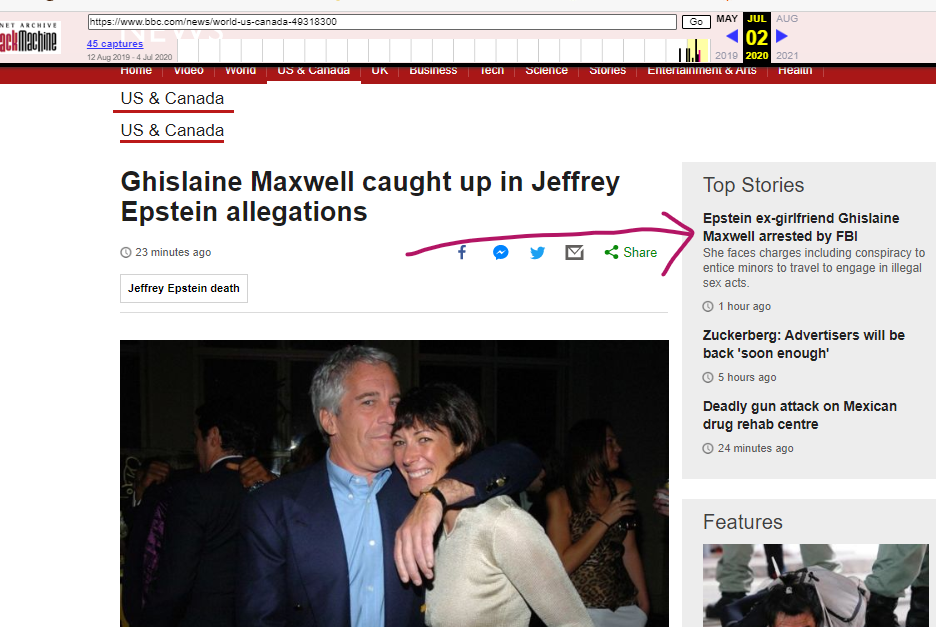 wayback didnt save that exact time. but the first Top story is "School return plans to keep students apart"


note: i also never get the Cymru link ..fake must have been made by someone in England.
Last edited: Jul 7, 2020

Cymru link! That's for Welsh speakers!! Or am I missing the joke

Gary McH-P said:
Cymru link! That's for Welsh speakers!! Or am I missing the joke
Click to expand...

There's no joke, only readers geolocated to Britain get the Welsh language version presented which means whomever took the screenshot was located in the UK likely.

Documents related to Maxwell have now been unsealed:

NEW YORK (Reuters) - Dozens of new documents related to Ghislaine Maxwell’s dealings with Jeffrey Epstein were publicly released on Thursday, as the British socialite defends herself against criminal charges she aided the late financier’s sexual abuse of girls.

U.S. District Judge Loretta Preska in Manhattan had on July 23 ordered the release of large portions of more than 80 documents from a 2015 civil defamation lawsuit against Maxwell by Virginia Giuffre, who accused Epstein of having kept her as a “sex slave” with Maxwell’s assistance.

On Thursday, Maxwell filed an emergency motion with the federal appeals court in Manhattan to block the release of two additional documents, including an April 2016 deposition related to her sex life and a deposition by an unnamed Epstein accuser.

What is the consensus on the Esptein conspiracy? If I am bringing the thread of track apologies.

peweet said:
What is the consensus on the Esptein conspiracy?
Click to expand...

I don't think there is a consensus.
P

Considering the evidence what is the most likely scenario? What do you think given how you debunked other issues?

It’s well known the hyoid bone broke or that the cctv cameras failed.
But is it likely to believe that someone killed him. What about the other cameras or why no defence wounds? It should be relatively simple to detect if he was really murdered.

The more likely scenario is the more boring one. Some prison guards slept on the job and then a man couldn’t handle how his life has been disgraced.
You must log in or register to reply here.