Banned
Spilling over from

If for arguments sake, we accept that CO2 content of the atmosphere needs to come down, or at least not climb appreciably further, that will defacto amount to Geoengineering. In fact, it must be accepted that as a player in the field we have already impacted the atmosphere/climate simply by our presence and activities, that in essence makes us guilty of geoengineering anyway, even if it was unintentional.

So how do we actually go about stabilising the CO2 or if we choose, even reversing it?

Bearing in mind that 'we', the developed world are the main culprits in this, what sacrifices and changes are needed. What exactly are the economic ramifications?
Last edited by a moderator: Nov 20, 2013

You're using the term "geoengineering" rather loosely here. As it is usually used, it doesn't just refer to anything that humans do which might influence the climate. I often use the definition found on Wikipedia: "the deliberate and large-scale intervention in the Earth’s climatic system with the aim of reducing global warming." The main strategies proposed have involved either solar radiation management, or removal of carbon dioxide from the atmosphere.

Thus, "geoengineering" is discussed as something that is distinct from emissions reduction strategies. Most scientists who study geo-engineering say that it should be considered as a last resort, if we are unable to sufficiently reduce anthropogenic carbon emissions.

Belfrey said:
You're using the term "geoengineering" rather loosely here. As it is usually used, it doesn't just refer to anything that humans do which might influence the climate. I often use the definition found on Wikipedia: "the deliberate and large-scale intervention in the Earth’s climatic system with the aim of reducing global warming." The main strategies proposed have involved either solar radiation management, or removal of carbon dioxide from the atmosphere.

Thus, "geoengineering" is discussed as something that is distinct from emissions reduction strategies. Most scientists who study geo-engineering say that it should be considered as a last resort, if we are unable to sufficiently reduce anthropogenic carbon emissions.
Click to expand...

That is if you want to convert skeptics who just see a ponzi scheme based on nothing.

Belfrey said:
Thus, "geoengineering" is discussed as something that is distinct from emissions reduction strategies. Most scientists who study geo-engineering say that it should be considered as a last resort, if we are unable to sufficiently reduce anthropogenic carbon emissions.
Click to expand...

Pretty sure that Boston in the other thread is already saying that people should consider the last resort, whatever it is. Point of no return, etc. I could be wrong, maybe he's just saying that we should keep on raising awareness of our imminent demise indefinitely... without ever proposing any possible solutions. The solution? Awareness of our imminent demise. Well, that's just great.

In any event, it seems to me that it's likely to be a truism that we'll be unable to "sufficiently reduce anthropogenic carbon emissions" eventually if current trajectories continue. Because people like to have sex and like to have other nice things too, etc. And their economies are basically expressions of fossil fuels, even with alternatives in the mix there are still petroleum products in a car itself and thus the need for big oil tankers and so forth.

I proposed some possible scenarios and solutions as far as reducing emissions anyway but people in "bunker" mode didn't seem to want to talk about anything but scientific proof of the problem with emissions itself. Shrug.


I'm not sure that going into bunker mode vs. the "deniers" is actually all that scientific. But if it is and that's just the science or what not, it doesn't seem that effective as far as convincing people goes. After all, apparently I'm not allowed to agree or change my mind even if I want to agree with something. And that's not very convincing, is it?

One last chance to save mankind
There is one way we could save ourselves and that is through the massive burial of charcoal. It would mean farmers turning all their agricultural waste - which contains carbon that the plants have spent the summer sequestering - into non-biodegradable charcoal, and burying it in the soil. Then you can start shifting really hefty quantities of carbon out of the system and pull the CO2 down quite fast. (This would make a difference.) The biosphere pumps out 550 gigatonnes of carbon yearly; we put in only 30 gigatonnes. Ninety-nine per cent of the carbon that is fixed by plants is released back into the atmosphere within a year or so. What we can do is get farmers to burn their crop waste at very low oxygen levels to turn it into charcoal, which the farmer then ploughs into the field. A little CO2 is released but the bulk of it gets converted to carbon. You get a few per cent of biofuel as a by-product of the combustion process, which the farmer can sell. This scheme would need no subsidy: the farmer would make a profit. This is the one thing we can do that will make a difference, but I bet they won’t do it. 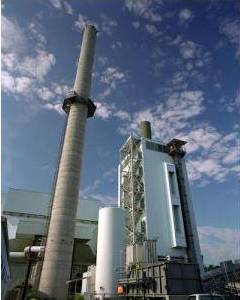 Those who want us to carry on using fossil fuels have proposed power plants that don't pump carbon dioxide into the air. Instead, they'd have modified smokestacks (chimneys) with built-in "scrubbers," which would trap the waste carbon dioxide gas and turn it into a highly compressed liquid that could be stored safely out of the way. You'll hear this idea referred to as carbon capture and storage (CCS) or sequestration. It sounds good in theory, but it doesn't solve our immediate problem: even if we drastically reduce Earth's carbon dioxide emissions, there's so much CO2 in the atmosphere already that global temperatures are likely to carry on rising for centuries, while sea-level rises could continue for millennia (see this graph from the IPCC—the scientific body that coordinates publication of world climate change research).

Photo: Electrostatic smoke precipitators like this are widely used to scrub waste gases from power plants. The next step is extending them to capture carbon dioxide. Photo by Warren Gretz courtesy of US DOE National Renewable Energy Laboratory (NREL).

So what we'd actually need to do is not merely stop further emissions but remove some of the carbon dioxide that's already there. Massive reforestation of Earth would be one option, but it would take time. One scientist, Klaus Lackner of Columbia University, has proposed creating artificial trees that would each capture a ton of carbon dioxide per day in an absorbent resin. The CO2 would then be removed with steam and turned into a liquid, which could either be used industrially or pumped deep underground for indefinite storage.

Now the way I see it is, it wouldn't be a great leap to legislate that 'high pollutant shipping', should be required to install this technology and the resultant CO2 etc is either reclaimed and buried or goes straight into the sea. (not sure of the impact of the latter).


I think this below, was the one that was up and running but facing some financial difficulty in 2011. Apparently the emissions were so clean you could breathe them in directly.


But Bristol Lib Dem councillor Gary Hopkins, the council's cabinet member for the environment, said the city's waste would not go to the waste-to-energy plant as it was "not environmentally acceptable or cost effective

The Lib Dems and Tories combined to bring down the city council's then Labour cabinet earlier this year over the possibility that an incinerator could be built at Avonmouth as part of a regional waste plan.

The technology proposed for the plant on former ICI land would involve the controlled burning of the waste, producing steam to drive a turbine and generate electricity.

Gareth Phillips, planning and property manager at Sita UK, said the plant – which the company calls an energy recovery centre – could supply enough power for half the households in South Gloucestershire.

are faced with increasing pressure to reduce the amount of waste they send to landfill. This development could significantly benefit businesses by providing an efficient alternative."