@Mick West suggested that I post this in a thread - in a recent "Twitter space" discussion user @Karmavor introuduced a video of a flashing light in the night sky that he suggested was a UFO. I subsequently went on to (probably) identfy the flashing object in the video. This thread will hopefully show my methodology so that other may can do the same in future. I've used this method before on Reddit to identify the ISS in a UFO video, and to identfiy a train of Starlink Satellites in a UFO video, but had never used it for a single flashing satellite.

The video
The video was taken in Sedona, Arizona and shows a repeatedly flashing light moving quite slowly. The date and time of the recording is overlaid on the video - . At one point he shines a laser at the exact area of the sky that the light is flashing. Some stars can be seen in the video.


He seems to be pleased that Mick couldnt immediately explain it:


My initial Hypothesis
My first idea was that this was a flashing or tumbling satellite. As a backyard satellite observer of over 30 years flashers or tumblers are commonly seen during any observation session. The flash happens when a particularly reflective part of a rotating satellite shines sunlight directly at your location. This can happen just once, or repeatedly over a number of minutes.

Step 1 Where in the world?:
Karmavor seemed relucted to give his exact location, so I started a DM with him and he gave me the exact lat long of the recording location (I will withold his exact location from this thread) - but he had previosuly stated it was in Sedona. I shared all my analysis in realtime with him, it took about half an hour to do this. I also confirmed with him that the date on the video was 10 Sept 2021 at not 9 Oct 2021 (US vs RoW date formats). 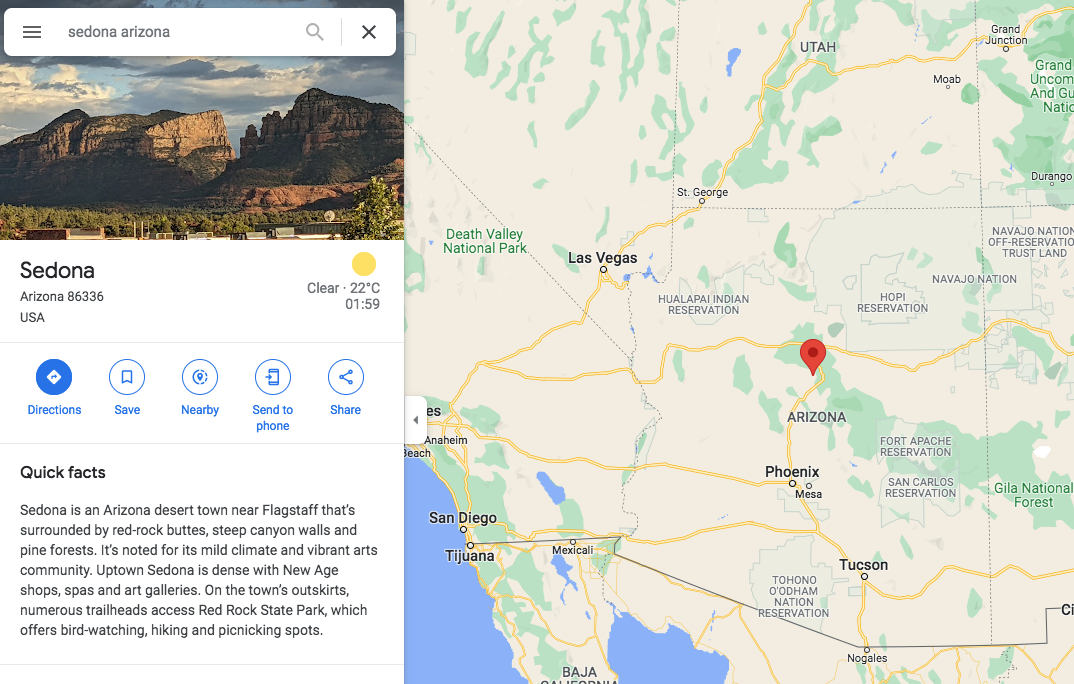 Step 2: Where in the sky...?
The video shows some stars. In some videos you can easily identfy the constellation that is in frame, but I couldnt work out exactly where in the sky we were looking due to the quality of the video. 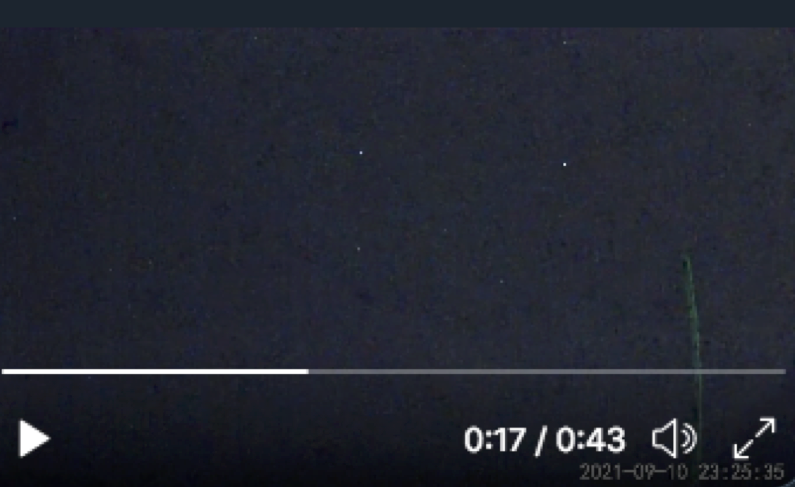 To identify and annotate starsacapes I use the astrometry.net website. Upload a pic of the night sky, click begin, and it will (within about 10 mins) identify the stars and constellation in the sky. It works really well and quickly showed that we were looking towards the constallation of Cygnus (the swan). 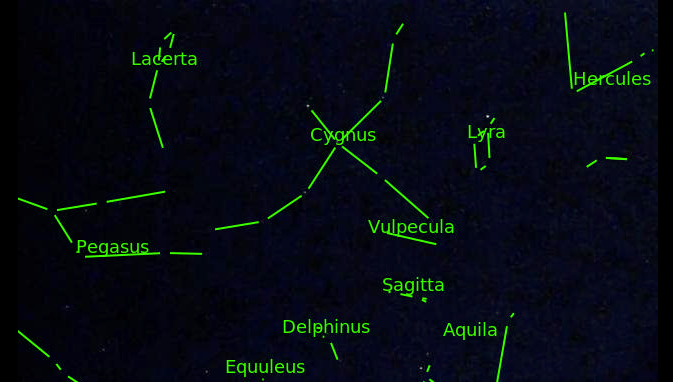 3. Check Satellite historical passes
The best website I have found for checking historical satallite passes is in-the-sky.org. Although heavens-above.com does this too I think in-the-sky.org is more accurate - it uses the orbital elements that were valid at that time of the sighting, wheres heavens-above just uses the current orbital elements (I think?!). The downside of in-the-sky.org is that location specific info isnt in the URL, so linking to a particular satellite pass for a particular location isnt as easy.

After setting the observers location, and going to the 'spacecraft > planetarium of satellites " menu, and then setting the date and time to 10 Sept 2021 at 2326hrs it was possible to see the satellites that would have been visible to Karmavor at the time of recording the video: 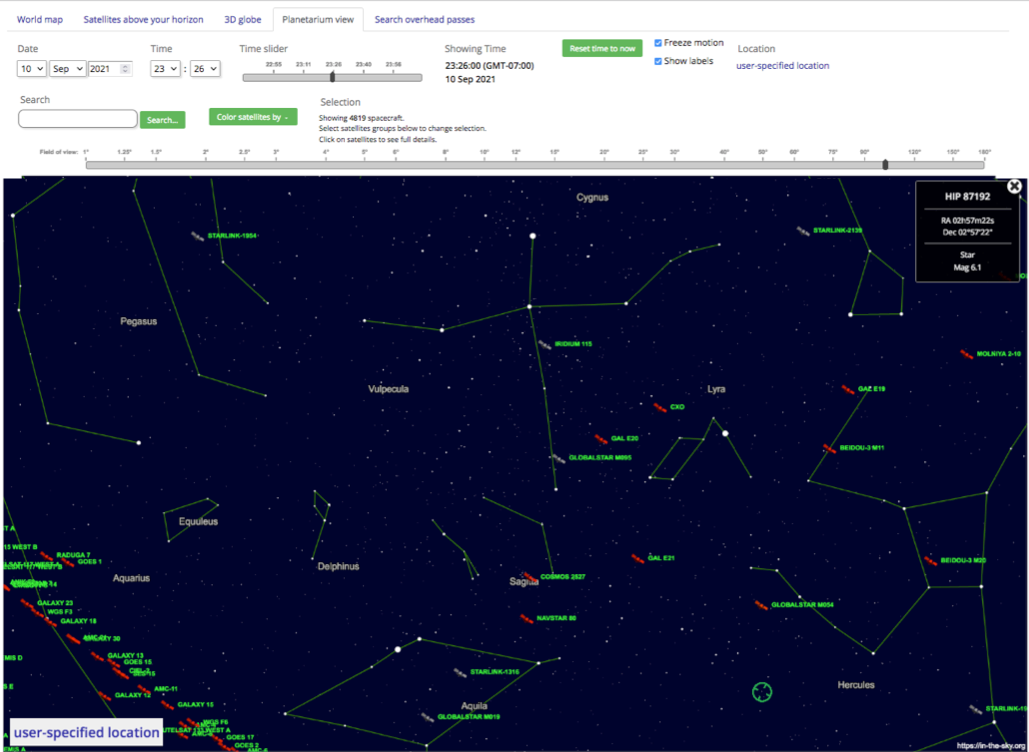 4. Closing on on the Flasher
In PowerPoint I overlaid a screen shot of the video showing the laser pointer with the planetarium view. I adjusted the screen shots so they aligned. 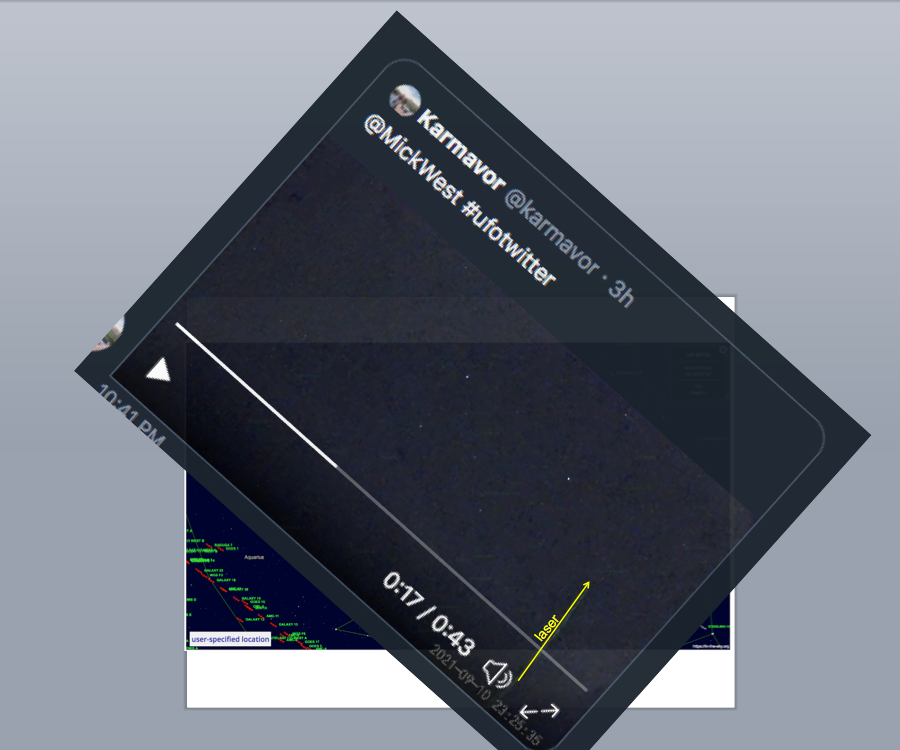 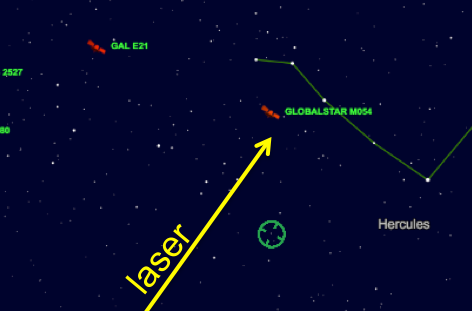 I then simply Googled some inormation about Globalstar M054. Details of the satellite are here - although there's nothing conclusive about it flashing. 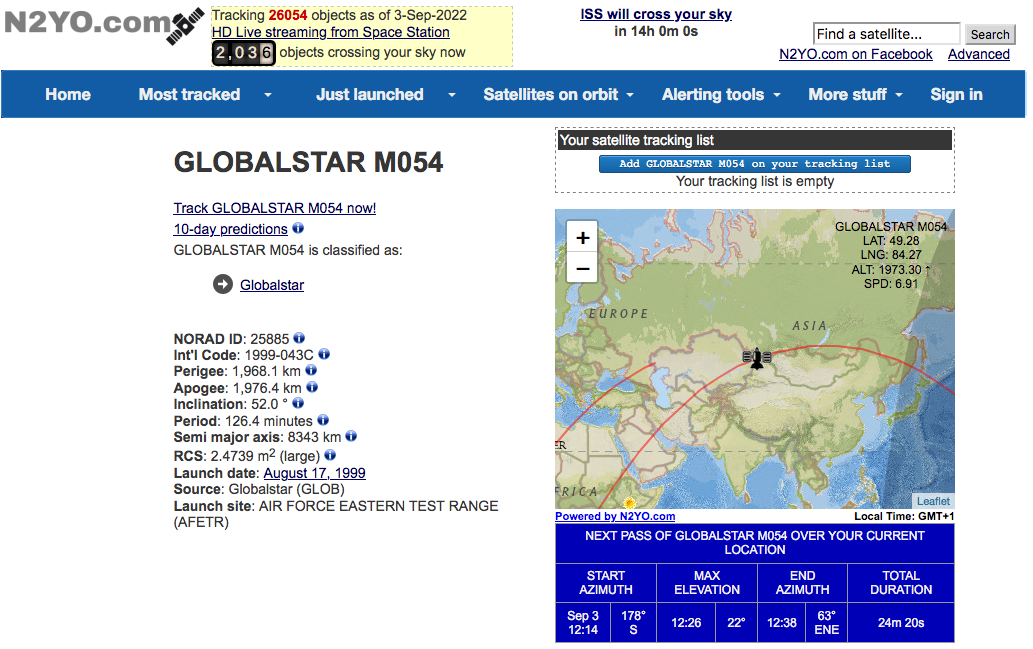 So then I googled "Globalstar M054 flash" and the first return that came up was this:

The link give this 2 minute exposure picture of the sateillte flashing as it moves through the night sky. 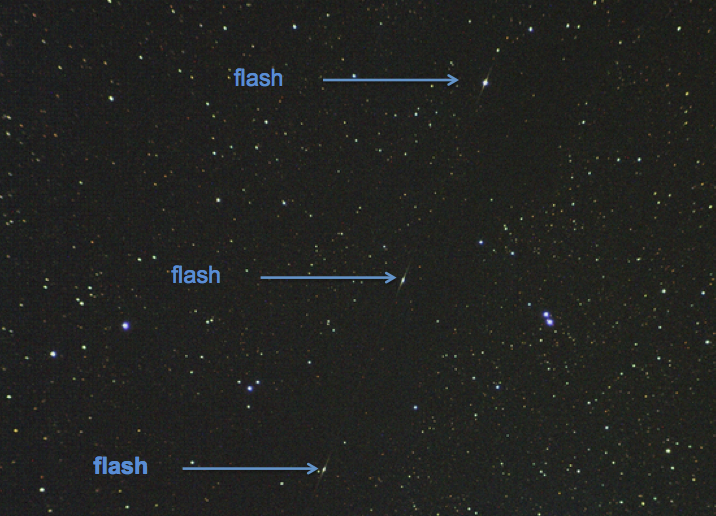 This confirms the possibility of the flasher being Globalstar M054. It would be good if we could work out the rate of flashes from that photo and compare them with the frequency of theflashes in the video - does anyone knwo how to do that?

6. Conclusion:
So in my humble opinion that analysis shows that it is 'probable' or 'likely' that the flashing light that Karmavor saw was in fact Globalstar M054, although I dont think we can 100% conclude that it was. I'd love to hear anyone's constructive criticsm about my method an deduction.

Hopefully this thread will help anyone else who is tryting to identfiy a satellite/ufo from a video or still in future.

That is around 40 seconds per flash it could be the image is cropped though meaning flashes are missing.

but that frequency in the video seems faster, but it is so noisy I cannot really tell. It's also taken in 2018 can the spin rate change much?

That is around 40 seconds per flash but that frequency in the video seems faster, but it is so noisy I cannot really tell. It's also taken in 2018 can the spin rate change much?
Click to expand...

That's only 3 flashes that the object was in frame for.

flarkey said:
That's only 3 flashes that the object was in frame for.
Click to expand...

I guess you could work out the rate of travel through the FOV of the astrobin then that would give you the frequency depicted.

@flarkey
Sorry my messages got messed up, if you could work out the time it takes to traverse the FOV in the astrobin photo then that gives the flash rate.

Staff member
Some random notes as I think about this...

Field of view across the short axis of the picture is about 1.9 degrees: 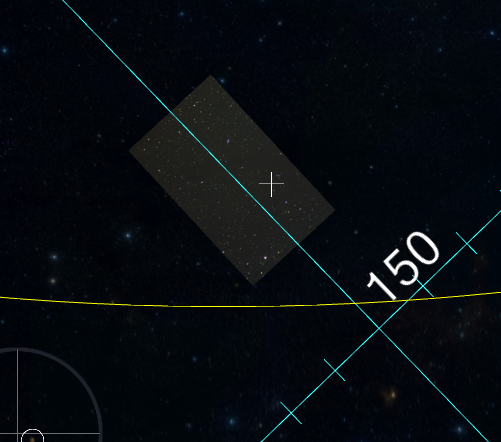 From the video I count about 9 seconds between flashes. So its in the right ball park (i think) but not an exact match.

can anyone refine these calculations further?

flarkey said:
Some random notes as I think about this...

Field of view across the short axis of the picture is about 1.9 degrees:

From the video I count about 9 seconds between flashes. So its in the right ball park (i think) but not an exact match.

can anyone refine these calculations further?
Click to expand...

If there's a track for that sat in Stellarium, you could create a custom ocular/sensor using the oculars plugin that has the fov of the image then time the sat as it goes past that FOV on the date/time. I think that would be fairly accurate.

I am not really sure on how to use the occulars function for this as you have to work backwards from FOV to create the eyepiece/sensor combo. Edit I think the specs needed are all given on the astrobin site, sensor and scope used.. My Stellaris keeps crashing though

It might be a bit more accurate to determine travel time between the 3 actual flash points.

This is the closest I can get in stellarium to replicating the astro photo reference for GS M054, the location of the viewing point has to be very precise to get it to pass through the small FOV of the telescope/sensor used So I got it near using the given town in Italy and then adjusted minutely to get a pass through the FOV. It's hard to tell the angle of the image because of a lack of bright reference stars.

I think I got the specs about right as the dimension degrees matches pretty much astrometry for the photo.

The full pass takes 15 seconds, I may have made some obvious error here though... 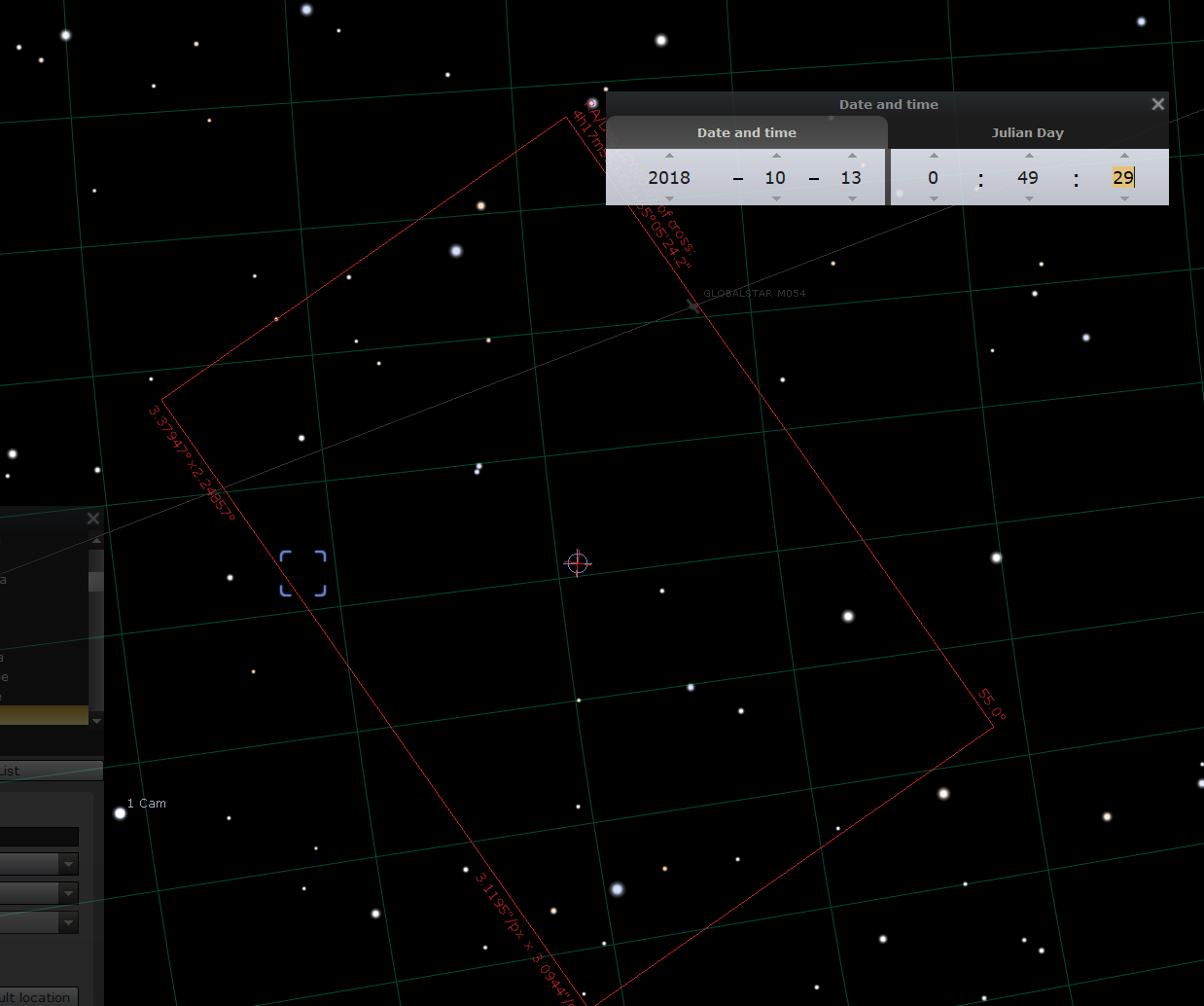 Hmm I may have messed up the lat/long a little
You must log in or register to reply here.

Another Pilot Sees Orbs Circling Over the USA ( MUFON Case 125796)