This one seems a bit odd. Here's a Finnish politican (Ano Turtiainen) warning that vaccines are deadly toxins, and that administering them is tantamount to genocide.

The heart of his speech is this:

'Secondly, dear colleagues, despite the repetition of the media we have so far officially zero COVID deaths in Finland. According to THL (equivalent to CDC) the official causes of death from the year 2020 will not be published until 2022. However according to Fimea (equivalent to VAERS) 78 people have died from COVID vaccines in Finland and there are 1,306 serious adverse reaction reports and 3,630 unprocessed reports. About 57% of processed reports are estimated to have serious adverse reactions. The source for this is Fimea (www.fimea.fi).'

Try as I might, I can't find any backup for this claim of 78 people dying of Covid vaccines.

And here's a fishy website containing the video of the guy making his speech, as well as a translation of the entire speech.

Peter said:
Secondly, dear colleagues, despite the repetition of the media we have so far officially zero COVID deaths in Finland
Click to expand...

According to the Worldometers table, which is based on official statistics from the various countries, Finland has so far had just under 1000 Covid-related deaths. Deaths per million population are relatively low at only 175.

The politician seems to be claiming that for some reason the death reports are not 'official' because official death statistics for 2020 will not be published until 2022. Yet he seems quite happy to say that 78 people have died from Covid vaccines!

Right. Also 1306 serious cases out of 4.6 million vaccinated people is about 0.03%. Not exactly an overwhelming number.

In December 2015 Turtiainen published a Facebook status saying that "people had taken great personal risks when acting in elimination operations to destroy existing and planned asylum centres". In his Facebook status, Turtiainen considered the Finnish Red Cross to be his greatest enemy and wrote if "it was now time to expand operations to the enemy headquarters". The matter escalated into a controversy after Member of Parliament Laura Huhtasaari had liked the status. The Finnish Red Cross reported Turtiainen's message to the police. In September 2018 Turtiainen was sentenced in the district court of Southern Savonia to 60 day-fines for public incitement to crime.[3][4] After being elected as a Member of Parliament, Turtiainen commented that "in this company this sentence is just a feather in my cap".

He doesn't have a scientific or statistical background at all, it's easy to believe he's been bamboozled by some misleading or cherry-picked data. For example, Finland had tight national and even regional movement restrictions, and quarantining rules, that kept their case counts very low compared to most of the world, similarly their healtcare system is pretty good, and their case fatality rate was likewise way better than average, so in combination their mortality rate is very low. Therefore just with that in mind all comparisons against covid deaths will seem unnaturally high. After a fair bit of clicking around FIMEA, I was unable to find the precise numbers he's quoting, or anything representing that stat, and therefore I have to call into question "The source for this is Fimea".

Right.. he seems to be a bit of a fruitcake. A muscled fruitcake, but still.

'On 3 June 2020 Turtiainen mocked George Floyd on his Twitter account with a tweet showing an image of Floyd, a police officer's knee on his neck and his face colorized pink, with the phrase "Pink Floyd".[7] His parliamentary group called the tweet "not acceptable".[7] The tweet was later deleted.[7] As a response to Turtiainen's tweet, the Finns Party expelled him from the parliamentary group.[8] Citing zero tolerance for racism, US-based company Elitefts announced that it is ending its business relationship with Ano Turtiainen's company, Metal Sport & Gear'.
Click to expand...

The True Finns party has also managed to get a representatives into parliament sporting an SS tattoo. Coincidentally, also muscled up too (Tony Halme).

I posted the link to this article on an IRC channel that's mostly populated by Finns this morning, and the responses aren't printable. He's not held in high regard by most Finns (at least urban ones that I know), and his outbursts are considered best ignored.
P

Ano has always said pretty controversial nonesense and conspiracy crap, but I think this is Fimea source he means:

He and many other conspiracy figures here have also said it is suspitious how slow research to these cases are, which is ironic since they whined how making covid vaccine "happened too fast".

Funny. I'm not particularly well read up on Finnish internal politics, haven't head of this particular guy before, but I am familiar with a bit of it (I'm part-Finnish, still have plenty of family there, and I live basically nextdoors anyway). Once I read the thread headline I thought "got to be some guy from PS" and yeah, he is ex-PS, but even they apparently sacked him for being too out there. Funny.

PS = Perussuomalaiset ("True Finns"), right-wing nationalist populist party, whose few legit points of contention are hopelessly shadowed by the amount of morons they attract. Much like SD and their more radical off-shoot AfS in Sweden, FrP in Norway, and so on and so forth. It's just so freaking predictable.

Euromomo has current all-causes mortality for Finland and other European countries. I'm first giving the graph for all of Europe, and then for Finland. (A Z-score is a measurement of how much a value deviates from the long-term average baseline.)

Obviously Finland has done very well in 2020, partially due to being far away from sicker countries like Italy and France: the virus simply had a hard time traveling that far. (Also, maybe Finns don't go out that much?)

We can also see low mortality in the first half of 2021; I expect Finland rolled out vaccines then, like the rest of the world?
The fall wave 2021 is more in step with the rest of Europe.

Conspicuously absent: any "genocide"-level mortality spikes. No reason to worry.

PenaH said:
Ano has always said pretty controversial nonesense and conspiracy crap, but I think this is Fimea source he means:

From the Google translation:

Adverse reaction reports reflect the notifier's observations and views and do not imply that the possible link between the vaccine and the observed adverse reactions has been established. The benefits and drawbacks of the vaccine can only be concluded once all available data have been scientifically evaluated as part of the ongoing safety monitoring of the vaccine. If the safety issue is confirmed by a scientific assessment, steps will be taken to update, for example, product information and vaccination instructions.


This is how VAERS and other similar databases operate everywhere.

What should happen (and I know has happened in Germany) is that the health officials see, for example, a lot of strokes reported. They then investigate: how many strokes happen to normal people compared to people who have been recently vaccinated? And they might conclude that the rates are similar, and the vaccine did not cause a significant increase in strokes; you simply get a lot of strokes because they are common and half the population got vaccinated. And they will analyse the data by age group and other factors and conclude that the stroke risk is a somewhat elevated for women between 30 and 50 years of age that received the Johnson&Johnson vaccine (if I remember that correctly), and a caution will be added to the vaccine information.

This database is no more than an advance warning system: if you see something in there, it still needs to be processed to decide if it's a real danger.

People die normally anyway; the vaccine won't make anyone immortal, so vaccinated people die normally, too. These deaths get reported in the database if a doctor thinks there might be a connection, but that doesn't mean that there actually is: you have to look closer.
P

PenaH said:
Ano has always said pretty controversial nonesense and conspiracy crap, but I think this is Fimea source he means:

He and many other conspiracy figures here have also said it is suspitious how slow research to these cases are, which is ironic since they whined how making covid vaccine "happened too fast".
Click to expand...

I feel I need to add this thing. It might be a stupid queiston, but I can't get sense of it. Finland's population is about 5,5 million people, but according to Fimea they have given 7 685 427 shots. How is that possible? Has there really been that much tourists here too, because I have not seen that and I live in Helsinki, where most tourists come.

PenaH said:
Finland's population is about 5,5 million people, but according to Fimea they have given 7 685 427 shots. How is that possible?
Click to expand...

Most Covid vaccines require 2 shots for full protection. This includes all of these: 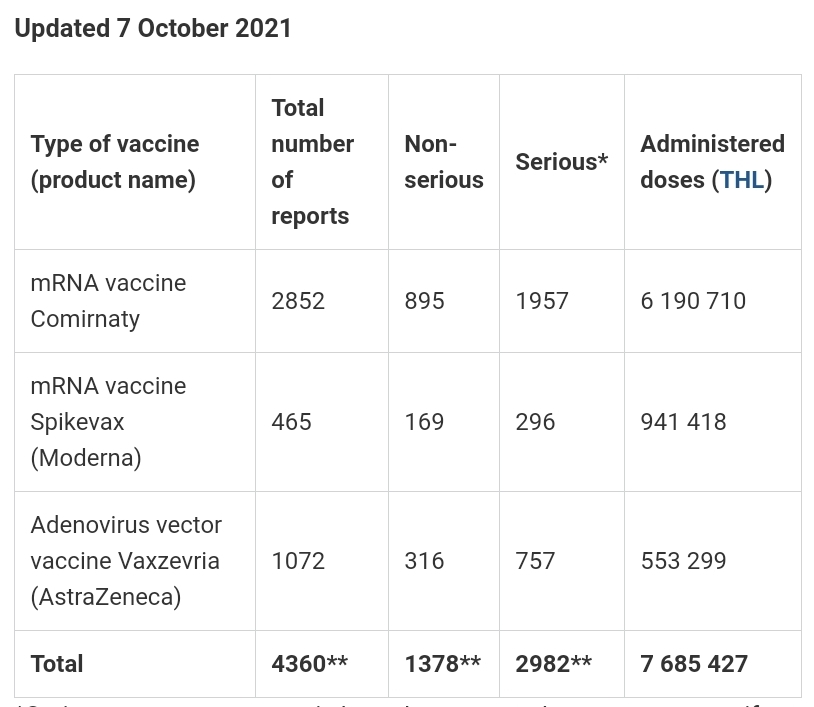 The older people who got vaccinated early are starting to get booster shots now, which is their third shot for most.
Last edited: Oct 18, 2021 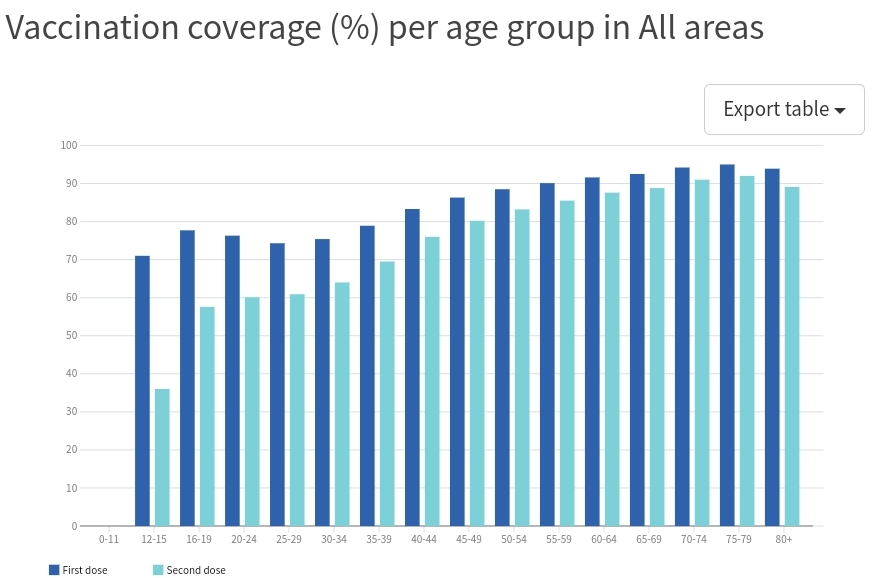