Many sites are sharing the click-bait title and article, "Here's How to Identify GMO Tomatoes in 2 Easy Steps"....
....with many using this graphic photo : 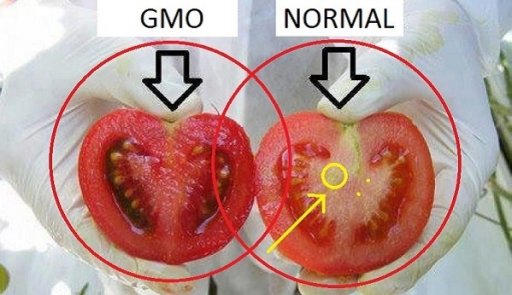 ......in this article we are going to show you an easy way that will help you identify these GMO tomatoes and you will know what to eat.

Background, and why the above claim is false:

A PLU is short for "Price Look-Up" code. It's that sticker on fruits and veggies in US and other world supermarkets.
PLU's are governed and proposed by the IFPS


IFPS is the International Federation for Produce Standards (IFPS) is composed of national produce associations from around the globe.
The long term objective of the federation is to improve the supply chain efficiency of the fresh produce industry through developing, implementing and managing harmonized international standards.
http://www.ifpsglobal.com/About-IFPS

PLU Code Transition - Leading Digit '8' by cdallaccoAs the adoption of price look-up (PLU) codes gain further traction in the produce industry, the IFPS has committed to transitioning the previously unused prefix '8' to accommodate an increase in varieties of fresh produce items as they enter the market. Please refer to the press release (English, Spanish and French) for further information. Additional information can also be found in this article which is an extract from the October 2015 Fresh Magazine issue published by PMA.
http://www.ifpsglobal.com/Identification/PLU-Codes

But based on the prefix "8" 's prior intention, some sites and people believe or claim this prefix means such labeled produce is "GMO sourced".......without noticing that "8" now means something entirely different, due to changes and advancements in PLU labeling.
Since no GMO produce is sold anyway, "8" now means :


As International Federation for Produce Standards
(IFPS), for which I (Ed Treasy) volunteer as Chairman of
the Board, reported this summer, IFPS committed
to transitioning the previously unused “8” prefix
to accommodate an increase in varieties of fresh
produce items as they enter the market. The transition
comes at a time when the demand for the
voluntary codes, used for price identification in retail,
is increasing in North America, Europe, South
America, Australia, New Zealand and more recently,
Mexico.
http://www.ifpsglobal.com/Portals/22/IFPS Documents/Prefix 8/IFPS Prefix 8 Fresh Mag article Sept 2015.pdf?ver=2015-10-07-204449-613

Not forgetting to mention, that there are no GMO tomatoes sold, anywhere, anyhow.

To further expand upon the facts raised by Leifer. There had briefly been available one GMO tomato (Flavr Savr), however at the current time there are none available.


Flavr Savr (also known as CGN-89564-2; pronounced "flavor saver"), a genetically modified tomato, was the first commercially grown genetically engineeredfood to be granted a license for human consumption. It was produced by the Californian company Calgene, and submitted to the U.S. Food and Drug Administration (FDA) in 1992.[1] On May 18, 1994,[2] the FDA completed its evaluation of the Flavr Savr tomato and the use of APH(3')II, concluding that the tomato "is as safe as tomatoes bred by conventional means" and "that the use of aminoglycoside 3'-phosphotransferase II is safe for use as a processing aid in the development of new varieties of tomato, rapeseed oil, and cotton intended for food use." It was first sold in 1994, and was only available for a few years before production ceased in 1997.[3] Calgene made history, but mounting costs prevented the company from becoming profitable


The FDA stated that special labeling for these modified tomatoes was not necessary because they have the essential characteristics of non-modified tomatoes. Specifically, there was no evidence for health risks, and the nutritional content was unchanged.[3]

Unfortunately, anyone can go to youtube, and find older videos, based on non-current information or facts.
Older accusations can be (currently) false, either on their own, or based on newer and more accurate data.
But some people will still believe it's "currently true"......even though that within the subsequent years, new facts have surfaced.
The cleansing of outdated facts or inaccurate opinions on YT, is not a priority nor a designated duty of the YT company, as far as I know. (I should update my YT knowledge facts, lol)

Leifer said:
Many sites are sharing the click-bait title and article, "Here's How to Identify GMO Tomatoes in 2 Easy Steps"....
....with many using this graphic photo :

This is another hallmark of clickbait: a photo annotated and highlighted in a way that has nothing to do with the actual article. Unless they are now sticking the labels inside tomatoes...

I don't know about you fellas, but the supposed GMO tomato looks a lot more juicy and flavorful than the supposed non GMO unit...
silly of them [...] to make the less appetizing tomato the supposed "good" one. No?
You must log in or register to reply here.

Context: "People yield themselves with perfect docility to our molding hand" - Gates