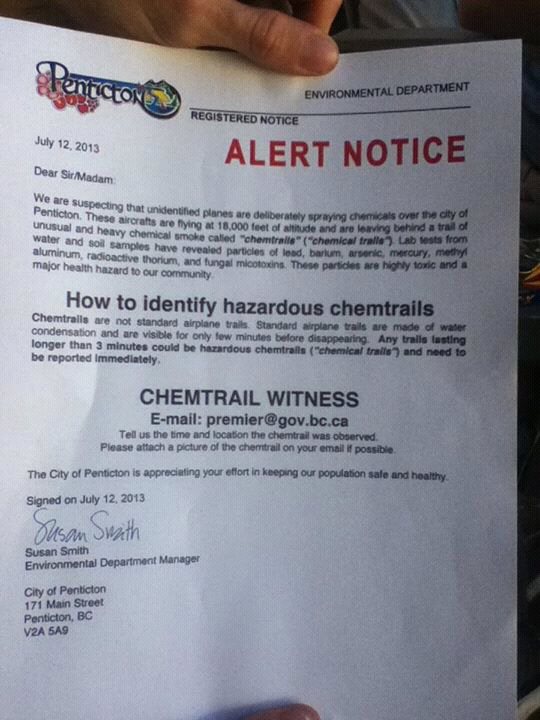 In stark contrast to the front page of the city of Penticton's official site here.

The inaccurate claim that trails which persist are not normal is debunked here -http://contrailscience.com/persisting-and-spreading-contrails/

The claims surrounding soil samples etc usually stem from the What In The World Are They Spraying propaganda piece, and are debunked here -
http://contrailscience.com/what-in-the-world-are-they-spraying/

Google and the site for Penticton's authorities show no trace of an 'Environmental Department', or of the named individual in the letter.

Can't seem to see an Environmental Department listed on their site

Staff member
The email address given is for the office of the Premier of British Columbia (Christy Clark). Looks like a ploy to get people to email in photos of contrails.

Seems rather pointless, as surely the government would be in on any supposed conspiracy?

Oh My God!! They have found funghi in soil!!!! We're all doomed (said in a Scottish accent).

Found something about it:

The Penticton RCMP is investigating a fraudulent letter that began circulating in the city on Monday.
According to Sgt. Rick Dellebuur, alert notices regarding hazardous chemtrails were put on vehicles at Shoppers Drug Mart.
The letter has city letterhead, but was not issued by the city.
"There is no environmental department in the city and Penticton did not issue this," he said.
The letter signed by someone named Susan Smith, environmental department manager, states "we are suspecting that unidentified planes are deliberately spraying chemicals over the city of Penticton."
It further covers how to identify hazardous chemtrails and who to contact if you see them.
Dellebuur said they are following up to see who is behind this.
"We are following up on leads," he said. "It's just one of those things out there in this day and age."

UPDATE: Kelowna City Clerk, Stephen Fleming has confirmed the same letter using City of Kelowna letterhead has also been circulated. Fleming says the Kelowna letter was dated June 28 and also bore the signature of Susan Smith. As opposed to directing people to contact the premier, the Kelowna forgery asked people to direct their outrage to the Ministry of Environment. City of Kelowna officials contacted the ministry advising of the letter.
Click to expand...

The letter also has relevance to some psychological research that suggests that conspiracy believers may be more likely than the general population to participate in conspiracies themselves.

Some of the Global Skywatchers called and no one by that name was at that number. THey still think it's a great idea and some are saying they're going to make fake notices from other agencies.

The civil disobedience starts with pranks and progresses into ever more radical efforts. Eventually there will be naked streakers, then chaining themselves in public places. When nothing changes in response, they end up justifying further radicalization because nothing else has worked.

JRBids said:
Some of the Global Skywatchers called and no one by that name was at that number. THey still think it's a great idea and some are saying they're going to make fake notices from other agencies.


I think it's a great idea too - the more the general public is shown how insane these people are the safer I feel!

JRBids said:
Some of the Global Skywatchers called and no one by that name was at that number. THey still think it's a great idea and some are saying they're going to make fake notices from other agencies.


At that link, I get:
"Sorry, this page isn't available
The link you followed may be broken, or the page may have been removed."
Does this mean I have been Blocked from GSW on fb?

You have been blocked there.

This one is a good one

???????
Ok please don't laugh, but do u think they could be dropping bugs mixed in these chemtrails? We are seeing bugs we never saw before and tons of them..at least two different kinds that seem new around here. We can not go outside at night anymore or we are bombarded! They are all over our lawn furniture and the ground! It's crazy

What is scary to me, is that folks like them have the right to vote and to sit on juries
Click to expand...

From 1874, my state's constitution(Arkansas) forbade idiots, imbeciles and insane persons from those privileges(Article III, SS 5). Several years ago in their infinite wisdom the people decided to repeal that provision. Atheists are still disqualified from holding public office or testifying in the courts. Go figure.....

Ross Marsden said:
At that link, I get:
"Sorry, this page isn't available
The link you followed may be broken, or the page may have been removed."
Does this mean I have been Blocked from GSW on fb?
Click to expand...


Yes it does. Easy one though, sign on with a different name to FB. Or just make a group page with your own name and use that to see. Blocking is "so" effective.

Plum island was run by nazi scientist that made Lyme des ease put it in ticks to infect the Emmy, we brought him here and wala.
Click to expand...


In the internet and jet age, people still find places that around around the corner from them to be exotic and dangerous. I have friends who worked on Plum Island, I had the pleasure of visiting it and had a tour of the whole island including the labs.. It is a beautiful, untouched gem. I hope it is not developed.

You know you have a credibility issue when you have to lie to and deceive people to convince them of your argument.

He made it to the headlines of the local newspaper 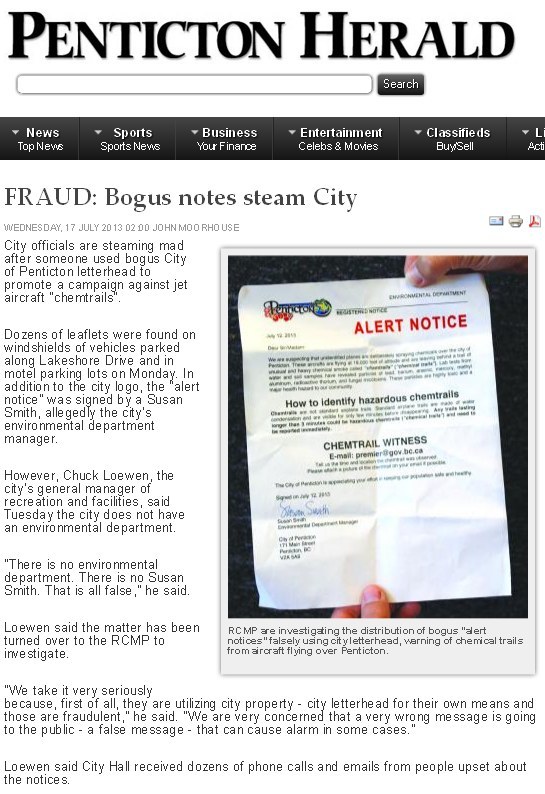 Now everybody in Penticton knows that the Chemmies are frauds
Last edited by a moderator: Nov 20, 2013
You must log in or register to reply here.