Explained: Why Planes Get Dented Nosecones - It's Mostly Birds 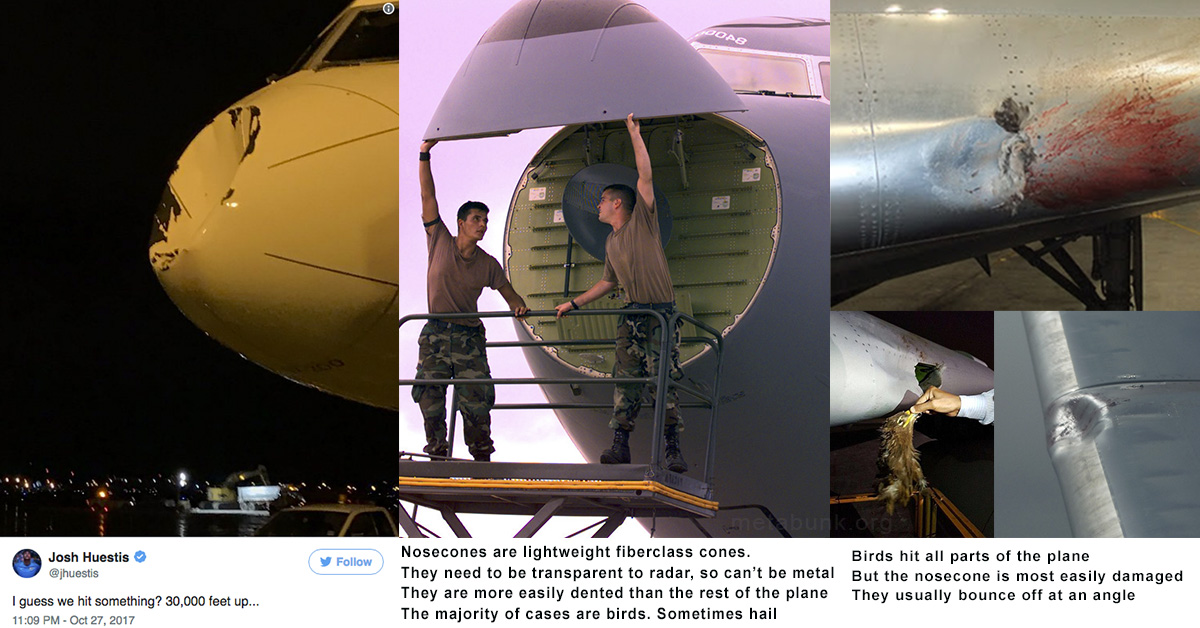 A recent incident of a plane with a dent in its nose raised a lot of interest on Twitter after basketball player Steve Adams and other players posted photos of the dent, saying they were 30,000 feet up. While 30,000 feet is not an unprecedented altitude for a bird, it is very unusual. However more professional reports say the plane was descending, and do not give an altitude.

A Delta Airlines Boeing 757-200, registration N650DL performing charter flight DL-8935 (dep Oct 27th) from Minneapolis,MN to Chicago Midway,IL (USA) carrying the Basketball team of Oklahoma City Thunder, was descending towards Chicago when the nose cone of the aircraft received a large dent. The crew continued the flight for a safe landing on Midway's runway 31C.

Oklahoma City Thunder players suspect something hit the nose of the aircraft.

Content from external source
The flight history was recorded:
https://flightaware.com/live/flight/DAL8935/history/20171028/0340Z/KMSP/KMDW 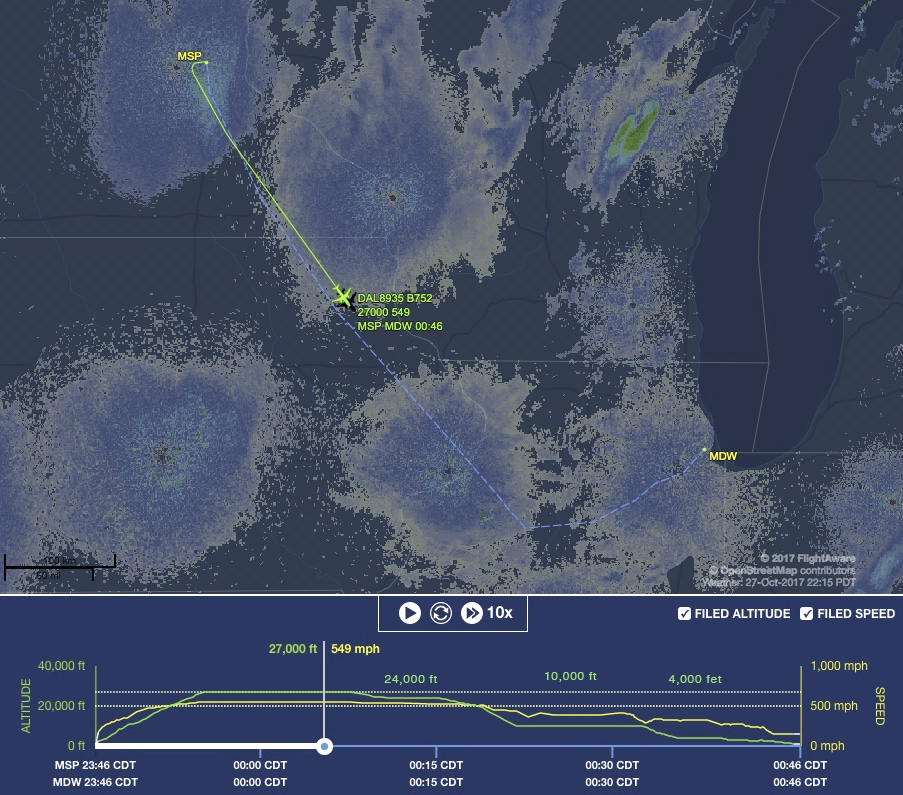 It's not clear where the bird strike occurred, but a good candidate is the sudden deviation from the flight plan and the increase in the rate of descent seen here. That would indicate a possible strike at around 19,000 feet. However it's possible that it was later. It's not clear from the above report. 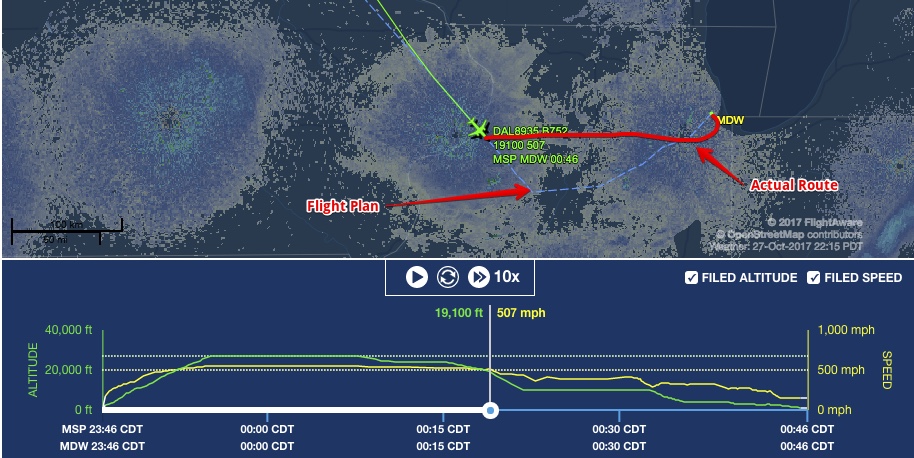 High altitude birdstrikes are rare, but there's a lot of planes flying, so they still happen every so often.
https://www.flightglobal.com/news/a...tigate-high-altitude-bird-strikes-nea-334523/

According to a government-industry bird strike committee, there were 2,200 bird strikes involving civil aircraft at altitudes of more than 5,000ft above the ground between 1990 and 2008, with the highest altitude incident reported as a collision between an aircraft and a Griffon vulture at 37,000ft off the coast of Africa.

Content from external source
There's no particular reason for a bird to hit one forward-facing part of a plane more than any other, and yet we quite commonly see these big dents in the nose. The reason is quite simple: the rest of the plane is both much stronger, and largely at an angle from the forward direction. So a bird strike is much less likely to damage the plane in other areas.

The nose cone of a plane is weak because it houses the forward looking radar. The nose cone needs to be transparent to radar, so it can't be made of metal. Manufacturers are starting to use carbon fiber in some cases, however most radar-transparent nose cones are still made of fiberglass.

So it's not that the nose gets hit any more, it's just that it's much more likely to sustain damage. Other areas can still be damaged, particularly from impact with a larger bird. Here's an aircraft windscreen after being hit by two wild turkeys shortly after takeoff. 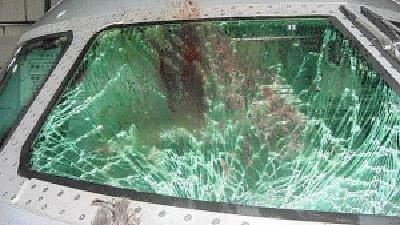 And there are many other examples of bird strikes on other parts of the plane:

But nosecone damage does predominate, due to the structural weakness. 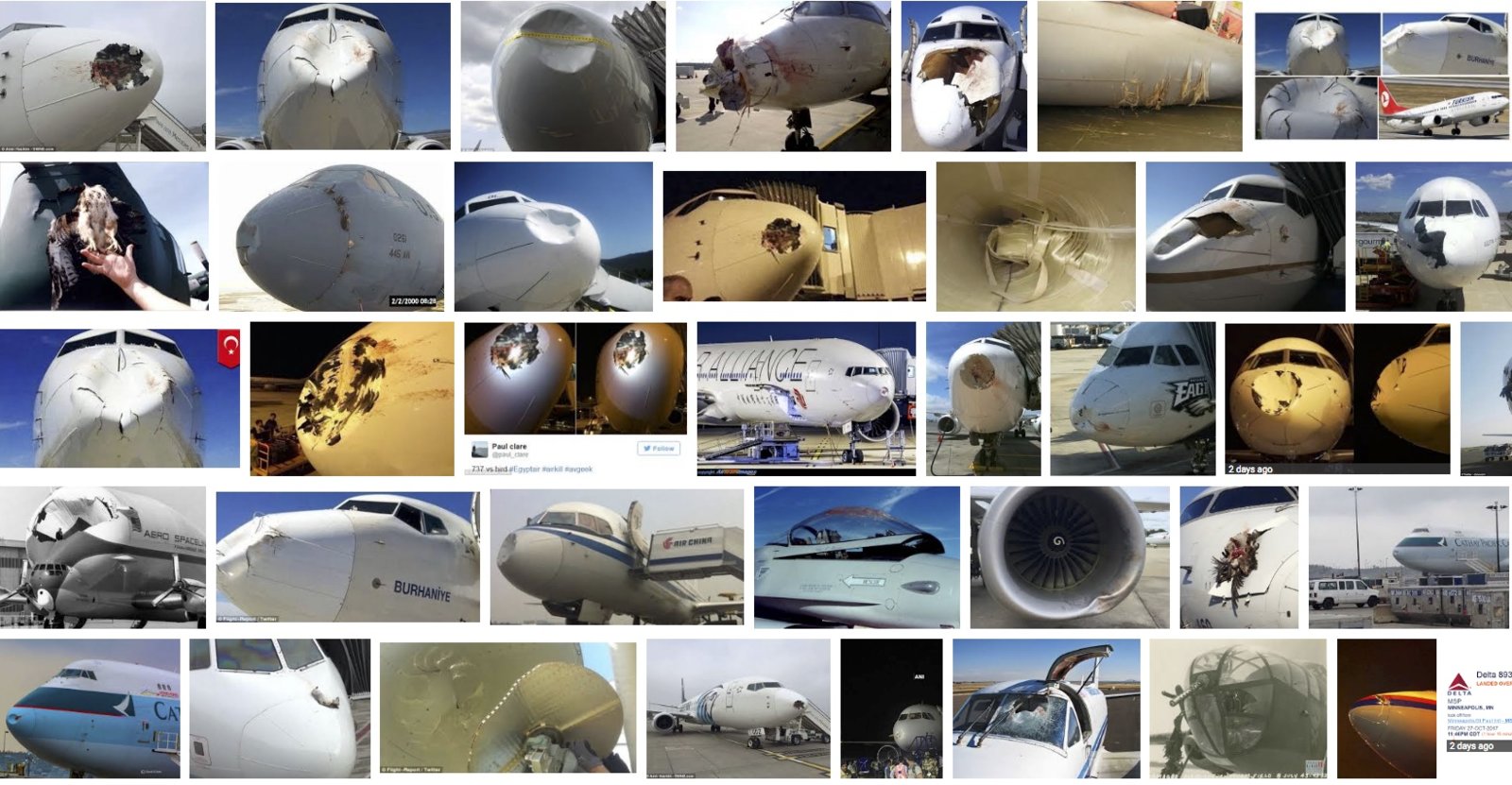 Why is there sometimes no blood? The simplest answer is that the plane flew through some rain while landing. But it's also possible that combination of speed and angle simply resulted in the bird not being in contact long enough for blood to get past the skin and feathers. A significant portion of the known bird strikes don't have any blood or feathers, like this one in Seattle:
Source: https://twitter.com/SeaTacAirport/status/725486898764898304


That one was not quite as big as it looked. Most close-up images of a birdstrike will exaggerate the size of the dent, simply due to perspective. Look at it from a distance:
Source: https://twitter.com/wfaachannel8/status/725468097210146816/photo/1
While the dents are mostly caused by birds, they can also be caused by particularly strong hail. 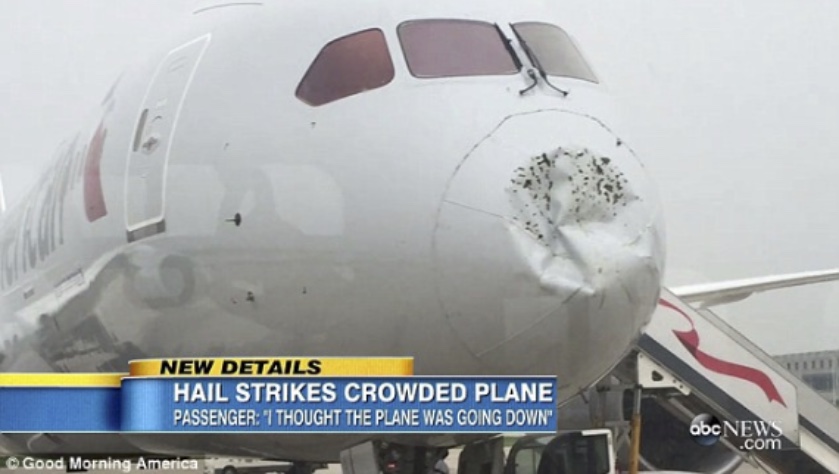 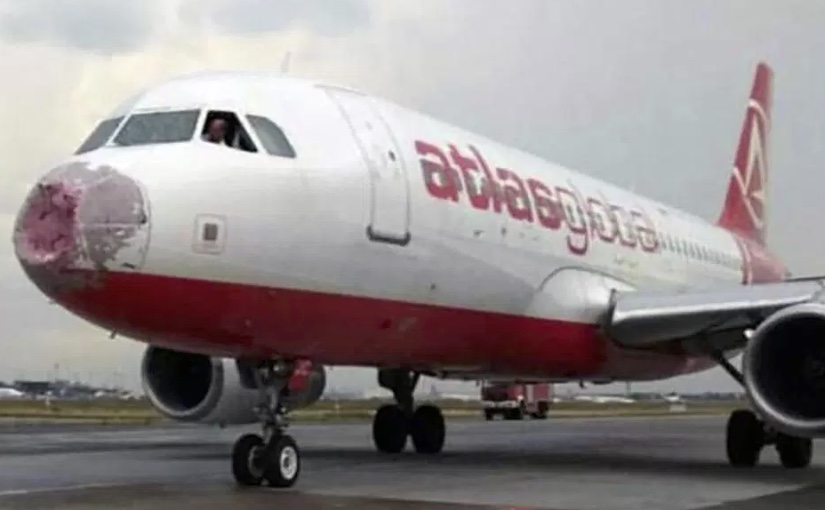 Staff member
A third possibility after "bird" and "hail" is "wind", i.e. the plane did not hit anything, but the continued pressure of the air hitting the front of the cone, combined with some defect or design flaw, made it it crumple inwards.

Such a collapse was suspected with an incident involving a Northwest Jet on July 7, 2008:
http://www.twincities.com/2008/07/07/faa-nwa-jet-damage-was-structural-failure/ 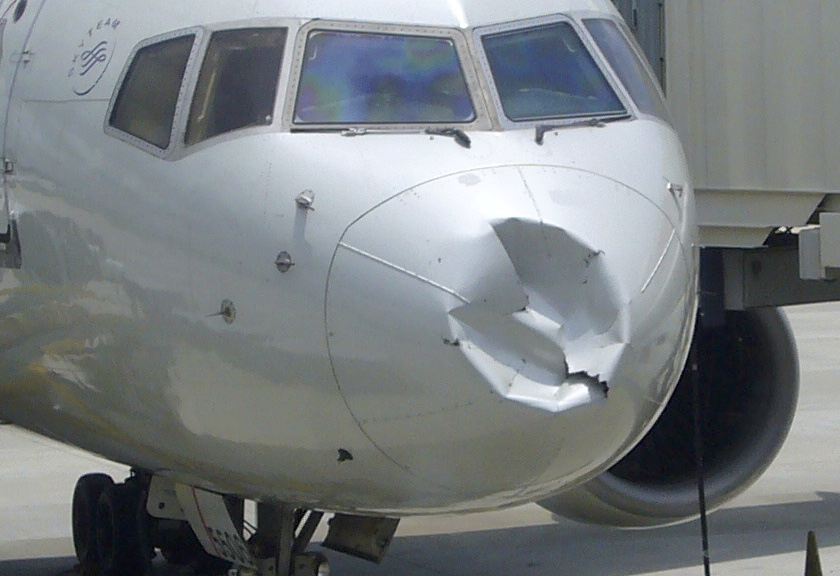 After a Northwest Airlines flight landed at Tampa International AirportSunday with a sizable dent in its nose cone, impact with a bird quickly became the leading theory.

Today, the Federal Aviation Administration is saying that it doesn’t appear there was a collision with a bird — or anything else.

“It appears to be an internal structural failure,” said Elizabeth Cory, a spokeswoman for the FAA. Officials are trying to determine why it failed from the inside, she said.

The Boeing 757 was flying from Detroit to Tampa on Sunday. An FAA spokeswoman told a Florida television station that the pilots heard a bang at 18,000 feet during the approach to Tampa, but there was little other information to explain the huge dent.

Content from external source
It's not clear, however, how they determined this, nor what the final result of their investigation was. It's possible they made the assumption based on the lack of blood, but in a discussion on airliners.net, a couple of pilots reported seeing similar damage from bird strikes without blood.
http://www.airliners.net/forum/viewtopic.php?t=758295

HAWK21M: Few months ago,I've seen a Bird strike to the centre of the radome on a B752 with a dia dent of 6-8 inches.Very similiar but smaller dent.And no blood stains visable.
Was this a Bird hit? Looks very likely.
...
SlamClick: Seems quite likely. Though I've had bird strikes with-and-without blood and feathers remaining.

Content from external source
Later though, someone said it was due to a hole in the radome:
http://www.airliners.net/forum/viewtopic.php?t=758933

airbuske: Not a bird strike as it was earlier reported. There was a pin size hole in the radome that caused the structure to fail/collapse.

Content from external source
I've been unable to locate any official word on this.
Last edited: Oct 31, 2017

A KC-135 was hit by lighting, it blew off the fiberglass nose cone. The loss of the nose cone/radome messes up the airspeed big time, the same would happen with deformation of the nose cone, it would mess up the airspeed, disturbing the airflow to the pitot tubes and AoA probes. Any weakness, dent or damage to the radome/nose cone, could have it partially collapse during flight due to aerodynamic loading.

I saw balloons, party balloons at 29,000 feet over Oregon, and reported to ATC. If balloons are carrying stuff, that would do damage at 500 knots.

William Bell: I can vouch for this.

Spent six years as a crew chief in the Air Force. I saw (and had to clean up) dozens of bird strikes. I think there may have been one that was on the plane's nose. Most were on/in the engines, wings, and vertical stabilizers.

Metabunk: William, was this on planes that had a similar weak nose cone? And did they ever leave a "clean" dent, with no blood, etc?

William Bell: I worked on A-10s, which has fairly typical noses. They certainly weren't hardened or anything.

I think the one I saw on the nose was a clean dent, yeah. So were a few elsewhere on the aircraft. I remember a couple of clean dents to wings, and a hole punched clean through a vertical stabilizer. (Only through one side, though, not a through and through.)

One on a speed brake was particularly nasty. Blood, guts, feathers, the works.

Content from external source
So this verifies that bird strikes can be clean.

Does this posting mean that there is a conspiracy theory about hitting mystery items at 30,000' all because a basketball player commented to twitter that they must have hit something at 30,000? Wow!

(This doesn't make any difference, but in your first image containing a collage of photos you've got the British Airways 777 that crash landed just short of the runway in London after the dual engine failure due to ice clogged in the engine's fuel/oil heat exchanger. It's the white aircraft shot from behind with the left gear smashed up through the top of the wing. The bottom right photo, second from the edge.
But it really doesn't make any difference of course!)
You must log in or register to reply here.

Explained: Why Biden is boarding C-32 instead of VC-25