Explained: Why Clouds Appear Behind the Sun and Moon

TEEJ said:
YouTuber trying to debunk Mick's experiment video. [He's a flat earther and thinks he's showing not only clouds but BIRDS flying behind the sun.]

[The birds in my video] are heron. They are big. They have a 65-70in wingspan and are about 4-5ft long in the air. I did some rough calculations and the sun may be 80-100ft wide. I have been saying [the altitude is] less than 10 miles, but 3 miles may be more like it. I know people will say, "planes would be flying over the sun", but I believe this is a simulation and the distance to the sun is based on each of our locations. So if we are in an airplane the sun would still be 3 miles above us and look just like it does from the ground.

Rory said:
. I did some rough calculations and the sun may be 80-100ft wide
Click to expand...

wonder what the wingspan of a seagull is.. Of course his entire experiment proves Mick's experiment, so it is a confusing video. 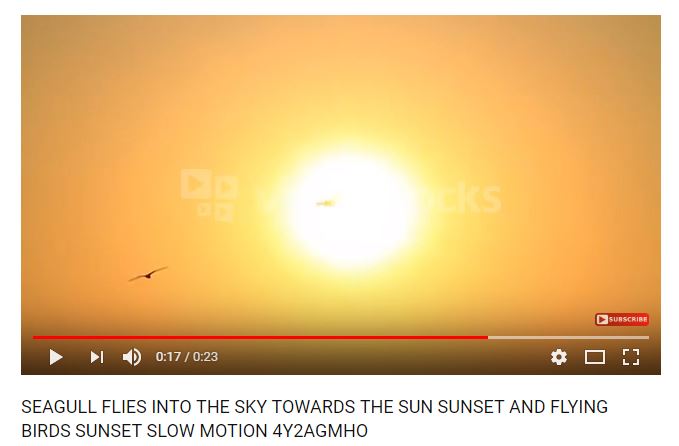 I think all bets are off after someone makes a statement like this. Why are they even attempting to measure anything if they feel like nothing is real, and that observable reality varies by individual?

The "everything is a simulation" is kind of the end point of conspiratorial thinking - once you've gone past the Moon landings being faked, Sandy Hook being faked, and the planes crashing into the WTC being holograms, then it's not a huge step to the Mandela effect, and then simulations.

Being in a "simulation" is an interesting philosophical idea, and it might even eventually be kind of real. But for practical purposes it's meaningless. The universe runs of very consistent and very accurate laws of physics. Things like the position of the sun are measurable, often to incredible levels of accuracy.

It's nothing to do with the focal length. Your camera is ADJUSTING THE EXPOSURE when you zoom in and out. Switch it to manual model M around 1/1000 f/5.6, fix the focus with MF, focussed on the branches, and fix the ISO at 100 or so. Then when zoom in and out the exposure will not change and the image of the branches in front of the sun will simply get bigger and smaller.

deirdre said:
wonder what the wingspan of a seagull is..
Click to expand...

Depends on the gull, but the larger ones like The European Herring Gull and The Greater Black Back can reach up to 5' 7"

Whitebeard said:
Depends on the gull, but the larger ones like The European Herring Gull and The Greater Black Back can reach up to 5' 7"
Click to expand...

I dunno. I saw one the other day that stood about 8,000 feet tall. But then, my individual simulation is probably groovier than most.
D

Perhaps you could give an example of what you mean?

This is due to Mie scattering - aerosols scatter light predominantly in the forward direction. It results in thin clouds and contrails being brightest when backlit. 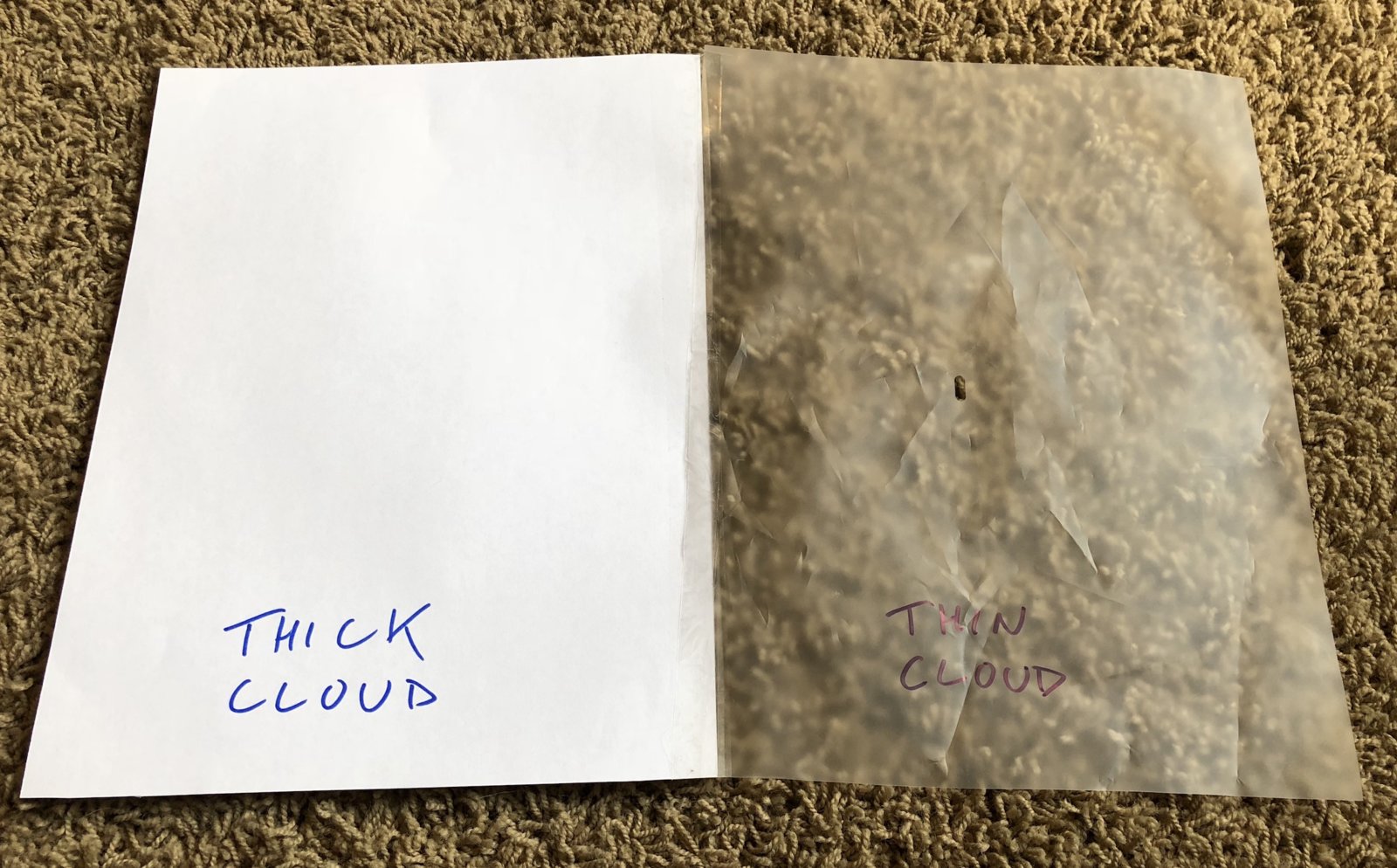 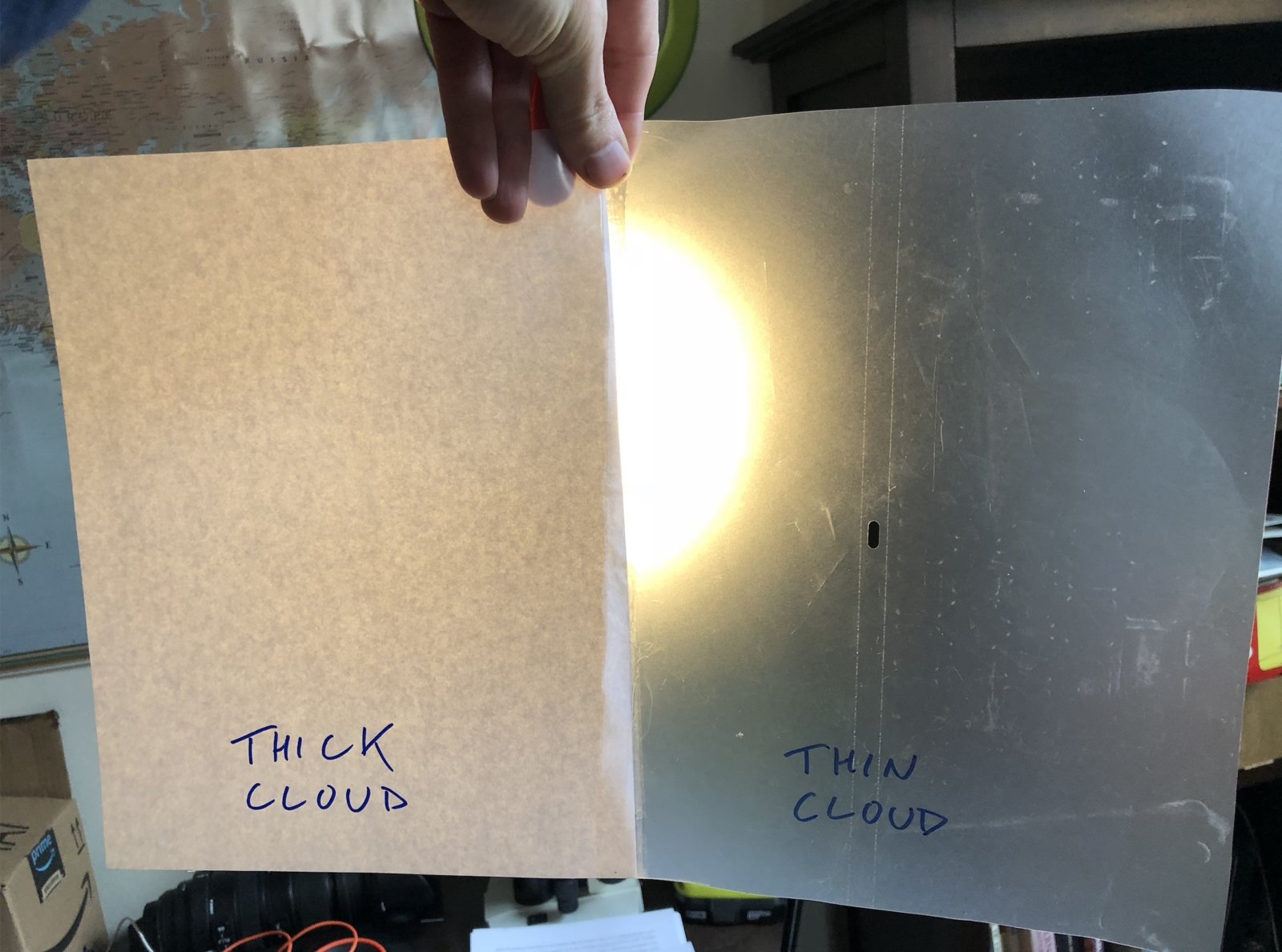 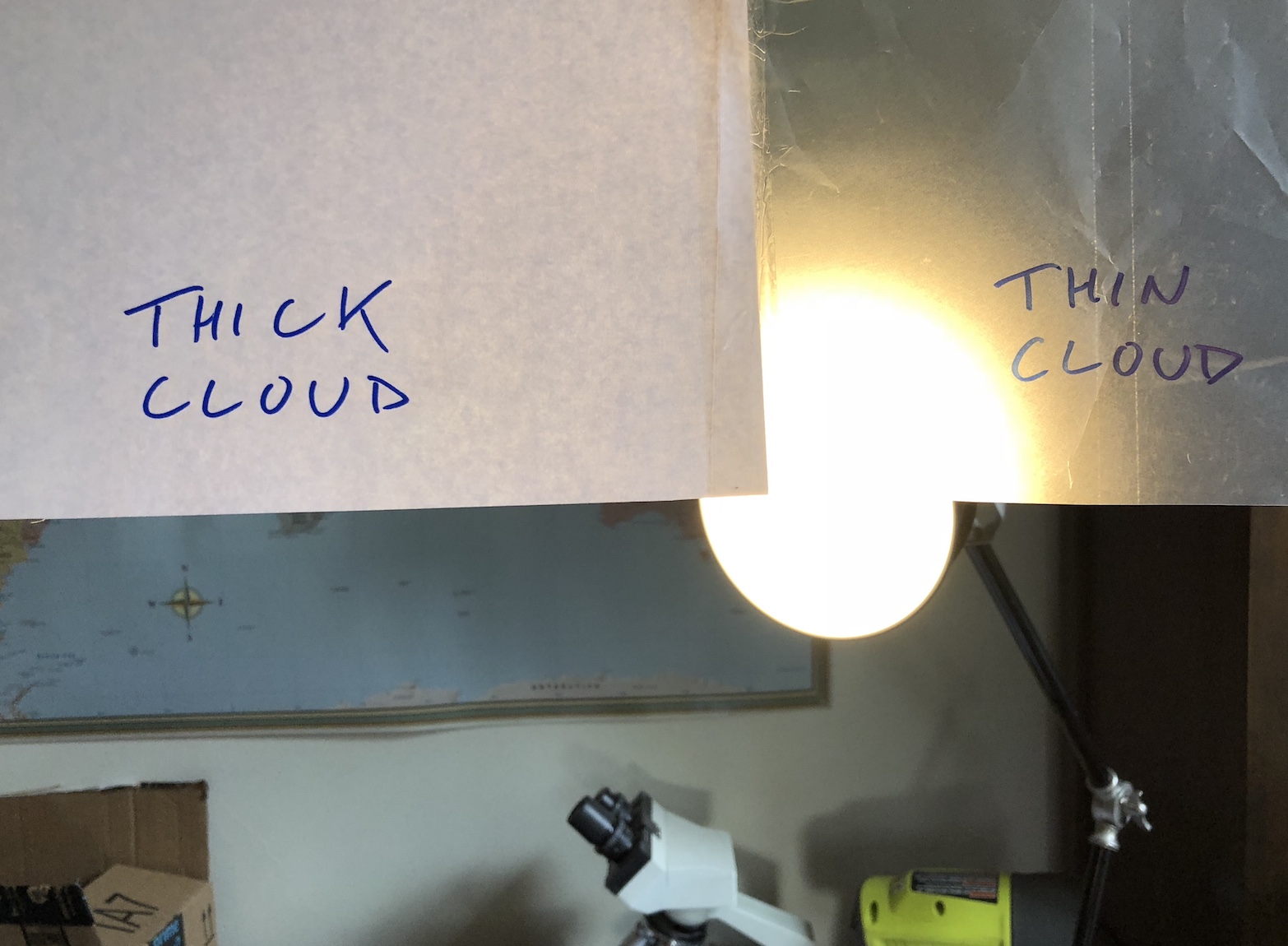 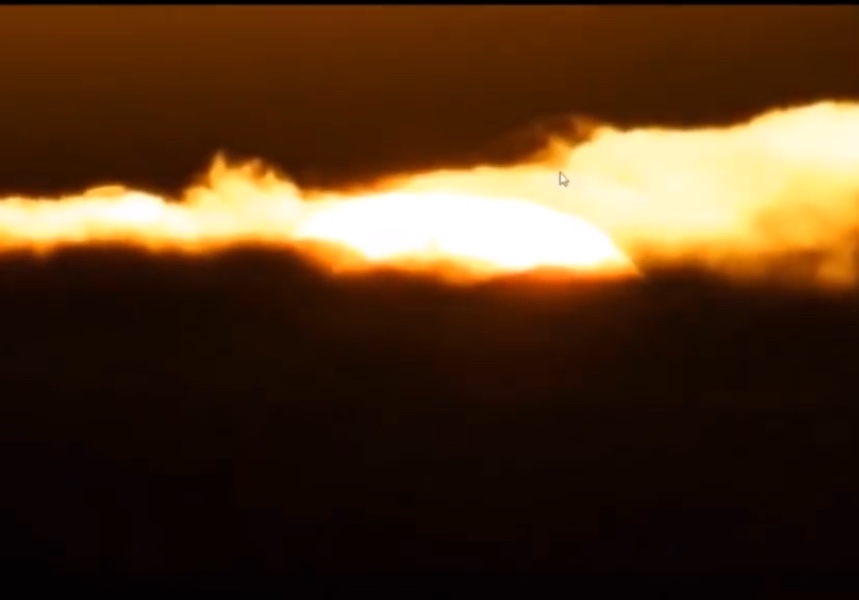 Interesting topic... I've been discussing this one with a friend and can see both sides of the argument. It really does look like the sun is in amongst the clouds.

From Mick's theory the less dense a cloud is the more light it will allow through and if its too bright for the low density of the cloud then it will be saturated with light. From videos and what we've observed this doesn't always seem to be the obvious case (Please see picture below as one example). In my opinion, the cloud which seem to be going behind the sun appears to be a lot denser than the thinner/ less dense cloud in front. Curious as to what explanation there may be for this? 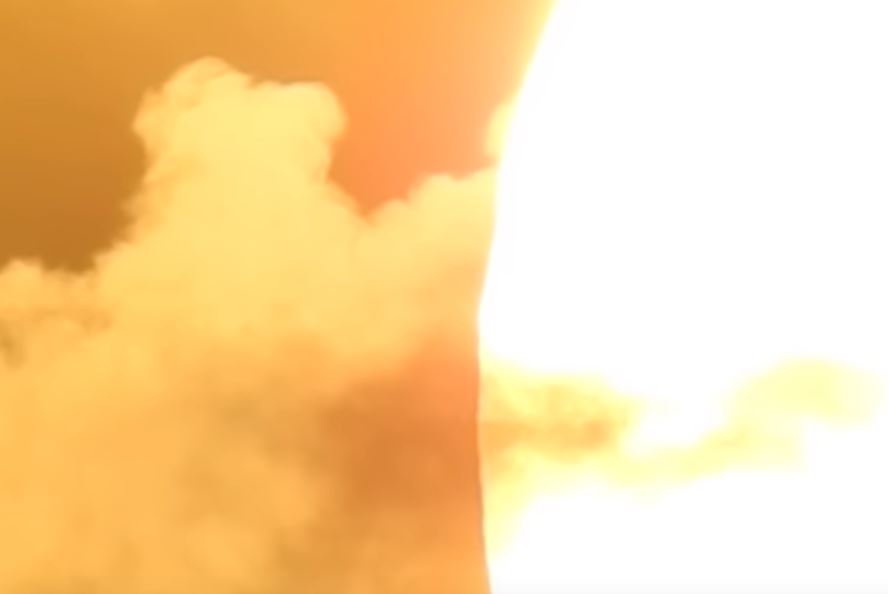 Jonatron said:
In my opinion, the cloud which seem to be going behind the sun appears to be a lot denser than the thinner/ less dense cloud in front. Curious as to what explanation there may be for this?
Click to expand... 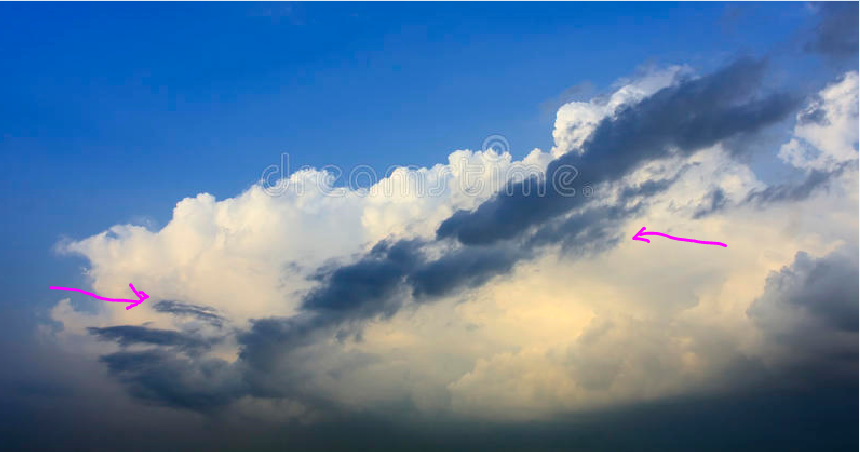 Here is a weather man explaining why clouds look dark. There were lots of sites explaining it though if you want to google further.


0:55 It's completely in the shade so you see it dark. So that's one of the main reasons
....
1:26 Light has to travel all the way through this cloud and so the light gets scattered and absorbed.

Thanks Deirdre, I believe I understand what you are saying but just to clarify, as my mind works better with images. Is this how they are describing it;

"This cloud" being in front of the sun but we are unable to see it as the sun is too bright, causing a shadow on the smaller cloud behind it? Thus, making it look darker? 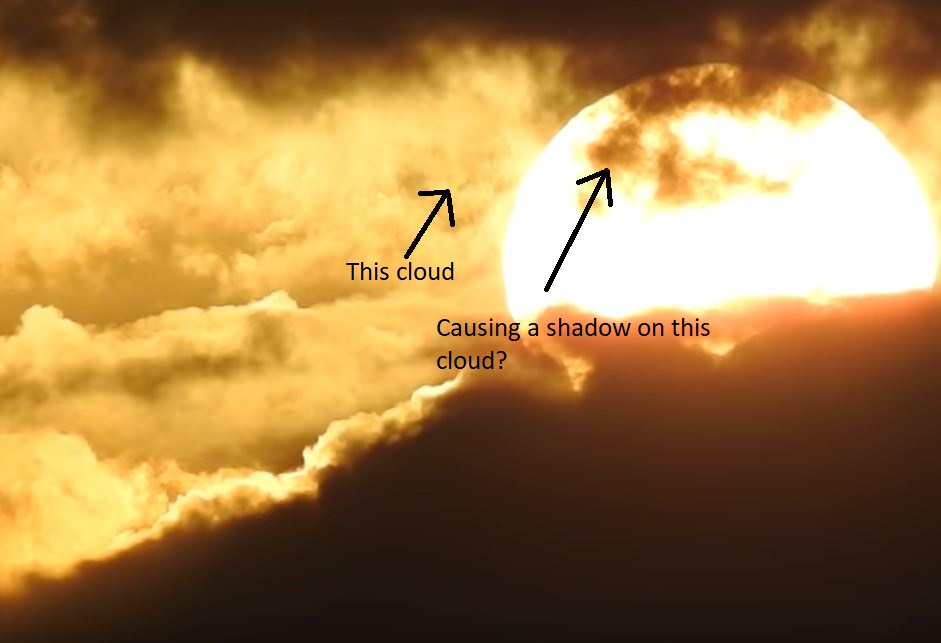 Staff member
Dark clouds are dark because the path between them and the sun blocks more sunlight than white clouds. That's why they are dark.

When a cloud is in front of (or right next to) the sun, then it's being lit from behind 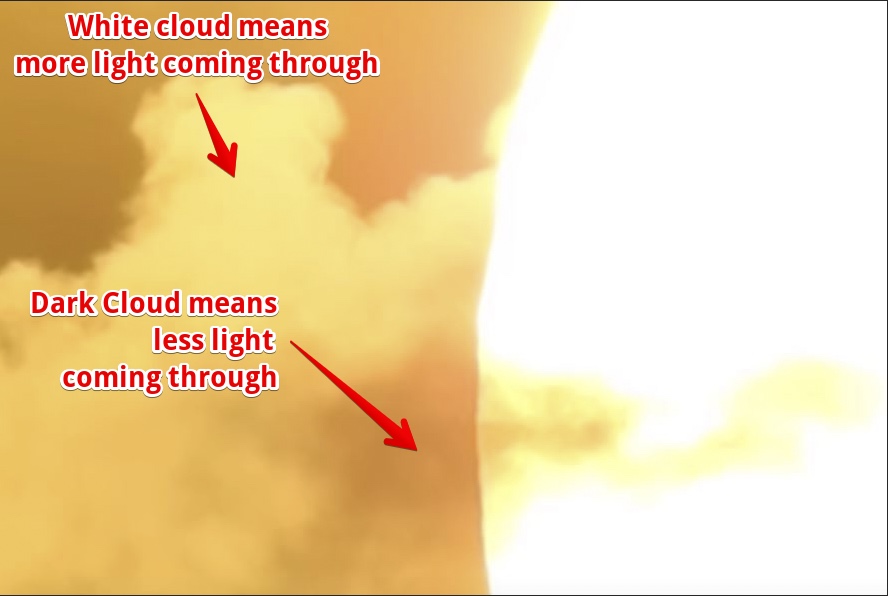 This does not mean a dark cloud HAS to appear in front of the sun (or that a light clouds has to appear behind it), but it's a good indication.

And remember those white clouds would actually be visible if you got the exposure right. They are in front of the sun, but since the sun is super over-exposed it's just blown them out.

Jonatron said:
Thanks Deirdre, I believe I understand what you are saying but just to clarify, as my mind works better with images. Is this how they are describing it;

"This cloud" being in front of the sun but we are unable to see it as the sun is too bright, causing a shadow on the smaller cloud behind it? Thus, making it look darker?

Think of "this cloud" as being a layer that most of the image. Everything in front of it is made darker. Let's call it the "cloud layer". Then you've got the dark clouds. Let's call them "scud" clouds.

Consider what the camera might see when you point it at the sun.

1) Unblocked sun. Light goes from sun to camera. It's too bright, so just looks white.
2) Sun through cloud layer. The light goes from sun to cloud layer to camera. The cloud layer blocks a bit of light, but it's still too bright, so it looks white. So cloud layer looks like it's going "behind" the sun.
3) Sun through cloud layer and scud. The light from the sun still goes through the cloud layer which dims it slightly, and it also goes through the scud, which darkens it even more. Now it's dark enough to register as less than white on the camera, so we see some of the shape of the cloud in front of the sun.

A "negative filter" is just a post processing that's done to the image after it's taken, inverting it. It's still essentially the same thing. Inverting an image can make some detail be more apparent because your eyes respond different to light detail vs. dark detail.

Also when you display the sun as a black ball, it makes it harder for your brain to understand what is going on, and so it intensifies the illusion. 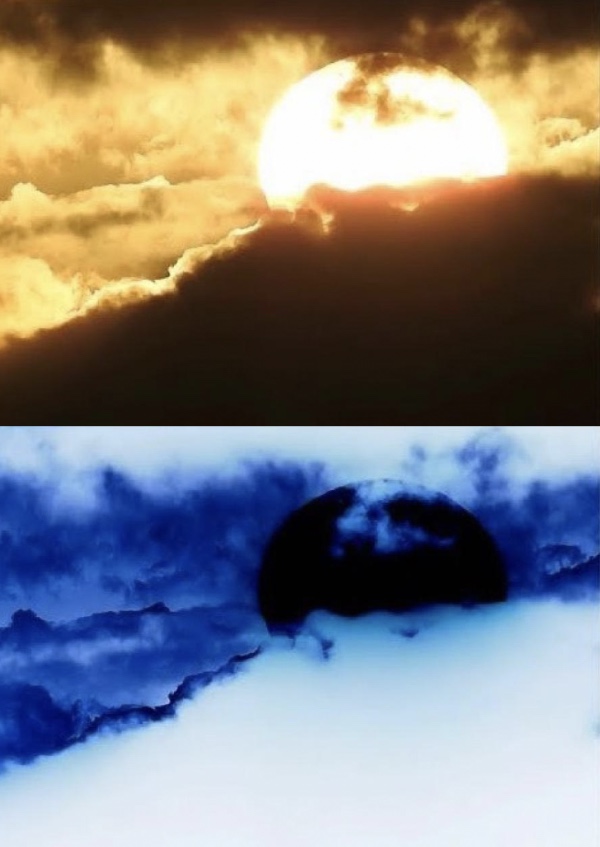 After reading this thread, it seems to me it would be helpful for newcomers (some of whom say they're having a hard time understanding the "experiment") to show a video of the sun (or moon) passing apparently through clouds, but have the screen split across the middle with that video in the top half, and a second one in the bottom half. I don't know how to split videos like that but I think you know what I'm referring to.

The video in the bottom half could show the same subject because it's a video taken at the same time as the one on top, using a different camera, with exposure set to manual, and let it be greatly underexposed such that the clouds that got washed out in the top video would still be visible in the bottom. This could be accomplished using polarizing filters adjusted for very dark, like getting close to a solar filter's effect, but not quite that dark. The idea being to get the otherwise overexposed clouds to still be visible. Some trial-and-error might be necessary to get the right exposure set manually, and it would be difficult to then operate the other camera at the same time once the proper manual exposure is established, so it would be a lot like sports photography (which I have some experience with) where you have to anticipate a great play or action in ADVANCE of it happening, since if you're not ready to press the shutter release, by the time you get ready, the play already happened and it's too late.

While I realize that perhaps not ALL of the seemingly behind-the-moon clouds would become visible again, even if so much as a portion of them were seen in the bottom half it would be effective.

When both videos are played together one on top of the other, the viewer could then see how the camera's exposure makes a lot of difference. It takes experience with photography to learn this, and it's something most people have no desire to learn, thus their inability to grasp the meaning of what this thread has to offer.

I can imagine a split screen view of the same moon (or sun) moving from the left side all the way across the screen to the right side, with the same thing going on in the top half and in the bottom half of the screen. But in the top half the same clouds you see appearing to go behind the celestial body are in the bottom half really moving in front of the body. The exposure could even be changed along the way to emphasize how it allows the viewer to see clouds in front, that he had thought were going behind.
Last edited: Aug 25, 2018

Is this same principle in play with the NASA STS-75 Tether "incident"?

The video footage (Source: https://youtu.be/ZxIq2ptv1N8
) is fairly contextless with no reference objects other than the tether itself which I'm assuming is brightly lit. So if it is sufficiently brightly lit, would it cause objects - dust, ice particles etc in the foreground to appear to pass behind it?

(apologies if the STS-75 UFO thing has already been debunked, i've not come across a decent explanation for the claims of mysterious goings on made in the video above).
You must log in or register to reply here.