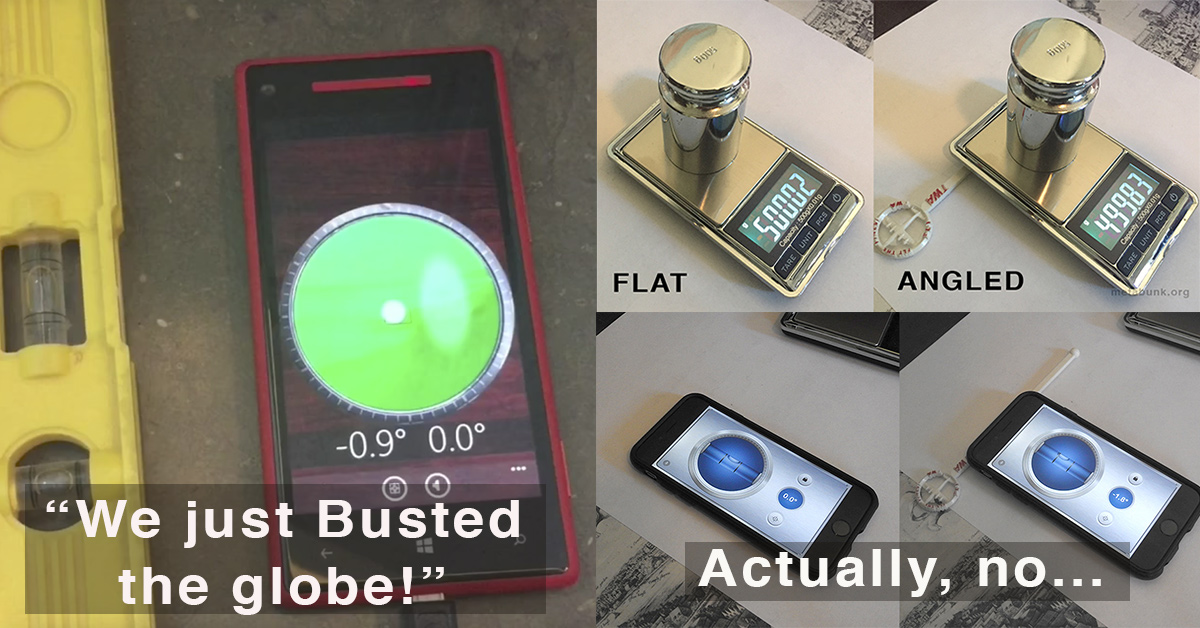 In a video titled "*** 4,519 MILES & NO CURVE! Globe Debunked Once And For All *** RESEARCH FLAT EARTH", Youtuber Paul On The Plane uses a phone with a virtual bubble level app in two locations: Seattle, in the North West of the United States, and Dublin, Ireland.

So assuming Paul is being serious here (and that's a big "if") why would he make this rather odd claim?

The justification given is that phones need to be told which way is down. Paul claims that phones don't have any way of actually detecting the acceleration due to gravity. This seems to be based on a misunderstand of how accelerometers work.

Phone have two type of motion detecting sensors. Accelerometers and gyroscopes. The accelerometers detect forces, which here are either actually accelerations, i.e. changes in velocity (where velocity is speed in a particular direction), or the force due to gravity. Gyroscopes detect changes in orientation (the angles). The level apps use the accelerometers, so let's focus on those. How do they work?

Accelerometers are essentially like a tiny mass on a tiny digital scale, miniaturized so it fits flat inside a chip mounted level inside your phone. The weight of the mass (called a "proof mass") changes based on the angle of the scale (and hence your phone), and this change in weight is what tells you how much you are off level. You can demonstrate this with any normal scale. 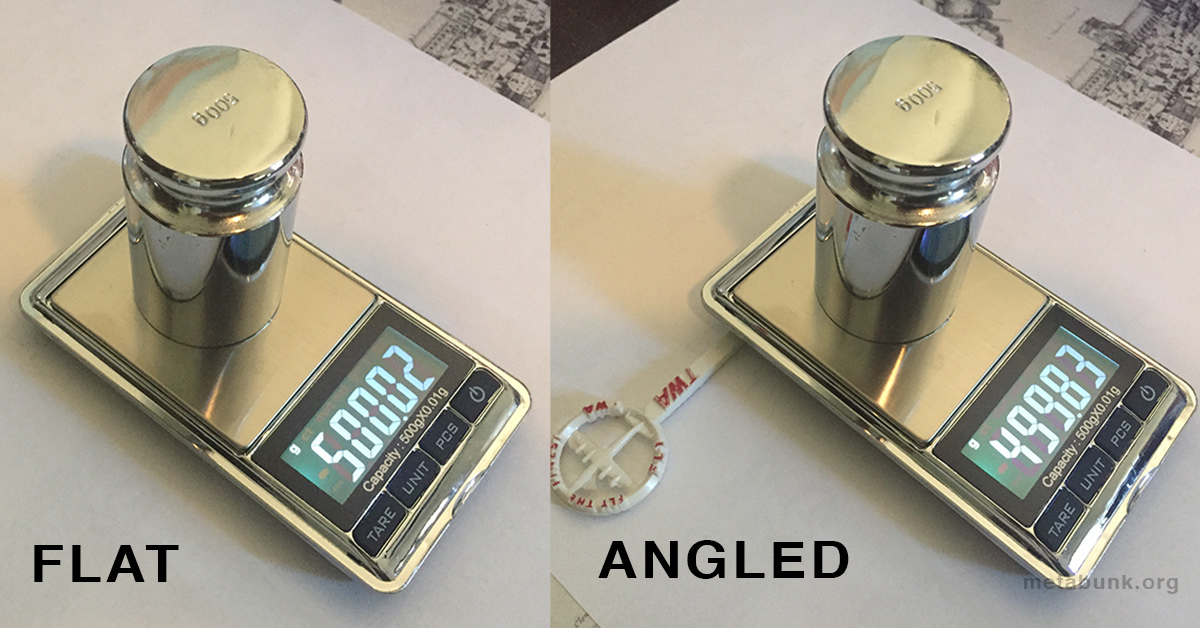 We've got 500.02 for the scale flat on the table (which seems flat based on my physical bubble level) then 499.83 at an angle. That might not seem like much but we can do the math, which is very simple trigonometry:

So we can use a scale to measure gravity, and if it's a digital scale inside a phone then we can use the very simple formula acos(tilted weight / flat weight) to get the angle of the scale. This is exactly equivalent to this: 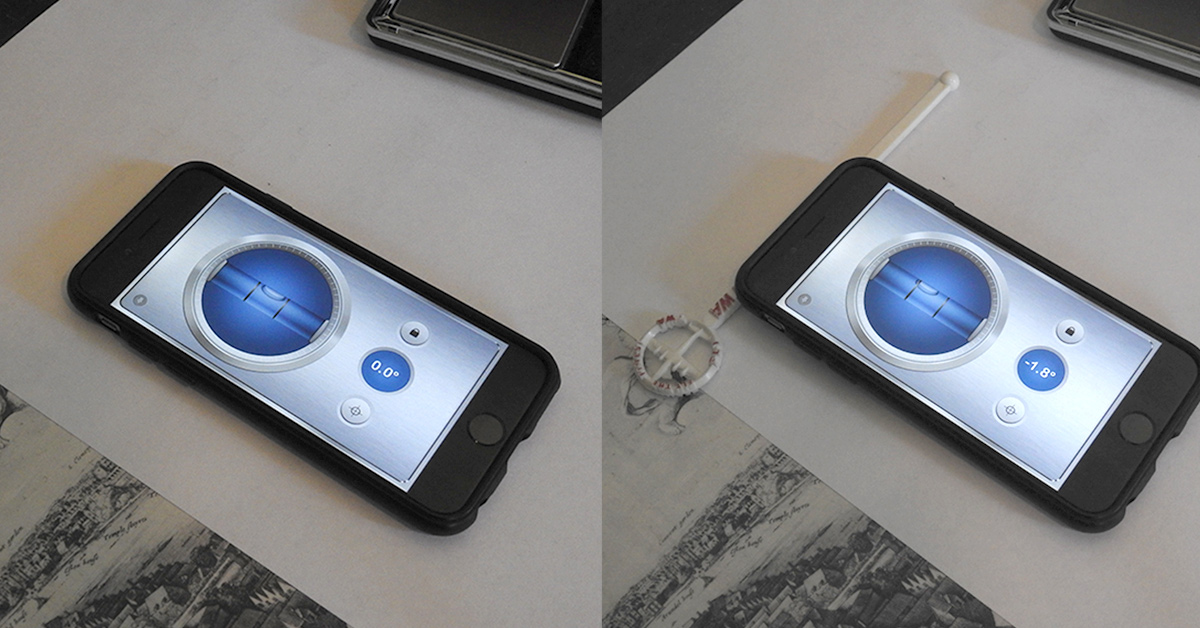 Of course if you took your scale and your 500 gram weight from Seattle to Dublin, you would not expect it to weigh 400 grams in Dublin. It would still weigh 500 grams with the scale placed on the floor. So obviously the same thing is going to happen with your phone.

But how do they make a scale (with a weight on it) that's small enough to fit in your phone? The answer is MEMS. MEMS stand for Microelectromechanical systems, and is basically very tiny machines with electronics that fit inside a very small chip, suitable for including in a phone.

Your phone actually has three. You need three because it's possible to accelerate in a direction that's at right angles to a single sensor (or two sensors) which would then not detect the acceleration - like if it were to move the scale around on a smooth flat surface the weight would remain the same. These three sensors are normally packaged together as a single "3-axis accelerometer".

The design of a three axis accelerometer is interesting because it has to be as flat as possible. This is straightforward for the Y (forward/backwards), and X (left/right) accelerometers axes, which look something like this: 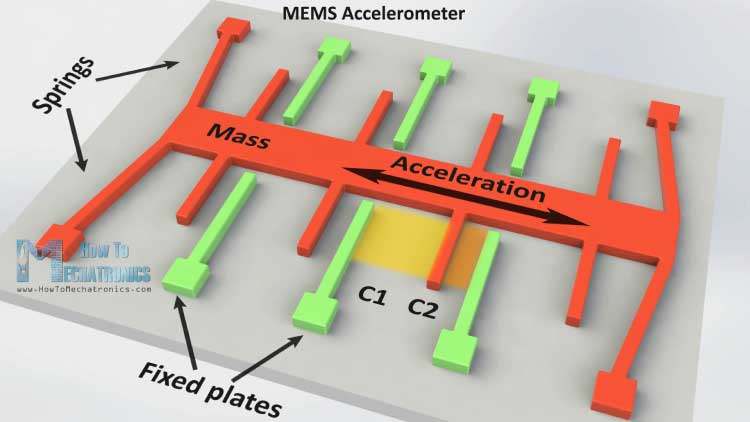 The proof mass in this case is the red pronged bar in the middle mounted on springs at either end. If you tilt this left or right, then the mass will get closer to the green fixed plates. This changes the electrical capacitance of the device, which can be measured. You can then translate that change in capacitance to the measured weight, and hence the angle relative to gravity (or the amount of acceleration when you move your phone).

There's two of these mounted flat in your phone at right angles for the X and Y directions. But you can't really mount one vertically, as it's a waste of vertical space, would need extra supports, and be difficult to get exactly at 90°. So a better option is an accelerometer that can be mounted flat, but still measures the vertical accelerations.

This is generally what is called a torsion z-axis accelerometer, and it looks a bit like this: 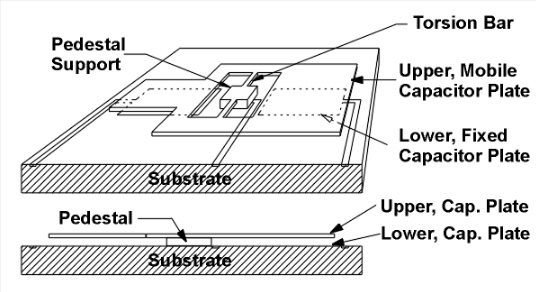 The upper plate is the proof mass. It's heavier on the right than the left. The torsion bar will twist when a force is applied, moving the upper plate closer to the lower plate, which again causes a detectable change in capacitance, allowing you to measure the weigh of the mass, and hence the direction of gravity. This is basically like my scale+weight setup above, just miniaturized to an extreme.

In summary: all the phone accelerometer is doing (when not accelerating) is measuring the weights of the proof masses in three directions. The weight of the Z-axis proof mass will tell you the angle from horizontal the phone is in. The other weights tell you which direction it is tilted in. This works exactly the same wherever you are on the globe, and it needs no calibration to tell it which way is down.

We can actually verify this in another way - by looking at the library Apple provides for developers to access the raw accelerometer data. This is the Core Motion API, and it provides functions for getting the raw X, Y, and Z accelerometer values. But it does NOT provide any means of specifying a "down" direction. The phone just measures it.
https://developer.apple.com/documentation/coremotion/getting_raw_accelerometer_events

Figure 1
Accelerometers measure changes in velocity along the x, y, and z axes 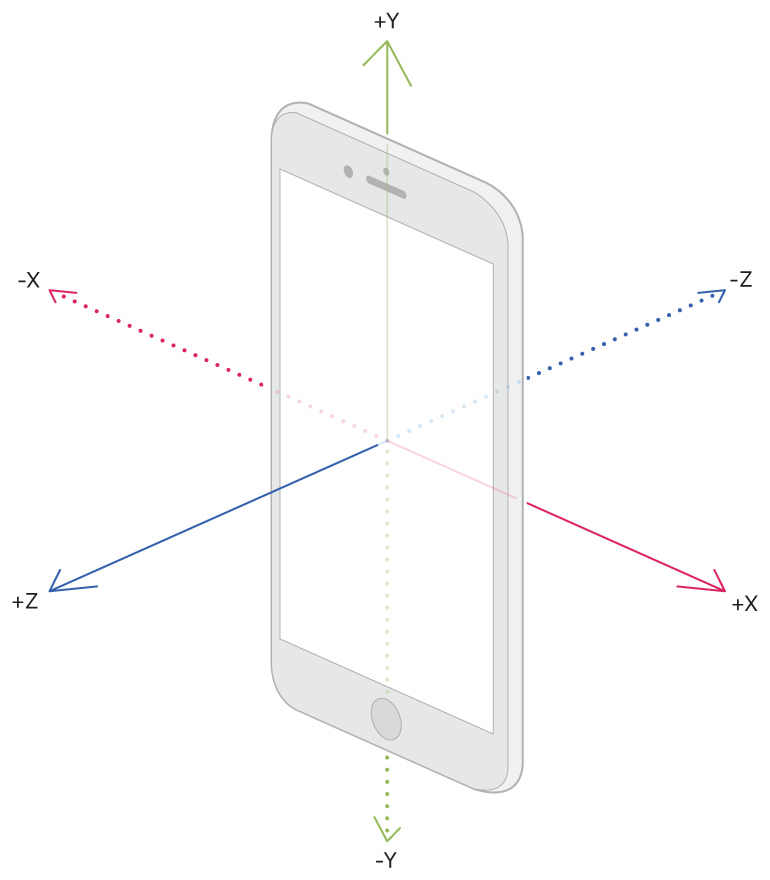 So with the phone laying flat, anywhere in the world the value from the Z-axis accelerometer is going to be g. We can see this by looking at the raw values (which again cannot be calibrate at the raw level): 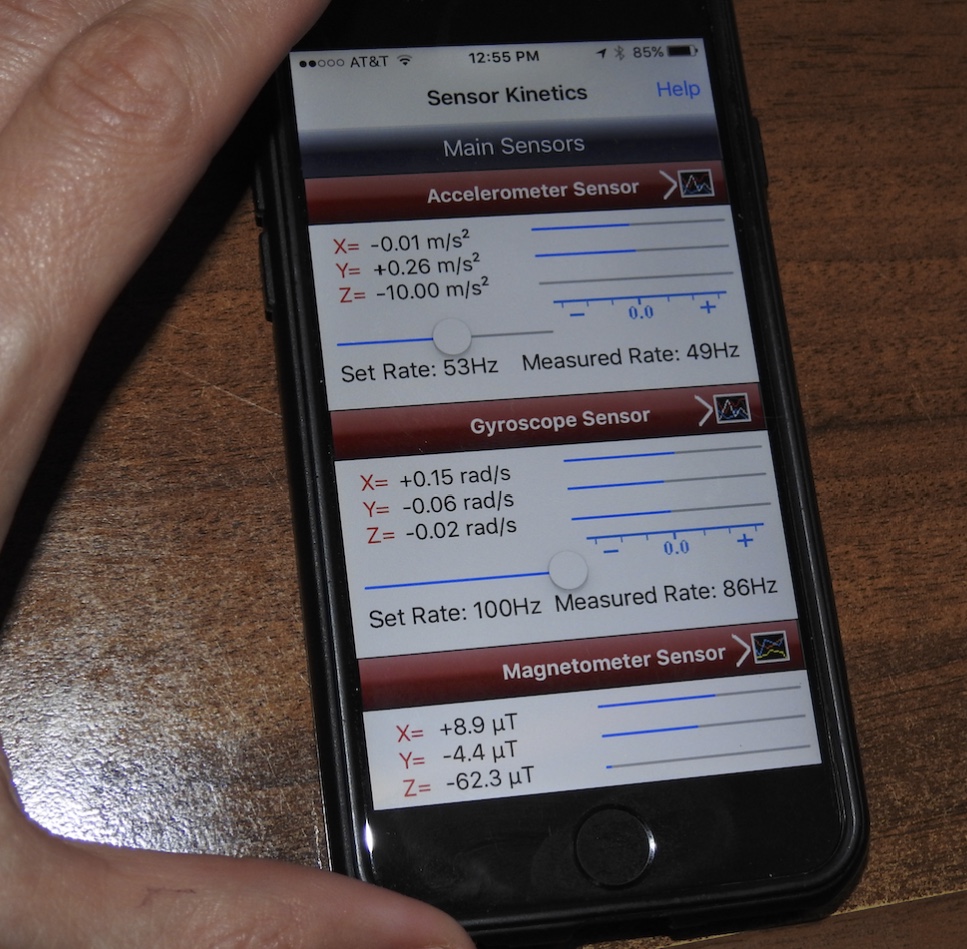 Accelerometer is at the top. Now in theory this should by Z=-9.81, but sensor noise, very minor mounting differences, and manufacturing variables mean that it's not particularly exact. It's certainly in the right ballpark, just 2% off.
Last edited: Jun 16, 2017

Staff member
Minor note, I initially thought the difference in angle between the scale calculation (1.5°) and the phone level measurement (1.8°) was just down to the accuracy of the instruments. But then I realize the heavy weight on the scale was actually bending down the plastic swizzle stick slightly. When I added the weight to the phone it read the correct angle of 1.5°. 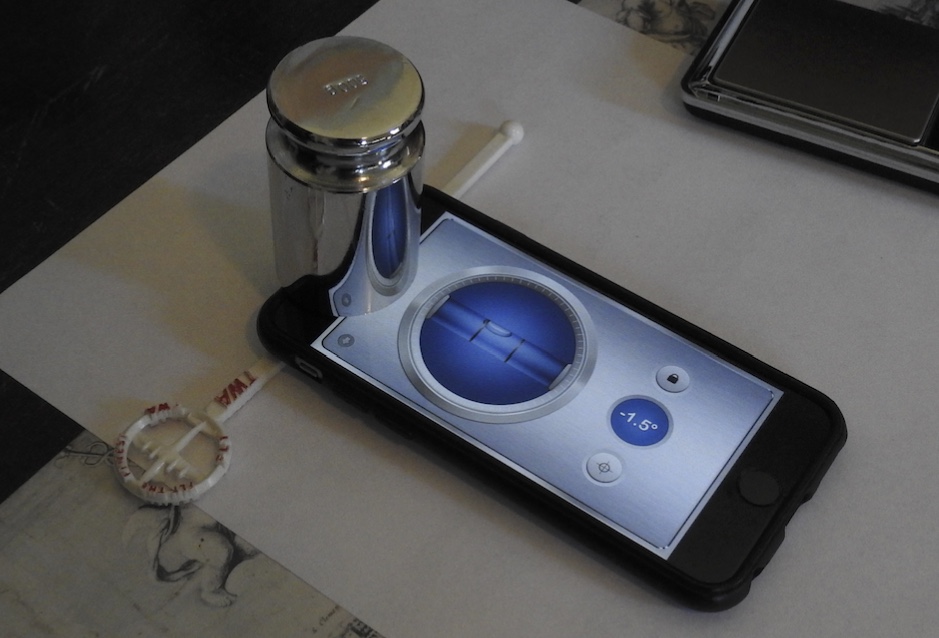 Staff member
For a practical demonstration of how the weight changes based on angle (and hence how you can determine angle from weight), see:
Source: https://www.youtube.com/watch?v=ztmrT1eybOg


It's basically just a scale with a weight on it where the whole thing can be tilted. There's a protractor to measure the angle. Then there's another spring gauge that shows where the rest of gravity is going.

When I heard this argument, it was in the form of: "if the earth is spherical, then a phone level app will read an increasing angle as it is moved between points on the earth's surface. This is experimentally shown not to occur, therefore the earth is not spherical."
Last edited by a moderator: Jul 16, 2017
M

Banned
Certainly not relevant to the flat earth argument but interesting none the less, precision weighing scales such as hospital scales must be calibrated at differing points on earth due to slight gravitational variations on the uneven surface of the earth... it bulges slightly at the equator and is also very slightly pear shaped, Mount Everest is the highest point above sea level but is not the furthest point from exact centre of earth, that honour goes to Chimborazo in Equador.. Anyway hope to see you soon in your Contrails forum.
A

The readings I've got from my Galaxy S7 Edge: 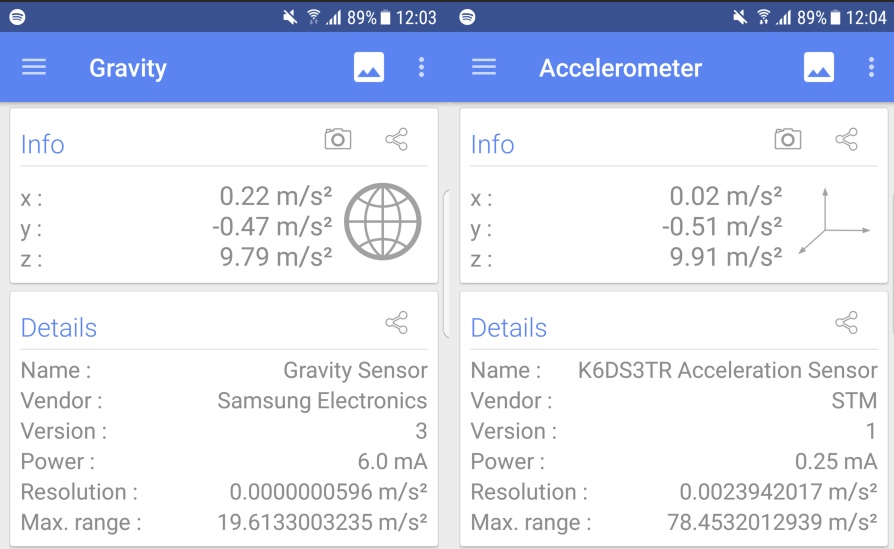 Antrax said:
The readings I've got from my Galaxy S7 Edge:

The "gravity sensor" is just a virtual (software based) sensor that attempts to calculate the orientation of the phone ignoring the phone's motion. The important numbers here are from the raw accelerometer data for the hardware sensor (on the right above).

Many of the Flat-Earther's arguments seem to revolve around gravity (or however they choose to name it) changing direction on a globe, which in their view contradicts 'common sense'. Obviously the spherical earth is imagined like an actual globe, standing on a solid surface which provides a clear 'up' and 'down' reference.

I have experienced that further questions about what 'down' should be in the context of space lead to sensitive reactions - from retracting to blocking to ad hominem attacks - even in the most polite exchange.

I assume this is somewhat of a weak point in the FE worldview.
You must log in or register to reply here.