Staff member
Army Chief of Staff Gen. Mark Milley was the keynote speaker at Norwich University during its Reserve Officer Training Corps Centennial Symposium, Northfield, Vermont, on April 21, 2016. During his speech he talked about "little green men and hybrid armies" [at 34m40s]


This refers to forms of unconventional warfare carried out by Russia in the Ukraine. Little Green Men is a term used for anonymous forces who wore nondescript green military style clothing, (and were presumed to be Russian SPETSNAZ). The term was first used by the local Ukrainians, then used in academic papers:
http://www.jhuapl.edu/ourwork/nsa/papers/ARIS_LittleGreenMen.pdf

In the Crimean operation, unidentified Russian military personnel entered the conflict region and preempted the adversary by rapidly occupying decisive points—airports, media outlets, and other key infrastructure. Armed but not wearing uniforms, the Russian agents provided Moscow with deniability—if not plausible deniability. The pro-Western press called the intruders little green men, but Dugin refers to them as “nice men”—citing their politeness and their diplomatic withdrawal once an area was secured. The goal is the very essence of Sun Tzu’s “winning without fighting” ideal. In Crimea, it worked. In eastern Ukraine, it fell short and led to bloodshed.

And the usage was quickly adopted:

In early 2014, “Little Green Men” began to appear in Crimea. Working with ethnic Russian groups on the peninsula, these men soon began inciting protests and convincing members of the local population to shift their allegiance to the Russian government in Moscow.2 The North Atlantic Treaty Organization (NATO) soon began to use the term hybrid warfare to describe Russian actions in Crimea, and later in Ukraine. The early phases of Russian hybrid warfare are similar in nature to unconventional warfare, and rely heavily on Special Operations Forces (SOF) that employ linguistic and cultural skills to leverage social movements and organizations within a population.

a. Hybrid Warfare: Russia in its ‘Near Abroad’ The most immediately visible form of novel warfare practices during “peacetime” can be seen in Russia, the inheritors of what Kennan referred to as “the most refined and effective” conduct of Political Warfare “of any in history.”4 Since the early spring of 2014, Russia’s form of Political Warfare has emerged as intensive Hybrid Warfare in Ukraine. Russia currently employs special operations forces, intelligence agents, political provocateurs, and media representatives, as well as transnational criminal elements in eastern and southern Ukraine.5 Resourced and orchestrated by the Kremlin and operating with differing degrees of deniability or even acknowledgement, Russian Hybrid Warfare uses such “little green men” for classic UW objectives. These objectives include causing chaos and disrupting civil order, while seeking to provoke excessive responses by the state’s security organs, thus delegitimizing the Kiev government.

From the Army Times

Army Chief of Staff Gen. Mark Milley, in an April 21 speech to celebrate the 100th anniversary of the ROTC program at Norwich University, talked about the complex world the young, soon-to-be military officers will face.


Wait, what was that? Did Milley just say cadets will be battling little ... green ... men?!

The phrase "little green men" typically refers to foreign troops or paramilitary forces who dress in green attire instead of traditional military gear, the officials said.

"It does not mean fighting troops from outer space," the officials said
http://www.armytimes.com/story/mili...en-men-and-sets-off-ufo-enthusiasts/83705636/

Hybrid armies or warfare I get, a known term. The little green men is one I never heard but could be a euphemism new to military discussion. I attended and completed Air War College in 1998.

I believe I have the answer. It is of Russian origin.

George B said:
I believe I have the answer. It is of Russian origin.


"Unidentified defending objects"[edit]
The uniformed "local self-defence" forces, equipped with camouflage and modern Russian weaponry,[12] but lacking identifying badges or insignia, operating during the 2014 Russian military intervention in Ukraine were also called "martians"[13] or "little green men" by the locals and the media.[14][15][16][17]

Staff member
The explanations come up quick if you restrict your searches to .mil (add site:.mil to the search terms) 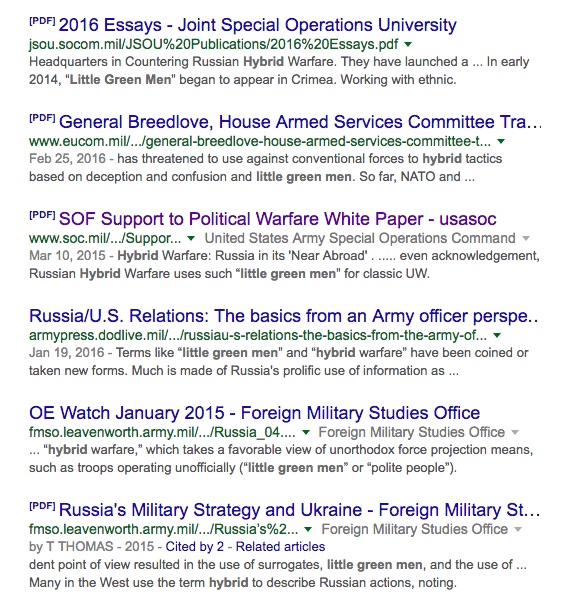 Staff member
I have added explanations to the OP and will re-work it as a debunk rather than a question (changing the post owner to me). Thanks to @helenamatias for bringing this up.
You must log in or register to reply here.

The Sinking of the Moskva