Staff member
A recent "UFO" case turned out to be a plane leaving a contrail. This was initially a little confusing as the footage was shot with a thermal camera which showed the engines of the plane as incredibly dark spots of heat, but also showed the contrail in a similar dark color, which seemed to indicate that the trail was hot. 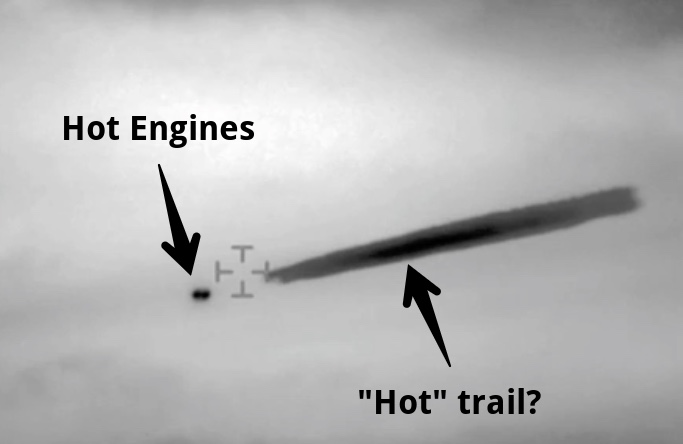 And yet we know from the altitude the plane was flying when the trail formed (26,000 feet) that the temperature was well below freezing. We also know that some contrails can form from the mixing and cooling of superheated jet exhaust with the frigid air, and that this happens within seconds. So even if the plane was spaying something hot, it's impossible for it to stay hot more than a couple of seconds.

So why does it look hot?

The answer is not so much that the trail is hot (it's not, it's well below freezing), it's that blue sky appear incredibly cold in thermal imaging.

I have a FLIR ONE thermal camera, which is limited to -4°F (-20°C) but still can illustrate this. Here's a blue sky with some clouds on a sunny day. The blue sky area (including areas with thin cloud) shows off-the-scale cold of < -4°F whereas the clouds show just above freezing at 33.6°F

Notice how black the clouds are. Thermal cameras, like regular cameras, adjust the exposure to maximize detail in the scene. While the clouds are only just above freezing they show up as "hot"

But in the "UFO" image we have a hot engine, and the trail is of similar color, how can this be? 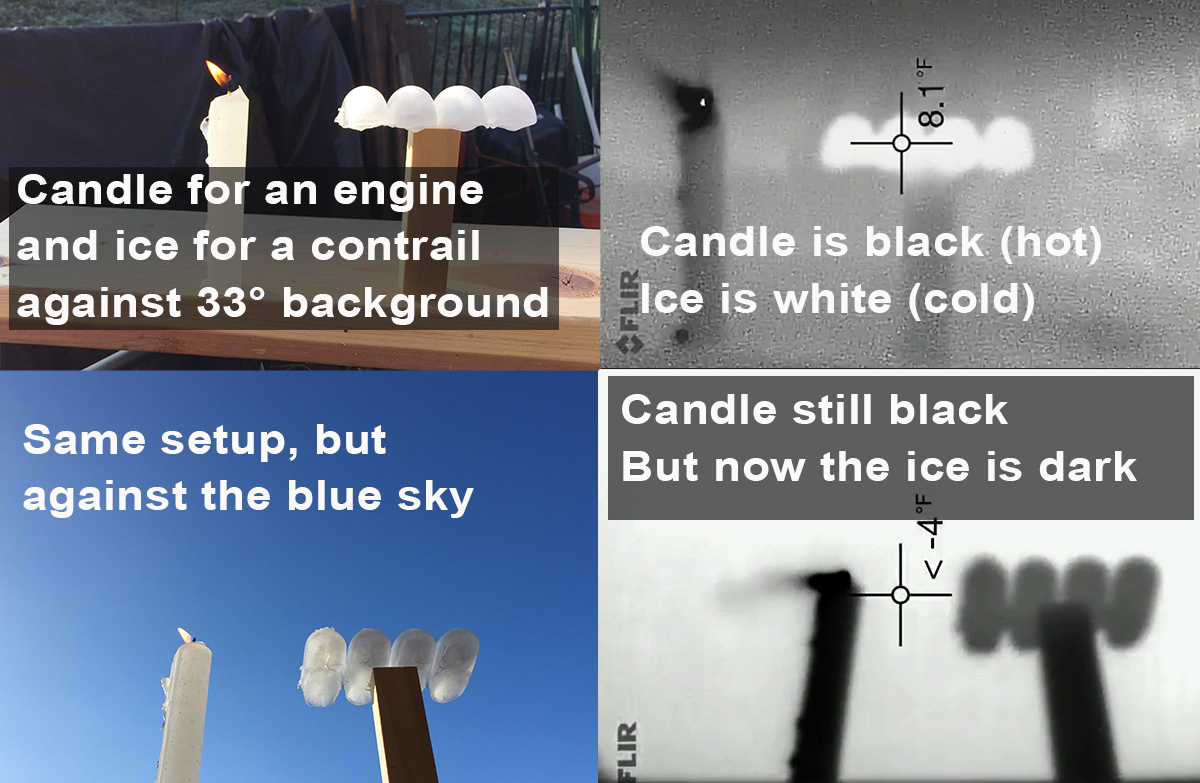 Against a normal background (33°F) the ice appears white, in stark contrast to the black of the candle flame. But against a blue sky background it appears dark grey.

It's still not quite as dark as the candle flame, but that's largely because there are other objects in the scene (the candle itself, and the wooden support) and combined with the relative area of things in the photo this makes the ice seem less "hot".

In the following video you can see the camera adjust, and the "temperature" of the ice trail change.
Source: https://www.youtube.com/watch?v=w6zZ8iEC5GU

The camera used in the UFO video seems even more aggressive in adjusting the exposure. In several places the regular clouds also appear to be the same temperature as the engines. But again it's just the exposure. 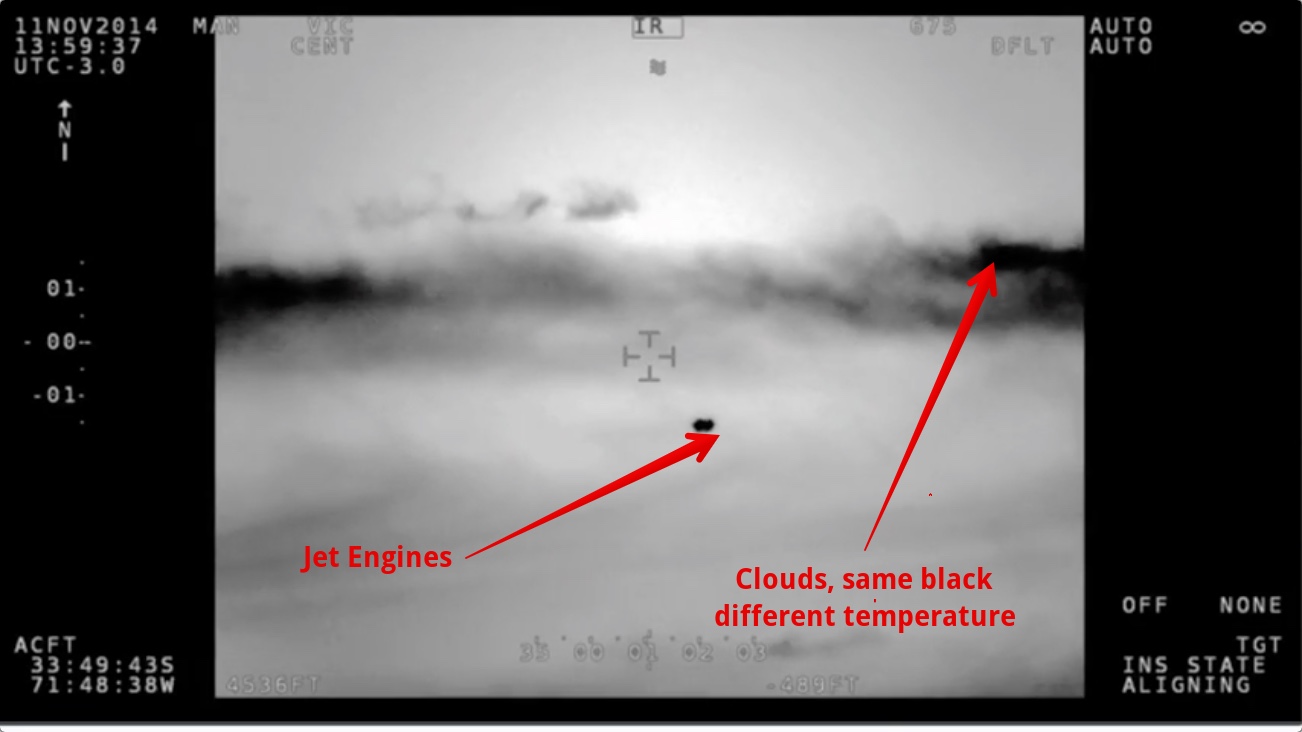 The small size of the heat source (the engine) in the frame here plays a big part in the exposure. Here's another version of the candle/ice experiment, first close up: 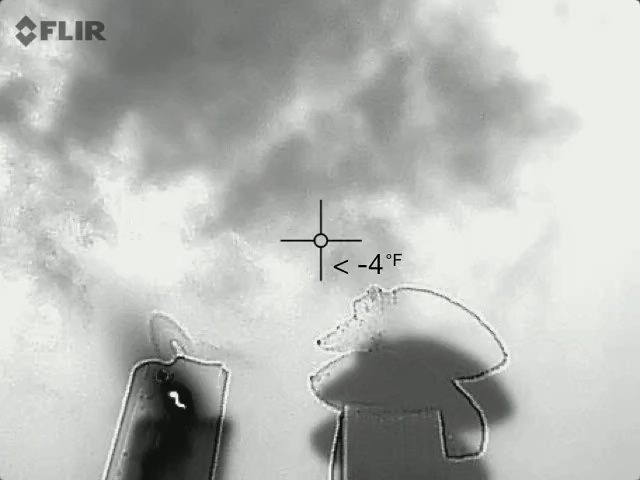 (Ignore the outlines added by the camera, the "shadow" is the actual IR image)

The candle flame is black, but the ice is more grey.

Now we move the camera back, so the flame is a lot smaller. 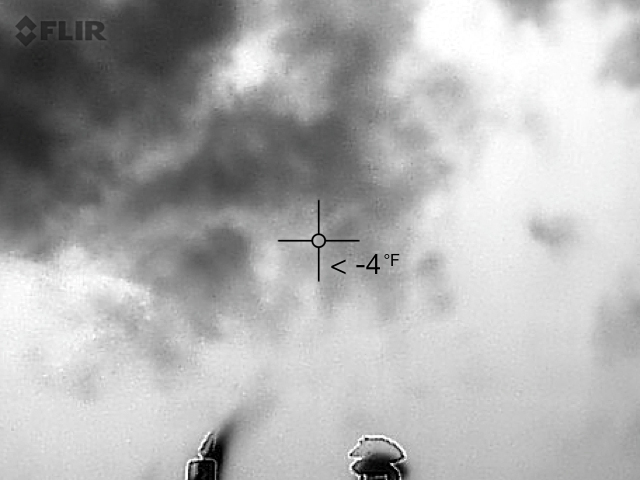 Now the flame and the ice are much more similar, with the ice being almost black (the outline here does not line up with the actual ice, which is the dark blob). Also notice the clouds are a lot darker - simply because the candle is smaller and so counts less towards the average exposure.
Last edited: Jan 14, 2017

Mick West said:
The camera used in the UFO video seems even more aggressive in adjusting the exposure. In several places the regular clouds also appear to be the same temperature as the engines. But again it's just the exposure.
Click to expand...

I actually wanted to make the same point in the Chilean "UFO" thread, but got distracted by the turn of the discussion

Trailspotter said:
I actually wanted to make the same point in the Chilean "UFO" thread, but got distracted by the turn of the discussion
Click to expand...

I've updated the OP in that thread. Cold sky and automatic exposure seems like the clear and simple explanation now.

To complete the explanation you may want to add why blue sky is seen as cold and clouds aren't. Clear air scatters the sunlight at blue wavelengths more than red and infrared (although some infrared wavelengths which are probably ignored by your camera are absorbed by water vapor, CO2, methane, which creates the green house effect), so with the infrared camera you're pretty much looking into cold dark space in "blue sky" conditions. Larger hydrometeors scatter the visible spectrum equally (so they look white when they're scattering the light your way, and darker when excessive scattering blocks out light). But in the infrared small water or ice particles are basically "black", meaning they have little scattering/reflection, high absorption and therefore also high "blackbody radiation" emission dependent on their temperature. The infrared radiances that are emitted by the droplets and caught by the camera are translated into "brightness temperatures" assuming black body radiation.

Two likely explanations that the plane looks the same temperature/color as them is because 1: Its saturated by the camera setting to the maximum visible temperature so the engines cant show up darker than the darkest color 2: most of what is seen from the plane is actually the cold skin of the plane which is closer to the temperature of the air, and not the engines.

Also, when water vapor condenses, it frees "latent heat" (the inverse of cooling from evaporation), but I don't think that matters here. For that it would be interesting to see if the "newer" part of a persistent contrail shows up warmer, before the latent heat is passed on to the air.
Last edited: Jan 14, 2017

Hierophant said:
Two likely explanations that the plane looks the same temperature/color as them is because 1: Its saturated by the camera setting to the maximum visible temperature so the engines cant show up darker than the darkest color 2: most of what is seen from the plane is actually the cold skin of the plane which is closer to the temperature of the air, and not the engines.
Click to expand...

#1 is the answer there. It's obviously the engines based on the shape.
H

Is it not fair to say, you can't read the temperature of something on the released black and white FLIR images at all. It's relative, contrast enhanced and with no temperature readings on it. 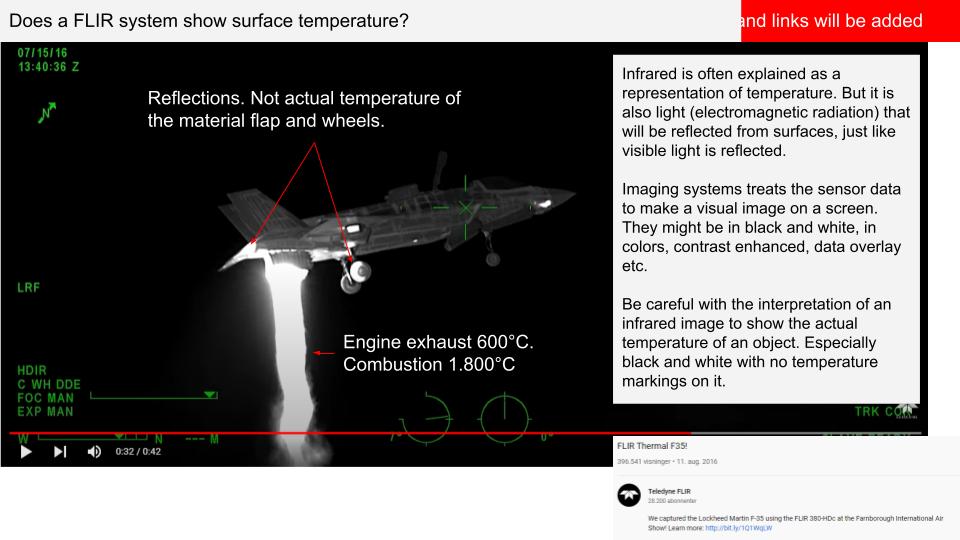 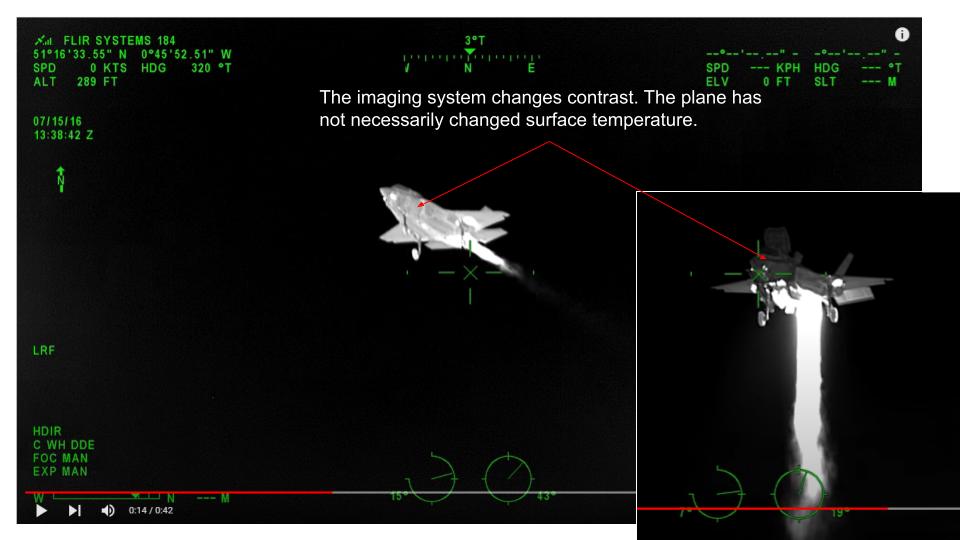 Why the combustion with the high temperature does not melt the engine: (the flame does not touch the combuster casing, liners etc)
Source: https://youtu.be/krjUwyOFA1M?t=450
H

This should debunk any claims of extreme temperature readings on black white IR images.
The actual temperature of different parts of the plane: surfaces of tail, top, bottom, and engine exhaust etc. is completely different. We know the exhaust is very hot and the surface is colder and could even be below freezing in some cases.

Nevertheless the surfaces and engine exhaust is shown as all white.

Normal cruise level of 10 km can easily be in -50°C air temperature, but the frictional heating in Marc 2 could result in +100°C surface temperature or more.

You can’t read any temperature of this image at all. It only shows hot vs cold. Nothing else.

This vides is made with fairly new equipment (2016) made by Teledyne.
https://www.flir.com 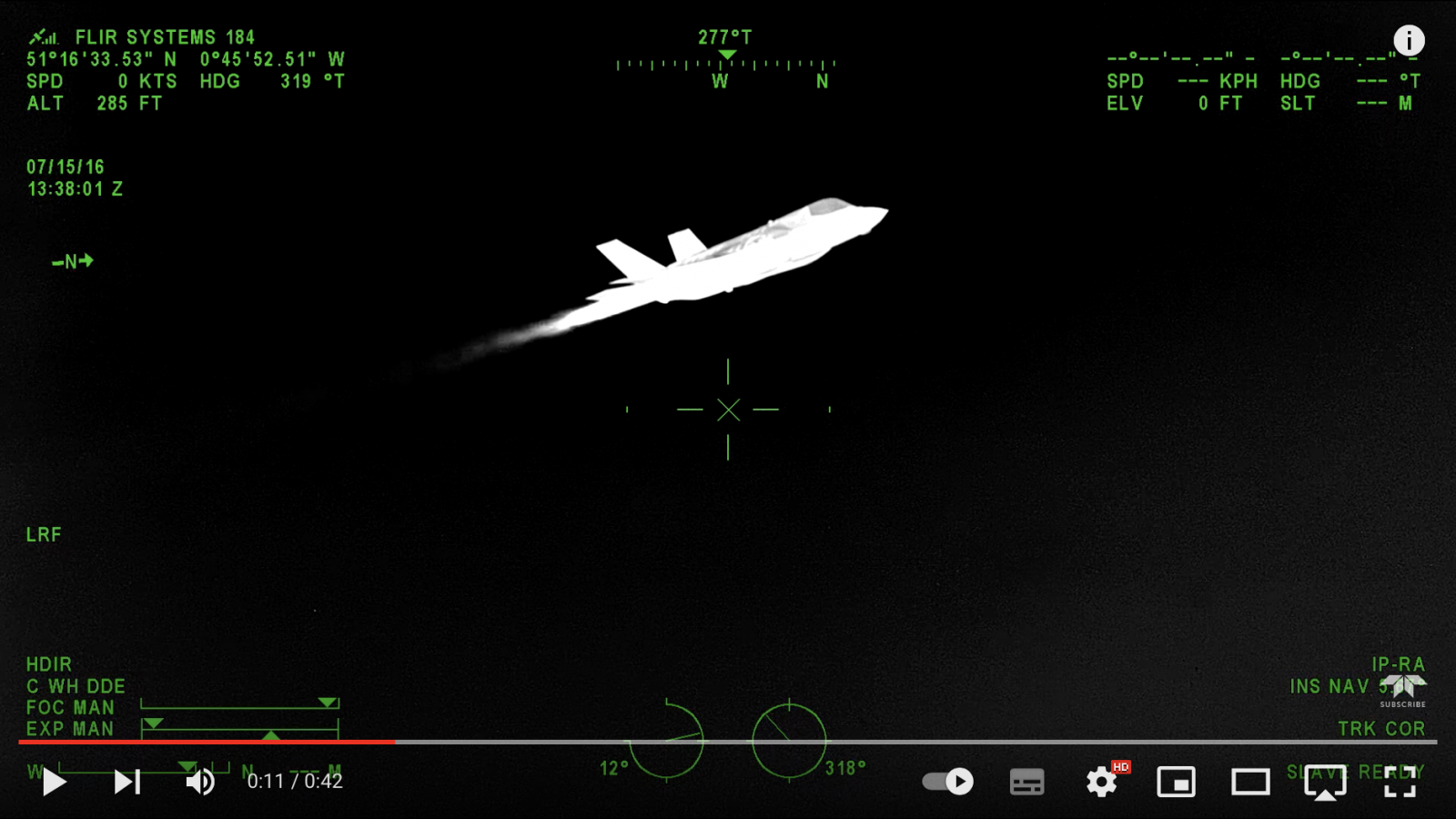