In discussing horizons and visibility with flat earthers, a US Coast Guard geographic range table was brought to my attention. This is a guide for estimating visibility distances over open water.

The full document that this came from here is here on page 7 (https://www.navcen.uscg.gov/pdf/lightLists/LightList V6.pdf) but I have attached the relevant portion below. 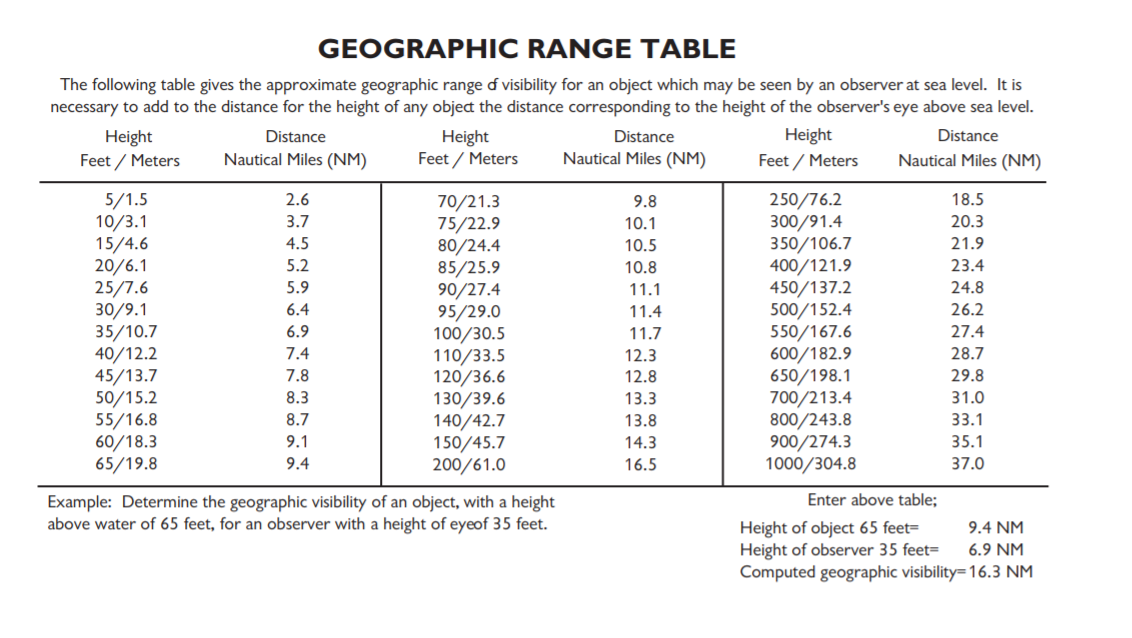 As I read this, one takes the provided nautical miles distance of the observer height and the object height, adds them together, and can get a quick estimate of visibility range.

In the sample example provided above, the observer height is 35 feet, object height is 65 feet, and the computed geographic visibility is 16.3 nautical miles (18.76 regular miles). I plugged in 18.76 miles to the curve calculator, and 88 feet is the amount hidden, a full 23 feet more than the purported object. Does this not contradict generally accepted notions of curvature? Am I missing something?

Bunkmeister said:
In the sample example provided above, the observer height is 35 feet, object height is 65 feet, and the computed geographic visibility is 16.3 nautical miles (18.76 regular miles). I plugged in 18.76 miles to the curve calculator, and 88 feet is the amount hidden, a full 23 feet more than the purported object. Does this not contradict generally accepted notions of curvature? Am I missing something?
Click to expand...

The table shows the practical distance to the horizon including average refraction. The extra value used for average refraction varies a little (as it varies a lot in real life, depending on the weather), but is around 1/7 of the geometric distance. So from 65 feet it's 9.5 NM, and from 35 feet it's 6.5 NM. 1 NM is 1.15 miles, so that's 10.9 miles and 7.5 miles.

Bunkmeister said:
Does this not contradict generally accepted notions of curvature? Am I missing something?
Click to expand...

Perhaps the more relevant issue here is: why does the table describes visibility over a curved surface? What exactly is the point of a Flat Earther bringing up this table if all it says is that the effective radius of the globe (if we ignore refraction) is slightly bigger than expected. Are they just "slightly bigger globe-heads"?

How was this table used in conversation?

It was posted during a debate about whether curved water exists. I was told that this was bombshell information from the government itself contradicting the globe earthers' claims about curvature of the earth.

I just noticed this piece within the last week. Not sure if this is a new meme, but it would not surprise me if you start to see this starting to pop up from flat-earthers more often. It has been posted multiple times on one of the largest flat earth Facebook groups.

Could you give us a few first hand examples?

These tables have been used for hundreds of years, btw.

Brief history of the American Practical Navigator [or Bowditch] from Wiki:

The most popular navigational text of the late 18th century was The New Practical Navigator by John Hamilton Moore of the Royal Navy, first published in 1772. To have exact tables to work from, Bowditch recomputed all of Moore's tables, and rearranged and expanded the work. He contacted the US publisher of the work, Edmund March Blunt, who asked him to correct and revise the third edition on his fifth voyage. The task was so extensive that Bowditch decided to write his own book, and to "put down in the book nothing I can't teach the crew." On that trip, it is said that every man of the crew of 12, including the ship's cook, became competent to take and calculate lunar observations and to plot the correct position of the ship. The New Practical Navigator was published in 1799, followed by a second edition in 1800.

By 1802, when Blunt was ready to publish a third edition, Nathaniel Bowditch and others had corrected so many errors in Moore's work that Blunt decided to publish it as the first edition of a new work, The New American Practical Navigator. The current edition of the American Practical Navigator traces its pedigree to that 1802 edition. Edmund M. Blunt continued to publish the book until 1833; upon his retirement, his sons, Edmund and George, assumed publication. The elder Blunt died in 1862; his son Edmund followed in 1866. The next year, 1867, George Blunt sold the copyright to the government for $25,000. The government has published Bowditch ever since.

These distance of visibility tables aren't the only thing in Bowditch, and not all distance of visibility tables are from Bowditch; I'm just giving you an idea of how long they have been in use. These charts have been used millions of times in association with navigation techniques that only work on a spherical surface. So bringing up this whole subject would seem to be pretty self-defeating for any FE believer. But maybe they're just trying to point out an anomaly. Any anomaly.

In this 1943 US Navy training film - Night Piloting -student navigators are taught to refer to: 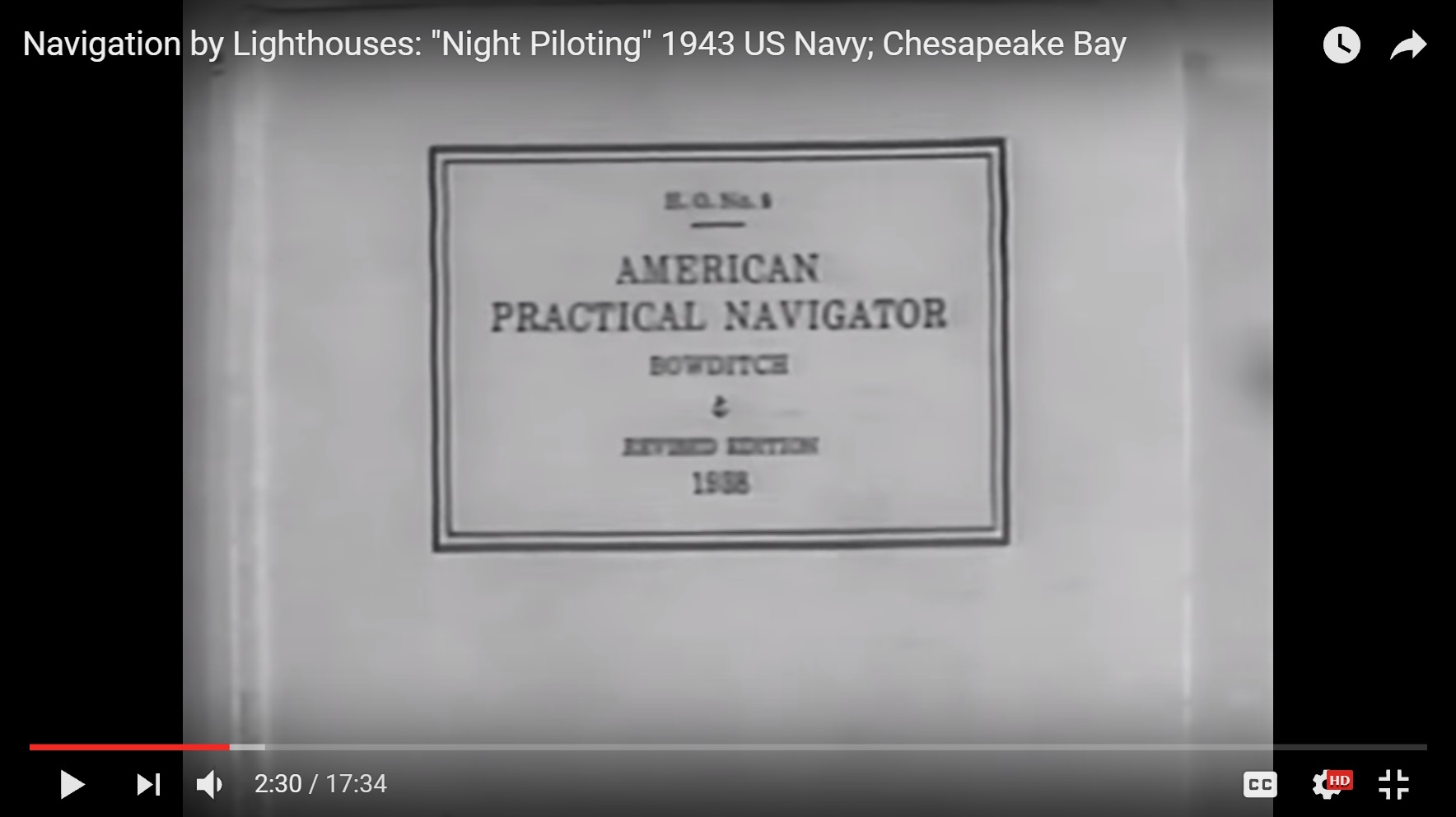 Table 8 - Distance of Visibility of Objects at Sea: 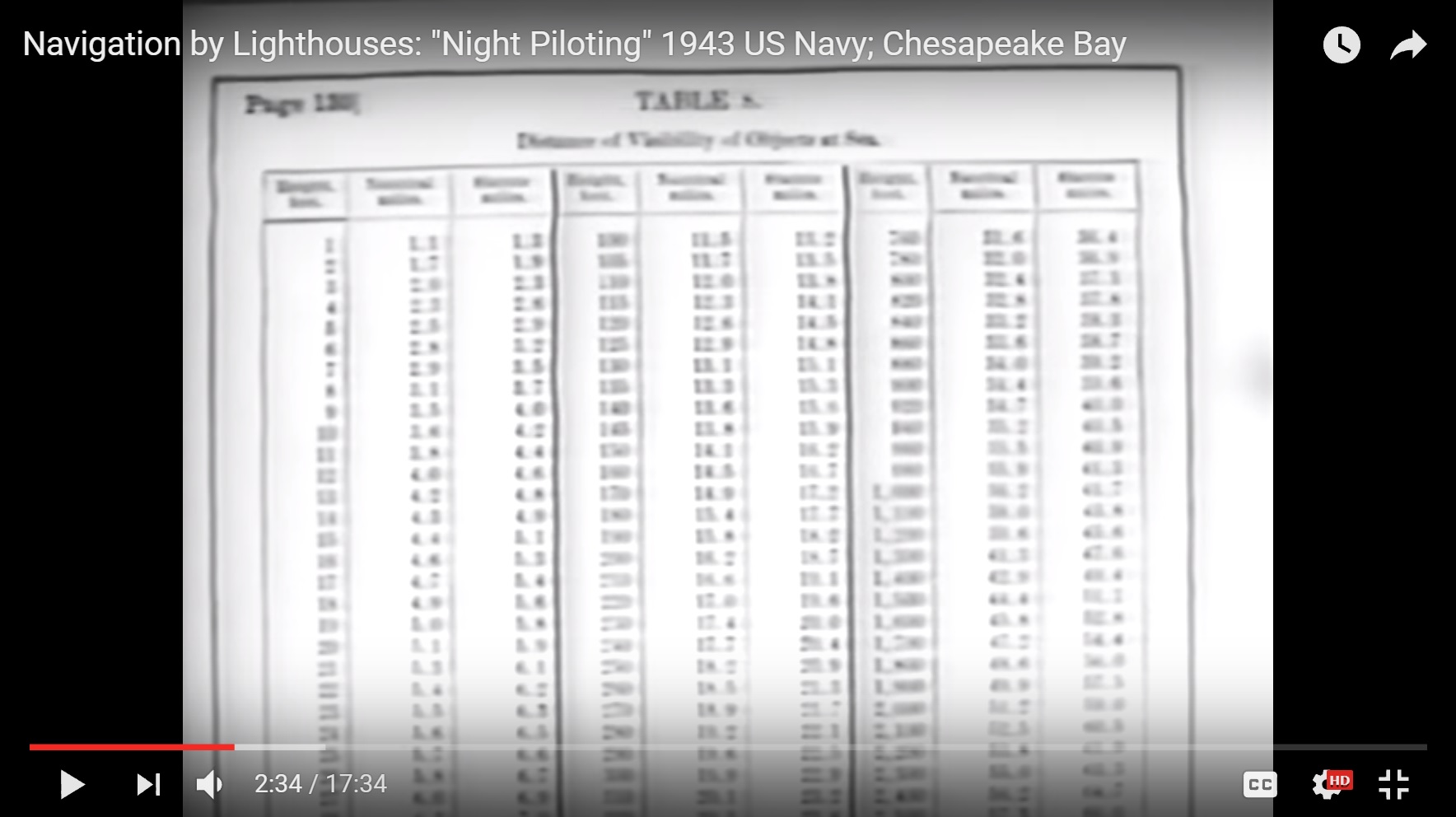 Bobbing the light. One of our members describes practical experience at sea:

Chew said:
There is an ancient mariner navigation technique called "bobbing the light". An officer would go up and down ladders or rigging until a light or navigation mark was just on the horizon. If you know the height of the object and your height of eye you can calculate the distance to the object. I talked several Officers of the Deck into trying this on several of my boats while we were at periscope depth. He would order the boat to slowly go shallower or deeper. The ranges I got were accurate to within a nautical mile.
Click to expand...

An explanation of the technique from: http://boatsafe.com/nauticalknowhow/distance.htm 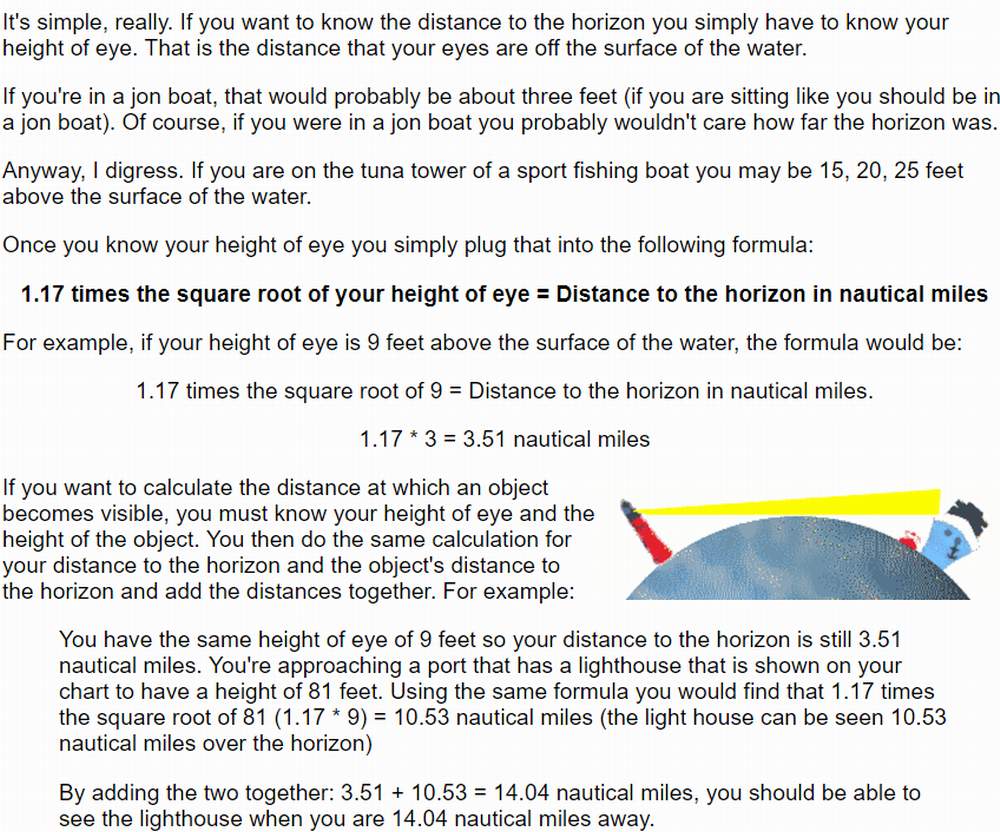 Z.W. Wolf said:
Could you give us a few first hand examples?
Click to expand...

... of the arguments being presented by FE believers. You've given us a second hand account. Can you give us a first hand example? I just want to be sure what it is they are actually arguing.

Is this just one isolated thing you've run across, or are there more?
Last edited: Aug 22, 2017

And do they explain why being higher helps them see further?

Here is a first hand example of a Flat Earther using this chart.

Nathan Oakley promotes this chart as proof of flat earth at the FEIC conference in Denver, in 2018. 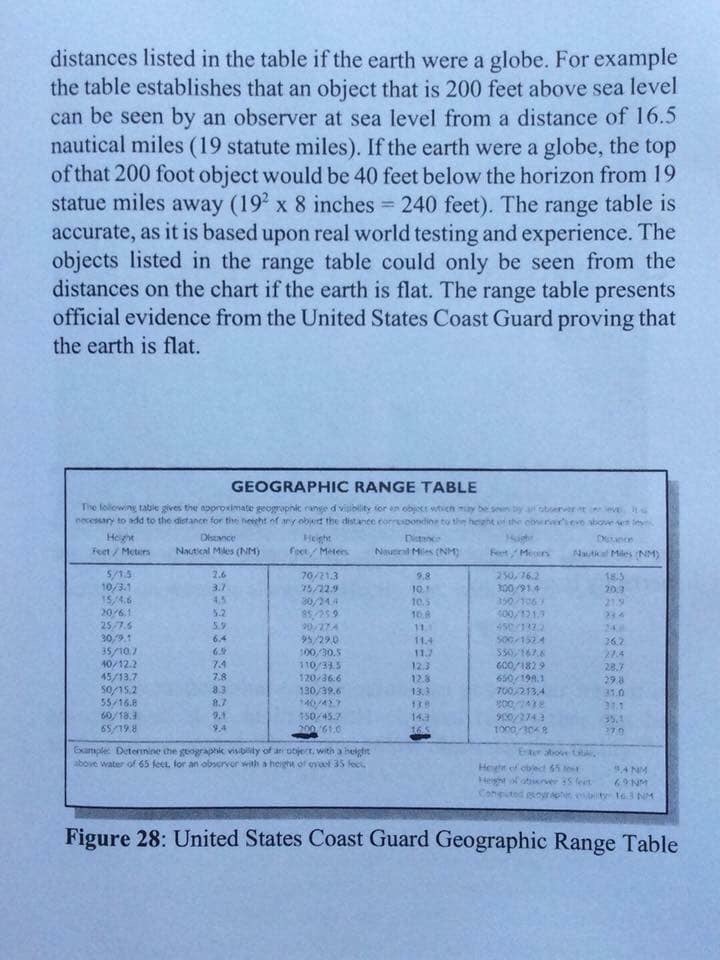 Example of it being used, presumable in some FE book.
M

The table and equation are based on a spherical earth, especially when you look at the derivation of the equation.

The horizon distance (H) on a globe with radius (R) and observer height (X) can be accurately calculated with the right triangle rule. However this isn't easy to work out in your head and it requires both the observer height and radius to use the same units.

The format of this looks pretty similar to the equation posted by Z.W. Wolf. In the expression (2*R + X), we know that R will be much much bigger than X, therefore lets assume X is 0 for this section. We then get...

Since R is a constant, the first half of the equation will not change based on observer height. Now we have an equation that allows us to input the observer height X in ft, and we'll get out the Horizon distance in Nmi and we can do the calculation pretty easily in our head. If we use the 1.17 from the equation posted by Z.W. Wolf, we can calculate the value of R (in ft) used.

Convert this to miles.

The coast guard table is based on a sphere with radius 4786 miles. The standard refraction radius 7/6*R is 4618 miles. So the coast guard either assumes light bends even more than the standard refraction model (approx 1.2 instead of 1.16) or that the earth is bigger than conventionally thought. Either way, it does nothing to prove that the earth is flat.

Staff member
Hah, I wrote this last week but did not hit “post”


Looking into this a little more, given that it's the distance to the horizon, you can use that to calculate the value of R they use. Not perfect as they have only one decimal place. But it turns out if you do a table of distance to horizon for R=1.21*3959 then the results are exactly the same.
Last edited: May 29, 2019

Mick West said:
Example of it being used, presumable in some FE book.
Click to expand...

It's from a book called "The Greatest Lie on Earth: Proof That Our World Is Not a Moving Globe" by Edward Hendrie.

Staff member
Still in use (Jennifer Brown is Nathan Thompson) 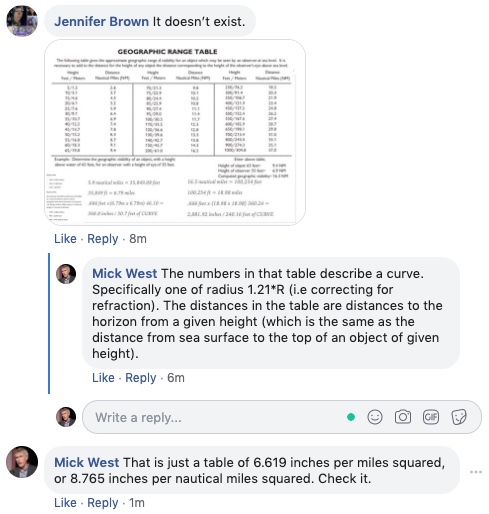 Staff member
Nathan also brought up the table as a globe-busting proof in our debate in Las Vegas (May 26, 2019). He genuinely did not seem to understand what I was saying, as evidenced by him continuing to use it.

Here's a plot of the values. The horizontal axis is Nautical Miles, vertical is height, which is essentially the same as "drop". 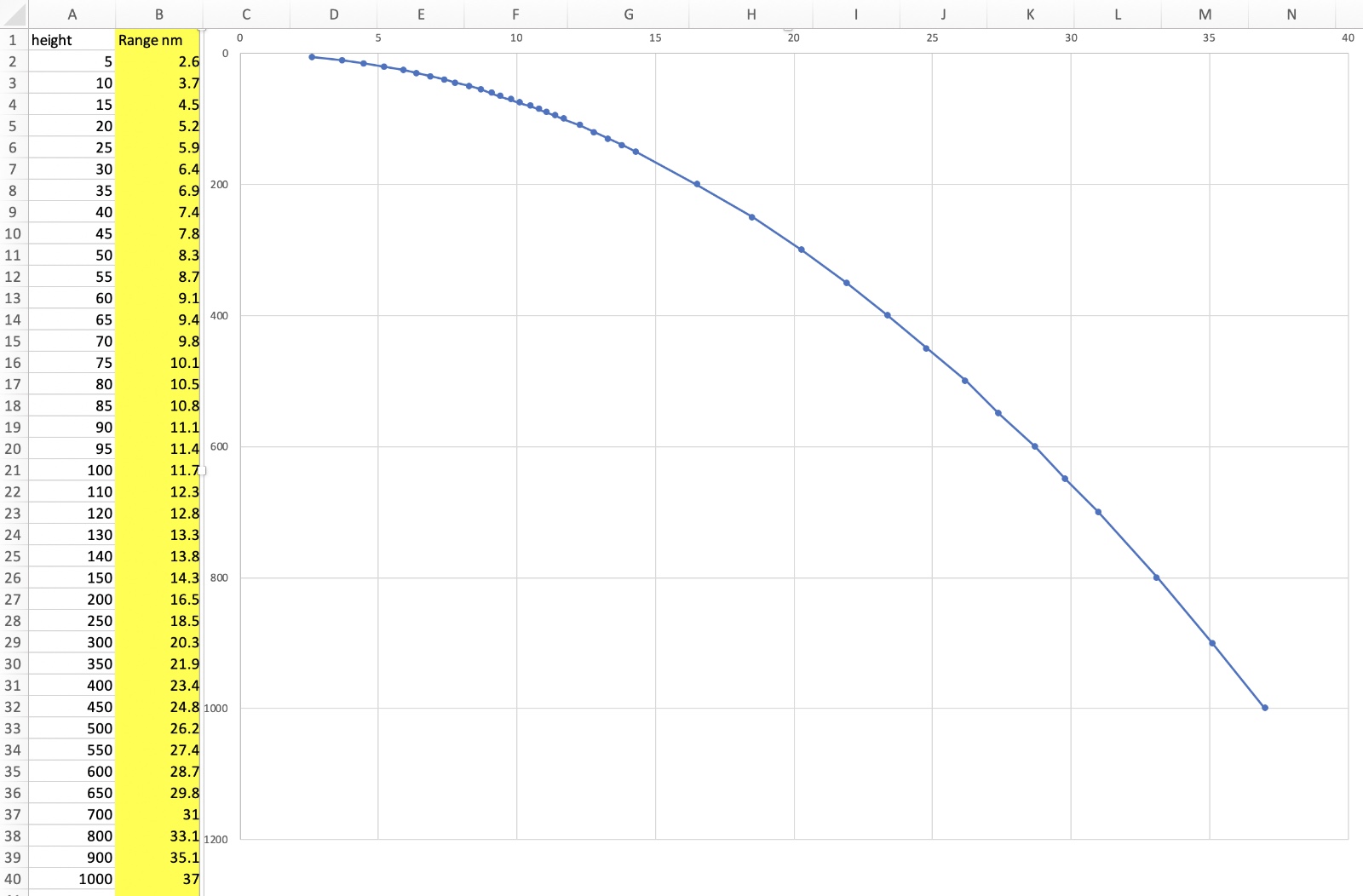