Breaking: Active Shooter at Andrews Airforce Base. What may be of interest for the CT side of things--they had scheduled a drill for active shooter the same day (?) and found there was an actual shooter. (CTs like to claim that drills before=fake/crisis acting) 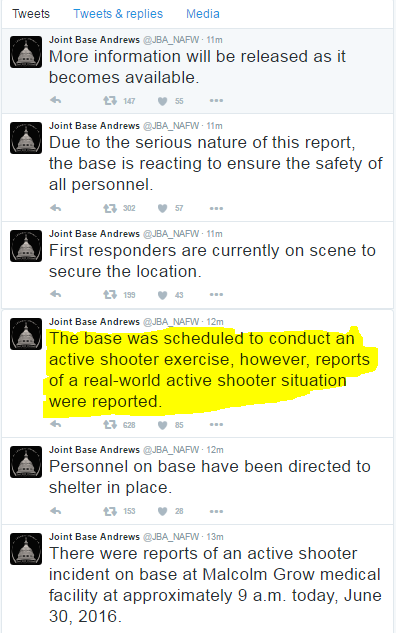 
.....
Someone on the third floor of the medical facility saw two people walking across the base with long guns. The person didn't know there was a drill planned and called in the active shooter report, law enforcement officials told NBC News' Pete Williams.

Sounds like someone didn't get the memo about the drill.
Last edited by a moderator: Jun 30, 2016

Clearly the whole incident was staged to give the impression that drills on the same day are not absolute proof of a conspiracy.

Freak said:
Clearly the whole incident was staged to give the impression that drills on the same day are not absolute proof of a conspiracy.
Click to expand...

I had the same thought. All CT roads truly do lead to Rome.
You must log in or register to reply here.