Youtube user 'The Bloody Truth' is a flat earther who posts 'proof' and 'globe debunking' videos. In marked contrast to most flat earthers, he invites challenges, sometimes admits when he's wrong, and apologises for using insults - plus goes against well-established flat earthers when the evidence convinces. He even debunked a D. Marble 'proof' that he had previously agreed was a 'globe killer'.

His latest video is another 'globe killer' showing how a video of the full moon and sun in the Dublin sky at the same time would be 'impossible on a spherical earth'. He has made a scale computer graphic to back this up: 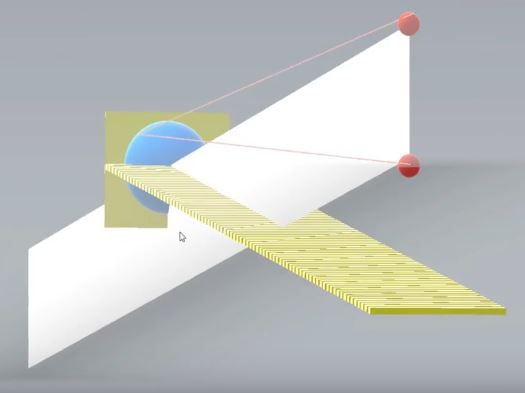 The top red ball is the moon on the ecliptic plane - ie, where it would be during a lunar eclipse - and the bottom red ball is where he estimates it was in the Dublin video. The yellow 'plank' is the 5.14° angle of lunar inclination, and the yellow square represents the terminator.

There are two reasons he believes this represents an impossibility on a globe: 1. There's no direct line between any place the moon could have been and Dublin (ie, Dublin is on the sunny side of the terminator); and 2. When he draws in the Tropics of Cancer and Capricorn - the purple lines in the diagram below - most of the moon's possible positions extends beyond these: 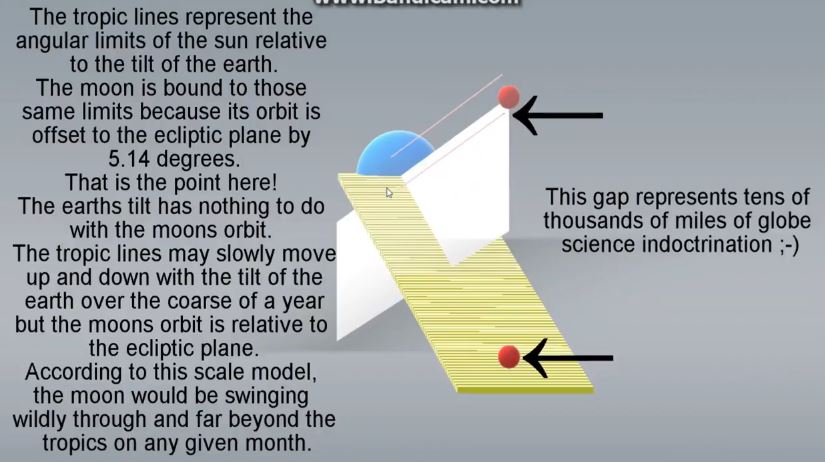 The second claim is of course comically easy to debunk: he's drawn his tropics parallel to the ecliptic plane, rather than parallel to the equator, even though he shows the 23.4° axial tilt elsewhere in his video.

The first claim, meanwhile, is because he hasn't taken into account atmospheric refraction, which allows us to see both the sun and the moon when they are physically located beyond the horizon, as show in this video:

What's most interesting about his video to me is what it demonstrates about flat earth thinking. Throughout his commentary he disparages science and NASA, sighs at their stupidity, and fully believes that he has successfully challenged the work and understanding of millions of people over thousands of years:

"The ball earth and the horseshit called science that goes with it does not match our reality [ie, my model]. Science, huh? Woohoo. The moon never strays beyond the tropics. This is a law of nature and is supposed to be backed up by the ball earth science. But apparently no one took the time to scale it out and check that it apparently works. I guess the NASA scientists are just as lazy as their video editing department is. If they did take the time then they would have caught this problem and made another correction to the lie. I mean, seriously, shouldn't all the geometry, when scaled out, match reality?

Content from external source
It's not massively different to the kinds of things other flat earthers might say - but interesting in that he is one of the few who has something of an awarenes of having been wrong about these things before, and therefore might be expected to possess a little caution and humility in leaping to such conclusions. Yet there's not of that: this latest 'proof' is presented with apparently utmost conviction.

The comments, meanwhile, reveal the usual instant support and congratulations of flat earthers - "Another 100% globe killer!" - "Awesome work, just perfect!" - (as his now self-debunked previous 'proof' received, and presumably still does), while those who point out the flaws in his model are aggressively dismissed - so not quite as open to "challenges" as claimed.

This I find strange, as this particular error isn't something that can be debated with perception or perspective, but is due to the simple fact that he has drawn the tropics in the wrong place. That his viewers don't check the model is one thing; but that someone with some obvious smarts, who knows he's been wrong before, can display such enormous confidence in his abilities as to believe he's overturned established science, while resisting those who point out the elementary flaws in his model, is something altogether different.

I shall leave it to someone else to reference the famous study and effect.
Last edited: Nov 23, 2017
R

Retman said:
What would the moon's path around the orbiting earth look like from a perspective above the orbiting plane?
Click to expand...

The moon's path is an ellipse, but of low eccentricity so it looks roughly circular. From above the orbiting plane and viewpoint fixed above the CoG of the Earth it looks like this: 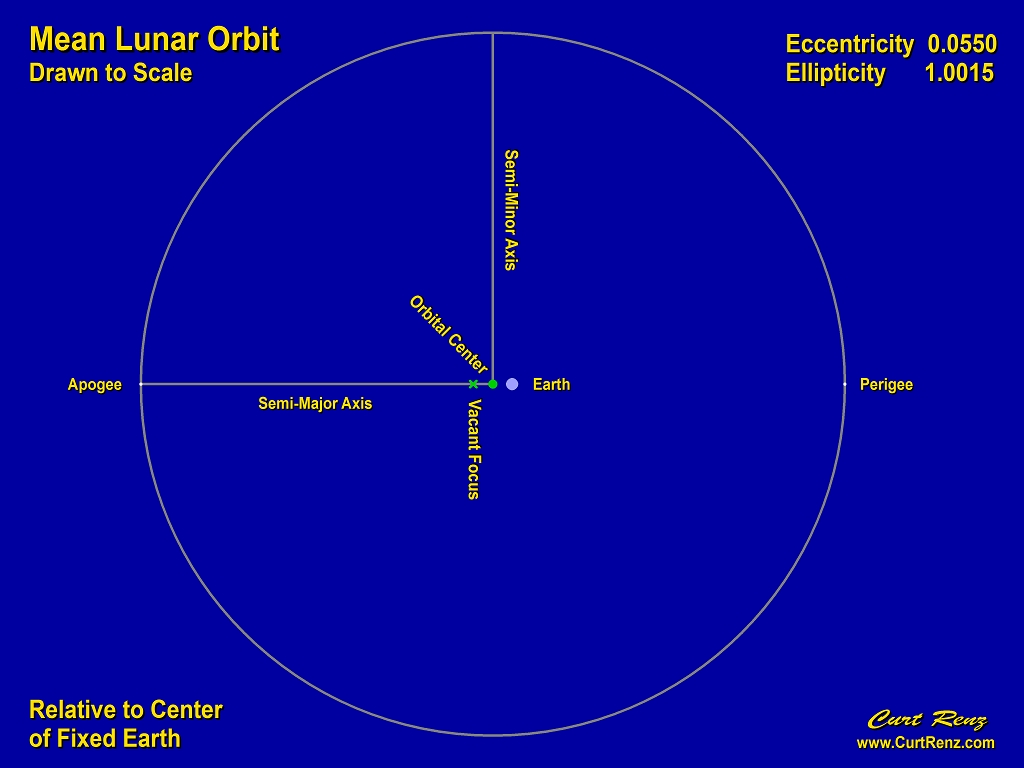 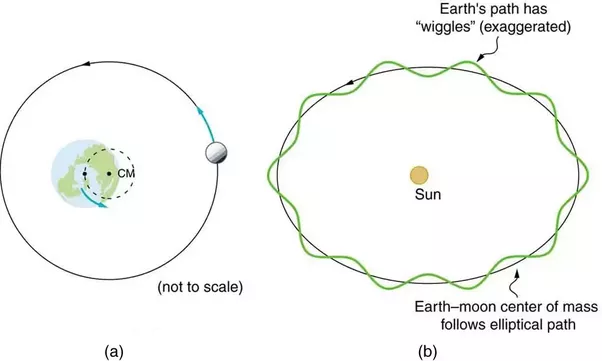 Depends on your frame of reference. If we ignore the elliptical variations in orbit then it's orbiting the earth at a fixed speed, and the center of gravity of the Earth and Moon together orbit the sun at a fixed speed. If you look at the position of the moon relative to the sun then it will seem to have variations in velocity. It's all relative.

However it's not speeding up and slowing down like a car accelerating and braking.

Content from external source
That whole thread is pretty fascinating. Here's their animation of the moon's orbit around the sun:

Rory said:
That whole thread is pretty fascinating. Here's their animation of the moon's orbit around the sun:

The Earth actually follows a similar, but much less wiggly path. It's the barycenter of the Earth/Moon system that orbits the sun. The Earth and the Moon then orbit the Barycenter. The barycenter is inside the Earth, so that just translates to a bit a very minor wave in the orbit. 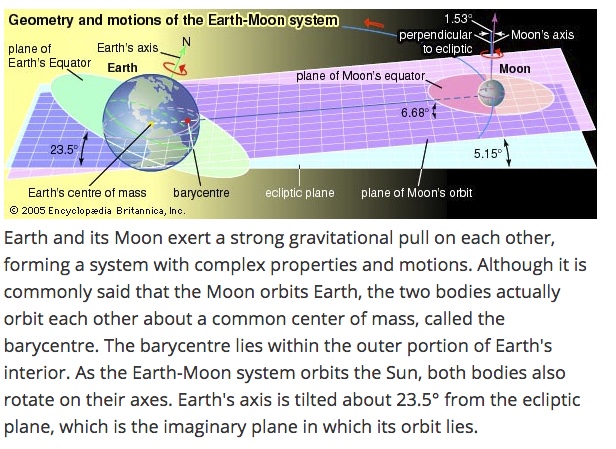 You can see why people get confused. I know I do.
R

Mick West said:
Depends on your frame of reference. If we ignore the elliptical variations in orbit then it's orbiting the earth at a fixed speed, and the center of gravity of the Earth and Moon together orbit the sun at a fixed speed. If you look at the position of the moon relative to the sun then it will seem to have variations in velocity. It's all relative.

However it's not speeding up and slowing down like a car accelerating and braking.
Click to expand...

They showed the path of the solar eclipse of August 2017 going from Idaho to Carolina on a stationary United States. Shouldn't they have had the map rotating? Faster than the moving shadow thereby in effect going west relative to the surface which is how we see the moons movement.

I really don't have any difficulty in visualising someone ON the terminator, having a sightline to both Sun and Moon ...

Take a look at this thread. There's a GIF that shows a model earth in motion.

I just built this model myself in Maya.
Sphere + earth texture timeanddate (timeanddate data from may 10 2017)
23.44 tilt
Duplicated the sphere, scaled it down by a factor of 0.25 to get the moon (.25 x 4 = 1).
Duplicated the Earth 30 times to get the earth-moon distance in there.
Made sure the moon's plane was 5.14 degrees off set from the ecliptic (not the equatorial) and rotated above where timeanddate said it should be (matched up nicely). 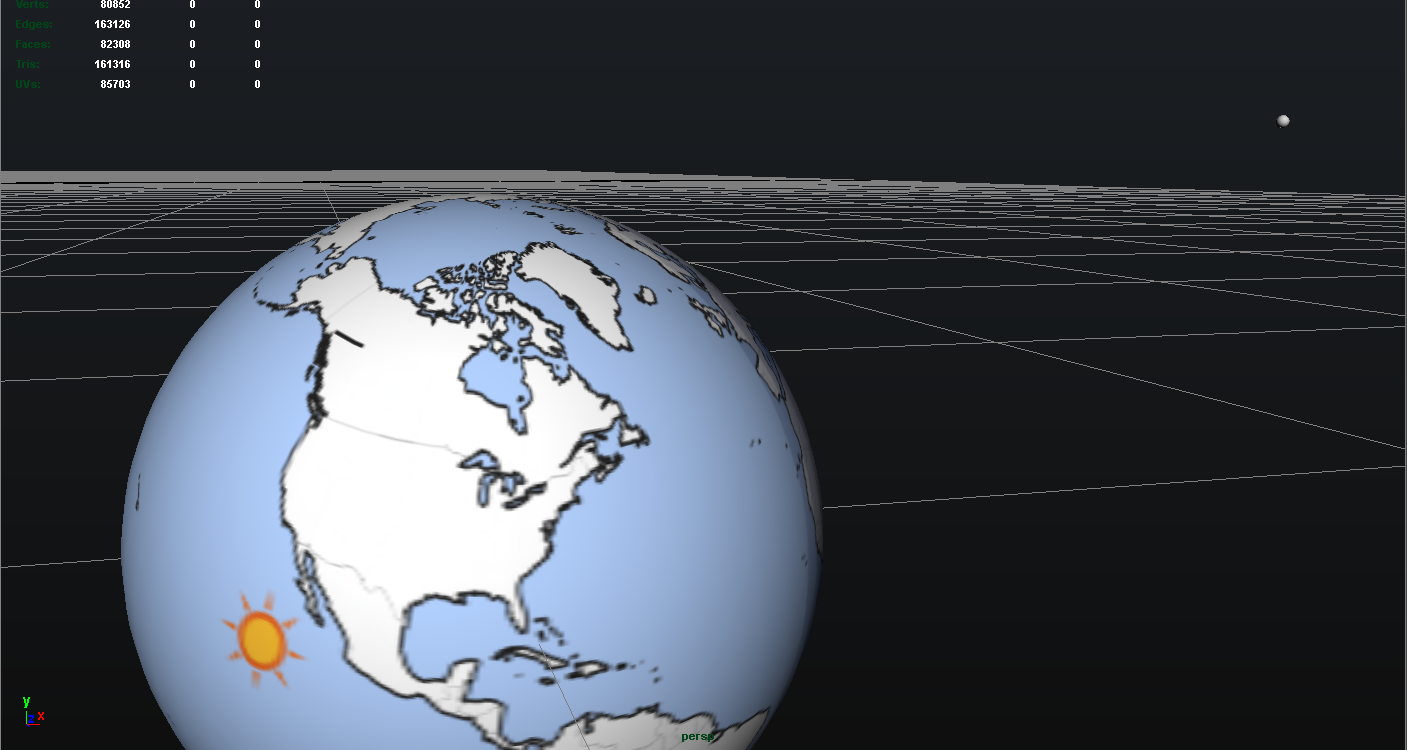 Lowered the camera to around Dublin aaaaaand: 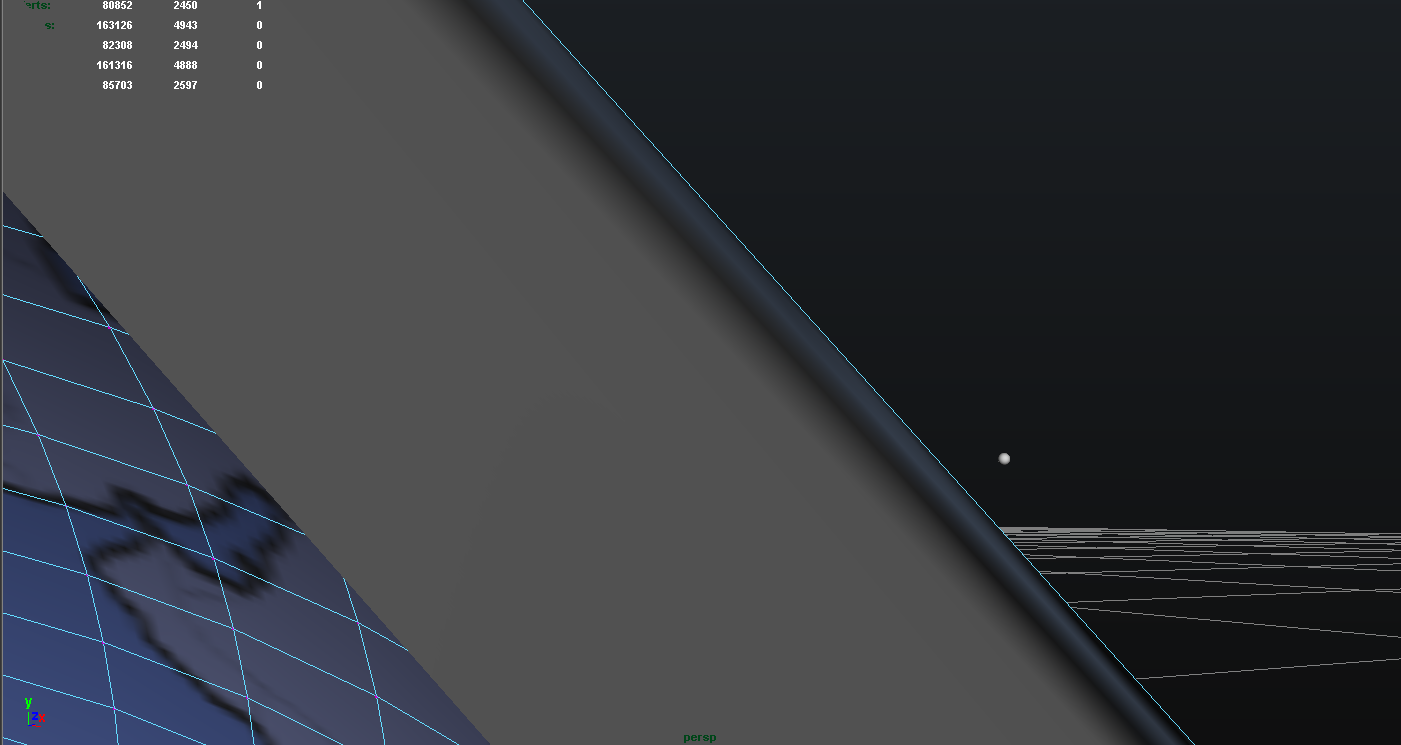 ConfusedHominid said:
Lowered the camera to around Dublin
Click to expand...

What's the altitude of the camera?

Rory said:
What's the altitude of the camera?
Click to expand...

I'll check it now but it's pretty much clipping the terrain of Dublin as you can see. Those blue lines in the bottom left corner is the wireframe of the other side of the globe.

Okay, so I've checked again and I hadn't saved my camera. So I had to redo that part. The following image is dead center, as in pretty much 0 feet and 0 inches above the terrain:

Note, the focal length (100) was for zooming in. Also, my globe is using a limited number of polygons, so it appears slightly more blocky than I'd like personally. This will inevitably raise the terrain of each edge of a sphere a bit more than it would be if it was a perfect sphere of greater detail.

So yes, there would've been indeed some refraction going on to raise the apparent altitude of the moon.

I plugged in the time, date, and location into Stary Night Pro back when a video came out showing the full moon and sun above the horizon from Dublin.


The ecliptic is shown, with the moon about four degrees above it.

Related Articles
View of Snowdonia From Dublin - Mirage?
Alien structure near Zeeman Crater on Moon?
Red Triangle on face of the moon
Explained: Student in Teignmouth, Devon sees UFO [Moon Obscured by Clouds]
Slow, Splitting UFO - Wilminton, CA - Moon Through Clouds?
Solved: "Double Moon", Dubai, UAE. [Projection]
Strange lights on picture of the moon during "Blood Moon" [Stuck Pixels]
Moon moving "faster" than clouds
Claim: Apollo 15-17 Live TV Feed - Antenna signal would be interrupted from all the violent shaking when Astronauts touch the buggy
[Fake] UFO's Casting Shadows On The Moon - "OVNI sur la Lune , 2020-03-26"
Light Fall Off in Apollo Missions - American Moon Documentary
Debunked: NASA tampered with the original television audio of the Apollo 11 moon landing
Debunked : Fake Set Moon Landing with TV Camera and Stairs
Debunked: Wikileaks releases unused footage of moon landing (Capricorn One movie scenes)
Recording ISS Transits of the Sun and Moon
Claim: Australia was not visible from the moon for Apollo 11 Broadcasts
Claim: Moon Passing The Meridian Disproves Globe Earth
Debunked: The Lunar Cycle affects birth rates
Debunked: Study shows link between menstrual cycle and the moon
Identifying Sun and Moon Transits
Multiple UFOs Fly Across Moon- Birds?
Explained: Mysterious Red Planet Like Object Filmed Next To The Moon. Atglen [Reflection]
"Mars will be as big as the Moon" no, it won't.
WHAT IS THIS LINE? (on my Super Blue Blood Moon Photo) - Smarter Every Day 188
Plane Flies in Front of Super Blue Blood Moon Eclipse
Apollo 17: alleged inconsistency of shadows
Some proof The Moon is not it's Own Light Source
[Debunked] Apollo 14 Flag Waving Before Ascent?
6 Giant Towers discovered on the Moon [Digital Artifacts/Glitches]
Explained: Moon Terminator/Shadow UFOs
Measuring the distance to the moon with laser reflections and the speed of light
The Moon Tilt & Terminator Illusions
Explained: Apollo 17 Photo of Earth from Moon Seems too High
Interesting observation of moon light phenomena i can't find the answer to ????
Contrail on Moon Disc?
Explained: Why Clouds Appear Behind the Sun and Moon
Needs debunking: Video of a solar eclipse is fake because we cannot see the moon covering the sun
Debunked: Chang'e-2 photos of Alien Base on Moon [Hoax]
Madisonstar Moon posts 59 year old photo of B47's contrailing.
Debunked: UFO in NASA live feed [The Moon]
Moon anomalies
Aulis article uses NASA documents to cast doubt on the reality of Apollo
Very good question asked by Madison Star Moon
Bunk: SyFy: Aliens on the Moon
A pyramid on the Moon
Solved: "Alien" with "shadow" on the Moon [Debris in Camera]
Rectangular building type objects on the surface of the moon [Like the Triangle]
Another Google Moon Anomaly
What is this on Google Moon?
Moon Stuff: Stereoscopic examination of Photos
Share:
Facebook Twitter Reddit Pinterest Tumblr WhatsApp Email Share Link