I received a DM from a UFOlogist, @realityseaker on Twitter, who had done some work on the Gimbal video and found something. Everyone focuses on the "flop," where the object/glare (hereafter the "blob") suddenly swivels dramatically — but his analysis suggests that the video's first 24 seconds are actually more telling. With his permission, I am looking for commentary. 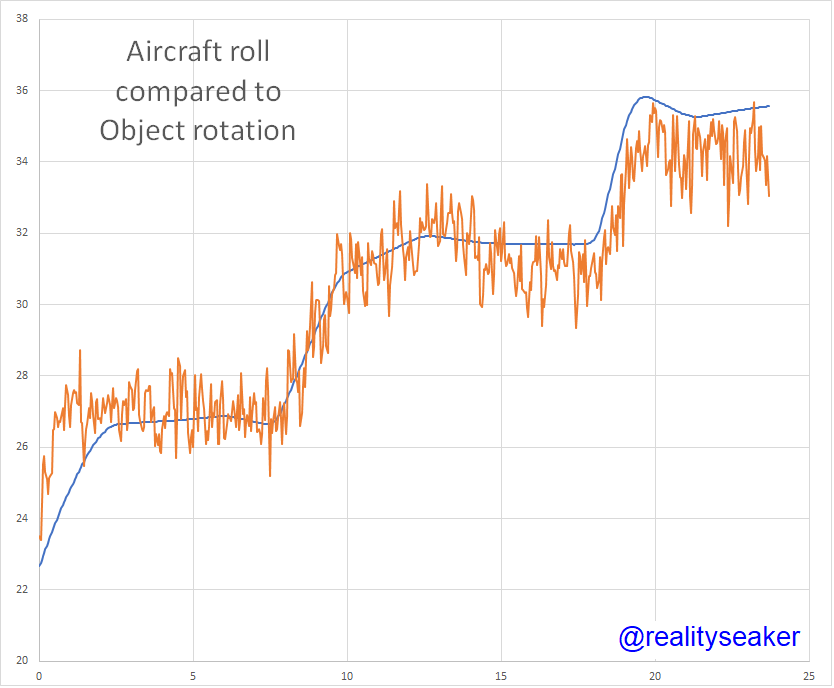 To make this more visually intuitive, I overlaid a constant angle on his video, and then roughly animated it to show how the blob and aircraft roll more or less at the same times and amounts: once around 0:01, again around 0:09, and again at 0:19:


Discussion: This correlation may have escaped notice previously because, up until the "flop," the ATFLIR's de-rotation mechanism keeps the blob from rotating in the original video, even as the jet rolls. But of course, the aircraft icon in the middle of the horizon indicator also doesn't rotate in the original. They both remain equally stable, even as the horizon-indicator bars (and the real horizon) tilt. The blob and aircraft are moving together.

Of course, the correlation goes to hell as the ATFLIR approaches 0° (starting around 14° L), when the outer and inner gimbals begin to behave/interact chaotically. Prior to that, though — and neglecting coincidence or a fantastical ad hoc hypothesis — does the correlation prove beyond any reasonable doubt that the rotation of the Gimbal blob is a locally caused phenomenon?
Last edited: Oct 13, 2021

Yes, as do the small camera bumps each time one of these rotations occurs.

Since there is a mechanism that tilts the image on the display according to the bank angle (possibly a CV joint), it should be analyzed if the clouds also undergo this rotation.
Last edited: Oct 14, 2021

Perhaps this is one of the reasons why Gimbal is so compelling: the blob never moves while the clouds are moving, slowing down, and tilting. I think the clip would actually be less compelling if the blob rotated along with the clouds and horizon indicator — that's what we might intuitively expect if the object were actually shaped like that. Since it doesn't, it creates a subliminal impression that the blob is "following" us, like a creepy portrait painting. It's even slightly eye-shaped.
I

Also note how the object not only 'flops' but it slows down during its 'flop'.

That's a very interesting stitch. While we've all been analyzing the bank angle (with very mixed results), perhaps this could yield a much more accurate recreation of the jet's flight path, and from there, bearing lines that can give us a better idea of the distance to the object.

To see what this version can tell us, I tracked the velocity of the object across the frame. I did this manually, as there are too many missing/duplicated frames to get a smooth curve with an auto-track. I tried to keep a vertical bar centered on the object over any given window of 5 or so frames, nudging it in half-pixel increments where necessary. Here'a clip:

Here's what the velocity graph looks like over the course of the whole video: 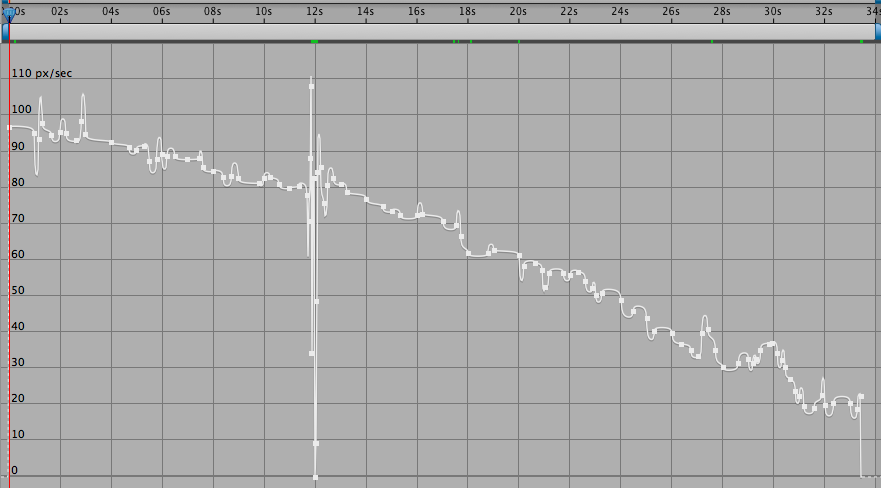 Eyeballing it, the rate-of-turn generally increases over the 34 seconds, but with no significant rate-of-turn changes at 0:01, 0:09, and 0:19 that we assume from the sudden changes in the bank angle at those times.

I do think the horizon indicator accurately reflects the aircraft's roll (if only because the roll is closely reflected by the rotation of the glare); it's just that the aircraft's physical turn seems to be much smoother than we've been expecting.
Last edited: Oct 23, 2021
I

I have a bigger problem looking at the stitch: both the object and the banking jet seem to remain at a constant altitude. The object does not change altitude with respect to the clouds and the displayed altitude of the jet is constant as well.

It would be more logical if the angles displayed on the ATFLIR screen are relative to the horizon. But in that case the ATFLIR should rotate constantly and hence the object should as well if the glare hypothesis is true...

When I was first trying to wrap my head around these LOS angles, I poked a nail through an envelope and imagined that the envelope was a jet and the nail was the ATFLIR, pointing at a distant object while the jet moved around.

According to the sims

Eyeballing it, the rate-of-turn generally increases over the 34 seconds, but with no significant rate-of-turn changes at 0:01, 0:09, and 0:19 that we assume from the sudden changes in the bank angle at those times.

I do think the horizon indicator accurately reflects the aircraft's roll (if only because the roll is closely reflected by the rotation of the glare); it's just that the aircraft's physical turn seems to be much smoother than we've been expecting.
Click to expand...

Your plot basically shows the relative velocity of the object w.r.t. the clouds, as seen from the ATFLIR perspective, while the jet is in a constant banking turn and the ATFLIR is locked on to the object. I don't know how you can deduce from that graph that the rate of turn of the jet increases?

The graph does show the relative velocity of the object w.r.t. the clouds gradually decreases. Eventually it drops to 0 when the object tilts. That's pretty strange, but it happens. The object simply seems to pull to a stop, with the jet still in a banking turn. The ATFLIR gimbal roll at the very end is also clearly visible, it is accompanied by a sudden small shift of the ATFLIR field of view, just like in the FLIR1 video.

Both the jet and the object seem pretty stable in terms of their angle, but they do not remain completely aligned. The angle between the blue lines is the same in the two snapshots below. Yet, the object's angle has slightly changed with respect to the jet indicator in the second screenshot, as indicated by the green line. You can also see the horizon indicator is is not very reliable when the ATFLIR LOS is at a large angle with respect to the jet (the first screenshot below): 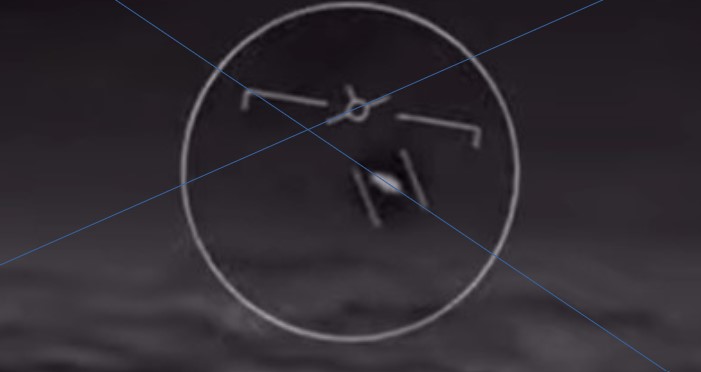 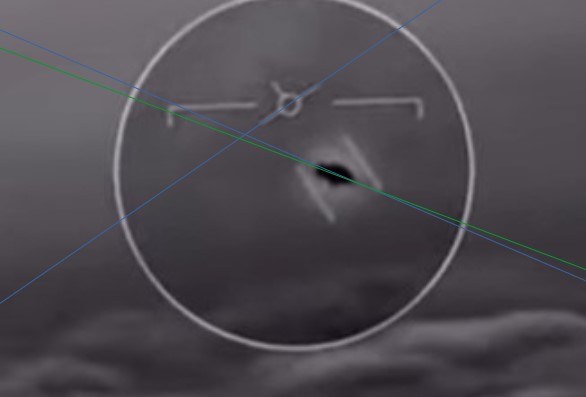 According to Ryan Graves, the Gimbal object did come to a full stop before reversing direction, like we see happening in the stitched video above:

Itsme said:
Your plot basically shows the relative velocity of the object w.r.t. the clouds, as seen from the ATFLIR perspective...
Click to expand...

I think you are noting/acknowledging in passing here that parallax likely plays some part in that apparent velocity as seen from the plane's POV. If that's what you meant, I agree. If that's not what you meant, then I'll horn in and point out that it is almost certainly the case.
I

JMartJr said:
I think you are noting/acknowledging in passing here that parallax likely plays some part in that apparent velocity as seen from the plane's POV. If that's what you meant, I agree. If that's not what you meant, then I'll horn in and point out that it is almost certainly the case.
Click to expand...

Sure, parallax is all we have. Mick did a great analysis on that, see video below, and showed that a stationary UFO would lead to a stationary background at the end of the jet's flight path. The sweep of the end of the pink line in his video (pink line = ATFLIR LOS) basically shows how the cloud background would move (ignoring any movement of the clouds themselves).

But if the UFO would be stationary the whole time, like Mick assumes in that video, we should not see any difference in background movement from 0:23 onwards, since the ATFLIR LOS is static from that moment on. Yet in the Gimbal video we do see the background still moves, and this movement gradually slowing down to 0, from 0:23 onwards (the speed of the background in the Gimbal video decreases according to the graph made by Edward Current). To see this same background movement in the ATFLIR LOS of Mick's video, the object could be moving from top-right to bottom-left and gradually come to a full stop, like the pilots reported.

Maybe it's possible to construct a flight path of the object that yields the graph made by Edward Current, and see what this means for the object's trajectory?

Related Articles
How much research does a truther have to do to get any respect around here?
What exactly does “Explained:” mean in a thread title?
Does this video footage show a dragon (sea serpent) attacking a manatee? [No]
Does Benford's Law apply to Elections?
What does "genuine UFO" mean in the Condon Committee report
Needs Debunking: That the GPS does not implement time corrections from Einstein's relativity
What does "Off-World" mean to the US Military?
Why Does the Sun Rise and Set In a Straight Line?
WTC7: Does This "Look Like" a Controlled Implosion?
Does google earth pro simulate refraction [No]
Does the inverse-square law apply to the flat-earth debunking tool chest?
Explained: Why the Earth does not look oblate in photos from space
Why Does the Atmosphere Not Fly off into the Vacuum of Space?
What does the Flat Earth Look Like From Space, with Perspective?
Does my FE Debunk in this case make sense to you guys?
Need Debunking (Claim): Metabunk Curve Calculator Does Not Calculate for Angular Size
Explained: Why does this Apollo11 photo act so weirdly?
Does Zooming in Change How Much of Something is Hidden by the Horizon [No]
Explained: Why a Spirit Level on a Plane Does Not Show Curvature "Corrections"
Why does Polaris appear stationary on a rotating Earth?
Does this photo show a too-small hole in the Pentagon? [No]
Why does the equator stay warm all year?
Does Orlando victim switch legs when he switches languages [No]
Does the Earth's Curvature Vary with Latitude? [No, not significantly]
Does Sundial Disprove Flat Earth?
Does Mick West's WTC model meet the Heiwa Challenge?
How does this Domino Tower Collapse relate to 9/11 Collapses
Study: When Debunking Scientific Myths Fails (and When It Does Not)
Does the exclusion of stiffness from Nordenson's falling girder calculations demonstrate anything?
Does Damage to MH17 indicate or exclude a Particular Buk Launch Location?
Where does "Scientist" end and "debunker" begin?
Does Guy McPherson believe in chemtrails? [No]
Does DNA emit light
How Does This Failed Demolition Relate to the Collapse of the WTC Towers?
Erin Brokovich does not believe in chemtrails.
SkyderALERT: where does the money go?
does Social Media + Ego help drive conspiracy theories ?
Super/subscript, how does one do it?
Why does the Lunar Lander leave not tracks
The Johnson and Johnson Settlement, where does it fit in the conspiracy world
Does concrete melt?
Does Seismic Evidence Imply Controlled Demolition on 9/11
How Much Does Metabunk.org Cost to Run?
Video that does actually support hypothesis with evidence
Why does JFK's Head go back after he's shot from the back? [warning: contains gore]
How much does a storm weigh?
Does NIST not testing for explosives and not testing WTC7 steel invalidate everything
How Much Money Does Alex Jones Make?
What does Greenpeace think about chemtrails?
why does this site even exist?
Share:
Facebook Twitter Reddit Pinterest Tumblr WhatsApp Email Share Link