Hi all, I have noticed that there are a number of 'Earth curvature calculators' that give a misleading figure for how much of something should be obscured. Usually (as per this one: http://earthcurvature.com/ ) they are just not doing a great job of explaining that the calculator is calculating absolute curvature based on distance from the viewer, not visible 'drop' based on distance and viewer height (and refraction if it's really good). But I have also noticed a few apps on google play store that are explicitly made by FE proponents, and may be an attempt at misinformation (or may not, I'm just noting the possibility exists - but they give misleading information either way). Aside from linking to an accurate calculator if I see them mentioned in a discussion, I was wondering if anyone has any ideas for positive action that could be taken on this?

Crazy John said:
But I have also noticed a few apps on google play store that are explicitly made by FE proponents
Click to expand...

Can you give some examples, and how they are misleading?
C

In fairness, on closer investigation, many of those Google play presented me are actually either aimed at debunking flat Earth claims (but still have 'flat earth' as the title), and are pretty good. I should have checked a few more before posting perhaps, apologies. I have found one that's genuinely misleading, which seem to be based on the old mistake of not accounting for observer height, confusing visible and absolute drop (fortunately it's not very popular): https://play.google.com/store/apps/details?id=pythagorean.calculator

I haven't checked the whole list, so there might be others, but I was mainly reacting to the sight of a search page full of 'flat earth' and the first one I tried being the one I linked, so sorry if I rang any needless alarm bells.

Crazy John said:
I have found one that's genuinely misleading, which seem to be based on the old mistake of not accounting for observer height, confusing visible and absolute drop (fortunately it's not very popular): https://play.google.com/store/apps/details?id=pythagorean.calculator
Click to expand...

Maybe you could show some images of this, and explain what's wrong with it?
C

So...
The claim on the app is that it will stimulate some 'interesting discussion about all the things which should be obscured by the curve but aren't'. The actual app interface is just this: 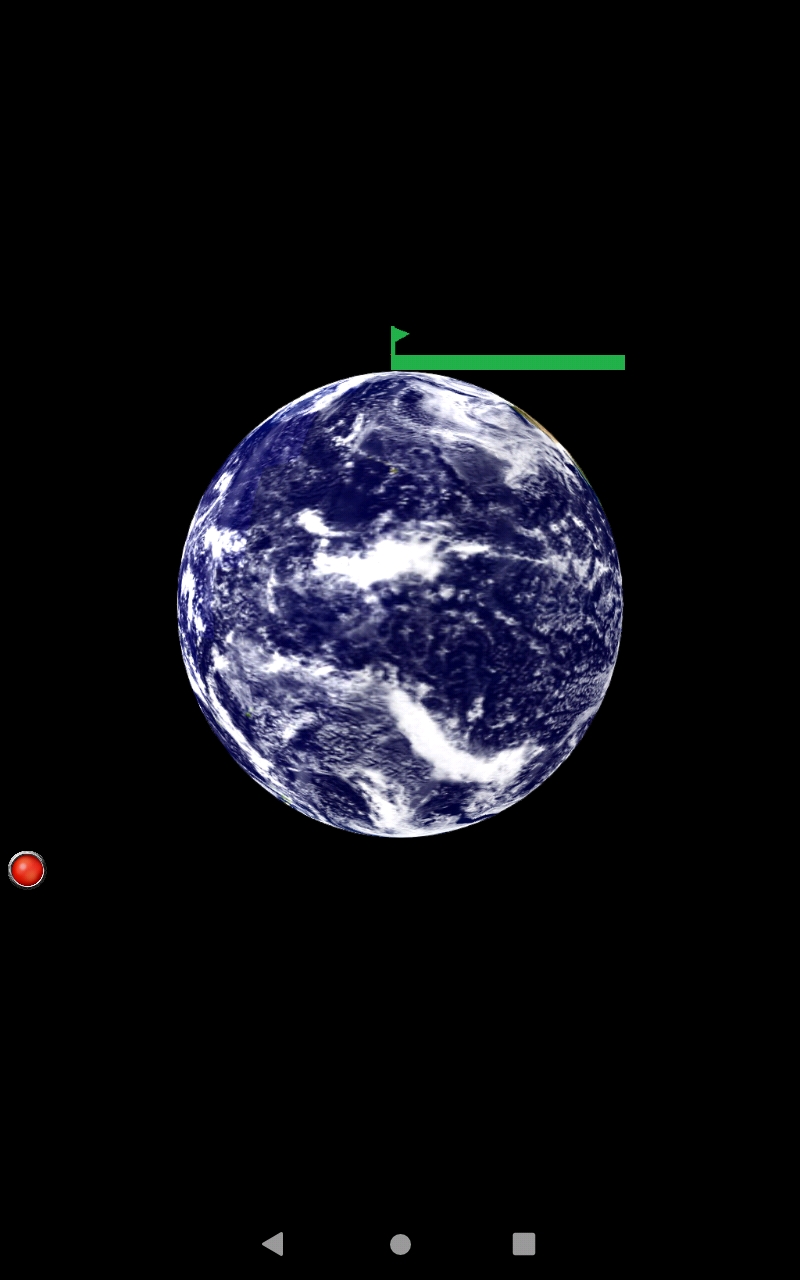 You move the green arrow away from the center (presumably the observer is standing at the pole), and the number of kilometers that represents an object being away from the observer appears in the bottom right hand corner, along with the corresponding 'drop' from the observers position. There're more images of the interface on the Google store page, but there's no more to it than that.
The problem with this is that the 'drop' of the surface, at a given distance from the patch of surface the observer is standing on, is only the same as how much of an object is be obscured by the curvature if the observer's eyes are exactly on the surface. If the observer's eye is even a couple of meters above the surface some of the obscured stuff comes back into view.

If anyone's not sure what I mean, this is checkable with a Lego figure stuck to a big ball: Have your eye close to the surface, above the ball, and rotate the ball until the Lego man is out of view. Now move your eye straight up, away from the ball (or the ball straight down): The Lego man reappears as you gain 'height' above the balls surface (as a demo that's out of scale, but it illustrates the principle).

For a real world example: If you are looking with binoculars across the sea at an island or headland 14km away, then moving from 1.5 meters height to 4 meters (say if you climb a sea wall) will reveal 6 or 7 meters of the base of the island that was obscured. A better curvature calculator will calculate this, and I've confirmed it by observation of local landmarks over water (I live on the estuary o the river Forth). There's an additional correction factor for atmospheric refraction that reduces the effect from being as big as it should be, but it's still the height of a small house that re-appears, as you climb even that small way. It's not some tiny, not-worth-worrying-about effect, and for further away objects and higher climbs it gets bigger.

So not giving the user a way to input their height, and not accounting for even an average person's height, means that how much of a distant object gets obscured will always be over estimated unless the observer literally lies down with their chin in the seawater.

All that would be fine, if the app explained that it was only giving you absolute drop, and that working out how much of a distant object should actually be visible needed additional calculations it can't do. But, instead, the description gives the impression that the figure it gives is always how much of a distant object should be obscured which, as I said, is going to be an exaggerated figure unless you are observing from lying flat at precisely sea level.

In addition, the app stopped working at all on my phone after a few minutes. But Google play stores refunds you if you uninstall it soon after downloading it, so at least it didn't cost me anything.
Last edited: Aug 10, 2020
You must log in or register to reply here.

Feb 8, 2022
Sunsignature
S
I
Debunked: "Celestial navigation is based on elevation angles from a Flat Earth"