Difference between the impact of Stratospheric Sulfate Aerosols and Contrails?

I m a bit confused as to why would Stratospheric sulfate aerosols cause the decrease of the global temperature (as it has happened in the past with big volcanic erruptions) (https://en.wikipedia.org/wiki/Stratospheric_sulfate_aerosols_(geoengineering) )while contrails are supposed to increase the global temperature (http://www.nature.com/nclimate/journal/v1/n1/full/nclimate1078.html).
Can anyone explain what exactly the difference between these both is that makes them have opposite impacts on the global climate?

Staff member
The technical term for the value that differs between contrails and stratospheric sulfate aerosols (SSA) is "net radiative forcing".

Clouds (including contrails) and other things like dust and aerosols in the atmosphere, and even the molecules of the gases in the atmospheres, all have different effects on the different types of incoming and outgoing radiation. They are more transparent to some wavelengths, and less so to others. This is important as the radiation from the sun changes after it's absorbed by the earth and re-radiated. The incoming radiation has lots of different types, some types are partially reflected by different things in different amounts. The outgoing radiation has fewer types (it's basically heat, i.e. infrared radiation), but it's also affected differently by different things.

The "net" part of this means the sum of all the effects for a particular factor. Any one factor can have a complex effect (and often poorly understood, and just estimated). Something like Carbon Dioxide will have an estimated "net radiative forcing" of a certain number of watts per square meter (a watt is a unit of energy) for each increase in concentration in the atmosphere. But it's complicated as there's different effects on different types of radiation. 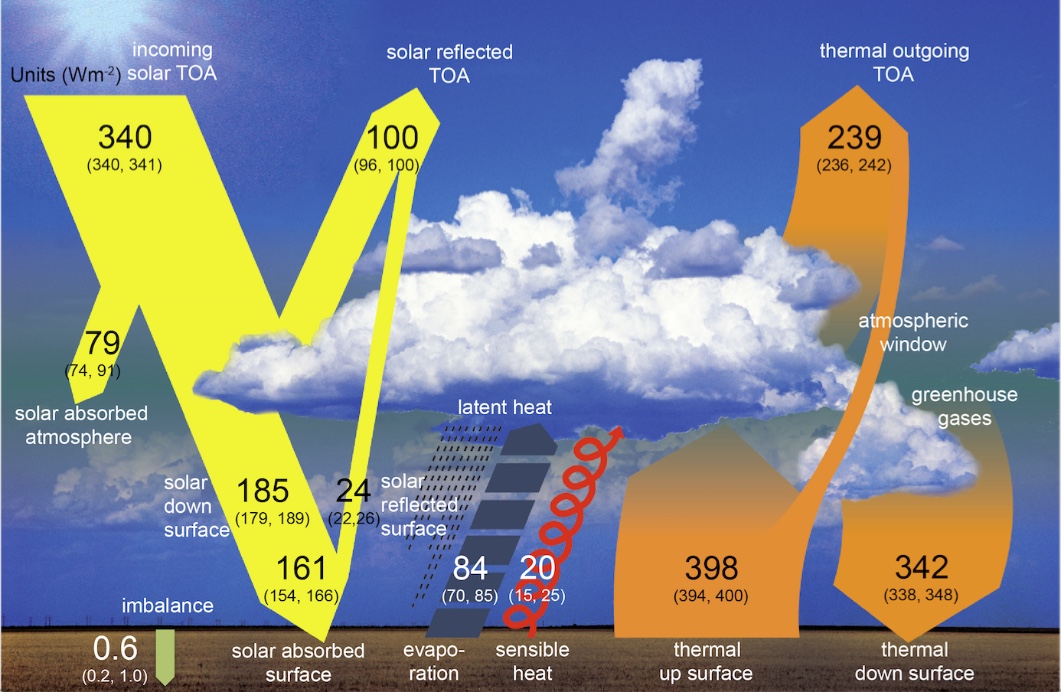 SSAs, when high enough in the sky, will block more incoming radiation than they trap, because of the different particle sizes, and where they are in the sky (the stratosphere is above where contrails form). So they have a negative net radiative forcing.

But again it's complicated, and the precise figures are difficult to discern. There can also be compounding factors, and feedback effects. SSA's can possibly create more clouds as they fall out of the atmosphere (over many years). They also alter the chemistry of the atmosphere, damaging the ozone layer. Contrails might lead to an increase in overall invisible cirrus haze of a type that can block some light.

We know that SSA's kind of work because of studying what happens after large volcanic eruptions pump a lot of them into the atmosphere. So that seems like a good contender for geoengineering, as it would mimic a natural process, and is naturally reversible.

We've also observed changes in the atmosphere and radiative forcing that seem to be correlated with contrails. It's possible we could do a type of geoengineering by changing where and when planes fly to change the net effect of contrails and contrail induced cirrus haze.

But the climate is complex and chaotic, and we've only got the one, and it's slow to react, so you can't easily experiment with it. So there's a lot of uncertainty, which is one reason people are generally very reluctant to try geoengineering and prefer instead to focus on reducing carbon emissions.
M

The key thing here is that you actually can't have sulfate aerosols "lingering in the troposphere", because there's so much turnover of the troposphere in terms of air circulation and precipitation. So SSAs would not last very long in the troposphere. The ideal altitude for SSAs is above 65,000 feet where the air is more stable (and predictable)

First, we must understand how high one needs to get material for stratospheric geoengineering, since altitude plays a big role in determining the cost and difficulty of delivery technologies. While the stratosphere sometimes extends down below 10 kilometers (32,000 feet), where it is easily reached by passenger jets, air in this part of the stratosphere is rapidly mixed back into the lower atmosphere. Aerosol injected here would have a lifetime measured in months rather than years. This might be useful for the kinds of short-term tests described in Phase 2, but would not likely be sensible for large-scale aerosol geoengineering.

The top of the stratosphere is about 50 kilometers (164,000 feet), far from reach of practical aircraft, but one need not go nearly so high. The natural flow of air in the stratosphere rises upwards from tropical latitudes and sinks downwards over the poles, so, if one can inject aerosol a bit above the bottom of the stratosphere in the tropics, it would be carried upwards and then towards the poles, resulting in a long lifetime and a relatively even distribution of aerosol throughout the stratosphere. Computer simulations confirm this intuition and suggest that injection in the tropics at altitudes a bit over 20 kilometers (65 thousand feet) would be adequate.

Altitude affects it in other ways, like the interaction with clouds, and the heating of the atmosphere itself. But I think the lifetime issue is the primary factor here.
Last edited: Dec 26, 2015
M

Misterfreeman87,
You have hit on one of the factual fallacies given out by many chemtrails hypothetists. Several years ago, after those people began settling on geoengineering as an explanation for what they saw in the sky I wondered if there could be an empirical test for that. I see that you have looked at the effect of volcanoes on the radiation budget as I did and so I looked for ways which volcanic perturbations were seen in past decades and then compared those metrics with those currently being seen. Here are two data sets explained: 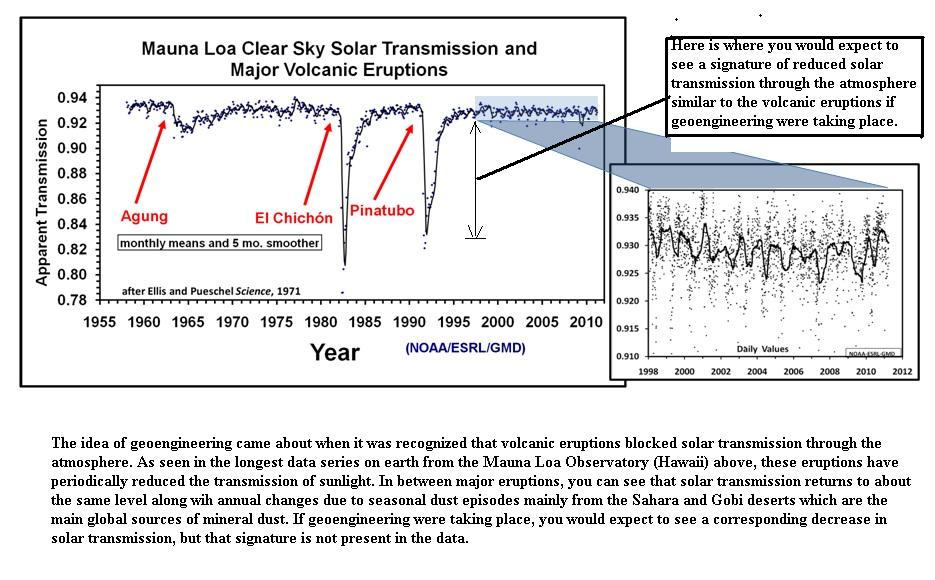 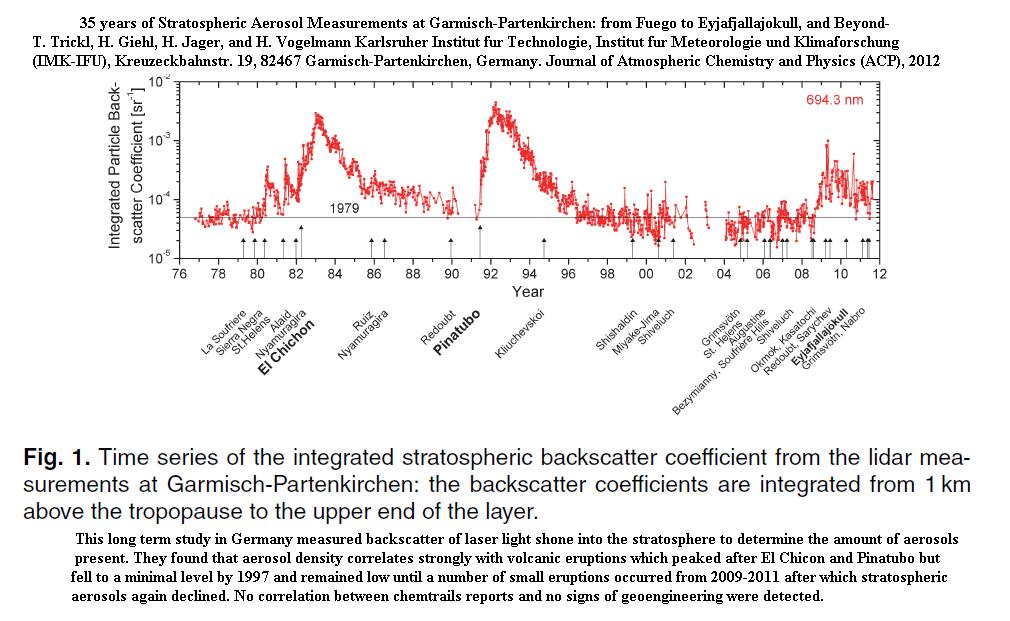 Debunk Global Warming can reduce the number of Persistent Contrails