Did Holzhauer deliberatly "sabbotage" his Jeopardy winning streak ? [No]

Winning Jeopardy contestant James Holzhauer finally lost his dominating streak of success, in the US game-show "Jeopardy".
He was about one (1) win away to break the all-time record set in 2004 by Ken Jennings of

(wikipedia) Jennings continued to win and eventually set a record of 74 wins before he was defeated by Nancy Zerg in his seventy-fifth appearance. Jennings's total winnings from the program amount to $3,022,700, which includes $2,522,700 won in his initial appearances and an additional $500,000 for his second-place finish in the Jeopardy! Ultimate Tournament of Champions. In addition, at the end of Season 20, he set a one-day record of $75,000, which would later be broken by Roger Craig, and even later by James Holzhauer.

Content from external source
Conspiracy theories immediately arose on social media, when Holzhauer only bet $1399 in "final Jeopardy" (the last question)...instead of betting more (if not his whole pot), because his rival player and librarian Emma Boettcher was already ahead money-wise, at the time of the Jeopardy final question. Plus, he knew about Emma's college under-grad thesis was about Shakespeare....the topic of the "final question".

...and others claiming there some "inner deal" between him and Sony (the show's corporate producers/owners).

But Holzhauer rebutted and disputed the various conspiracies in several social-media posts, stating that in order to win the final question at all (mathematically), was to hope that fellow contestant Emma, got the answer wrong. But she got it correct.

“I knew I could only win if Emma missed Final Jeopardy, as there was no way she wouldn’t bet to cover my all-in bet,” Holzhauer told The Action Network. “So my only concern was getting overtaken by third place, and I bet just enough to make sure of locking him out. Betting big would have looked good for the cameras, but now I turn my straight bet (Emma misses) into a parlay (Emma misses and I get it right).”
https://ftw.usatoday.com/2019/06/jeopardy-james-holzhauer-conspiracy-theories-after-loss

Content from external source
In Holzauer's last Jeopardy's episode, it seems every contestant played it mathematically correctly, or smartly....

Contestants in Boettcher’s situation almost always bet enough to beat the second-place contestant if the latter wagers everything. So Boettcher, predictably, wagered $20,201 — enough to guarantee she’d win the game if she answered correctly, preventing Holzhauer from beating her by risking everything.

Holzhauer undoubtedly knows how Jeopardy! contestants bet, so he knew he was extraordinarily unlikely to win if both he and Boettcher got the final. As such, his $1,399 represented the smart play.
https://ftw.usatoday.com/2019/06/why-james-holzhauers-small-final-jeopardy-bet-made-total-sense

The situation is described the same way, clearly, in this Time online article....

Why put up so little? To throw the game in deference to Jennings?
Or to use a number that had personal significance, just as he had previously wagered family members’ birthdays and other important dates?
No. The $1,399 wager was specific and deliberate because, mathematically, it was his best play.

Despite a strong start, Holzhauer failed to land on either of the two Daily Doubles in the second round. Daily Doubles are key to his strategy, allowing him to make big bets and pull ahead of the other contestants. This time, competitor Emma Boettcher found those Daily Doubles, wagered aggressively, and took first place.


Imagine that Holzhauer wagered everything. A correct response would have put him at $46,800. So Boettcher sensibly put $20,201 on the line, ensuring that if she answered correctly, she would win with $46,801.

On the other hand, if Holzhauer wagered it all and responded incorrectly, he would be left with nothing. If Boettcher were incorrect, she would still have $6,399.

So Holzhauer had no chance to win against Boettcher unless she answered incorrectly and he had wagered only a small amount, to keep his total north of $6,399.

Timanus was a contestant on Jeopardy!; his games aired in October 1999. He was the first blind contestant to compete on the show.
There were a few changes made to accommodate Timanus: the first was that he received a card with the category names printed in Braille before each round, and a Braille keyboard to type out his name on the podium's computer and his response and wager for Final Jeopardy!.

There were also no video-based clues during his appearances. Also, beginning with his appearances, contestants started out the show already at their podiums, instead of the old practice of walking up to them as they were being introduced. (The practice became permanent starting in September 2000.)

Timanus won five consecutive games and then, in accordance with the rules in effect at that time, retired undefeated. His winnings totaled $69,700 (USD) plus two new cars (Chevrolet Camaros in his case), and he was invited back for the 2000 Tournament of Champions in Atlanta, Georgia, where he reached the semifinals and won $5,000 there. The story became a minor media sensation, with Jeopardy!'s Nielsen ratings rising 15% for Timanus's fourth and fifth games.

Host Alex Trebek received one of six Access Awards from the American Foundation for the Blind in 2001 for his role in accommodating Timanus.

Content from external source
also another bit........For my work, I "scenically" painted one whole season of the Jeopardy! set around 2014.....meaning I painted the contestant and Alex's podiums, and other props at the Sony Studios set/sound-stage. Look for old seasons with a gold-leaf podium. 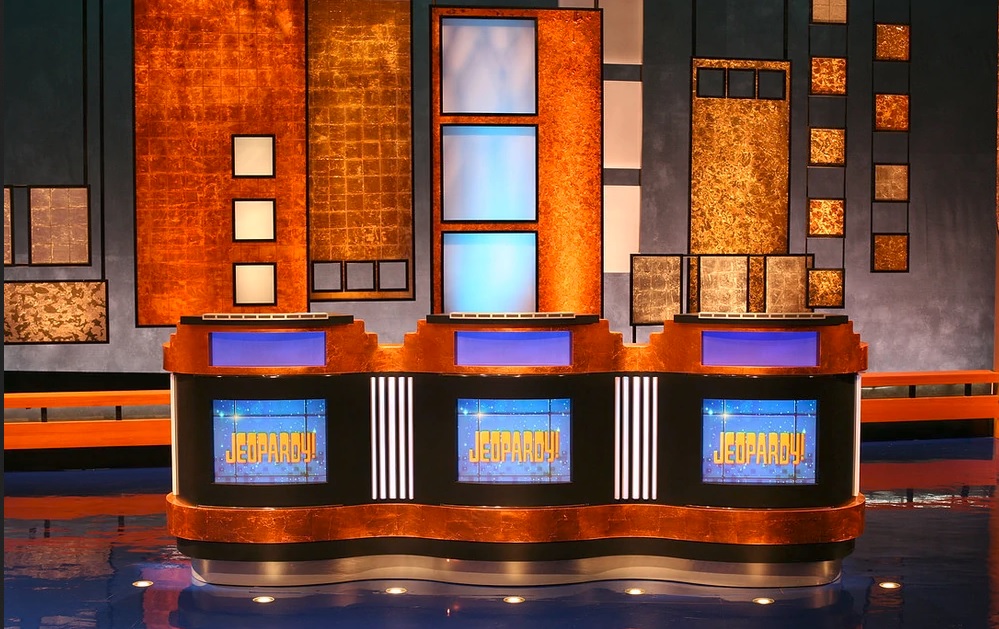 The current Jeopardy! stage/set was painted by my best friend in the scenic 'business'.
Last edited: Jun 12, 2019
You must log in or register to reply here.