Hi all, new here. Found the forum via googling about the Navy pilot UFO report. Anyway, was curious about your thoughts on this possible perpetual motion machine, described in this WSJ article: https://revolution-green.com/one-mans-unlikely-quest-power-world-magnets/. The actual claim from the inventor is:

Earth Engine is not a perpetual motion machine. Earth Engine uses the force created from two opposing magnets. Magnets are a depleting resource that requires “recharging” every three years. If the engine is shut down, it will stop rotating the drive system.
...
The magnets IEC uses are also highly one-sided, or “anisotropic,” which means their field is stronger on one face than the other—say, 85% North and 15% South.

In the R32, magnets located in three black towers interact with ones placed in the two one-ton, counter-rotating flywheels. As the flywheel rotates, small battery-powered motors move the tower magnets’ orientation at moments of highest drag. This allows the magnets to accelerate as they approach and not slow down as much when they pass.

The net force imparts angular momentum to the flywheels that can then be harvested, mechanically or electrically, IEC claims.

The biggest riddle involves the conservation of energy. Conventional physics holds that magnets have nearly zero inherent energy. Mr. Danzik believes that is because we calculate magnets’ strength by how much current they induce in a loop of wire. He argues that with the emergence of anisotropic, rare-earth magnets, we need a new set of equations to calculate a new physical quantity, which he describes as ‘’the resulting center shaft torque produced from angular momentum derived from the force of paired magnetic fields.” 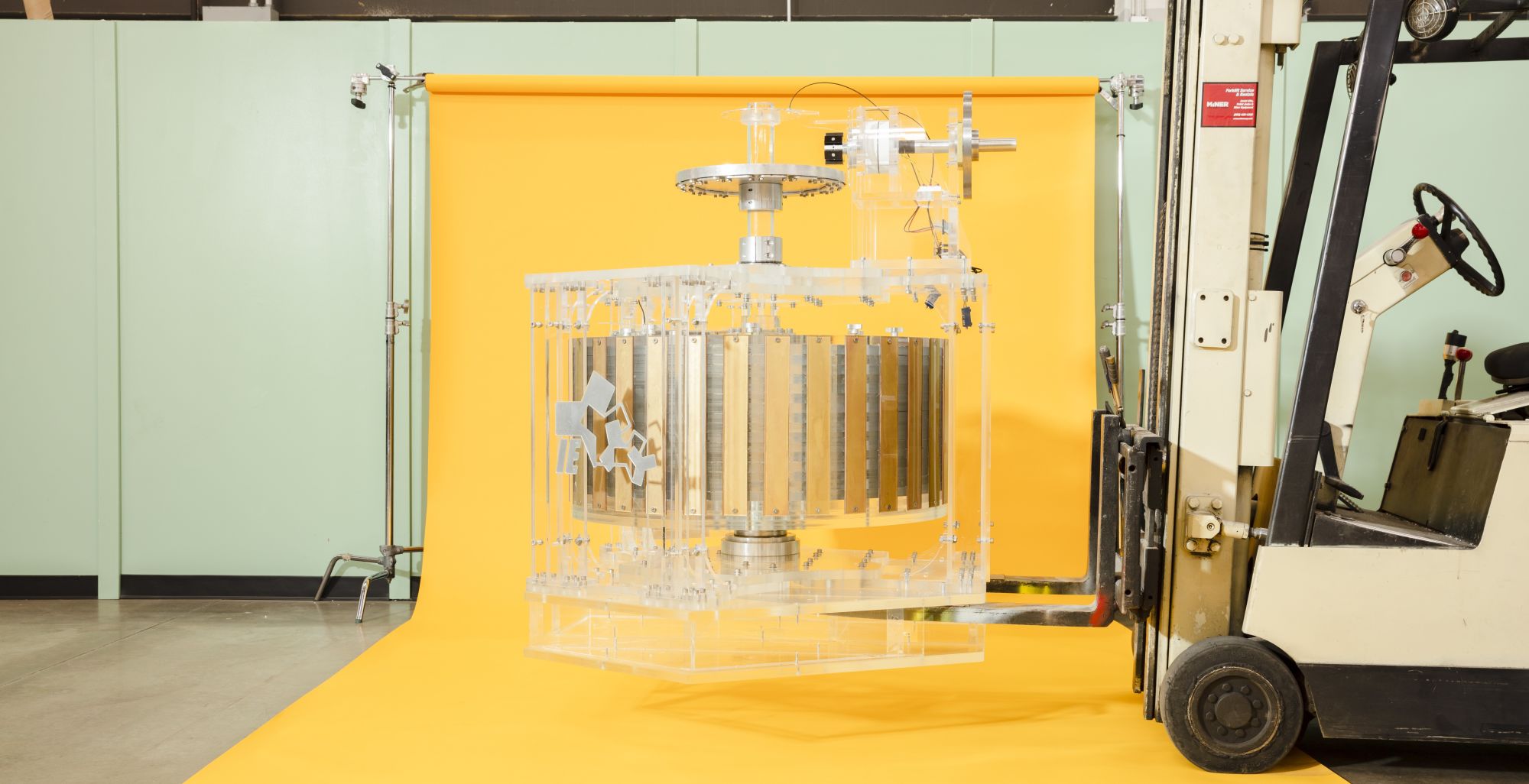 Which seems bizarre because magnets don't store energy. They claim to have [had] at least one powering a [small] shooting range.

IEC’s largest investor, Mike Halverson, owns a company in North Las Vegas, Nev., that manufactures modular shooting ranges for off-grid locations, complete with power backup. An R32 test unit installed at his facility in January ran for 422 hours, IEC says, averaging 4.4 kW output, before it was brought back to the lab for analysis. That’s enough energy to light up three average U.S. homes for a month or charge up a score of dead-flat Tesla Model S’s.

Content from external source
They used to have a live feed of one at https://earthenginelive.com, but it's been down for a while. So, how might this working? Hidden battery inside the device? Or not an intentional scam, but just a very efficient conventional motor?
Last edited by a moderator: Nov 3, 2019

Staff member
It's either an intentional scam or an unintentional one. It's hard to tell, and really not that important. I wrote this six years ago:


Mick West said:
There's a type of scam out there that's been going on for at least 100 years. A company claims to have invented or discovered something that will make a lot of money. Quite often this will be in the field of energy, although we see them more and more in the field of weather control and information technology. The company can demonstrate research, they will often hold one or more patents on the technology, and they will have some kind of prototype that does not actually fully work, but they claim is a demonstration of the proof of concept. They won't reveal all the details, despite having filed patents, because they either don't want people to steal their ideas, or they claim it's too early, and more research needs to be done.

What they are looking for though, is investors. They will talk about the huge potential market, and hence the huge amount of money to be made. They will get people to invest in their company. The technology will go nowhere slowly, and eventually, the principals will withdraw, and the investors will end up with nothing.

The scam works because it's not illegal to be wrong, unless you actually know you are wrong. So if you think you've discovered a form of free energy, it's perfectly legal to set up a company to research and develop the technology. It's quite legal to solicit investment based on what you think is correct science - even if it does turn out to be wrong, and the investors lose all their money. They took a risk, they lost. It's quite legal to pay yourself and the other principals a large salary.

So all you have to do to run such a scam is to never admit you knew it was a scam. You have to pretend you believe in the technology. Then when it fails you simply keep insisting that you thought it worked, and you were sorry you didn't get enough time to work out the kinks.

Then, of course, there are those people who actually ARE convinced that their technology works. There are plenty of people who think they actually have discovered something new, and they just need a bit more research to make money from it.

So which of the two is V3Solar?
Click to expand...

I met with V3Solar's CEO, he seemed genuine but did not really understand the science. The scientist was a bit kooky, but also seemed mostly genuine. They no longer exist because their tech was an illusion.

Here, with the Earth Engine, you've got a similar setup. There's a maverick scientist (Danzik) who claims (and perhaps believes) that he has discovered something, and you've got a CEO (Hinz) who has become convinced by the scientist.

I say if they have something, then they could actually demonstrate it. They can't. The conclusion if they have nothing.

Science has already spoken on the matter—and says there is no need to see the Earth Engine.

“Perpetual-motion machines are bunk, and magnets are the refuge of charlatans,” wrote Don Lincoln, senior scientist at U.S. Department of Energy’s Fermi National Accelerator Laboratory in Chicago, in an email. “The key is energy. How much energy do you put into it compared to how much you get out? If there’s more energy out than in, we throw away the textbooks and send [Mr. Danzik] half a dozen Nobel Prizes, because one isn’t enough.

But Mr. Danzik isn’t waiting by the phone for Stockholm to call. “I can and have demonstrated [the phenomenon] without fail, thousands of times,” he wrote in an email to The Wall Street Journal. “At this point I am concentrating on a practical application, with a commercial benefit.”

Content from external source
I agree with Lincoln. I'd also add that the second refuge of charlatans (intentional or otherwise) is "I'm done demonstrating it, and am moving on to using it."

This is a good description of a scenario that's been playing out since the early 19th century at least.

One that I'm familiar with in some detail is Andrea Rossi's Energy Catalyzer, because I used to read the site NextBigFuture. The site owner Brian Wang kept quixotically reporting on this circa 2011. The real drama was in the comments section with most readers being very skeptical and a few very fervent supporters who didn't seem to have any financial interest in the thing but who seemed to have some psychological connection to the idea of free energy.

There were demonstrations galore with scientists "observing" but not conducting the tests or able to examine the apparatus in detail. There were plans for commercial applications continually just on the horizon; including a home water heater.

In this case the inventor was a non-scientist but he got one physicist on his side: the late Sergio Focardi.

This is still going on, and in exactly the same manner: https://en.wikipedia.org/wiki/Energy_Catalyzer

On January 31, 2019, Rossi’s company released a new product (E-Cat SK) via live video stream. The product is reported as currently available to be leased by factories as a source of heat. After viewing the video, Tom Casten noted that “The -E-Cat demonstration makes giant claims of scientific breakthroughs with no validation.”[41] Similarly, the Australian physicist and aerospace engineer Ian Bryce noted that, in the video demonstration, the “inputs, outputs, and measurement points are not defined, making the results largely meaningless”, that the nuclear reaction purportedly occurring within the E-Cat SK would “release much deadly radiation. Yet the meters show zero ionizing radiation and no neutrons. Fortunate for the bystanders!” and concludes, regarding Rossi’s E-Cat cold fusion device, “there is no real doubt about it being a fake.”

Apropos to the Earth Engine...

Captain: The people in the videos are putting energy into their magnet engine. They're using magnets.

Beakman: I hate to burst your bubble there, D-Man but magnets are not a source of energy. 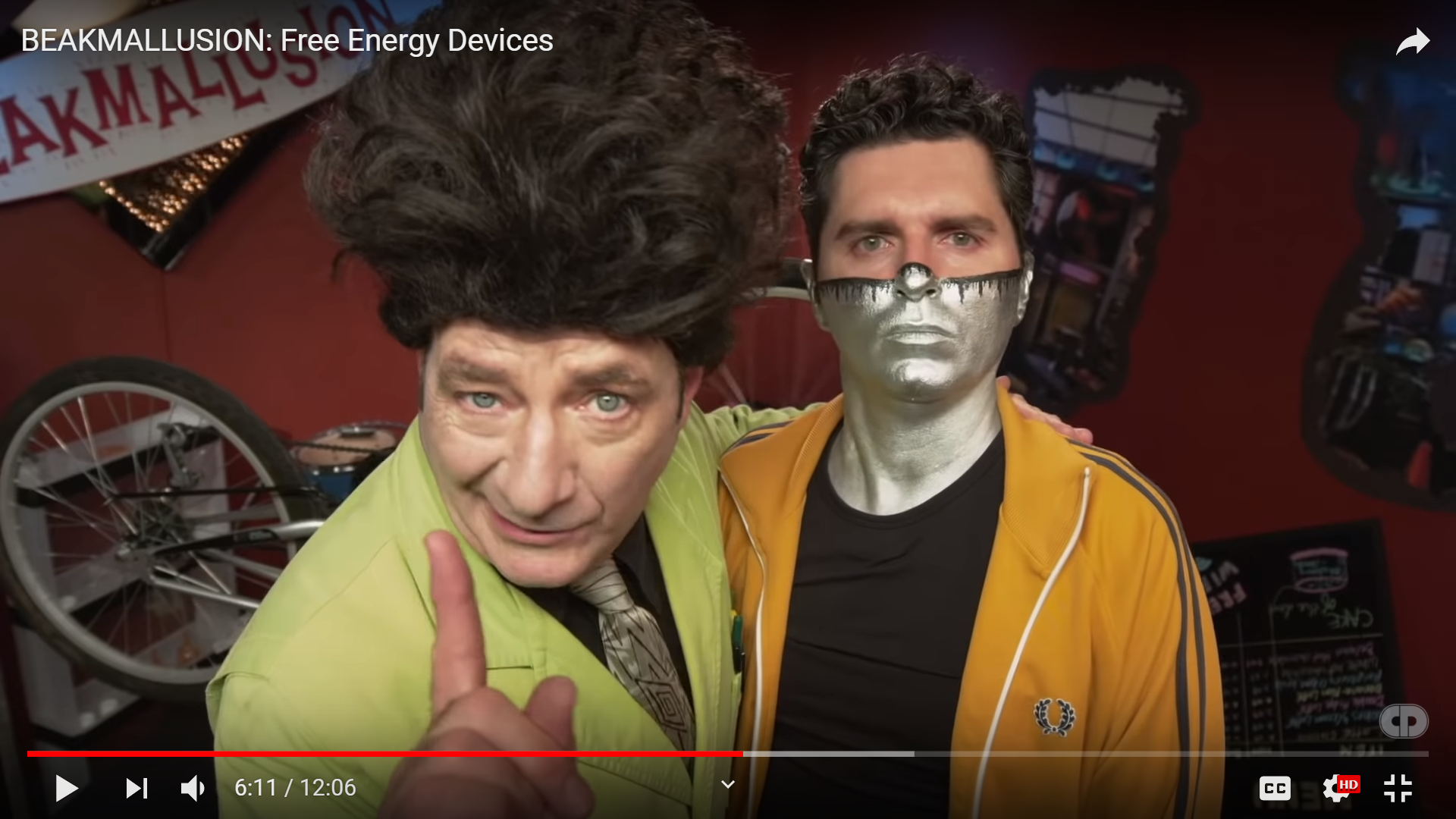