Demonstrating Spherical Excess, Spherical Angles on the Surface of the Earth

Staff member
"Jon Leighton, post: 208106, member: 10216"]I think spherical excess is also worthy of a mention. In general, the internal angles of any large surveyed triangle will sum to more than 180 degrees.[/QUOTE]

I was wondering if there was a good place we could try this in real life, three mountains where the sum of the angles is more than 180°. We could do the math and see what distances would be needed.

Something like the Sierra mountains, or some other place where we have good visibility, probably need at least 50+ miles, but the problem is how to measure the angles if you don't have a theodolite?
Last edited: Jul 11, 2017

Mick West said:
the problem is how to measure the angles if you don't have a theodolite?
Click to expand...

GPS bearing to waypoint. Problem is that FEers don't believe in GPS..

They believe in using it, they just don't believe that it's not ground-based.

Staff member
Thinking a little more on this, it's one of those proofs of a globe earth whereby in measuring it you'd actually prove it earlier, but in a different way.

If you think about the triangle draw between the peaks of three mountains (assume they are of equal height above sea level for convenience) then the lines between the peaks ARE straight lines, and the angles of that triangle actually DO add up to 180°

What does not add up to 180° is the differences in bearing between the peaks. This can be a little confusing. Consider an extreme example. The triangle formed by the North pole (point A) and two points (B and C)
on the equator: one at 0° and one at 90° west. Imagine if at each point there was an enormous tower, tall enough so you could see the tops of the other towers from it. This is about 2,7000km in this example: 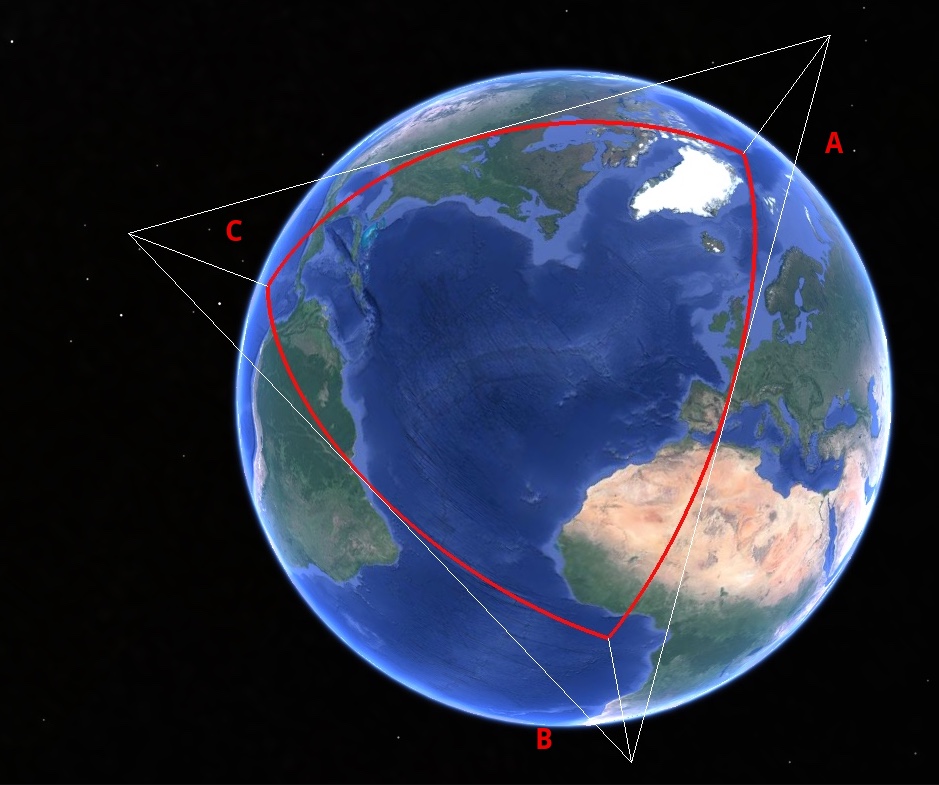 The red lines are the great circles, they indicate the shortest path, and the bearings, between any two points. Where they meet they form an angle of 90 degrees. 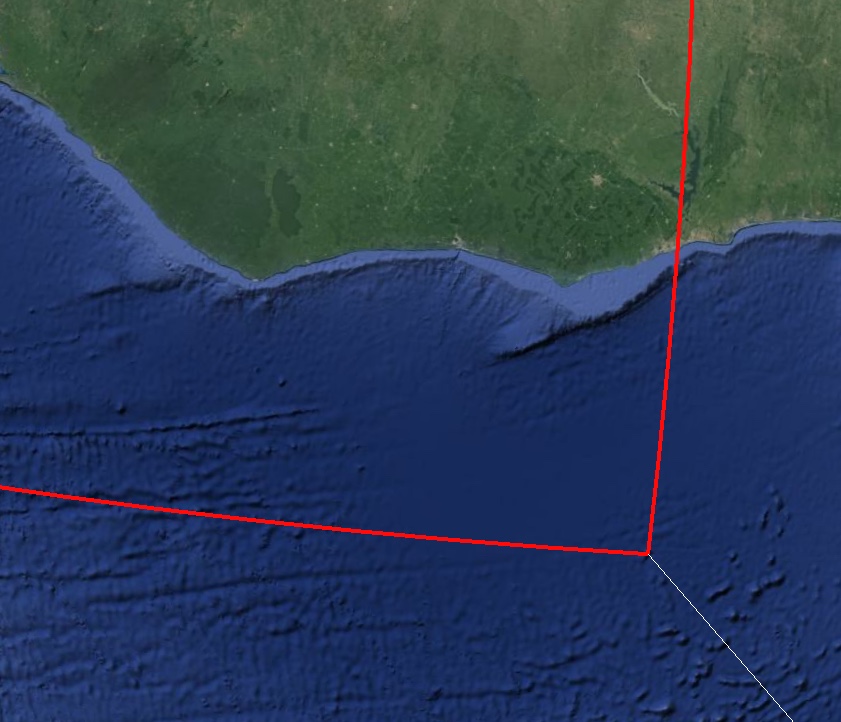 But if you were to stand on the top of the tower at point B, and measured the visual angle between point A and point C, it would come out at 60°, and not 90° 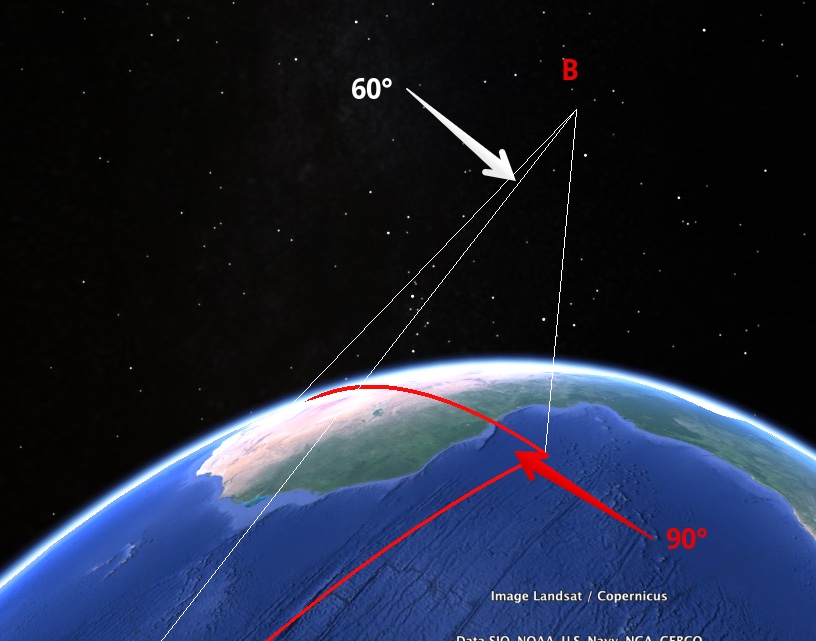 The reason is pretty obvious if you think about the geometry. The heading is measured in the horizontal plane, the visual angle between A and C is measured looking down.

So if you wanted to actually measure the spherical excess, then in the course of doing it you would also note that distant hills are below the horizontal plane (at the level of the camera), and hence by noticing this you would already have proved curvature.
I

I would suggest getting three observers underneath stars, and use those stars to measure the angles of a big triangle. A random example I checked a while ago (using Stellarium, not IRL):

The Azimuths and Altitudes of the stars as seen from these locations are:

Iskweb said:
I would suggest getting three observers underneath stars, and use those stars to measure the angles of a big triangle. A random example I checked a while ago (using Stellarium, not IRL):
Click to expand...

Something I discuss in my book is how you can actually use Stellarium instead of going outside:


There’s an easier way than going out into the cold and fiddling in the dark with your camera. You can simply use a night sky simulator app to get the same view from the warmth of indoors. My favorite is Stellarium, which is both free and very comprehensive. It allows you to set up a view from anywhere on the Earth at any time and see what the sky looks like from there. You can also speed up time, so you can position the camera in Australia, look south to see the stars rotate around the southern celestial pole, and look north to see the trails arc up over the northern celestial pole.

The objection that will be raised here is, “Why would you trust a computer program over your own eyes?” The answer is that Stellarium has never been wrong. Millions of people use it all around the world. None of them have even reported that the image of the sky that Stellarium generates is any different to what they actually see.

This is a concept known as “ground truth”—the verification of distant observations or models by actual observations on the ground. Stellarium has a lot of ground truth, so you can use it with confidence that what you are seeing is what you would actually see if you were to go to that particular place and time yourself.

It’s not just Stellarium either. There are many other programs, and many easy phone apps like Pocket Universe that allow you to point your camera up at the sky and they tell you what they see (allowing you to form your own ground truth). These apps also allow you to change your time and location with a few taps.

Have your friend travel virtually to Australia and look at the stars rotating north and south, repeat for South Africa, and Chile. Compare with similar points in the North. This symmetry of rotation can only work if we are on a ball in the middle of the celestial sphere.

The idea being that if you can prove that Stellarium models the earth as a sphere (and the stars essentially as an infinitely distant celestial sphere) then the Flat Earth argument fails if they can't show Stellarium differing from real world observations.

Of course the math/geometry is a bit beyond the average person, and the point is easily rejected if you don't understand it, but it's another tool.
You must log in or register to reply here.

Curvature and Refraction in Surveying and Leveling Through History. Old Books, etc.