Staff member
In any unfolding event nowadays, some people are going to be shouting "false flag". It's just a habit they have got into. You can see how people get into that state - once you believe that 9/11 was a series of controlled demolitions, then really, how hard is it to believe that every single thing you see on TV is faked.

As of now, there is NOTHING beyond pure speculation that this is anything other than a terrorist attack. Two bombs went off, some people are dead, many people are injured. Nobody has yet claimed responsibility, and there are no known suspects.

What's going to happen now is that no matter what evidence comes forth, there will be people who will nit-pick this for the next few years.

Wikipedia is a good place to get the latest information, and a good place to start when you want to check on some claim. Wikipedia gets updated to clarify misleading early new reports, such as the reports of additional explosive devices (none actually found so far).
http://en.wikipedia.org/wiki/2013_Boston_Marathon_bombings

Okay ... I'm new to the site ... an extremely rational human, but always a sarcastic cynic, given the number of clueless idiots, slaves, and zombies that occupy our country. I judge by logic ... always ... and I am formally trained in it (I used to architect parallel supercomputers, among other things). I appreciate anyone who tries to argue any POV, and I appreciate those who take the time to tear them apart and save me effort. I've quoted a number of nice debunkings from this site on some Sandy Hook-related theory specifics, and I like the way Mick handles himself.

I looked around and couldn't (yet) find any reference to Dave McGowan's extensive (and, as always, extremely entertainingly-cynical) analysis of the HAROLD & KUMAR WIN THE BOSTON MARATHON story, and I wondered if anyone has taken the time to consider it. Dave is no fly-by-night hip-shooting conspiracy theorist. He's done fabulous stuff (not all of which I agree with) and, while certainly hinting, lets you judge for yourself. There's a couple of more things I've seen on BOTHTON THONG that add more questions, but I think Dave raises enough. I'm especially impressed by the lack of collateral damage to any of the surrounding elements, but there are many other things in here that relate to the victims' scene, explosion sources, etc., that need answering if this story is ever to go away. I'm very busy fighting Empire elsewhere, so I don't really want to engage with anyone who hasn't actually gone through the whole series. I promise a great read, no matter where you come out, and certainly anyone that can answer all of this will take home the win, because few do it better than Dave. Thanks for letting me in.

And I have NOT watched this epic by Brendan Hunt, but I repost it here (from an extensive thread in our FB group on the subject) just to show the difference between someone who throws out one fact in a video and demands an explanation, and one who takes the time to pull together a lot of data, and present it refutably:


Another lengthy, cogent, non-hysterical analysis that is refutable:

If you want a focused conversation, feel free to start a thread looking at a particular point.

Otherwise commentary will tend to be very general and may not get anywhere useful.

eg, claims about the glass.

One of the comments that Truth News International © located on the internet that drew our attention and prompted us to start an investigation was this one by photographer Seangalbraith, about the explosions at the Boston Marathon, at Instagram. Seangalbraith wrote “Interesting that the windows are blown OUT not IN,” about 3 hours after the photo was first published by Stackiii: 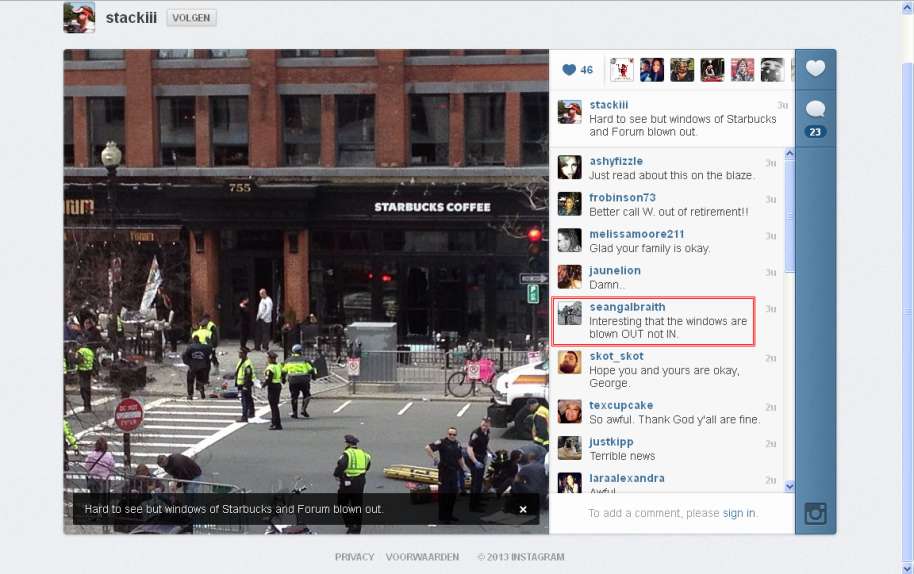 Also relating to the glass which landed on the sidewalk, AP reporter Bridget Murphy said “Based on what at least one eyewitness has told us, glass came out of the building,” as recorded in this Associated Press video.

How can so much glass from broken windows fly outwards onto the sidewalk when the blasts allegedly came from outside, shouldn’t there be more glass inside instead of outside? Was a claymore or similar explosive device used? This could also explain the presence of the ball bearings. If so, then the pressure cooker bombs would merely serve as decoys.

So the claim seems to be there was another bomb inside the building because glass could not fall outside the window frame.
(to which the answer is probably disappointingly mundane; eg, it can and did.)

Choose what you think is the most 'rational'. I wasn't really impressed by the last link, but I haven't gone through everything. I don't watch videos sorry, but others probably will. Written descriptions are best.

The most in-depth conspiratorial piece on Bauman that I’ve seen (though some remain convinced the man photographed isn’t Bauman, I use the name as an easily recognizable reference), is by author Dave McGowan who wrote a vast 15 part article series about the bombings at http://www.davesweb.cnchost.com/
As I write this sentence I have yet to engage with the series beyond a quick scan, thus I’ve titled this article a “review” instead of a “debunking” because I am always open-minded enough to change my mind should I come across evidence and a convincing hypothesis for a conspiracy.

For those that chance upon this page directly from elsewhere, a quick look at the other content of this site should prove to you that I am not a “debunker” by profession or hobby, and would be very much lumped in with the “conspiracy theorist” or “truther” crowd, though I reject those terms myself. While I have “debunked” several theories on a number of topics in my time, this is part of the process of discovering truth and is not born out of an ulterior motive. If we didn’t critique each other, any and all theories would be deemed the truth, and that would make for a very messy reality.
http://wideshut.co.uk/review-of-jef...ton-bombing-conspiracy-theory-graphic-images/


Naturally Dave McGowan has responded to… my review of his Jeff Bauman Boston Bombings conspiracy theory, though disappointingly he decided to take things to an immature and personal level at times. Like the original I will proceed to quote and reply to his ponits. Just watch his toys, because they all seem to be flying out of his man-sized pram.

So I’m guessing that there must be a special ‘debunking’ school out there that all the fucktards on the internet must have attended. I say that because another ‘debunker’ has now emerged from the fetid slime to offer up essentially the same bullshit that others have already tried to pass off as good coin. In fact, much of it reads like a cut-and-paste job that combines Quinn’s Orwellian logic with Fucktard’s overwrought appeals to emotion. This new ‘debunking’ – and I am using the term ‘new’ rather loosely here because though the piece is dated July 20, it reads as though it were written back around the first week of May and treats my series as though it began and ended with the initial two posts on May 1 – was penned, albeit very poorly penned, by a guy by the name of Keelan Balderdash.

I’m not personally aware of “Quinn” or “Fucktard”, but I’m encouraged that so many people are taking McGowan to task for his delusional “research” and coming to similar conclusions. Perhaps he should take this as a sign that he might need to reevaluate his position…we can only dream.

I reject the notion that I’m a debunker, for the same reasons as I explained in the original article. I run an alternative news website concerned with reaching the truth regardless of mainstream or alternative dogma or nonsense. In the process of finding truth, critiquing others is simply part of the process.


Anyway, Balderdash has, like Quinn, taken a decidedly Orwellian approach to debunking my work. He begins by boldly stating that he hasn’t actually read my series: “As I write this sentence I have yet to engage with the series beyond a quick scan, thus I’ve titled this article a ‘review’ instead of a ‘debunking.’” It’s actually neither a review nor a debunking but rather a craven hit piece that utilizes the same ‘talking points’ already trotted out by others. But what is important here is that he is claiming to have not even bothered to read my posts. If I may be so bold, I’d say that Balderdash’s claim basically translates as follows: “I’ve read through McGowan’s work and there is no way that I can even begin to ‘debunk’ the body of evidence that he has put together without coming off sounding like a complete asshat, but my paymasters are insisting that I give it a go so I’m going to just copy off of some other people’s failed ‘debunkings’ and pretend as though about 90% of the research he has done over the last few months doesn’t exist.”

As clearly explained in the article I chose to approach McGowan’s piece step by step so the reader could go through the motions of the review with me with an open mind. I did not want to come to my conclusion before beginning writing for the express purpose of not coming across as a disingenuous debunker. After all it was one of my readers who linked me to his pages, so I approached it as respectfully as possible. However perhaps I was being too nice, because McGowan clearly hasn’t grasped my methodology and would prefer to believe I wasn’t reading what I was reviewing, regardless of the fact that I quoted what he wrote and the pictures he presented in the article!

The idea that I have “paymasters” (whether he was joking or being serious) is just typical arrogant conspiracy theorist mentality. McGowan believes he is so important that people are paid to debunk him. Tragically the truth it seems, is that several of us fools have wasted our time on McGowan for free.

Thanks. I read through the entire series by McGowan, so I'll be interested to read that "review". McGowan doesn't put up with a lot of crap, that's for sure. I don't mind aggressive language, as long as I can discern the substantive arguments.

Seems to be mostly about Baumann, and btw, I was not interested so much in the glass (which is another good observation, as well as related to the "upper floor" explosion), as the lack of any collateral damage from the "bomb" to things like banners, poles, bunting, etc., near the blast, which supposedly shredded all those limbs.

I seem to have violated some kind of posting rule, so I'll stop here until I figure out how.

Staff member
Focus on individual claims of evidence. One per thread. Not broad theories.

Gotcha. I'll try to find a few sections worth pulling at some point. McGowan's series is worth a look for anyone interested, though. You definitely have to be careful not to get caught up in the entertainment, but he generally provides the evidence to consider (I debunked his Wagging the Moondoggie series to my satisfaction, and it's hard to know what to think about his LC series, but I was quite impressed with the specificity of the Boston Bombing series).
You must log in or register to reply here.