Debunked: "We will bury you without firing a shot"

First let me say that the only phrase in this post that I believe to be genuine is Krushchev's "we will bury you" quote. However, even that quote often gets misattributed as to when and where it was supposed to have been said. The rest of the quotes in this post have not be confirmed by multiple authoritative sources. So, depending on the standards of evidence you chose to employ, you may not want to take any of them at face value.

The meme of America falling to communism without a struggle seems to have started in the United States in 1954. It then goes through a progression, a kind of evolution, over the next 60 years. As is gets paraphrased and republished, it merges with other unauthenticated quotes to spawn new hybrid quotes that mutate into what we have today; a smorgasbord of quotes that purportedly came from Lenin, Khrushchev, both Lenin and Khrushchev, or some entirely different communist leader.

"First, we will take Eastern Europe, then the masses of Asia, then we will encircle the United States which will be the last bastion of capitalism. We will not have to attack. It will fall like an overripe fruit into our hands. "
Click to expand...

I believe this is where the meme gets its start. It's the earliest reference to the Soviet Union's non-violent takeover of the United States. During his testimony before a senate subcommittee in 1954, the soviet defector Nicholas Goncharoff attributed the quote to Lenin. Later, Cardinal Francis Spellman lends credence to the quote when he mentions it in a speech to the National Convention of the American Legion. As far as I can tell it's never been authenticated and it does not appear in any of Lenin's written works.

"We cannot expect Americans to jump from capitalism to Communism, but we can assist their elected leaders in giving Americans small doses of socialism until they suddenly awake to find they have Communism."
Click to expand...

Although not directly part of the meme it soon merges with Lenin's "overripe fruit" quote to form a hybrid. Ultra right wing groups first publicize this quote in 1960. Although they attributed it to Soviet Leader Nikita Khrushchev, some later admit that it's not a direct quote but instead paraphrases the Soviet leader's attitude towards the west. In a large propaganda campaign, it's printed on millions of post cards and sent to households all over America .

Research by Slavic division of the Library of Congress, the Department of State, US Information Agency and apparently even the CIA and the FBI could not authenticate the phrase.

"You Americans are so gullible. No, you won't accept Communism outright; but we'll keep feeding you small doses of Socialism until you will finally wake up and find that you already have Communism. We won't have to fight you; we'll so weaken your economy, until you fall like overripe fruit into our hands."
Click to expand...

"Whether you like it or not, history is on our side. We will dig you in."
Click to expand...

This remark was noted by western ambassadors during a diplomatic reception at the Polish embassy in Moscow 1956. As far as I can tell this is the only authentic quote in this entire post. 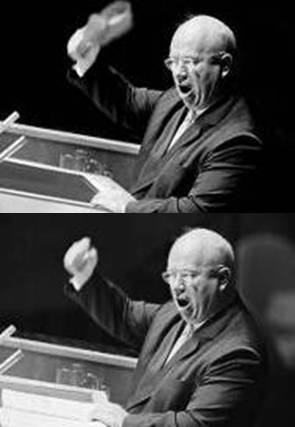 Today, we have various combinations of all four quotes. There does not seem to be any authoritative source for any of them.

"We will bury you without firing a shot”

“We will bury you from within without firing a shot.”

"We will take over American and never fire a shot"

“We will destroy America without wasting one bullet”

"We will take America without firing a shot…….We will BURY YOU! We can’t expect the American People to jump from Capitalism to Communism, but we can assist their elected leaders in giving them small doses of Socialism, until they awaken one day to find that they have Communism. We do not have to invade the United States, we will destroy you from within.”

"You Americans are so gullible! We don’t have to invade you! We will destroy you from within without firing a shot! We will bury you by the billions! We spoon feed you socialism until your Communists and don’t even know it! We assist your elected leaders in giving you small doses of Socialism until you suddenly awake to find you have Communism. the day will come when your grandchildren will live under communism"
Click to expand...

I'm not sure this is a conclusive debunk, but I doubt any Soviet leader ever said "We will bury you without firing a shot”.

Khrushchev did say "We will bury you" ("Мы вас похороним!") in a particular context. I was born in Russia in 1956, when Khrushchev was in power. In the home library, there were a few books about him from that time, where I saw this quote. Later, in Brezhnev's era, the Soviet leaders distanced themselves from the Khrushchev's internal and external politics and this and other his famous phrases soon became a subject of jokes.

Trailspotter said:
Khrushchev did say "We will bury you" ("Мы вас похороним!").
Click to expand...

Thanks for confirming that Trailspotter.

Having been born in Russia, do you know anything about the following two quotes? They're apparently from Lenin, but I don't have the cycles to look into them right now. The first one seems plausible, the second one strikes me as something Christian fundamentalists would concoct.

“Give me just one generation of youth, and I'll transform the whole world.” - Lenin

“Give me two generations of children of Americans in school without God and I will take the nation without firing a shot!” - Lenin
Click to expand...

Trigger Hippie said:
The first one seems plausible, the second one strikes me as something Christian fundamentalists would concoct.
Click to expand...

I do not think that any of the two quotes actually belong to Lenin. The first one could have summarised the Lenin's speech "Задачи союзов молодёжи" at the 3rd Congress of Russian Young Communist League in 1920 that we all had to study at school. But in the speech itself there is no such a quote. As for the second quote, I do not recall any Lenin's publication that mentions America or Americans. Probably, there was none.
J

I have read this quote from Secretary of Agriculture, Ezra Taft Benson; can you please point me to the source that corroborates your statement that "Benson contradicts himself and claims it was something Khrushchev had said several months before coming the United States." and also his later claim, as you write, that "it might not have been Khrushchev's exact words, but it summarized "in substance"" what the USSR leader had said.

"You Americans are so gullible. No, you won't accept Communism outright; but we'll keep feeding you small doses of Socialism until you will finally wake up and find that you already have Communism. We won't have to fight you; we'll so weaken your economy, until you fall like overripe fruit into our hands."

i remember these words attributed to NIKITA KHRUSHCHEV and was wondering if anyone else has: "american are digging their graves with a spoon." -

I've heard the whole burying thing was in reference to the Soviet Union's economic prowess. He was saying that they would completely out manufacture the United States. Soooooper overdramatic, but as one person said, he was prone to that.
Q

I know a former UN Police officer who heard the UN Speech and also spoke Russian, the official UN Transcript of Khrushchev's speech indicate that the Official translator had difficulty in making a US approved translation as Old Nikita sometimes used colorful Muscovite slang a lot. there were no 8 second delays or audio/video tapes. The 3 Major National TV networks broadcast it live I believe the day he said it, John C Daley was the ABC reporter, Eric Sevareid reported for CBS Edward R Morrow was the NBC reporter and official Democrat talking head at the time
You must log in or register to reply here.