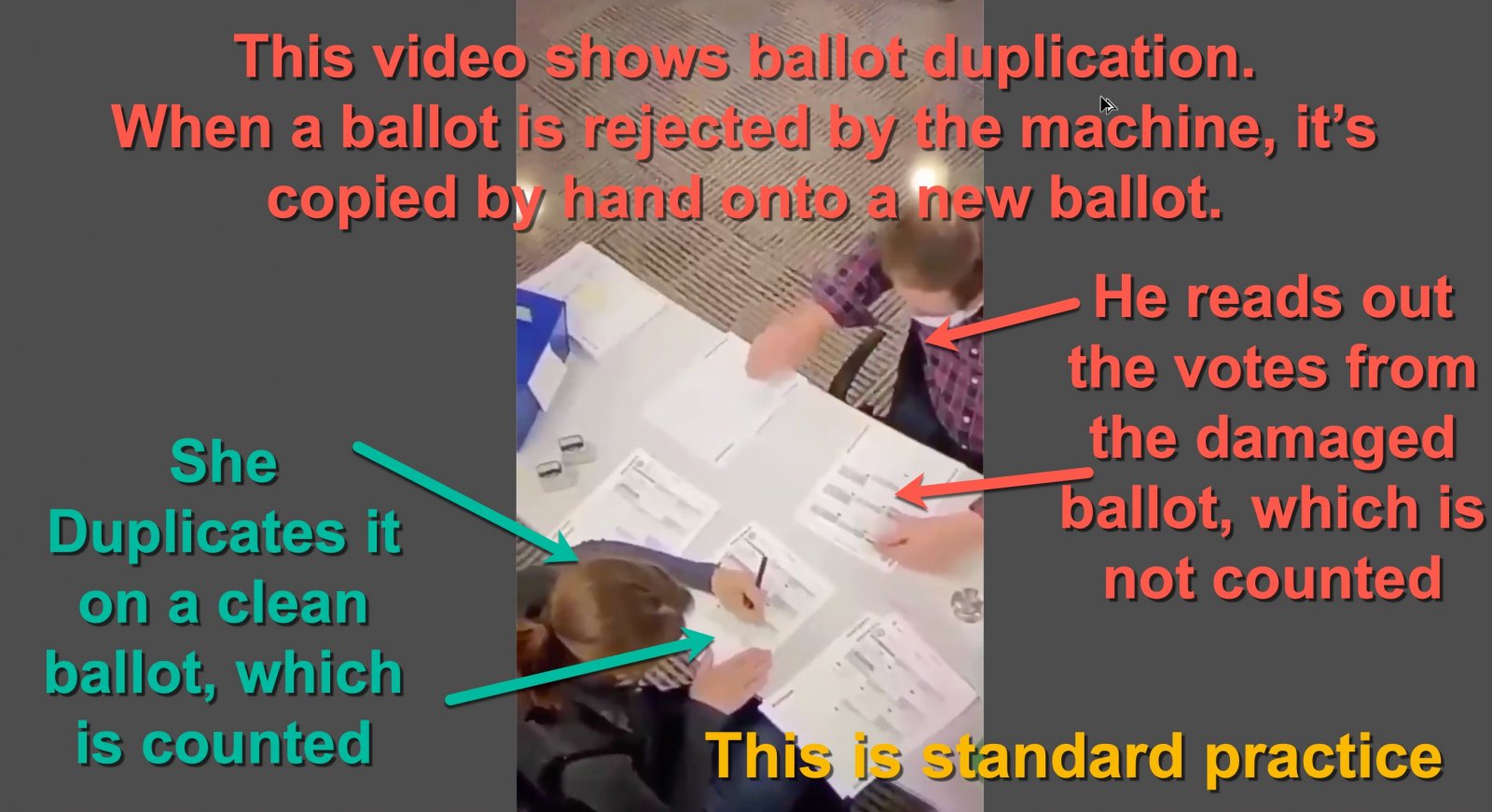 A video shared on social media shows an overhead shot of a table at a polling place (it's not clear where). There are two people at the table. A man is reading ballots, a woman is filling in ballots. This is presented as evidence of voter fraud.

It is actually the standard practice of duplicating or "transposing" damaged ballots so they can be read by the counting machine, as explained in this Michigan Board of Elections training video from 2016.
Source: https://www.youtube.com/watch?v=rrZLC9_7gKk

The procedures for duplicating ballots are detailed below:
After identifying the ballots which must be duplicated, count out an equal number of unused ballots and remove the ballot stubs. At the top of the first “original” ballot to be duplicated write “1”; at the top of the blank ballot that will be used to create the “duplicate” write “Dup 1.” Follow the same numbering system for the remaining ballots which must be duplicated, e.g.: “2” – “Dup 2”; “3” – “Dup 3”; etc.

After completing the duplication process, the election inspectors who handled the procedure must verify that:

2) that all valid marks have been transferred from the “original” ballot to the corresponding “duplicate” ballot.

As explained above, this same numbering scheme is continued for all ballots requiring duplication. The second “original” ballot to be duplicated is numbered “2” and the “duplicate” ballot is labeled “Dup 2,” etc.

Reality: In some circumstances, elections officials are permitted to “duplicate” or otherwise further mark cast ballots to ensure they can be properly counted.

Get the Facts: Some ballots cannot be read by a ballot scanner due to issues such as damage or misprinting. Some jurisdictions hand count such ballots, while others create duplicate ballots so they can be read by a ballot scanner. Some jurisdictions permit election officials to enhance markings on ballots that are too faint to scan following a process to adjudicate the voter’s intent based on state law. In jurisdictions where duplication of unscannable ballots is permitted, election officials duplicate the ballot precisely to ensure all the voter’s choices are transferred correctly to the new ballot. Both the original and duplicate ballot are labeled and logged so that the two ballots can be tracked and audited. Many jurisdictions require bipartisan teams of two or four personnel to complete this process and verify that votes are accurately transferred to duplicated ballots. The process is often open to public observation.

In some jurisdictions, ballot duplication is referred to as ballot remaking, ballot replication, or ballot transcription.

I just watched the Michigan training video and the “duplication” process followed in the 2020 video is not the same. For instance, neither election official/worker writes Dup 1 or Org 1 at the top of the ballot. The only person writing in fact is the woman. Secondly, the woman writing the votes in cannot see the “original” ballot as the man is across from her and not on her side. How is she verifying what he’s calling out? Seems like the “duplication process” even by Michigan standards is not being followed.

That's a video from before the 2016 election, it gives a good overview, but the process is in the manual, above.


Vee said:
For instance, neither election official/worker writes Dup 1 or Org 1 at the top of the ballot.
Click to expand...

They use stamps. The manual says that the labelling is done BEFORE the votes are duplicated.


Vee said:
Secondly, the woman writing the votes in cannot see the “original” ballot as the man is across from her and not on her side.
Click to expand...

That's not a requirement.

And again, this is a bipartisan pair of workers, both interested in their candidate winning, but both (or at least one) working towards an accurate vote. They know that there's a possibility of a recount. They know they are being recorded. They know there are observers in the room. They know there are supervisors. They know interfering in an election is a serious federal offense with jail time. They know changing a couple of votes isn't going to change anything.

Not only is there no evidence of cheating in this video, but the very idea also seems ludicrous.
You must log in or register to reply here.