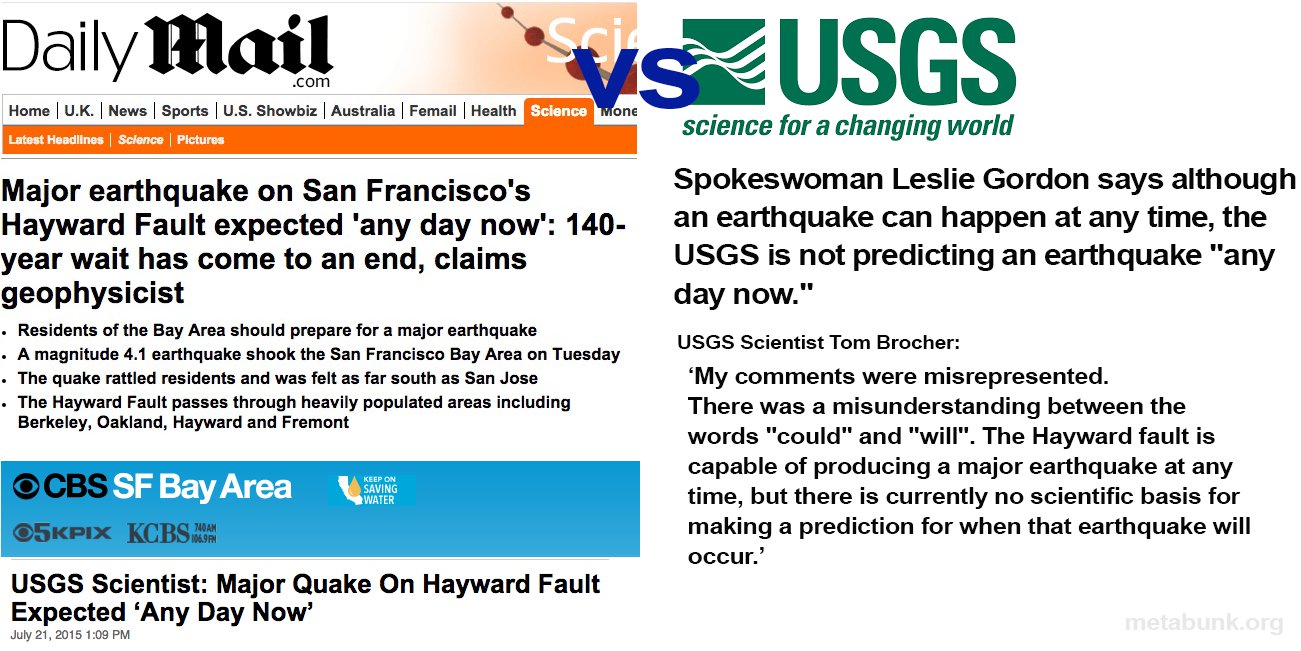 Numerous media outlets have repeated the headline that seem to say a USGS scientist, Tom Brocher, has predicted there will be a major quake in San Francisco in the next few days, as seen on the left of the above image.

However, Tom Brocher responded to this by saying "my comments have been misrepresented" and that the actual risk is "a 31% probability of a magnitude 6.7 or larger event in the next 30 years". And the USGS spokeswoman said: "the USGS is not predicting an earthquake 'any day now'"

In other words there's no prediction, just a one in three chance of a large quake some time in the next 30 years. Nothing like "any day now".

The phrase "any day now" was only spoken by the reporter Andria Borba. Brocher is simply noting that earthquakes can happen at any time, so it's good to be prepared.

The USGS later issued an update on their Facebook page:

Although a Hayward fault quake CAN happen at any time, it does NOT mean it’s "expected any day now.” Misquotes in one story have gone viral. USGS does not predict quakes. The M4 quake in Fremont, Calif. on Tuesday was not likely to have much of an impact one way or the other on the likelihood of a major earthquake occurring on the same fault. Good reminder to prepare.

Here's what Brocher actually said in the article:

“The past five major earthquakes on the fault have been about 140 years apart, and now we’re 147 years from that 1868 earthquake, so we definitely feel that could happen any time”

The "140 years" comes from the historical record: 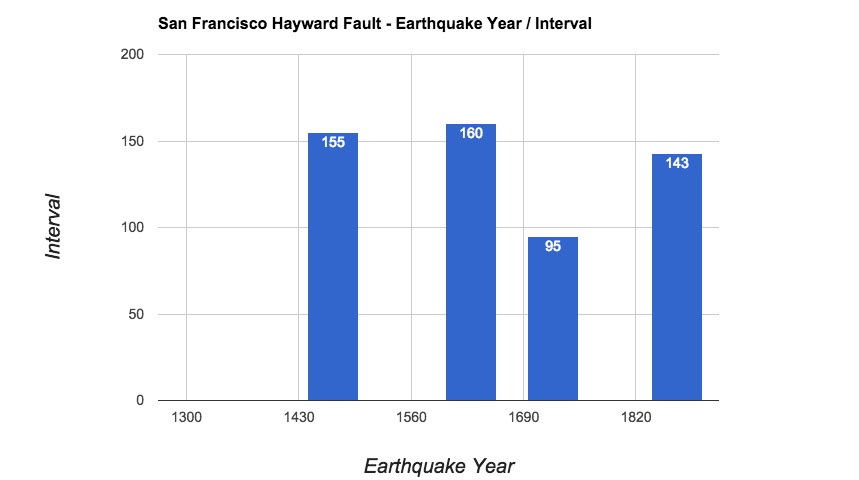 What this indicates is not that earthquakes happen on this fault "every 140 years", but rather that they can happen at any time.

"Tuesday morning’s 4.0 earthquake was not likely to have much of an impact one way or the other on the likelihood of a major earthquake occurring on the same fault."

So while earthquakes can happen at any time, and it's a good idea to be prepared, there's nothing at all to indicate a large quake will happen "any day now". It could be tomorrow. It could be in ten or a hundred years. So get your earthquake kit ready just out of normal caution, not media hysteria.

I contacted Tom Brocher, and he gave a detailed clarification:


You are correct in thinking that my comments were misrepresented.

The USGS asked the Bay City News to print a clarification which I have pasted at the end of this response. There was a misunderstanding between the words "could" and "will". The Hayward fault is capable of producing a major earthquake at any time, but there is currently no scientific basis for making a prediction for when that earthquake will occur. The Uniform California Earthquake Rupture Forecast (UCERF3) model gives a 31% probability of a magnitude 6.7 or larger event in the next 30 years on the Hayward-Rodgers Creek fault system.


As the attached fact sheet about the Hayward fault states, geologic studies at Tule Pond (in Fremont) on the southern end of the Hayward fault have shown that the average interval between the past 5 surface-rupturing earthquakes has been 140 plus or minus 50 years. The average interval of the past 11 earthquakes on this segment of the fault is 170 plus or minus 80 years.


The last surface rupturing earthquake on the Hayward fault was October 21, 1868: it had an estimated magnitude of 6.8.


And the original source of the story, the Bay City News wire service, has been contacted by the USGS, leading to then issuing this this advisory:


The U.S. Geological Survey would like to clarify the comments of one of its scientists today in BCN29 (FREMONT QUAKE). Spokeswoman Leslie Gordon says although an earthquake can happen at any time, the USGS is not predicting an earthquake "any day now."

Although Bay City News Service stands by its report, subscribers may want to consider using the following alternate lede to BCN29:

X X X Although the fault that produced a 4.0-magnitude earthquake in Fremont this morning is not expected to change the likelihood of another major quake on the same fault, a U.S. Geological Survey scientist said a major earthquake could happen at any time and residents should be prepared.

That article made the email rounds yesterday. It was forwarded to me by a concerned relative who had received it from someone else, etc.

When I read that article before leaving work, I thought that it meant that the USGS was predicting that last night's quake in Fremont was a precursor to a major quake expected to hit within the next few days. I even contemplated taking 680/24 home from work rather than 580 so as not to have to drive so close to the fault. But I threw caution to the wind and drove 580. After getting home and reading the article more carefully, I see that the USGS isn’t saying anything new - the Hayward fault is overdue for a major quake and we should be prepared. They even said that last night’s quake is “not likely to have much of an impact one way or the other on the likelihood of a major earthquake occurring on the same fault”.

Nonetheless, it's a reminder to stop putting off being prepared just in case!

Staff member
Yes. In a way it's good to remind people to make earthquake preparations, but not to the extent of having them freaking out about a major quake "any day now".

I agree. It's pretty irresponsible journalism. The local CBS has a pretty good reputation, so hopefully the "any day now" journalist gets a stern lecture.

Scientists need an international database of journalists' scientific literacy that they can consult before agreeing to speak to them. At the bottom of the scale: Nathan Rao.

Living right on top of this fault, and several landslides for 20 years. It's moving all the time! Anything below a 3.0 is "so what". You get used to it and if you do not have your emergency supplies etc... on hand by now you will find quickly that most folks will be in it for themselves only when it comes to survival. Some will be helpful, but for most it will be dog eat dog. Others will take it as an opportunity to loot, rob and plunder those who are without their own ability to protect theirself. Take this as a hint to be prepared as others in this OP have so nicely pointed out. Not much you can do about the time of day that it hits but you would rather be at home than on any Bay Area roadways.....

Skaredstiff said:
Some will be helpful, but for most it will be dog eat dog. Others will take it as an opportunity to loot, rob and plunder those who are without their own ability to protect theirself. Take this as a hint to be prepared as others in this OP have so nicely pointed out. Not much you can do about the time of day that it hits but you would rather be at home than on any Bay Area roadways.....
Click to expand...

My experience with the Northridge Earthquake seemed to bring out the best in people. I lived within 10 miles of the epicenter at the southern end of the Santa Clarita Valley. We were without power for over a week. Everybody in the neighborhood got together, we stock piled our food and water, putting as much of the frozen foods as we could in the biggest freezers in the neighborhood, keeping those sealed and ate out of the smaller freezers. We pulled a bunch of BBQ's into the front yards. The first night everybody brought out their best steaks and seafood, not wanting that to go to waste.

The next week was a big block party, with a couple of BBQ's constantly going and everyone else going house to house helping clean up the damage in each others houses the best we could. Before the earthquake, I only knew a few of my neighbors, I got to know pretty much everyone within a couple of block radius by the time the power was restored. We never did dip into the non-perishables, and still were working on frozen food.
I'm sure we could have managed for at least another week or 2.

Thanks for the positive attitude! I hope you are right, but I just do not see that in the "me, me, me" "neighbors" that I have. The young techies invading the Bay Area are mostly thinking about themselves only? I know I am prepared and would behave as you describe. Personally I just did not see anyone with the most basic readiness last time the power went out for over 6 hours. They depend way too much on others to take care of them in times of need.

I am well aware that there was a cosiderable community effort demonstrated in the Loma Preaita incident. Let's hope you are correct. Yet, folks get ready even if it's 10 years away it will happen! Maybe media should have said "any year now"?

You can't judge people's disaster response by their business-as-usual behavior. When it's sustainable (that is, most of the time), informed self interest is an entirely rational way to make life decisions - as much as it sounds like a sociopathic thing to treat life like the prisoner's dilemma, the alternative is to trust all the strangers around you to act in your personal interest instead of theirs.

This is sustainable and overall benign when it's limited to you voting to lower your taxes and them voting to keep their insurance, neither side actually accomplishing much but the whole generally kludging away in a net-positive direction. When it actually puts you in direct conflict, however, it's not sustainable - when the cost of losing the prisoner's dilemma becomes death or hunger, the only winning strategy quickly becomes cooperation, everybody taking the screw-or-be-screwed path gets screwed into bad places in short order.

The SHTF thread also had some illustrations on this - during the government collapse in (I think it was Argentina?), the cities fared well by community collaboration very much like the Northridge Earthquake, but groups that had prepared for the screw-or-be-screwed might-makes-right style of SHTF fared poorly - despite only lasing a matter of days, their compounds were found empty and looted afterwards, their guns taken from them and used on them, all their preparations in vain.
You must log in or register to reply here.

T
Claim: Bushfires have not been affected by climate change, and are affected by impeded hazard reduction
2