The recent release of many documents relating the the investigation of the JFK assassination has shed a little more light on some old situations. One such document from 1962 described how the US might acquire or manufacture some Soviet MiG aircraft. Several uses for these planes were listed, and one such was as false flag operation, where the US would pretend to be under attack in order to justify "U.S. Intervention".

Russia Today (RT) picked up on this mention and wrote about it:
https://www.rt.com/usa/410636-jfk-false-flag-ussr/

Recently declassified documents related to the assassination of US President John F. Kennedy confirm the existence of a plot to start a war with the Soviet Union by conducting a false flag attack.

Do they though? Even if we only look at this document, a brief mention of a possible kind of usage is not the same thing as a plot. Secondly there's no mention of starting a war with the USSR (The Soviet Union, basically Russia), the purpose of the posited fake attack was "to provide an excuse for U.S. intervention.

Intervention in what? There's really only two possibilities in 1962. Firstly there's Vietnam, where the US was already involved with 12,000 "military advisors". But there was no immediate desire for military intervention in North Vietnam in 1962. That did not happen until 1964, after the trumped up second Gulf of Tonkin incident was used as a pretext.

The actual intervention being discussed here is Cuba. At that exact time in 1962 the US Joint Chiefs of Staff were looking for excuses (pretexts) to invade Cuba. They went as far as drawing up a list of possible fake pretexts, false flags, that might be used. This was the infamous "Operation Northwoods" document, which was drawn up, and then rejected. The Northwoods document was made public in 1997, again as part of various JFK related releases. It contains the "plan" for the use of fake MiGs 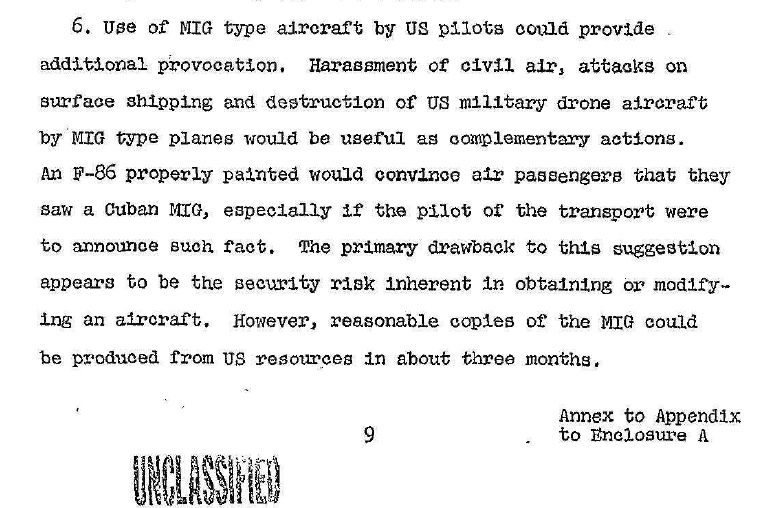 The newly released document is less optimistic about this timeline, saying more like 6-12 months. 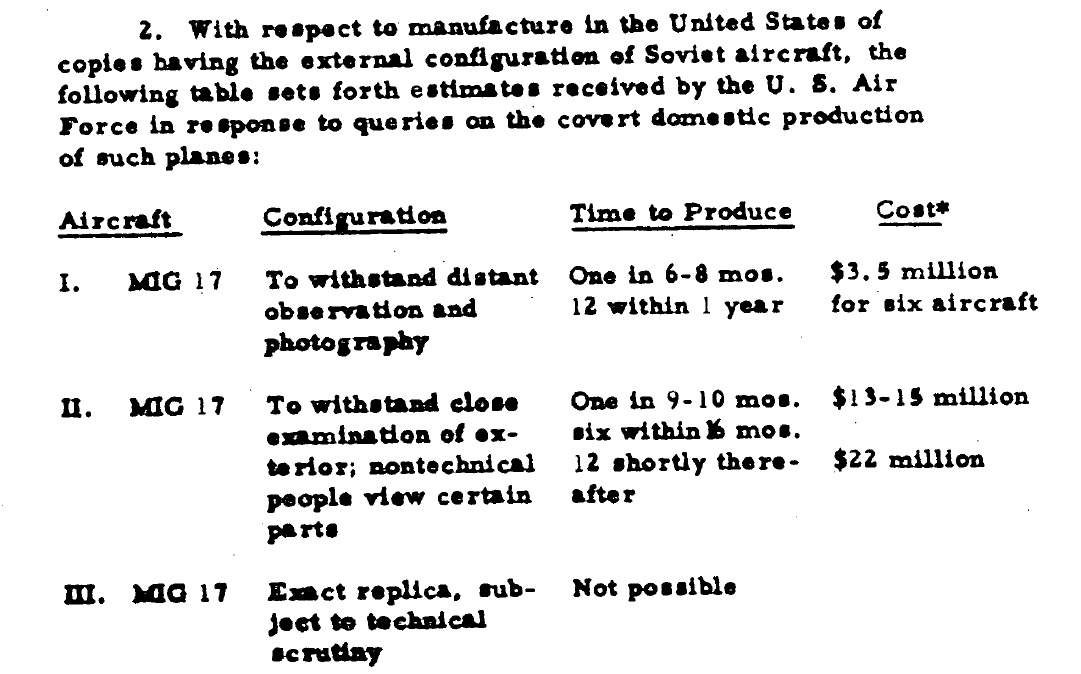 RT make another claim to back up their headline:

The existence of a false flag plan involving fake Soviet warplanes was revealed in a 2001 book by Robert Dallek, ‘An Unfinished Life: John F. Kennedy, 1917-1963.’ The book attributes the idea to CIA Director McCone.

However that does not really match what's in the book. Dallek says on Page 656:


The ICC wished to encourage “developments within Cuba that offer the possibility of divorcing the Cuban government from its support of Sino-Soviet Communist purposes.” But how? The ICC could only suggest applying “increasing degrees of political, economic, psychological and military pressures … until the Castro/ Communist regime is overthrown.” It offered no explanation of just how this would be done or why it would work. And though the CIA had resumed covert activities, including new assassination plots against Castro, they were as ineffective as before. Indeed, their schemes were often ludicrous. In 1962, for example, McCone suggested they could acquire a Soviet fighter plane through defection,
purchase, or U.S. manufacture. The plane could then be used “in a provocation operation in which Soviet aircraft would appear to attack U.S. or friendly installations in order to provide an excuse for U.S. intervention.” Although McCone made no mention of Cuba in his memo, the U.S. base at Guantanamo was a perfect fit for his idea. The White House ignored the proposal.

Far from supporting the idea of wanting a war with the USSR, we see the reason given here as "the possibility of divorcing the Cuban government from its support of Sino-Soviet Communist purposes" - i.e. making Cuba less communistic. And far from being a plan, Dallek says this was a "ludicrous" scheme
that was ignored by the White House.

So why am I saying this is "debunked"? Well the claim here is that there was a plan to start a war with the Soviet Union. There was not. There was a desire by some elements in the US government to intervene militarily in Cuba. There were various (often ludicrous) ideas on how to do this, but none of them ever rose to the level of a "plan" before being rejected. The US wanted to unseat Castro's communist regime in Cuba much like how they wanted to unseat the North Vietnamese communists. But they did not want full scale war with the USSR - the specter of Mutually Assured Destruction with nuclear weapons was enough to prevent that.

Staff member
It's also worth noting that the US has fake Russian planes now. They are used as "Aggressor Squadrons", pretending to be Russians or Chinese, for practice.

https://www.metabunk.org/debunked-u...hter-jets-for-false-flag-2014-training.t8018/
"Aggressor" jets, tanks, and even soldiers have been a common feature of the US Military for decades. Here's a New York Times article from 1988:
http://www.nytimes.com/1988/04/17/magazine/americ-s-red-army.html?pagewanted=all

THE IDEA OF TRAINING against a highly disciplined enemy originated in 1968 with a study conducted by Capt. Frank W. Ault, formerly commanding officer of the aircraft carrier Coral Sea. The conclusions he reached underlined the hard lesson learned by American airmen in the skies of Southeast Asia: peacetime training was seriously deficient when applied to the fierce chaos of actual battle.
...
After the [Vietnam] war, the Air Force created Adversary Tactics, part of the Tactical Fighter Weapons Center, and under it the 64th and 65th Air Force Aggressor Squadrons, each with about 30 planes and pilots thoroughly trained to fight, fly and think the way a Soviet pilot would. Squadron members wear shoulder patches of a red star in the cross hairs of a gunsight. There are two sister Aggressor squadrons, one in England, one in the Philippines.
...
After the briefing, the pilots scrambled into their planes to run through the exercise. The surrogate Soviet pilots fly small, quick F-5's painted with various Soviet-bloc camouflage schemes. American pilots fly the F-15E's, the primary Air Force air-to-air combat aircraft.