Around January-February of 2019, a "leaked" video was published online of a woman speaking about how earth has made first contact with extraterrestrials. The following is the video in question, I'll transcribe it below.


Announcer: "Please refrain from any questions during the speech. Please turn off all cameras. Recording of the following speech is not allowed. All channels and companies, if the video appears of the air, then prosecution will follow. No video, no audio. Now. I am Welcoming a visionary in the field of space, founder of the international space platform Galactica Aliya Prokofyeva."

Aliya: "Honorable President of the United Nations General Assembly, Maria Fernanda Espinosa Graces. Ladies and gentlemen. I have an announcement.

On December at 4:07 pm an extra-terrestrial contact occurred. A metal object, shaped like a pyramid appeared over the Pentagon, Washington DC, the United States of America. An unidentified flying object, diameter around 100 meters, rotated around its own axis at an altitude of around 500 meters.

NASA operational task group, specializing in the receiving and processing of the space data received an incoming data from the object. At the moment as I speak here bow the data has been processed and investigated by NASA.

The information from the radars, the visual information and the fixation of the radio signals incoming from the unidentified flying object were made. According to the data we can say that the object hovering over the Pentagon, can be identified as an aircrafts of unknown origin. Hypothetically extra-terrestrial. However, there were no signs of aggression.

The repeating radio bursts, named FRB 180814.J0433+73, recorded by the specialists of the CHIME observatory, British Columbia's Okanagan Valley matches the pattern of the signal fixated by NASA incoming from object hovering over the Pentagon. Currently, work is already underway to calculate the coordinates of the signal source and the corresponding inhabited celestial."

The video is fake, there's logical as well as empirical reasons for it. The main reason that it is fake is the fact that the video itself is real but Aliya was added as an edit. The original is of Recep Tayyip Erdoğan (President of Turkey) from 73rd UN session that took place on the 25th of September 2018.

The panel of Red-ish, Grey and purple suits; Woman in pink with a phone; Man with teal tie and glasses and military man: 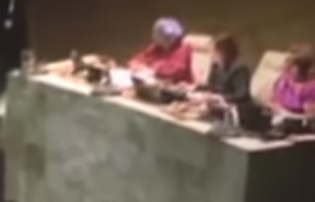 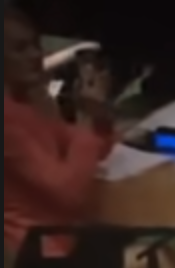 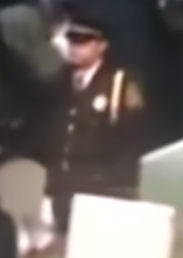 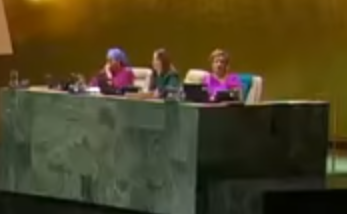 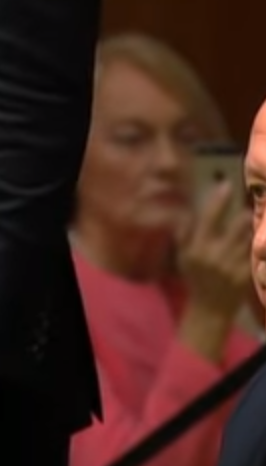 If you look at all the mannerism and movement they're identical. The way that the man in teal tie prompts the Turkey president to stand to the the podium is the same exact as in the 2019 fake, in addition the woman in pink takes her phone the exact same way as in both videos.

In addition to that, you can actually purchase a licence for the video of the president from the perspective of the bleachers.

From the Anadolu Agency:

AND the video was uploaded on 25th of September 2018 which, again, predates the fake from 2019

That pretty much debunks the entire ordeal, I think it was a publicity stunt by the her to give her company attention. In addition to the empirical data, there are logical reasons why this doesn't make sense. There's no reason such a ground breaking announcement would be told by someone who (no offence to her) is largely unknown, the way it was presented too, the assertion that its "first contact" yet the UFO is still unidentified just makes no sense and seems like a poorly written script. Also, if there was no filming allowed (which, I don't know much about UN, do they do that?) yet the woman in pink pulls out here phone with everyone seeing her pull it out and take a picture and no one does anything about it despite the warning at the beginning. Also, the way the camera is positioned from the bleachers, it's obvious it's not a hidden camera, it point blank shoots at the speaker, anyone would be able to see that.


In addition, the fast radio burst that was mentioned is so far away that it would be physically impossible for an ET to travel to earth from that far away as the FRB is estimated to be about 1.5 billion light years away


The astronomers estimated that the new repeater is about 1.5 billion light-years away, roughly half the distance to the other repeater.


So yeah, it's pretty much conclusively debunked, there are just two unknows I guess. The motive (which I think is a publicity stunt as this gave the woman a lot of traction when this came out) and the way it was edited. I'm aware that deep fakes exist but it looks like pretty high quality CGI edit, what do you guys think?

Just found out that UFOinterest debunked this when it came out, kudos to them for debunking it! Doing great skeptic work. I'll link the original tweet and video as they do a bloody good job showing the how identical the videos are.

Also, when you see the comparison in that tweet you linked, it is very easy to see the light illuminating the lady is much brighter compared to the rest of the stage.

ParanoidSkeptic2 said:
Around January-February of 2019, a "leaked" video was published online of a woman speaking about how earth has made first contact with extraterrestrials. The following is the video in question, I'll transcribe it below.
Click to expand...


The video is fake, there's logical as well as empirical reasons for it. The main reason that it is fake is the fact that the video itself is real but Aliya was added as an edit. The original is of Recep Tayyip Erdoğan (President of Turkey) from 73rd UN session that took place on the 25th of September 2018.
Click to expand...

I think I very much appreciate your efforts. Nicely done. I am a 25 year SETI number cruncher. If ever we find anything it will be so heavily leaked that nothing could hush it up - I am pretty sure NASA is the same leaky beast.
Last edited by a moderator: Mar 6, 2021
You must log in or register to reply here.