Staff member
A YouTube user by the name of "scumline" posted a video yesterday (Jan 22, 2013) titled: "fireball u.f.o. missle over orange county , california",
​
with the description:

Published on Jan 22, 2013
driving down the road saw this in the sky. i think it was a missle, but never really heard what it was.

scumline 17 hours ago
it was a couple years ago, just was going through old tapes and found it.

Unfortunately this was picked up by some alternative news sources, who missed the comment about it being a couple of years ago and was described as happening on "Monday Night", example:
http://news.gather.com/viewArticle.action?articleId=281474981841340


What was streaking over the skies of California on Monday night? Probably not a UFO, but the sight was spooky enough to cause alarm. Is the government firing missiles over populated areas without warning?

In a video posted to YouTube on Tuesday, a streaking, unidentified flying object was caught by a motorist on a highway in Orange County, Ca. The object resembles a missile with a fiery plume leading the way and a disjointed, smoky tail bringing up the rear.
[...]
Anyone looking at the video can tell it's probably a man-made object. But why is a missile being launched over such a populous area? Isn't that extremely dangerous? Doesn't the public deserve a warning? What would happen if the missile struck the ground?

It clearly is a rocket lauch, and it's not an uncommon sight in Southern California. Rockets are launched quite often from Vandenberg Airforce Base. The rockets (in this case a converted minuteman missile) do not go over any populated area, they go out over the sea. The rocket trails are visible from hundreds of miles away.

In fact, this rocket is from September 22, 2005, a video of which was filmed from Lancaster, CA, which is about 80 miles to the north of South Orange County:

If you compare this 2005 Lancaster footage with the "new" footage from scumline (which he described as "a couple of years ago", you can see they are basically identical, if you account for them being viewed from slightly different angles.

Here the top image is from the confirmed 2005 lancaster video, the middle image is the same 2005 image stretched out, and the bottom image is the "new" video. 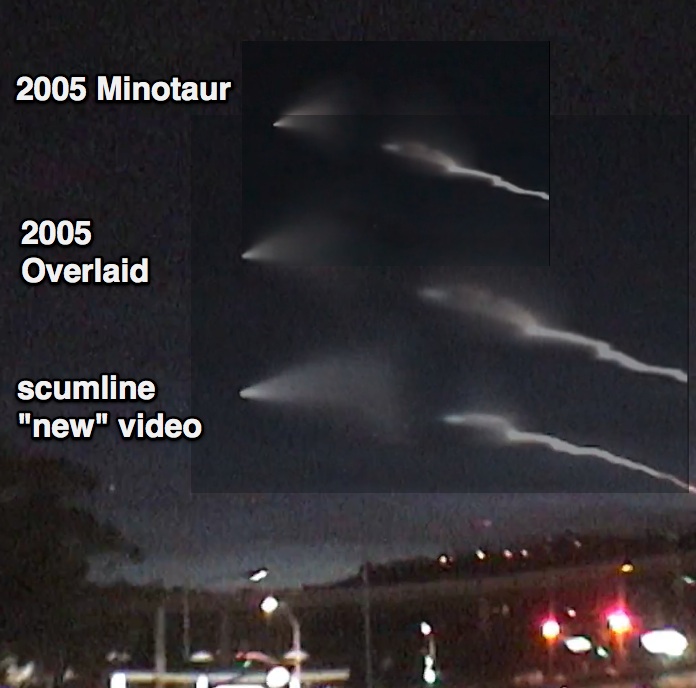 And when considering the lower sections, it seems almost certain it's the same trail. The distortions are due to wind shear, which gives a kind of fingerprint of the atmosphere on that date. The lower coloring (due to passing though the sunset portions of the atmosphere) also matches as a time stamp fingerprint. 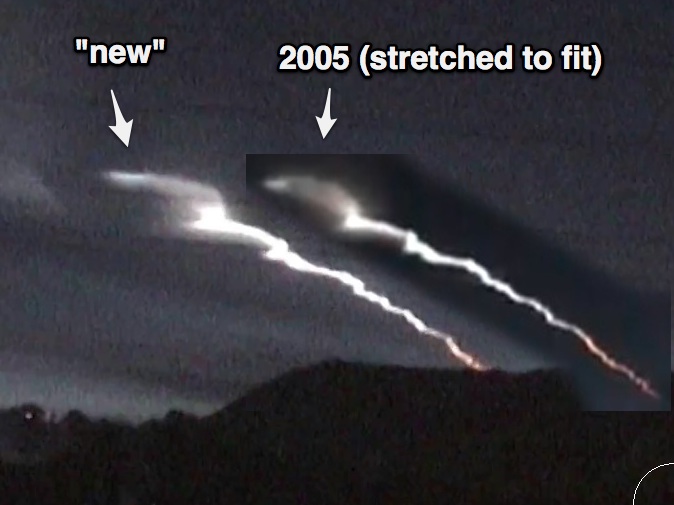 Where the trails seem not to match is due to the viewpoint, Lancaster vs. South Orange County. 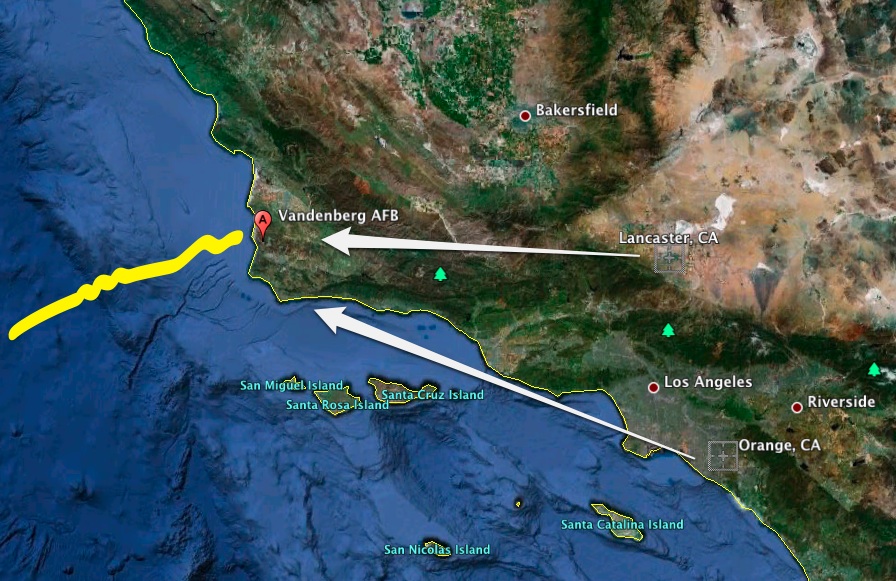 And if that's not enough, here's a photo from Sept 22, 2005, taken from Huntington Beach in Orange County. It shows the same trail as in the "new" video. 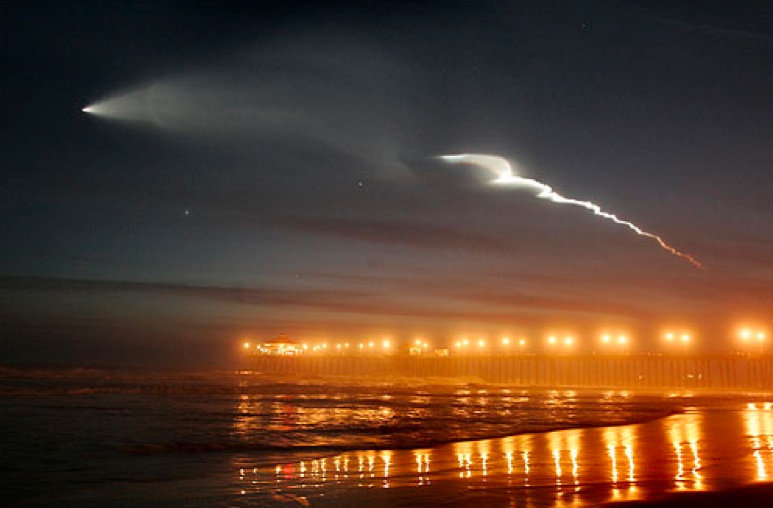 And another from Borrego Springs, which has a similar view angle to South Orange County. 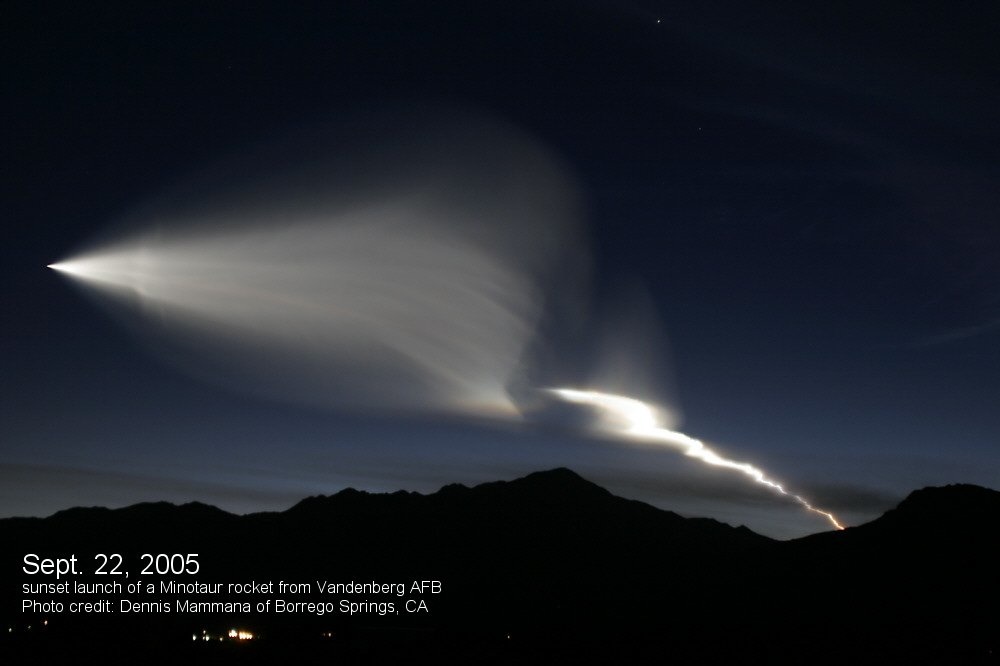 Is it so bright, because it so high (altitude), and the sun is hitting the trail, even though the sun has dipped below the earth's (sunset) shadow ??

Stupid said:
Is it so bright, because it so high (altitude), and the sun is hitting the trail, even though the sun has dipped below the earth's (sunset) shadow ??
Click to expand...

Yes. The easiest way to tell the difference between a plane's contrail and a rocket/missile trail is that a contrail is all the same color, as it is at a constant altitude. But a rocket trail at dusk is white at the top where it is in sunlight, and has a spectrum of colors lower down as it passes though the atmosphere, as it's travelling more vertically.

Really cool! I'd love to see a launch in person some day.
You must log in or register to reply here.