Debunked: "Tip Top" as a QAnon Clue from Trump [He's said it before]

In the recent media coverage of the "QAnon" conspiracy theory that followed some Q supporters showing up at a Trump rally, one of the pieces of evidence that the Q supporters gave on camera was the idea that Trump said "tip-top" because a Q made him do it.

This actually seems quite compelling as a sound bite on TV. There's the post on 4Chan with an anonymous user asking Q to work "tip-top" into a Trump speech, this is immediately followed with a clip of Trump saying "tip-top". There's even a bonus white rabbit (a reference to the "rabbit hole" in "red-pill" modern mythology).

But it all falls apart when you look at the actual context. Here's a timeline of Trump saying "Tip Top" (or "Tippy-top") and 4Chan/QAnon talking about it. Note the dates.

Trump: "I’ve got the best people! The best! I mean, where do you get these people. I know where to find them. This country will be in tip top shape once I take over. I mean, I don’t know anything about running a country, but I’ve been pretty damn good about running my company. We’ve got the best company in American. I am worth billions of dollars!"​
Aug 12 2016 - Campaign rally in Altoona, Pennsylvania

Trump: "I want this, our nuclear arsenal, to be the biggest and the finest in the world. And we spent a lot of money, a lot of time, and a lot of effort. And it's in tip-top shape and getting better and getting stronger."​
Oct 11, 2017 - Remarks Prior to a Meeting With Prime Minister Justin P.J. Trudeau of Canada and an Exchange With Reporters

Trump: "We won't need an increase [in our nuclear arsenal], but I want modernization, and I want total rehabilitation. It's got to be in tip-top shape."
​
January 29 2018 - Anonymous Post on 4CHan

[no mention of "Tip Top", but does mention the nuclear arsenal]
"As part of our defense, we must modernize and rebuild our nuclear arsenal, hopefully, never having to use it, but making it so strong and so powerful that it will deter any acts of aggression by any other nation or anyone else. "​
April 2, 2018 - Remarks at the White House Easter Egg Roll

Trump: "Also, I want to thank the White House Historical Association and all of the people that work so hard with Melania, with everybody, to keep this incredible house or building or whatever you want to call it—because there really is no name for it; it is special—and we keep it in tiptop shape. We call it sometimes tippy-top shape. And it's a great, great place."
​
April 2, 2018 21:03:57 - Q takes credit

It was requested.
Did you listen today?
Q​
Trump has used "tip-top" twice before in official remarks, and in both cases in reference to America's nuclear arsenal. At the State of the Union speech he would have been expected to talk about the nuclear arsenal, and it would have been entirely unsurprising if he used the same phrase as he had used before to describe the arsenal. In fact it's quite possible that the Anonymous poster had deliberate picked this phrase because he thought that Trump might use it. If, as most people suspect, Q is just a troll, then he quite possibly planted the "request", hoping Trump would repeat himself. As it happened he did not, so the request fell flat.

And then, two months later, Trump used the phrase at a random event, in a seemingly unscripted off-the cuff remark about the White House, and how clean Melania keeps it. He was simply using a phrase he uses occasionally, and will use again at some random time in the future that will then be seized up as being significant. But it's not.
Last edited: Aug 11, 2018

Staff member
"Tippy-top" is also a phrase Trump has used before in similar context regarding nuclear weapons.
https://www.washingtonpost.com/blogs/post-partisan/wp/2016/06/16/trump-called-russias-nukes-tippy-top-heres-why-it-matters/?utm_term=.45b84066b9c1 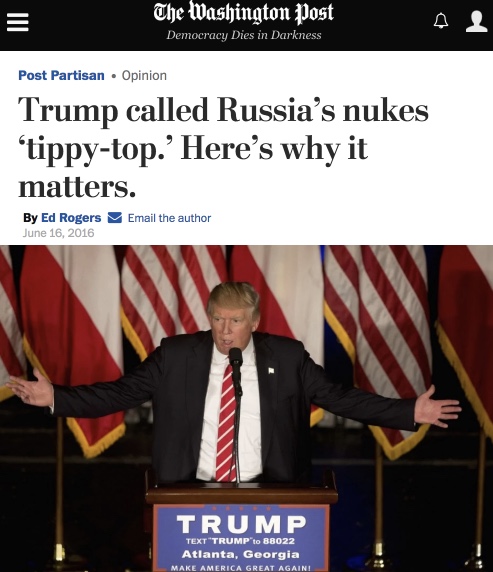 And to describe buildings, like at this rally in Altoona, Pennsylvania, Aug 12 2016
Source: https://youtu.be/CFz51NcVBhQ?t=1h1m26s

Staff member
and at least reporters use it when describing maintenance (or lack of, which would bother Trump and stick in his head) to describe Mar-a Largo:

It looks really bad and usually it is completely well manicured. It might even have been taken after a hurricane. One thing about Trump’s properties – he is emphatic about keeping them in tip-top shape – so this is not typical at all

President Donald Trump may be using his office to draw attention to Mar-a-Lago, in what ethics experts describe as a conflict of interest, but that doesn't mean he cares that much about making sure the food at his luxury resort is in tip-top shape.

“When I’m President, I’m going to make sure that every park in the country gets renovated in three months. And they will all get reasonably sized bathrooms. I’ve got the best people! The best! I mean, where do you get these people. I know where to find them. This country will be in tip top shape once I take over. I mean, I don’t know anything about running a country, but I’ve been pretty damn good about running my company. We’ve got the best company in American. I am worth billions of dollars! Billions! Just read my financial reports.

This is one of the conspiracies I've been hoping to see on here. A family member of mine will go on and on about Q and how America has no idea what is coming. For the entirety of this year I've been waiting for the "20,000 seal indictments" to be release and all the DC pedophiles and traitors to be put in prison in Gitmo, but it still hasn't happened.<--Another one of Q's prediction.
I am looking forward to more debunks of the Q conspiracy.
You must log in or register to reply here.
Share:
Facebook Twitter Reddit Pinterest Tumblr WhatsApp Email Link