Debunked (sort of): Picture of LEO spraying a child with Mace

This picture (see below) has been making the rounds on Facebook. Someone, somewhere, has decided that they'd like to stir the race pot instead of trying to help quell the situation: 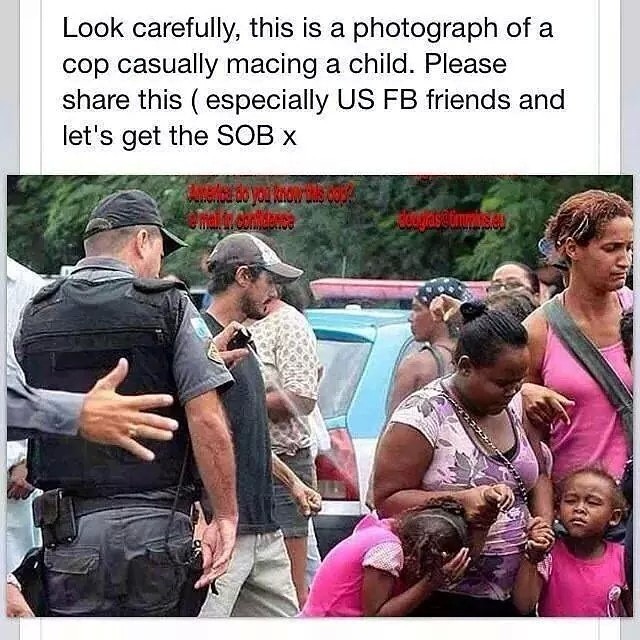 To be quite honest, I was taken in by the photo at first... just goes to show how difficult it really IS to determine nationality in humans (go figure huh?).. it wasnt until I saw the squad car in the background that I realized something wasnt right.. its not an American Police Vehicle. That also brought my attention to the flashes on the arms and the types of vests the cops were wearing. So I ran the photo through google image search and came up with the links listed below. From what I can find, this is actually an incident dating back to 2011 in Brasil. The picture itself is real, the incident it shows actually happened, but the context has been changed and the picture(with caption) was being released during a time of racial tension because of the Ferguson shooting.

as well as another site that already debunked the context of the picture as seen above.

I should also add, that upon further research, it appears that the chemical in question being sprayed isnt MACE but pepper spray. Chemically speaking, they're two very VERY different substances but MACE is used colloquially like Band-Aide, Kool-Aide, Coke and Tylenol for adhesive bandages, sugary kids drinks, soft drinks and pain killers.

Here's an infographic from the Berkley PD on the subject:

In short, Pepper Spray is OC Spray or oleoresin capsicum, which is one of the main ingredients of spicy peppers (like Jalapenos). MACE, which if I recall correctly is actually a brand name, is made of CN or Phenacyl Chloride suspended in a hydrocarbon solution and sprayed from a canister. OC or pepper spray is sprayed from a small tube, like in the picture above.
Last edited: Aug 16, 2014

Analysis: Sadly, the photograph is real, though the location where it was taken is often misstated. It's a press photo shot on March 23, 2011 during a public protest in the city of Niterói, Brazil (part of the Metropolitan Region of Rio de Janeiro) by Peter Kirilos of O Globo (The Globe), Rio's largest daily newspaper.