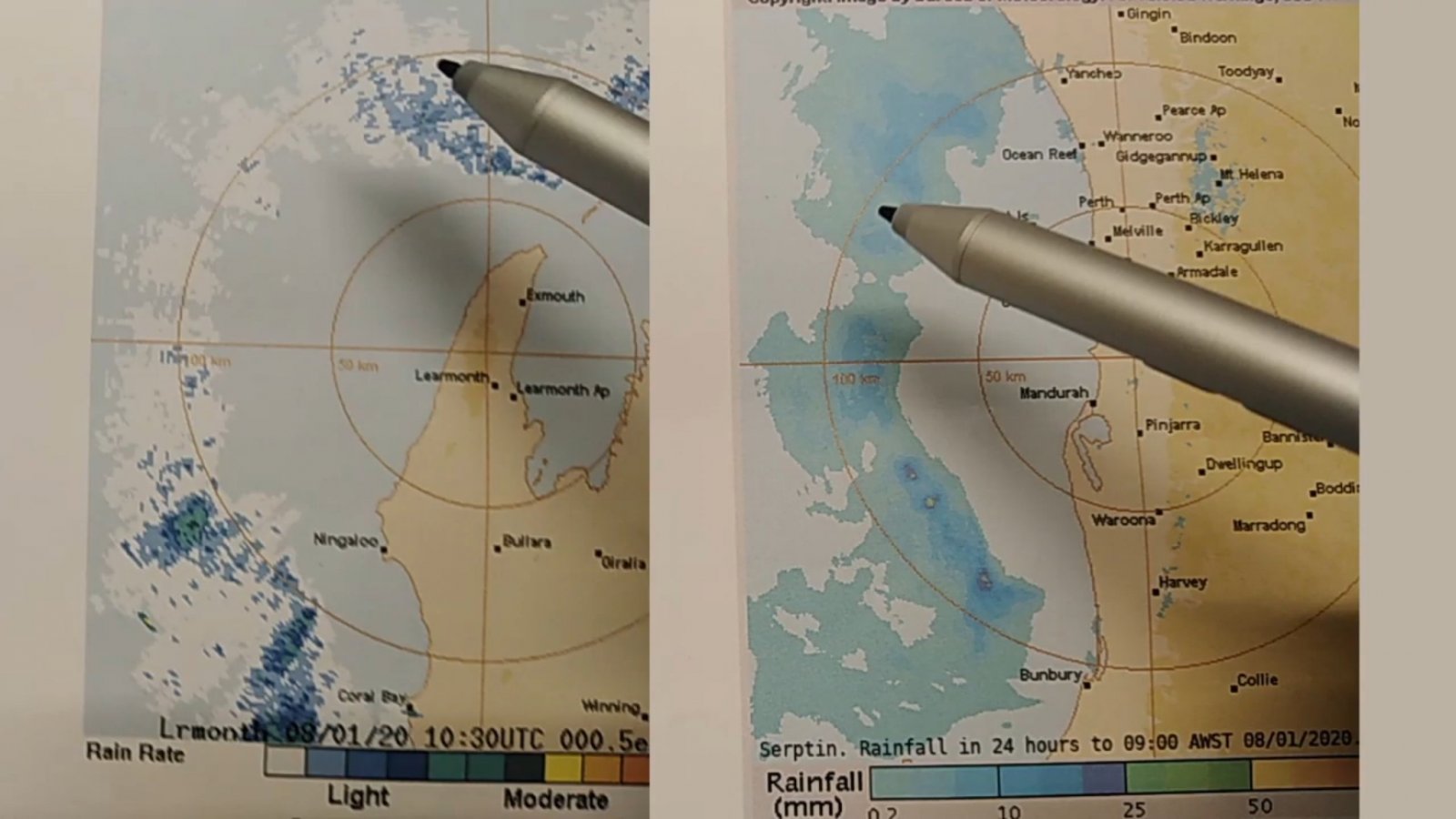 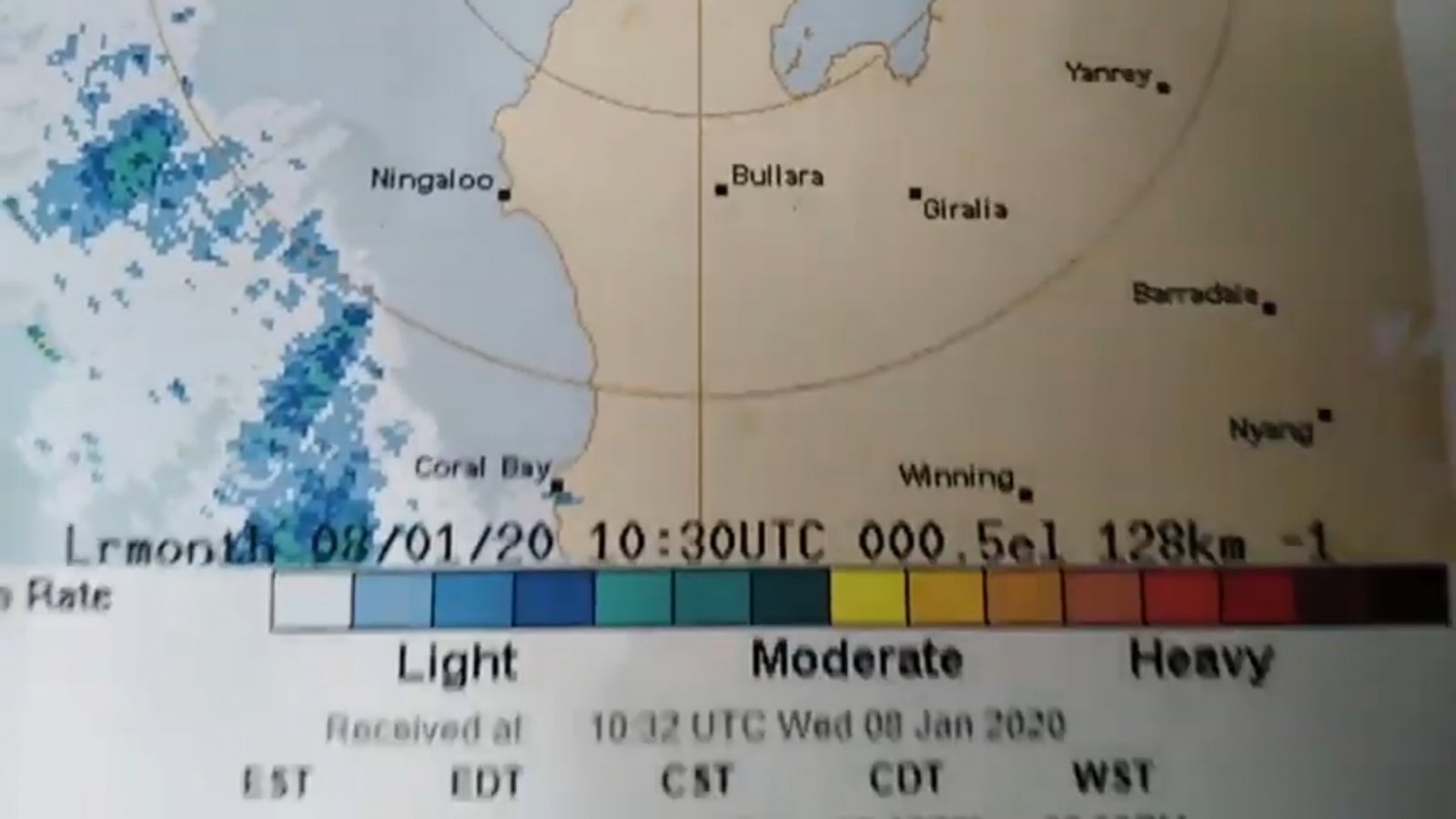 [1:40] If radio waves and radar haven't got any effect, pretty coincidental these two different areas in Western Australia pushing the clouds out or stopping them from coming in, whichever way it goes.

The radar images in the video come from the Australian Bureau of Meterology.

Meteorological Aspects
On the 27th of October 2008 the Bureau installed a C-Band radar at Broome airport, replacing the existing WF 44 radar. The introduction of this new more sensitive radar has led to a number of occasions where "false" or anomalous echoes have been displayed.

This is not caused by a malfunction in the radar, but rather is a result in the increased sensitivity of the radar.

Radar works by sending pulses of electromagnetic energy (in the form of waves), which are then reflected back to the radar by objects in the path of the wave. The radar beam follows a slightly curved path and goes progressively higher the further away from the radar it travels, until it hits an object in its path usually rain droplets.

In the Broome area it is quite common for strong temperature inversions to occur, which means the temperature actually increases with height over a small distance in the atmosphere instead of steadily decreasing with height. There are a number of reasons why inversions can happen, and in the Broome area, one of the most common examples is when hot air from the inland moves out over the cooler ocean. This leads to marked temperature inversions close to the surface, and the effect of this inversion is to "trap" the radar beam in the layer of air between the cool ocean and the hot air a couple of hundred metres above it. Because of the change in the refractive index between hot and cool air, the radar beam is "bent" back towards the waters surface. When the beam strikes the water it reflects its energy back to the radar and it is that image which is displayed on the radar picture.

In certain circumstances the inversion can be strong enough such that displays similar to the one below occur. 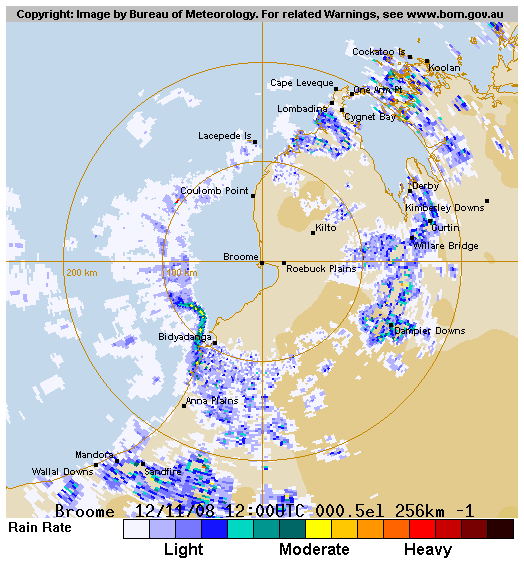 This phenomenon is the price to be paid for increased sensitivity which means that rainfall and thunderstorms are much better depicted by the radar. With practice it is quite easy to recognise the difference between real and anomalous echoes.

From the same page:

Perth (Serpentine) Weather Watch radar has good coverage in all directions. Intense thunderstorm or cold fronts can be seen up to 250 kilometres away, however at this distance the radar is sensing the structure of the system well above the ground and may give a misleading view of the actual surface rainfall intensity of the system. The radar is susceptible to anomalous propagation (AP) for distances up to 60 kilometres along the coastline and seaward of it. The AP appears as an area of low intensity echoes. A local phenomenon which has been observed occasionally is that of false mirror echoes approaching the radar from the southeast as an intense cold front approaches from the south west.Heavy rain directly over the radar site can cause attenuation of all signals. Path attenuation can also occur when the radar beam passes through intense rainfall, with the returned signals from cells further along that path reduced.

In January, Australia (especially Western Australia) was hot and dry, remember the bush fires? That's another indication that these "clouds" weren't really there.

Note that there was no rainfall observed on and around the 8th, and cloud cover was 0/8 to 1/8 only. 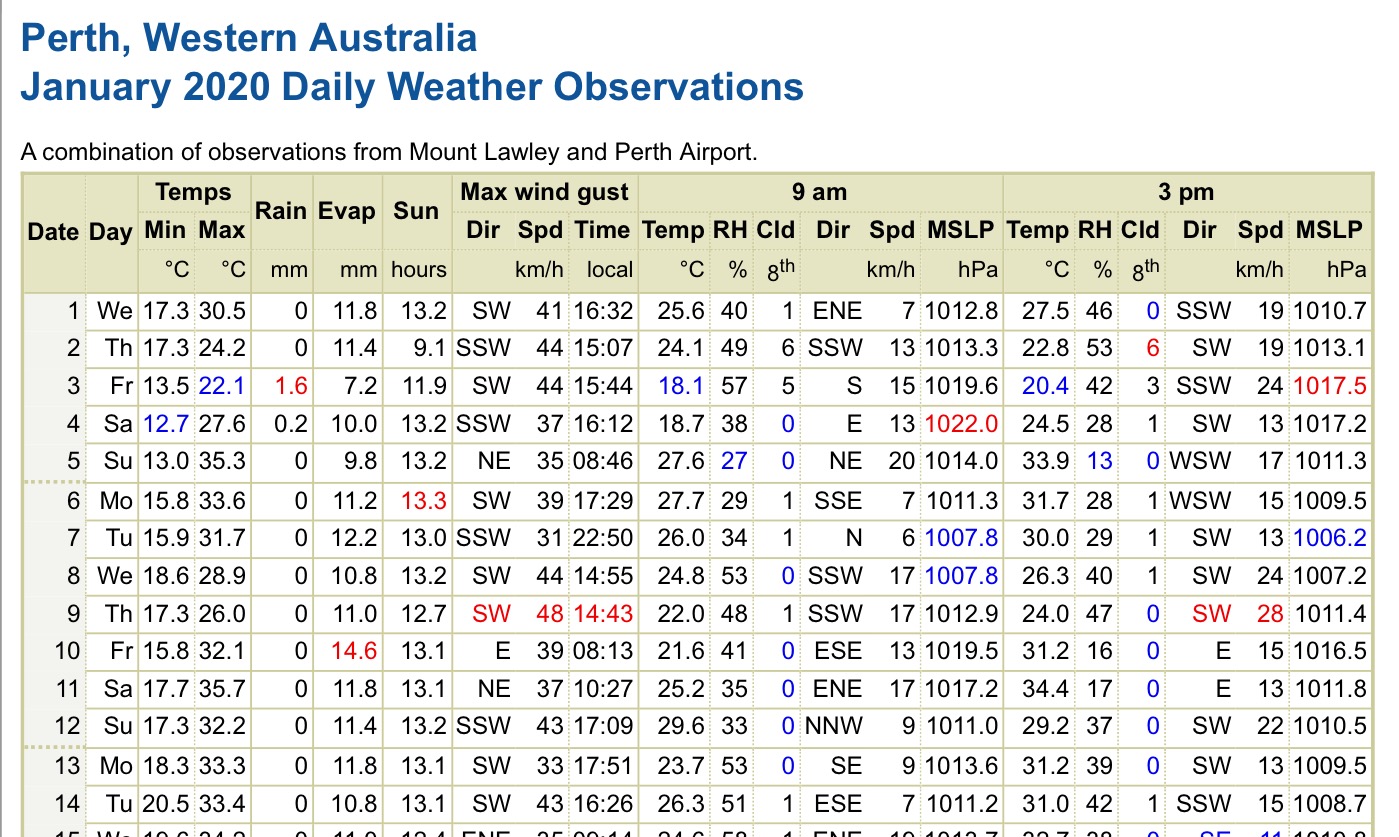 Observe that the West coast was dry the whole month.

I didn't look for a satellite image, but the times are logged on the images in the screenshot from the video, so it'd be easy to check if you have access to an archive.
Last edited: Apr 18, 2020
C

Hey guys can you help me out on identifying anomalies on Doppler weather radar? There is a Space Command radar within about 15 miles NE of me but I do not think that is causing the glitches I see. There is a weather radar about 30 miles away to the East and North near the Chattahoochee river that I can not find info. on. I see squares or rectangle on radar usually lasting either 6 minutes or 12 to 13 minutes then they disappear.

On the third and fourth photo I went outside to look. The weather radar said no rain but I looked up it was overcast and heard thunder coming from the area of the rectangle. One night three of the rectangles looked like they were moving in a search pattern?

Chadenim said:
Hey guys can you help me out on identifying anomalies on Doppler weather radar?
Click to expand...

I'm sorry, I don't understand what the source of your screenshots is. What radar images are you watching, and where exactly is this?

You can see that the Doppler system is located in the center of your Ponce De Leon screen cap because of the radial nature of the clouds. Raw weather radar requires a lot of processing for easy interpretation.

What App are you using? The data appears to be fairly raw, which tends to produce rectangles and ghosts. Highly processed data smoothes out the edges by comparing reflections in adjacent cells and flagging them on a scale instead of just “cloudy” or “not”. It’s more complicated than that, but get the general idea. Some Apps have an option to turn smoothing on or off and most of the small and square clouds vanish when you turn it on.

Anyway, a small intense storm will show up as a rectangle when the “pixels” are flagged as cloudy or not. Ghosts are reflections that aren’t there, or are in the wrong place, as in the OP.
You must log in or register to reply here.