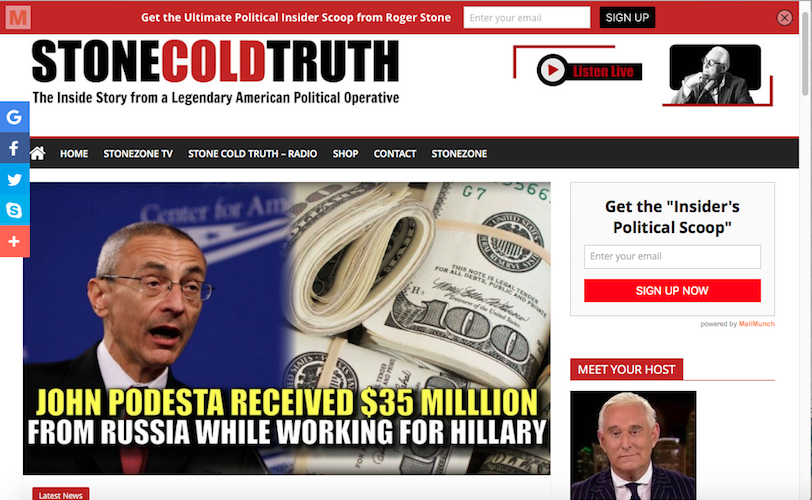 A number of websites, led by Roger Stone, are claiming that former Clinton White House official John Podesta received $35 million from a Russian company while working for Hillary Clinton and president Obama.
https://stonecoldtruth.com/podesta-received-35-million-from-russia-while-advising-clinton-and-obama/

A careful examination of the facts, already made by a number of media outlets, reveals that Podesta received no such money and, although carefully skirting existing federal law, did not violate it.


John Podesta, former Secretary of State Hillary Clinton’s 2016 national campaign chairman, may have violated federal law by failing to disclose the receipt of 75,000 shares of stock from a Kremlin-financed company when he joined the Obama White House in 2014.

The outlet also states that Podesta appears to be linked to a $35 million transaction between a Kremlin-funded company and a company he sat on the board of.

As usual, Stone went big with his headline and immediately backtracked in the text that followed it.

The “outlet” that Roger Stone’s website cites is none other than Breitbart, which published essentially the same story back in March of this year.
http://www.breitbart.com/video/2017...etails-john-podesta-may-violated-federal-law/


Did Podesta receive $35 million dollars from a “Kremlin-financed company”?

Prior to joining the Obama administration, Podesta was on the board of Joule Unlimited Technologies from 2010 to 2014. Joule developed “commercial-scale production of ethanol made from carbon dioxide,” according to the McClatchy News Service.

During that time, Rusnano USA, the “Kremlin-financed company” Stone refers to, invested $35 million in Joule. Overall, Joule received approximately $200 million from outside investors. The parent company of Rusnano USA is JSC RUSNANO, which is a Russian state enterprise.
http://www.mcclatchydc.com/news/politics-government/election/article109203877.html

So, Podesta never received $35 million dollars while he worked for Obama or Clinton. His company did when he was a board member, from another company that was controlled by the Russian government.

The Huffington Post looked into this issue in March right after the Breitbart story.

Before leaving Joule in December 2014 to become a special advisor for the Obama administration, Podesta received 75,000 shares of common stock from the company, which he then transferred to Leonidio Holdings, a Delaware-based corporation managed by his daughter Megan Rouse.

Podesta never claimed these stocks on his disclosure forms (attached) because, according to federal law, he was a “new entrant” into federal service, even though he had served in Bill Clinton’s White House from 1993 to 2001. The Huffington Post even found the relevant statute (my emphasis):

(a) In general. Except as indicated in § 2634.308(b) of this subpart, each financial disclosure report filed pursuant to this subpart shall include a brief description, the date and value (using the categories of value in § 2634.301(d) of this subpart) of any purchase, sale, or exchange by the filer during the reporting period, in which the amount involved in the transaction exceeds $1,000:

(2) Of stocks, bonds, commodity futures, mutual fund shares, and other forms of securities.

3) Any transaction which occurred at a time when the reporting individual was not a Federal Government officer or employee need not be reported under paragraph (a) of this section.


So, Podesta did not violate federal law. He is part of a larger problem in our country where former, high profile officials take advantage of the revolving door between government service and the corporate sector, and help shape the law to protect it.

Unethical? Probably. But not illegal and definitely not something with a $35 million personal payday.

Hey eh, i know im new here, but how did you "debunk" anything? The screen cap of the article doesn't say it was illegal ( idgaf about reading the article), you admit he did receive 35 millions and WikiLeaks emails show he did directly receive them, through his company yes, but it's written black on white that he did get the shares, personally. Here :


> Accordingly, I dug back further and confirm that the original terms were for a 4 year vesting schedule of which John was ¾ vested (this reflects what John actually exercised – i.e. 75,000 out of 100,000 options). The 4 year schedule is reflected in the “offer” letter which our previous CEO sent to John and John signed and sent back. It is also reflected in the Board minutes where John’s grant was approved.

The title you're debunking being, "Podesta Received $35 million from Russia". Let's look at your debunking:

1. Podesta was specifically mentionned as the benefactor as per Wikileak email proves.
2. It was 35 million $ in shares.
3. It was from a state owned Russian company.


So IDK what you proved here, that he tried to hide it by using a bunch of companies? How is that debunking anything? Is there something im missing here?
Last edited by a moderator: Aug 28, 2017

putneg said:
you admit he did receive 35 millions and WikiLeaks emails show he did directly receive them, through his company yes, but it's written black on white that he did get the shares, personally. Here :
Click to expand...

He did not get the shares personally. He exercised some unrelated stock options. The meant he bought shares in Joule at a discount (a common form of executive compensation, vesting over time).

A company he was at benefited from a Russian investment. He probably benefitted a bit in the increase in value of his stock options. However that's totally different to simply getting $35 million.
P

Ah, yes, I understand better now relating to the stocks.

Still, he joined merely months (dec 2010) before the russia deal and "left" the moment this 4 years were done. I say "left" because the company never actually existed after 2012. Their website is down, there is no news about them since 2012. This is a bit weird from a company that received over 200m$ in investments (and the office was in a business park, lol). I guess no one cared that their 200m$ went up in smokes.


They did get the 35m$ russian money deal during his tenure, he did profit from it and he did send the money to himself through his daughter so I feel saying it's debunked isn't super accurate.The only debunked part is that it wasn't 35m to him but to the company he managed and profited from. The most important part, that he profited off russian investment in next gen energy production (if it wasn't just a money laundering front, which it looks like it is). I'm not saying he should be jailed for it, it's all legal, I'm just a bit weirded out that it is "debunked" when the important parts are true, which is more Russian investments in US energy sector. Which strategically cannot be good if that nation supposedly "stole the elections".

So if title was "Podesta allow and profits from Russian investments in alternative energy then use loophole to be allowed in a government position" we would say it's true, right?

putneg said:
I say "left" because the company never actually existed after 2012. Their website is down, there is no news about them since 2012. This is a bit weird from a company that received over 200m$ in investments (and the office was in a business park, lol). I guess no one cared that their 200m$ went up in smokes.
Click to expand...

are you looking up the wrong company? it's Joule Unlimited.

putneg said:
So if title was "Podesta allow and profits from Russian investments in alternative energy then use loophole to be allowed in a government position" we would say it's true, right?
Click to expand...

Arguably. But this thread is about the claim that he received $35M from Russia. He did not, so that's it.
You must log in or register to reply here.