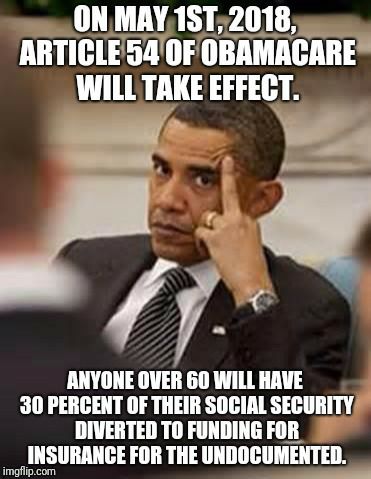 A meme from a Facebook site “America-Love It or Leave It” came out this weekend claiming that Social Security recipients will be losing a significant part of their benefits to undocumented immigrants.
https://www.facebook.com/lovetheusa...698153799112/2099766766925582/?type=3&theater

The claim is absolutely false and easily researched by simply taking a look at the actual Patient Protection and Affordable Care Act (or “Obamacare) of 2010. The law does not contain an “Article 54” in it. It is organized into titles and sections, like most other federal statutes. It is attached.

Unfortunately, the meme is pretty popular. The Facebook page lists over 20,000 shares, although many of the comments on the page are pointing out the false claim.

A number of sites have also picked up the meme and are debunking it.

The post was published on April 14, 2018 (archived here) with no extra text to accompany the image.

However the Facebook page that posted it has following description in its about tab:

"Nothing on this page is real. It is a collection of the satirical whimsies of liberal trolls masquerading as conservatives. You have been warned."

Should you doubt that, you can read the full text of the Patient Protection And Affordable Care Act here, since

Thanks for the catch on the real nature of the FB page deirdre.

Like many posts like it, I had a relative forward this to me thinking it was absolutely true. Yikes

MikeG said:
Thanks for the catch on the real nature of the FB page deirdre.

Unfortunately many people don't even care if they share fake news. I've had 3 people tell me that this week. They say "if you don't like what I post then unfollow me". They do leave my debunks up though (so far) and if I thought every one read comments that would make me feel better.. but I've seen a lot of evidence as of late that people don't even read the comments.

Anyway, here also is the gov link to who is eligible for federal Obamacare. Not even DACA 'kids' are eligible, which I have to say is kinda surprise to me. I assumed they were at least temporarily.

Content from external source
so WHY illegals would suddenly get insurance next month with Repubs in charge (and Fox News not all over that!!) .. that is a pretty far out 'meme' to believe.
You must log in or register to reply here.

Debunked: Public Law 105-85 Allowing Testing of Biological and Chemical Weapons [It's the Opposite]