Max Bliss is using this NACA report from the 1950's to assert that aluminium can be used in jet fuel. 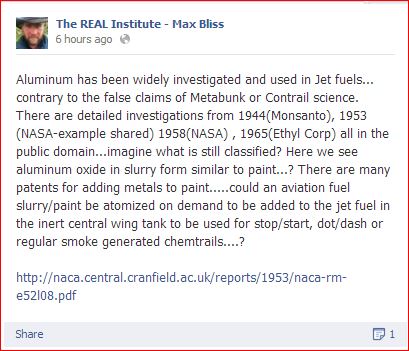 Apart from an inexplicable reference to the use of centre wing tanks, taken directly from the hoax he fell for in 2013, his posts exhibits classic cherry picking as he ignores the key fundamentals of the report.

1. The report is intended for high speed aircraft using either ramjets or afterburners on turbo-jet aircraft. No current aircraft capable of carrying the weight of aluminium as a spray chemical has either of those sorts of engines. 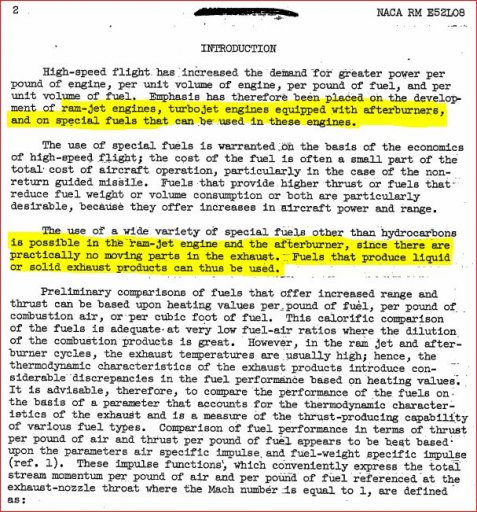 Of note in the second highlighted portion is the reference to the fuel only being suitable for use in ramjets and afterburners as they have practically no moving parts.

The solid nature of the exhaust products of these fuels, Al2O3, has been discussed elsewhere on this forum. Al2O3 is used in sandpaper. It is almost as hard as diamonds. It has no business in a turbo-fan engine. Its use would destroy the turbine blades with catastrophic results.

The report also states the combustion temperature of aluminium.

The R is for the Rankine scale, which is the fahrenheit version of the Kelvin scale. 6163R converts to 3151C. That temperature in a modern turbo-fan engine combustion chamber would result in catastrophic failure of the turbine.

Someone with better chemistry skills than I can calculate how much aluminium oxide could be sprayed via this method as a proportion to the fuel used but I suspect it is trivial.

Max, we know you read this. My suggestion is for you to go and get some education on aviation and meteorology before you make a fool of yourself again. Your technical knowledge is woefully deficient. You quote aspects of the hoax that you fell for as though it didn't happen and as if the debunking community has forgotten. We haven't.

You pointedly refuse to correct others like Jack Baran who also extensively quote the hoax as if it didn't happen and has some basis in fact. It doesn't. It is a total fabrication obviously designed to make you look foolish. I cannot understand why you would perpetuate it.

The photo below is graphic evidence of what happens when a turbine overheats. It was caused by small quantities of engine oil leaking from a pipe, burning and overheating a turbine. It almost killed 450 people save for the skills of some people I know and have flown with. 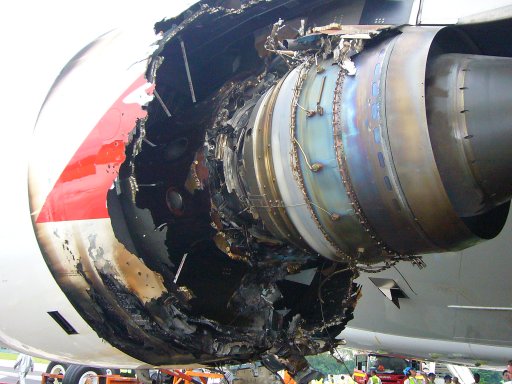 (And without cluttering up by repeating the entire excellent thing)...there is another problem with the notion of some "additive", such as aluminium (of any form) directly into the Jet-A1 fuel. It has to do with several factors, one already covered is the incredible fact that such material would VERY quickly destroy a modern High Bypass Turbofan engine.

However, I'll focus on the subject of density.

Any fluid (and Jet-A1 is no exception) will have a specific gravity dependent upon its temperature. The range of this measurement is fairly minor, in the operating temperatures we encounter in airline operations.

Some people not familiar with aviation, and especially with jets, do not understand how fuel quantity is actually measured, on the jets. Unlike one's automobile fuel tank, with a "float" or some such device...airliners' fuel tanks use a multitude of density sensors, located internally. Depends on specific models of jet, but there are always more than one "transducer" (a generic term to describe the capacitance transmitters) to measure the specific gravity, and they utilize various methods designed into the software to thus determine the quantity, in a weight measurement format.

For operators in the USA, the units used are pounds. Most other countries use kilograms. In either case, however, ANY significant alteration to the make-up of the fuel itself, via the addition of some foreign material, will result in throwing off the calculations.

It's important also to note: Whenever fuel is uploaded, there are a serious of double-checks performed, by the pilots, and for any overseas flights, also by maintenance personnel. The "fueler" provides their paperwork to indicate, in volume (either gallons, or litres, as appropriate) the uplift quantity. This can then be checked, using simple math, to add a measure of verification to the displayed fuel quantity, as indicated on the Flight Deck. Also, this same information is entered into most modern jets' FMC (Flight Management Computer) systems, which ALSO does the math calculations, AND will generate an "alert" if there is a significant mis-match.

Of course, I could also mention the multitude of very fine-mesh fuel filter screens within the system, from tanks to engines...as well as the very sensitive FCU (Fuel Control Unit) that is the last step before the fuel is injected into the injectors for combustion.....but, that may need another several pages.
Last edited: Mar 5, 2014

WeedWhacker said:
Some people not familiar with aviation, and especially with jets, do not understand how fuel quantity is actually measured, on the jets. Unlike one's automobile fuel tank, with a "float" or some such device...airliners' fuel tanks use a multitude of density sensors, located internally. Depends on specific models of jet, but there are always more than one "transducer" (a generic term to describe the capacitance transmitters) to measure the specific gravity, and they utilize various methods designed into the software to thus determine the quantity, in a weight measurement format.
Click to expand...

cloudspotter said:
I guess someone could argue that it would be possible to change the software code to take into account the change in specific gravity
Click to expand...

Well....they could try to "argue" that. However, perhaps I didn't emphasize that we all use math....for the U.S., it's an average of 6.7 pounds per gallon for Jet-A1. This is at Standard Temperature. The actual range, IIRC, is 6.5 lbs/gal in warmer temperatures, to 6.9 in very cold. Of course, those who work in litres and kilograms have their own figures to use...hang on...looked it up online. One litre = 0.79 Kg

I'm sure that "TWCobra" is familiar with Ltrs & Kgs. Even (oh, so many years ago!) when I was flying the little commuter turboprops, we had an "in-your-head" gouge for the U.S. pounds/gallons conversion...and I can't for the life of me remember it, it's been so long! (**)

When flying the commuter turboprops, we'd have to plan our fuel for the next leg (we did our own "dispatching"). So, we'd tell the station, on the radio, how many gallons we'd need when we arrived. BUT, we wanted the quantity in pounds...so, the "rule-of-thumb" gouge was: Pounds desired, divide by 10, then add half of that number.

Changing the specific gravity artificially means the pilot would be unaware of the true weight of the aircraft. That is totally incompatible with safe operations.

It would mean that the aircraft was much heavier than the pilot realises; affecting all the performance calculations necessary for safe flight.

TWCobra said:
Changing the specific gravity artificially means the pilot would be unaware of the true weight of the aircraft. That is totally incompatible with safe operations.

It would mean that the aircraft was much heavier than the pilot realises; affecting all the performance calculations necessary for safe flight.
Click to expand...

True as well....I guess my emphasis was on the fact that it would be immediately noticed. Not to disregard, also, the incredible amount of scrutiny that aviation fuels are subject to, to eliminate the possibility of contaminates. From refinery, to distribution, to delivery...ALL in the interests of safety, because significant contamination would be disastrous.

Can I just add a couple of limits that have been mentioned before but worth noting here.

What is the supply and storage chain for this "slurry" Max? Exactly how does this slurry get to the airport? Is it every airport that runs budget airlines does this? One thinks that if it is stored on site it would needed to be constantly agitated to avoid the contents settling. That would involve a storage system that would certainly look unusual. Please remember Max not all airports have similar supply networks. What of those that don't have storage farms? This all adds another extremely complex level of human participation that will be difficult to manage.

The other issue has been mentioned by others on numerous occasions yet entirely ignored by yourself and others Max. You and others present the Welsbach patent as evidence and by your own admission you have stated that Al2O​3 is a Welsbach material. For those that don't know Welsbach materials are those that are used in a Welsbach Mantle i.e. the mantle that is used in a gas lamp. Now Max says he was in the army so he must have used these. They work by taking heat from a flame and converting it to light. But not just a dull glow but they become incandescent. What is often used as a fuel in the military? JP8?

So Max by your own admission a material that glows when heated is then added to fuel and then combusted. Max, there would be some very noticable glowing streaks coming from the engines.
You must log in or register to reply here.