Could some of you take a look at this photo too? Would a bad stitching job also account for this 'levitating' rock? (middle right) http://ufothetruthisoutthere.blogspot.ca/2014/11/debunk-this-one-levitating-rock-on-mars.html 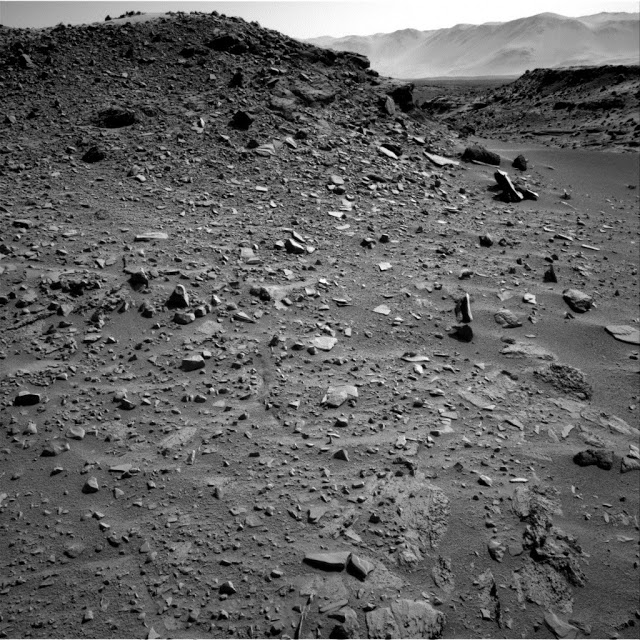 Sagittarius said:
Could some of you take a look at this photo too? Would a bad stitching job also account for this 'levitating' rock? http://ufothetruthisoutthere.blogspot.ca/2014/11/debunk-this-one-levitating-rock-on-mars.html
Click to expand...

It's not a levitating rock. It's a rock behind another, darker, rock, which at first glance might appear to be its shadow. 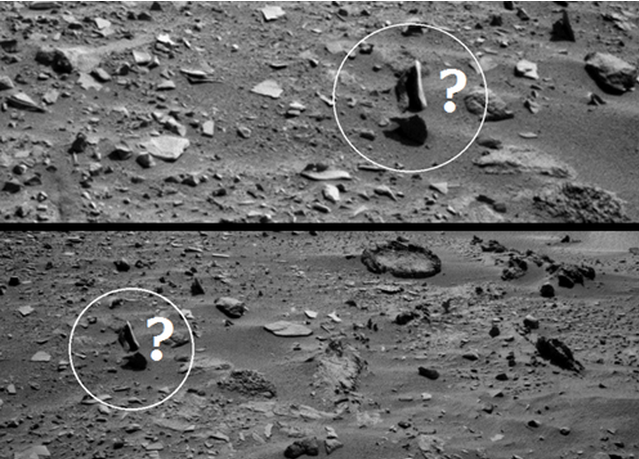 You can clearly see that it is not the shadow of the background rock. Look at the sun direction. If that was a hovering rock, the shadow would be to significantly to the left of the rock as well as in front of it.

Here is an image taken the previous day: http://naturalishistoria.files.word...000e1_dingo-gap-sand-dune-curiosity-rover.jpg

It shows the same rocks but from a different angle. I have created an overlay showing the matching rocks. You can clearly see that the "shadow" is just another rock.

In close-up, with five of the rocks numbered: 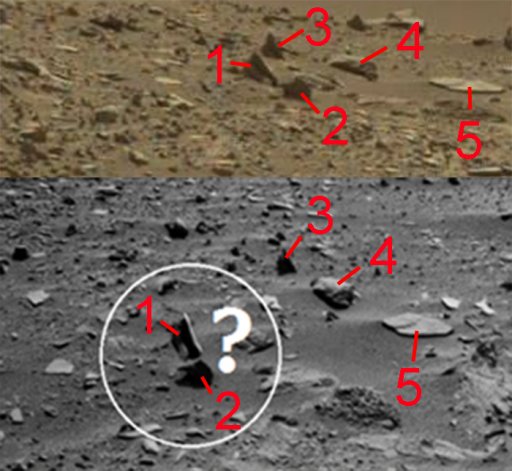 Thanks, Trailblazer. That makes sense. I hadn't noticed the shadow. How do you think the ring formation in the background was caused?

Sagittarius said:
Thanks, Trailblazer. That makes sense. I hadn't noticed the shadow. How do you think the ring formation in the background was caused?
Click to expand... 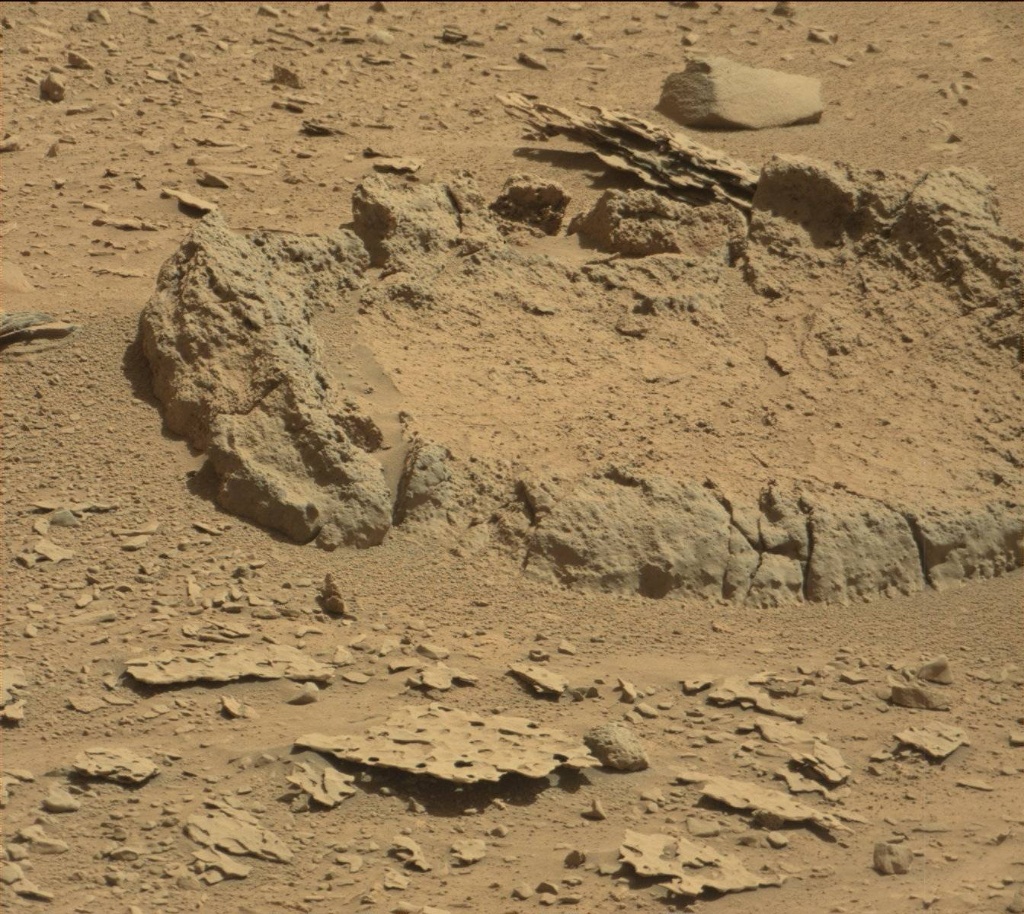 I'm not a geologist, so I'll throw that one out to the crowd. It just looks like a weathered hunk of rock to me! (The "slices of swiss cheese" in the foreground look more interesting, in my opinion - some nice erosion patterns there.)

Wow! You're quick off the mark. Thanks for that! Appreciated!

Staff member
Just an optical illusion, a bit like this "levitating" platform: 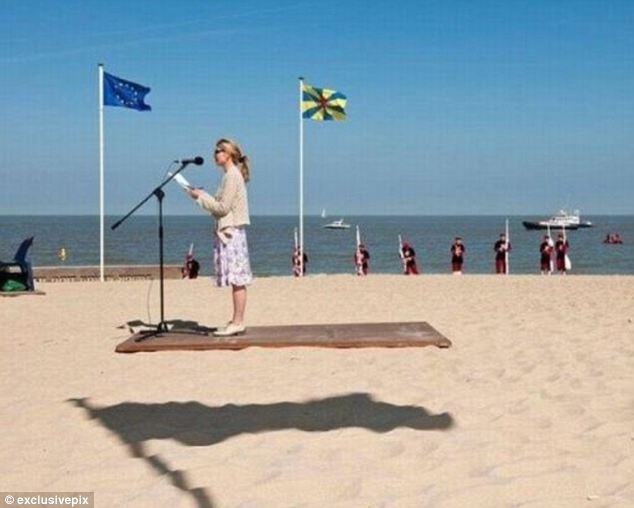 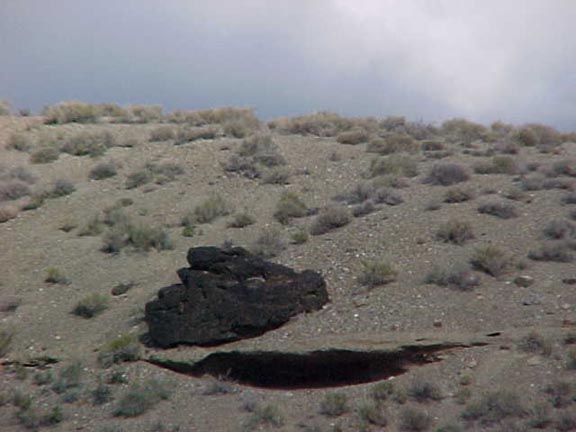 The human brain is just hard-wired to figure things out in 3D with shadows. 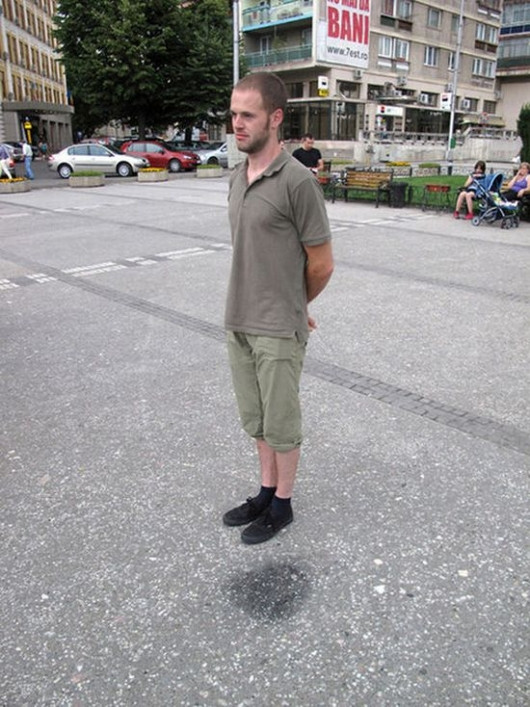 Staff member
The source for the various Mars images,:

Oh, they're funny! Thanks, Mick.

Sagittarius said:
Could some of you take a look at this photo too? Would a bad stitching job also account for this 'levitating' rock? (middle right) http://ufothetruthisoutthere.blogspot.ca/2014/11/debunk-this-one-levitating-rock-on-mars.html

Oh, how I'd love to walk on that landscape - but still be home for afternoon tea, of course! But to walk in that place! Go over those hills, pick up those rocks with one's own hands. It's amazing that we are really there on Mars - a place that was only speculation. Now we see. We actually can see it. And touch it. Amazing.

Flynn said:
Oh, how I'd love to walk on that landscape -
Click to expand...

Well firstly, if you want to live to remember the experience....you're gonna need a pressure suit. Probably similar to the ones used on the Apollo missions, or even now for EVAs in low Earth orbit (for pure vacuum environments)....since the atmospheric pressure on Mars isn't anyway near Earth's, nor survivable by any of our lifeforms.

Here is an interesting video (link to it, rather than posting the thing as an "embed") about the development of the EVA suits, or "space-suits" that occurred as a need, for the ultimate Apollo missions. (**) You can see some similarity to the suits flown on Gemini...but those (though they protected the Astronauts from death) had some major limitations....the umbilical tether, for example....and a severe lack of flexibility. Essentially the Human exists in a "balloon", and has limited mobility (in the Gemini versions).

(**)Adding....the series "Moon Machines" is incredible, and worth a watch!!

Later iterations of suits worked better. BTW? "Some" people try to say that Stanley Kubrick "faked" the Apollo Moon scenes...(I know, this veers a bit off-topic, but is part of the point I am making). ANY person who casually observes the movie 2001: A Space Odyssey[/I]" or the stills that show the actors from that film in their "space suits" can understand how wrong they are....(created by the "Props" Department based on, at the time, the images of Project Mercury pressure suits...NEVER intended to be exposed to actual vacuum of space). The actors are ALSO quite obviously walking in a 1-G environment.

Please also note, in the "2001" clip? (A wonderful masterpiece film, don't get me wrong!!)....but, the Lunar "moonscape" is just wrong!!! Wrong, wrong!! Looks "alien" yes....but not like our actual Moon. This location is supposed to be in the Tycho Crater...hence the designation for the discovery of this artifact as "TMA-1"...Tycho Magnetic Anomaly-1 .

You can search online for actual images of the Tycho Crater, on our Moon.

(More nerdish things...in the "2001" clip above? You can clearly see the "terminator" line on the Moon's surface....this is the line from dark to "sunrise" as the Moon rotates....BUT? The Earth, shown there in background, is illuminated from a different direction!!! So, really....the "Kubrick faked" stuff is just debunked...)
Last edited: Dec 25, 2014
You must log in or register to reply here.